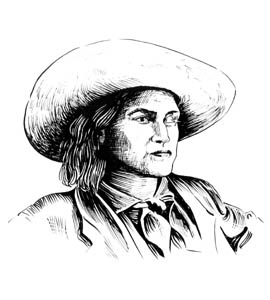 ninetimesthepain replied to your post “A few handicapped badasses”:

But if Charley Parkhurst is a man, you shouldn’t be calling him a princess…

Glad you mentioned this – I specifically listed him to test responses. It’s something I’ve had rattling around in my head for a while. I’m of two minds about it, would like y’all’s feedback.

Part of me – the part that’s winning – knows including a trans man like Charley in a collection of “princesses” would be disrespectful to his disposition and wishes. That he’s out of the bounds of this project.

The other part thinks, if children are going to see this (and I know many teachers and parents have already been selectively sharing it with their wards), could exposure to Charley’s story be in some way beneficial to an assigned-female-at-birth child out there who comes across RP? Would learning about that sort of precedent help someone in figuring out their identity?

I honestly don’t know. I’ve had Charley (and a couple other trans men) on my master list for a bit, unsure what to do with them, if anything. Just as many people have written in asking for me to do entries on trans men as have sent in urging me not to. Curious as to what y’all think. This is pretty damn far out of my wheelhouse.

(and if you’re curious as to the history of One Eyed Charley, missedinhistory did an excellent podcast on him, which you can find right here!)

I think the real question is, are you going to include transgender women in the project?

Already have, at least by most definitions: see Osh-Tisch, Crow bate/two-spirit, whose entry I did last year. I plan to do more – someone suggested 18th century trans woman spy Chevalier d’Eon, which was a startling act of them reading my mind.

That said, determining definitively which historical figures would fall under a specific umbrella is often a bit tricky – even if the person did leave firsthand accounts of their own identity politics (which practically nobody did), said account doesn’t come from the same mental frameworks we use nowadays. Many people wrote in to suggest Elagabalus as a trans woman, but a light inspection indicated there may not be enough textual evidence to firmly support that claim.

As for the rest of the replies: thanks for the responses, and thanks for phrasing them politely. I think almost all of us agree it’s right to keep trans men off the main project, and maybe have a “Rejected Princes”-type spinoff at some point in the future. Thanks for the input!

How to Shut Down an Islamophobe in Six Tweets

For #MuslimWomensDay, I posted a collection of awesome Muslim women on Twitter - and an Islamophobe took exception to that.

Why the Lolita icon?

I was using the Lolita icon for some time as my avatar on Tumblr. I changed that. Here's why.

Fearsome undefeated samurai warrior who was "a match for any god or demon," and is one of Japan's greatest heroines…