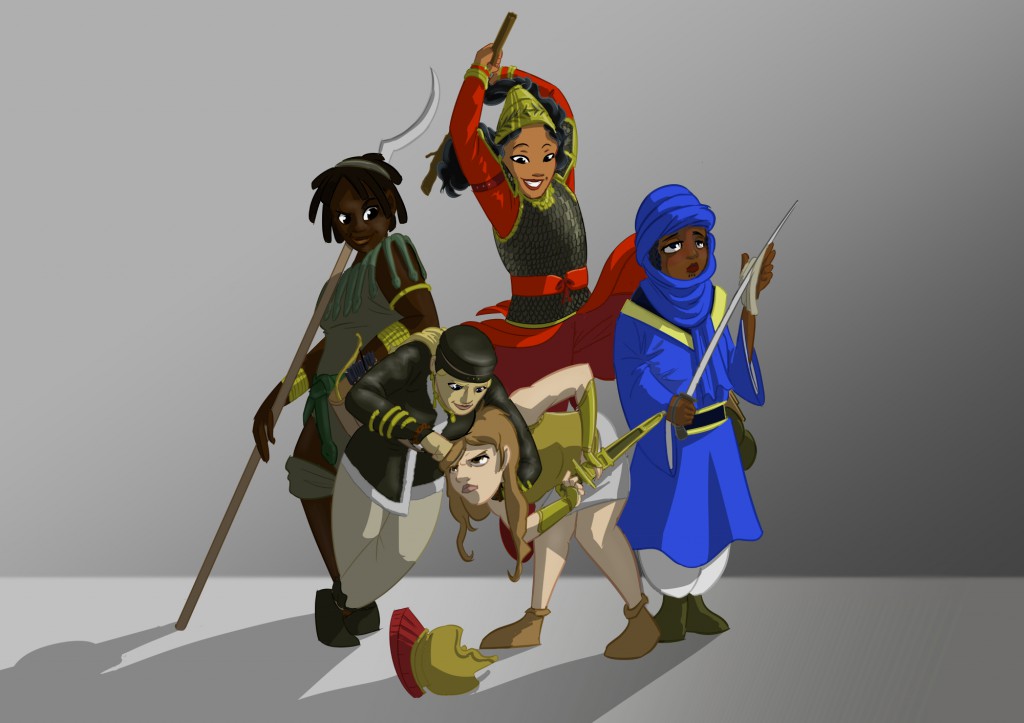 Alright, it’s time! Let’s kick off Amazon Week by introducing the Amazons described in this awesome news story. In clockwise order, from the top, we have: Worthy of Armor, Don’t Fail, Princess, Battle Cry, and Hot Flanks.

Maybe a lot of them don’t look like what you’d expect for Amazons. Yeah, well – let’s talk about that.

I said it was gonna be a short entry this week, without much research… but I couldn’t help myself. Back to actual stories of individuals next week. I just found this super interesting!

Most likely, what you know about Amazons is from Greek mythology. They show up in the stories of Hercules, Bellerophon, Theseus, the Trojan War, as well as a ton of frescos, vases, and assorted art. The standard depiction is a bunch of one-breasted women warriors who live in a society without men. The legend goes that they maintain their numbers through either kidnapping (kids or sex slaves) or, once a year, they go find some dudes, and get pregnant. They live in a place called Themyscira which is just a month’s days journey wave-over-in-some-vague-direction-towards-the-Black-Sea.

The ancient Greeks loved the idea of these ladies. Problem is, the idea is kind of where they stopped. Most of the tellings basically boiled down to, “Man these gals are so badass! Wait, an actual man just showed up! Oh, and he killed like, all of them. And took a couple as sex slaves. Um. But they’re still badass, really!” In the telling of the Trojan War, the Amazon Queen Penthesilea even shows up to fight and immediately gets killed – only for her killer to then realize she was a lady and fall in love with her (the ancient Greeks had some fucked up ideas about romance). Despite all this bullshit, the idea of the Amazon is obviously powerful, and remains popular to current day, even if the circus clowns running DC Comics can’t seem to realize that.

But were the Amazons real?

Up until maybe thirty years ago, the answer was, “no, and neither are leprechauns, you lunatic.” Now, though? We’re at a firm “maybe.” (same with leprechauns, actually)

What changed? Well, first off, archaeologists found the graves of a bunch of Scythian warrior women, buried with enough weaponry to take over a small country. The Scythians were a bunch of nomadic warrior-folk whose territory stretched from present-day Ukraine down to the… you guessed it, Black Sea. You may remember a previous entry on Tomyris, Cyrus-decapitating queen of the Massagetae? They were a Scythian offshoot. So now we have actual physical evidence of warrior women — and not just one-offs, either. We’re talking like 1 in 5 graves fit this description.

This got some people – particularly a woman named Lyn Webster Wilde – real interested in giving the search for Themyscira a real shot. Which is where it gets real interesting. She wrote a book about her travels in search of origins for the Amazon myth, and pointed out a couple origin points:

This one we’ve already covered. Right place, right time, right culture, there’s evidence of it. But it only goes back to 9th century BCE or so. The Amazon myths start showing up as early as 11th century BCE, if not before. So there had to be some stuff around before.

When you think Gorgons, you probably think of sculpture aficionado and professional snake-charmer Medusa. Classicists argue (and there’s some evidence to it) that the Gorgons were actually a matriarchal society dating back as early as 15th century BCE. In some Amazon myths (particularly Myrina’s), they’re described as fierce warriors who wear the skins of giant snakes. There’s some speculation that the Gorgons worshipped a goddess of wrath, and the priests wore frightening masks and used mirrors – hence, the other parts of the myth. Wilde argues that the Gorgons were likely located in northern Africa, and that their culture spawned a number of matriarchal societies in years to follow.

If you’re going to look for African matriarchal societies, you need look no farther than the Tuareg people. A nomadic Berber tribe, the Tuareg are known for their shockingly blue robes and women-led approach to sexuality. A 1960 book by Lloyd Cabot Briggs describes courtship festivals where, after the main entertainment settles down, the crowd breaks off into small groups of single women with a handful of admirers each. They laugh and joke for hours, and the young men whisper and write secret messages on the woman’s palm. At the end of the night, she chooses the suitor she wants for the night, and they go as far as she wants sexually. Briggs describes this as a society where women are held in such high regard, they are in no danger of being raped or being forced to go further than the woman wants.

Moreover, the Tuareg people that Wilde meets in her book all claim that their people, in ancient times, had to flee from their old island homeland when it sank into the waters. Concurrently, various Amazon myths (particularly Myrina’s) also have them visiting or waging war against Atlantis. I don’t really know what to make of that, but… there it is.

This is one of the more mind-blowing things I learned about from this book. WAY back in the day — we’re talking centuries prior to the Hercules or Theseus myths — there was, for ten days a year, a secret religious getaway in ancient Greece, called the Elusian Mysteries. Apparently attended mostly by women and focusing on the nature goddesses Persephone and Demeter, the nature of the Mysteries was, perhaps to no great surprise, secret. Even to this day nobody knows exactly what went on there, although some think that the attendees partook of a substance akin to LSD, like a Bronze Age Burning Man. In any event, it was, according to Wilde, inherently female-focused and extremely important to Greeks around the 15th century BCE.

There’s more, but you get the idea – lots of female-friendly cultures in ancient times.

So what happened to all of these old matriarchal cultures? The Dorians did.

The Dorians make up a lot of what we think of as ancient Greek civilization. They were an ethnic group that more or less ran things in Greece and brought in the Heracles (Hercules) myth. Wilde argues that if you take the myths about Perseus killing Gorgons or Hercules killing Amazons as abstractions for actual stories of conquest, you get that the Dorians basically just steamrolled through a bunch of old matriarchal cultures, making up stories along the way about how ugly or weak or smelly they were. These were, it should be noted, the same chuckleheads who changed the story of Europe to that of Pasiphae. Over centuries of retelling, the argument goes, these female cultures got consolidated into the idea of the Amazon, who was a Strong! Female! Character! — but one that fell apart as soon as a man actually showed up. Bleh.

Oh boy, the research that went into this! Okay, here we go:

Worthy of Armor (top, in red)

She’s wearing royal Scythian armor (not dissimilar to the outfit that Tomyris is depicted in, but with more metal and less leather). Her cap is this peculiar piece of headwear that you see a lot in old depictions of Amazons. It’s basically a funnel that you pull hair through on the top, and have out like a ponytail. The laurels of victory are painted onto it. Also, normally she’s be wielding a sword, but since they’re all just roughhousing, I gave her a stick to beat people with.

She’s dressed in traditional Tuareg garb, and has very light face paint. I imagine her to be kind of bored with the constant roughhousing.

The stereotypical depiction of Amazons in classic Greek and Roman art. Everyone has seen this sort of outfit a hundred times before, so she’s more obscured than the others.

This is based off of a sketch in Wilde’s book, a reconstruction of the clothes they found in one of the Ukrainian Scythian graves. Leather jacket, gold bracers, and only one earring (to show she didn’t have children). Also note her bow, arrows, and quiver, attached to the screen-left hip.

She’s a mix of Gorgon symbolism and the Dahomey Amazons. Since Medusa was always described as having hair made of snakes, I thought it might be cool to put the snakes in her costume instead, and give her dreadlocks (since the Gorgons were African).

Anyway, I hope you like the picture. It makes me giggle every time I see it.

I’ll be posting up probably two galleries’ worth over the next couple days, culminating with my own personal Amazon early next week. Thanks to everyone who sent in stuff! And if you’ve been sitting on something half-finished, just send it to me ASAP.

NEXT WEEK ON REJECTED PRINCESSES

Thanks for sticking with me on two non-research-heavy weeks – been in a bit of a holding pattern while we figure out which entries are book-only and which ones aren’t. But next week we’re back to awesome stories! So here’s your hint:

(please send in guesses via this form!)

A reader took the Amazon Week illustration from a bit ago and started a Dungeons and Dragons campaign with them as characters. I can die happy now.

The finale to the "make your own amazon" fanart bonanza! Meet White Clouds, Lover of Literacy, Bad At This, and more!

Although her tribe was destroyed and she was forced into an unwanted marriage, this indomitable woman came to run the world's largest empire - with a woman as her companion.

This unassuming middle-aged woman became one of Britain's most notorious terrorists in her unyielding quest to win women the right to vote.