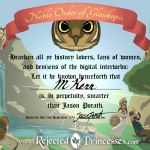 Time for another round of Nog Prizes! (confused as to what this is? explanation here)

Did you draw out the nog price because if you did may I suggest on Athena’s shield instead of a owl head which has never been put on her shield(those were her earrings that were owls) having Athena’s shield aegis which had an imprint of Medusa’s head so that it is more accurate.

D’oh! You are correct. Fixed! Although the previous entries (one, two) still have the old owl shield. They’re vintage!

By that description, your next entry must be ÉtaÍn, although I simply must object to your calling it a fairytale. “Tochmarc ÉtaÍne” is a part of the mythological history of Ireland that, among other things, lays connections between the displaced Tuatha Dé Danann and the invading Sons of Míl. I’m sure it was not intentional, but referring to the story as a fairytale (connoting total fantasy) instead of a part of a larger mythological cycle (connoting pseudo-history) can be considered offensive.

Not only did M Kerr figure out from the previous week’s hint that I was talking about Etain, and not only helped correct my terminology around the entry, but also furnished an incredible amount of doctorate-level information about Etain and Irish mythology. The post is a lot more thorough thanks to the information provided — so thank you!

D’ahh, you’re right! I was low on sleep, I have no idea how, in the Tomyris entry, I’d conflated Xerxes and Cyrus — other than they kind of sound similar, they were related to one another, and ruled around the same time in the same place. Still, my bad! I corrected the entry before it was up for very long, but that was a dumb error on my part.

I’ll have another Nog Prize to give out soon, but that will require a bit more of a writeup.