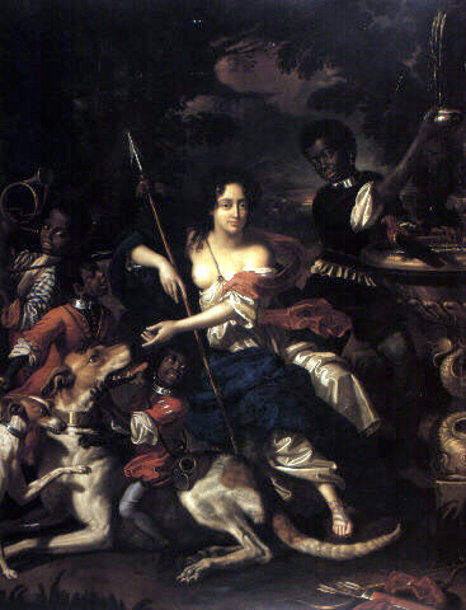 I wrote a short piece for MedievalPOC — a great resource for people of color in medieval art — about a piece I found in my research. Meet Hortense Mancini:

This is a portrait of Hortense Mancini called Duchess Mazarin Dressed as Diana. It is a large oil painting (90 x 70”) made by Benedetto Gennari in London in the late 1670s. From my primary source: “Unlike Diana, she is surrounded not by nymphs, but hunting dogs and four dark-skinned boys dressed as pages.” The oldest page is thought to be her longtime confidant and servant Mustapha, who had likely come to Savoy (where he’d met Hortense) from North Africa in one of the pirate raids off of the Mediterranean Coast.

Hortense herself, although not a POC, is quite an interesting figure. Betrothed to an incredibly insane and abusive man (he refused to let maids milk cows because it was too sexual), she left him and spent the better part of a decade on the run before settling in London. She had a bewildering array of lovers, both male and female – most notable of whom was likely King Charles II. She is one of the first French women to pen a memoir under her own name, which she did to set the record straight and take control of her own image. She was considered one of the leading feminist icons of her day for demanding a divorce, and led a great many other women to do so as well.

Bonus fact: Hortense was tossed into a convent by her husband early on, where she ran into her childhood friend Sidonie (some say they were lovers, but I can’t verify that).The two proceeded to terrorize the nuns – noisily racing greyhounds up and down the halls at night, dumping ink into the water, flooding the nuns’ beds, and climbing up chimneys. It would be but one of innumerable convents and fortresses that she would escape throughout her life.

All that before we even start talking about her sister Marie…!

Who knows, there may be a full-fledged RP entry on Hortense and Marie some day…! *whistles*

A photographer for Reuters covering protests in Macedonia captured a moment to make you smile.

Picasso's granddaughter Takes on Art World on Her Terms

Shaughnessy leads the team that helped discover six of the elements of the periodic table.

16-year-old high school junior Holly Neher became the first female quarterback in her school, and possibly all of Florida, to throw a touchdown pass.