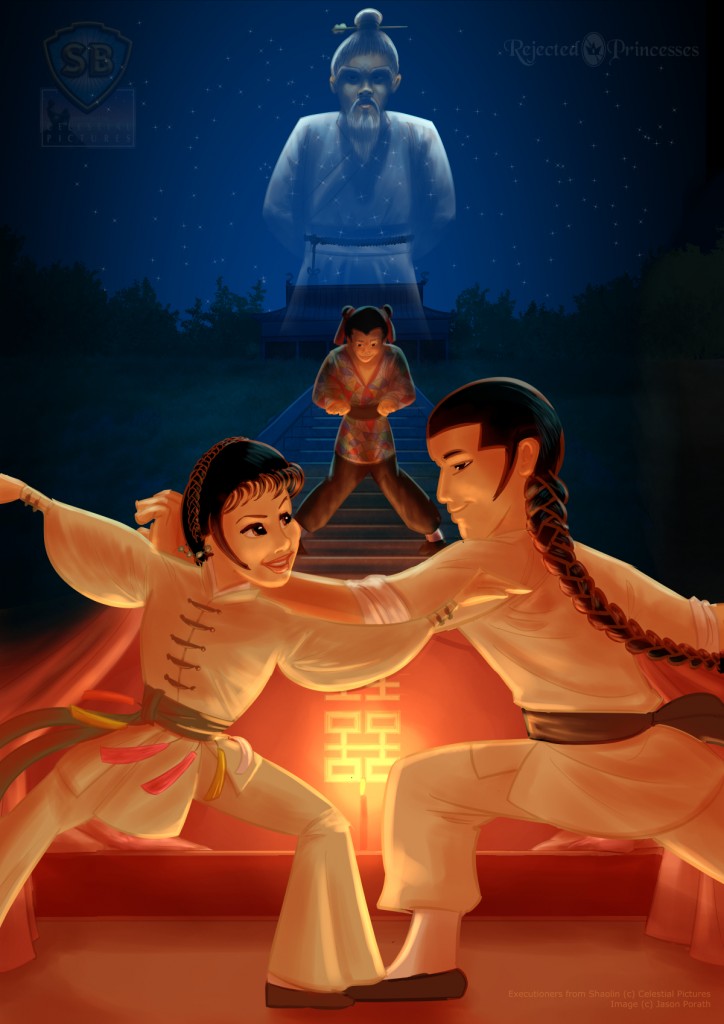 Watching Executioners from Shaolin is like witnessing cinema from an alternate dimension. One where humanity never had a binary gender division, or at least overcame it sometime in the 1970s.

The plot starts in pretty standard manner — evil martial arts master kills good martial arts master, dead master’s students swear revenge. Except the evil master is none other than ol’ White Eyebrows himself, Pai Mei, in his debut appearance. Probably best known today as the cruel teacher in Kill Bill Vol. 2, Pai Mei showed up in tons of martial arts movies. And why was he so notable as to command repeat appearances? Among other things, because of his iron crotch technique.

That’s not a typo. In the introductory fight, Pai Mei defeats his opponent when the good master kicks him in the crotch — only to find that Pai Mei has ridded himself of this vulnerability by sucking his own balls up into his body. Pai Mei then traps the prone master’s foot in the murky nethers twixt his legs, and drags his opponent around while growling wildly.

This happens in the first three minutes. And it is a key plot point.

The movie’s views on gender get another wrinkle when we meet our heroine, Yongchun. A traveling martial arts performer, Yongchun quickly proves herself a match for the protagonist (Xiguan, a man’s man who is one of the aforementioned revenge-seekers). In almost no time at all, the two earn each others’ respect, fall in love, and decide to marry. The movie then spends an uncomfortably extensive amount of time meditating on the conflict between her “male” and “female” characteristics. She’s simultaneously an aspiring mother with a romantic heart and a completely unstoppable asskicker — a fact she has to repeatedly display to Xiguan’s snickering friends, who harass her about becoming a submissive wife. To his credit, Xiguan realizes her distress and chases off his friends, supporting her gender duality over the toxic macho stereotypes his friends were espousing.

And then things get weird.

If it seems a little odd to you that Yongchun’s superpower is to keep her legs shut, brace yourself, because it gets much odder as Yongchun passes down her superpower to their son, Wending. The son (yes, Xiguan eventually beats her locked-legs challenge) is an even mix of male and female traits. He’s strong and good at martial arts, but also dresses like a girl and practices his mother’s Crane style of martial arts, which the local kids call “kung fu for girls.” Calling Wending a sissy, the kids proclaim “nobody can tell if you’re a boy or a girl.”

All of this comes full circle when it comes time to bring the fight back to Pai Mei. Without spoiling much, it is shown that Xiguan’s inflexible Tiger style is not enough to defeat the evil master, and neither is pure Crane style. It is only an even blend of Tiger and Crane, of masculine and feminine energies, that is able to overthrow the sometime eunuch and his boobytrapped loins. The rigid gender roles embodied by Xiguan prove incapable of success — Yongchun and Wending prove themselves the missing puzzle pieces.

Executioners from Shaolin clearly struck a chord with moviegoers. In the years to follow, the movie itself would be remade in various contexts, often with even bolder plays on gender. 3 years later, Clan of the White Lotus, a sequel/remake to Executioners from Shaolin staged an entire fight scene with Pai Mei naked in a bathtub, and required the protagonist to learn how to sew in order to win. Other martial arts films copied Pai Mei’s inner-crotch technique almost verbatim, including, I’m told, the Stephen Chow-starring Royal Tramp. Come 1992, Swordsman II featured an antagonist who’d gone so far as to castrate himself to magnify his martial arts powers. While one can’t claim that all of these have anything approaching progressive gender views, you can see how Executioners from Shaolin spread its influence[2. To be fair, Swordsman II is based on a novel that predates Executioners from Shaolin, but I would still argue it owes a debt to this movie.]. And that’s before even getting into the pseudo-historical character of Pai Mei, popularized here and given roles across any number of martial arts movies.

Even decades later, it’s a captivating movie – while I was watching it, various friends walking by stopped everything they were doing, transfixed by what was happening onscreen, and watched with me to the end. It’s not perfect: Yongchun is given tragically little to do later in the movie, the ending is startlingly abrupt, and some of the martial arts on display are so peculiar as to elicit laughs, but there’s plenty to like regardless. The fights are well choreographed, particularly an early one featuring a doomed student played by a young Gordon Liu (who would go on to play Pai Mei in Kill Bill Vol. 2). And honestly, I found the love story, occasionally problematic as it was, surprisingly charming.

Executioners from Shaolin can be found at www.itunes.com/shawbrothers and at www.hulu.com/companies/shaw-brothers

This audacious black gangster fought the Italian mob for control of Harlem and won, taunting them in full-page newspaper ads as she went.