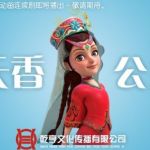 Chinese Government Tries to Quell Unrest with an Animated Princess

Historically, China has been ruled by the dominant Han ethnicity. But in the country’s western regions, there are many Islamic groups with a different ethnic heritage — their ancestors likely came from various parts of the middle east over 1500 years ago, and they have been uneasily assimilated into Chinese society ever since. In the early twentieth century, Soviet leaders dubbed these many different groups “Uighurs,” naming them after a vanished tribal society that once aided the Chinese in quelling the deadly rebellion of the short-lived Yan Empire during the middle ages.

Writing in the New York Times, Edward Wong explains the backstory of how the animated tale of Princess Fragrant came to be made:

She is the Han vision of a Disney princess transplanted to Xinjiang. Animators in the southern Chinese city of Shenzhen are creating a 104-episode cartoon series loosely based on a historical Qing Dynasty imperial consort, the Fragrant Concubine, a Uighur woman who is shrouded in myth. Working under contract with the government of the oasis city of Kashgar, the site of occasional violent episodes, these animators have said their aim is to paint a portrait of ethnic harmony and paper over bloody conflicts in Xinjiang.

The plot of the series, which is expected to be broadcast in 15-minute-long episodes over two seasons, follows the adventures of Princess Fragrant, her brother and their ethnic Han and Kazakh friends as they travel across Xinjiang to rescue the princess’s father from the clutches of a greedy Western explorer.

Awesome to see some Uighur representation, and that the Chinese government is at least AWARE of their culture, even if appears as a left-field, possibly tonedeaf sort of move. I will say, though… the fact that her name translates to Fragrant Concubine does make me giggle.