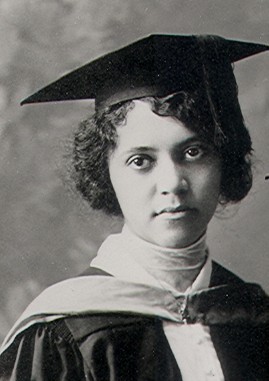 Leprosy (Hansen’s disease) is so rare nowadays as to be a joke punchline, but a century ago it was anything but funny. A diagnosis of leprosy would make you a pariah at best, and kill you at worst. Lepers in Manila, for example, were made to carry around bells announcing their presence, so people could avoid them. Many of the afflicted, quarantined into ramshackle treatment centers, spent their days wishing for a cure.

To their aid came an unordinary helper: chemist Alice Ball (1892-1916), the first woman and first African American master’s graduate from the University of Hawaii.

Having graduated top of her class from both high school and University of Washington (where she earned bachelors in both pharmaceutical chemistry and pharmacy), in Hawaii she began investigating the chemical properties of chaulmoogra oil. The oil had previously been used in leprosy treatment to mixed results, but she managed to isolate the effective ingredients. This led to a new regimen of injection-based medicine that became the de-facto treatment for over two decades.

She died tragically early, at the age of 24, which unfortunately led to her life being overshadowed by some shady business. The main suspect for her death is chlorine poisoning that occurred during teaching (she was also a professor!), but even that is subject to debate – for unknown reasons, her original death certificate was altered, stating she died of tuberculosis.

But the main disgrace that was to dog her legacy was that she was not given credit for her work. The “Ball Method” of treatment only proved popular for about a year, until it was re-coined the “Dean Method” by University of Hawaii president Arthur Dean, who completed the work after her death. Despite one of her collaborators protesting that Dean had done virtually no work on the cure, she was all but forgotten until the late 1970s, when University of Hawaii professor Kathryn Takara began investigating her life and reestablishing her legacy.

She has since been honored by her alma mater with a plaque on the school’s only chaulmoogra tree and the school’s highest honor, the Regents Medla of Distinction. Moreover, Hawaii’s Lieutenant Governor designated February 29th “Alice Ball Day” – a rare day for a rare woman.

When her kid was stolen from her, this ex-slave successfully sued to get him back; she then went on to become a forceful speaker for abolition across the United States.