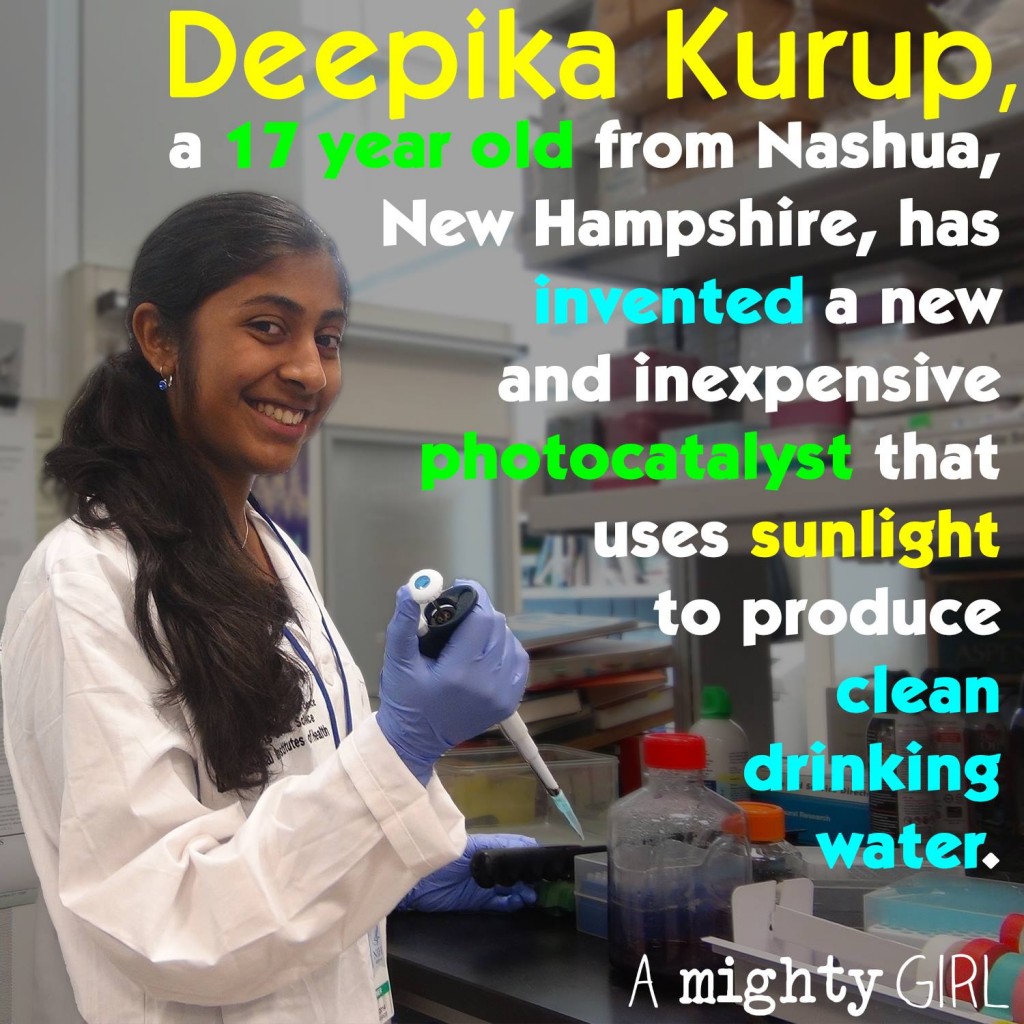 On family trips to India as a child, Deepika Kurup often saw kids like herself forced to drink dirty water — as a result, at age 14, this Mighty Girl became determined to find to a way to ensure that everyone has access to safe drinking water. For an 8th grade project, the Nashua, New Hampshire teen invented a water purification system that uses a photocatalytic composite and sunlight to clean water — an invention which earned her recognition as America’s Top Young Scientist in 2012. Three years later, the now 17-year-old scientist has spent several years improving her purification system and is currently one of the finalists for the 2015 Google Science Fair!

According to Deepika, access to clean water is a global crisis; “one-ninth of the global population lacks access to clean water,” she explains “and 500,000 children die every year because of water related diseases.” On the trips to India, her immigrant parents’ native land, Deepika saw the struggle for clean water first hand: “[My parents] would have to boil the water before we drank it. I also saw children on the streets of India… take these little plastic bottles and they’re forced to fill it up with the dirty water they see on the street. And they’re forced to drink that water, because they don’t have another choice. And then I go back to America and I can instantly get tap water.”

Her early investigations into water purification methods found that many of them were expensive and potentially hazardous. “Traditionally, to purify waste water, they use chlorine, and chlorine can create harmful byproducts,” she points out. “Also, you have to keep replenishing the chlorine, you have to keep putting chlorine into the waste water to purify it.” She wanted to invent a new way to clean water that would be both cheap and sustainable.

Deepika came up with the idea of using a photocatalyst — a substance that reacts with water’s impurities when energized by the sun — that also filters the water. The combination of the reaction and the filtration can remove most contaminants for a fraction of the cost of chlorine purification. She determined that her system reduces the presence of coliform bacteria by 98% immediately after filtration and by 100% within 15 minutes. Another advantage is that her catalyst is reusable: “a catalyst doesn’t get used up in the reaction,” she says. “Theoretically you can keep using my composite forever.”

Deepika’s efforts have already by widely recognized — in addition to being named America’s Top Young Scientist in the Discovery Education 3M Young Scientist Challenge, she was also the recipient of the 2013 President’s Environmental Youth Award and the 2014 U.S. Stockholm Junior Water Prize, and she was named one of Forbes Magazine’s 2015 “30 Under 30 in Energy.” She’s also excited to meet the other finalists at next week’s Google Science Fair’s Finalist Ceremony — even if it means missing a few days of classes at her new school, Harvard University, where she plans to study neurobiology. Most of all, she’s looking for forward to taking her research from the lab to real life: “It’s one thing to be working in a lab, doing this, and another thing to actually deploy it and see it working in the real world. So that’s one of my steps in the future.”

The first female mathematician in recorded history, and one of the luminaries of the ancient world - but her grisly death at the hands of a mob was only the start of her troubles.