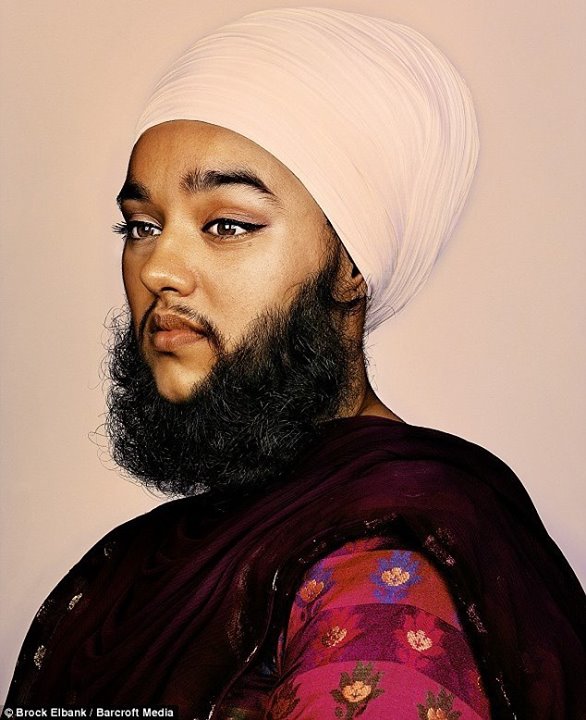 via A Mighty Girl:

23-year-old Harnaam Kaur has polycystic ovary syndrome, an endocrine disorder which often causes male pattern hair growth in women. Harnaam, who is from Berkshire, UK, began to experience significant hair growth by age 11 and teasing soon followed. As the bullying grew more intensive and classmates began calling her “beardo” and “sheman”, she began to self harm and even considered taking her own life.

When she was baptized as a Sikh at age 16, Harnaam decided to adhere to the traditional Sikh tenet against hair removal. Her parents were opposed to the decision, concerned about her ability to have a normal life; however, she was determined. As Harnaam explained to HuffPost, “I wanted to make my own decisions and live for myself – not anyone else. I’d had enough of hiding. I’d had enough of the bullying and the self-harming and the suicidal thoughts. I wanted to change my whole outlook on life.”

Since making the courageous decision to live life as she chooses, Harnaam says that her confidence has soared. She even decided to recently participate in a photography exhibit, Project 60, celebrating the world’s best facial hair. In speaking about the exhibit, which marks the launch of Beard Season, a non-profit organization focused on skin cancer awareness, Harnaam stated, “It’s incredible to be the only bearded woman among all these men. It makes me feel really strong… When I first started growing my beard it was for religious reasons but as the years have gone by I’ve kept it for more personal reasons. It makes me feel like a brave, confident woman who isn’t afraid to break society’s norms.”

“All that matters to me at the moment is that I love myself,” she explained. “I love my beard and all my other little quirks – my tattoos, my scars, stretch marks and blemishes. I want other women to find the strength that I have. If I had any message it would be to live the way you want – it’s your journey and it’s your life.”

Harnaam’s photo for the exhibit by photographer Brock Elbank is below. To view several more photos from the exhibit on The Guardian, visithttp://bit.ly/1r099sK

(thanks to Brian Davis for sending this in – via the stellar A Mighty Girl!)