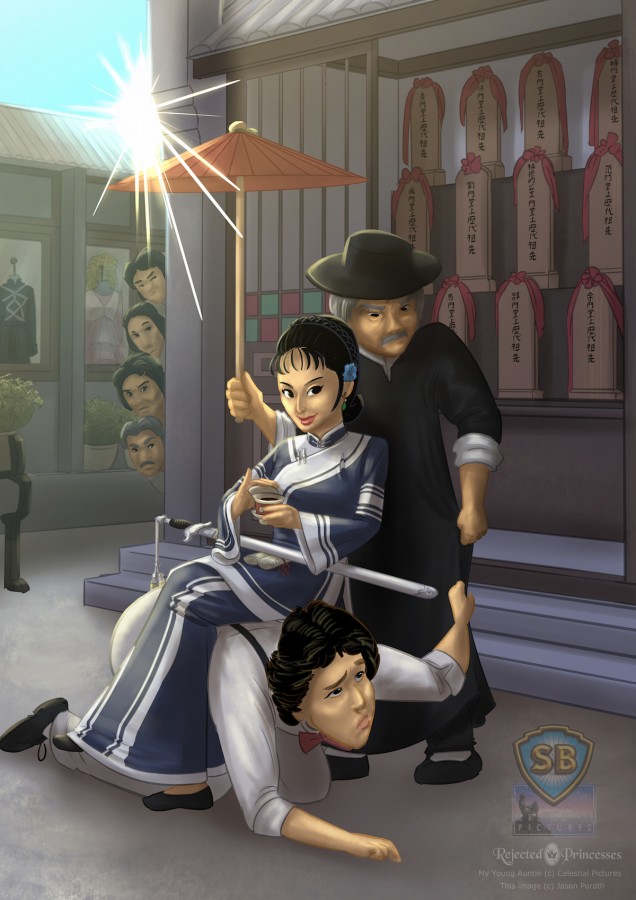 It’s an age-old question: what happens when you mix a screwball comedy, a fish-out-of-water story, and a hysterically overpowered martial arts heroine?

Here’s the setup: the titular “young auntie,” Cheng Tai-Nan, is, through wacky circumstances, installed as a family’s elder matriarch… despite being incredibly young. She takes to the part with glee, dressing in dowdy old outfits and demanding the deference her “seniority” should bring. This brings her directly into conflict with her cosmopolitan grand nephew, who, being the same age as her, tries to drag the provincial Cheng, kicking and screaming, into the 20th century.

Oh, and she’s a kung fu master with a hair trigger. And she ends up beating the crap out of a lot of people.

What unfolds is a joy to watch. She wins fights without even standing up. She learns to walk in heels by starting a street brawl. She trains a cadre of old men dressed like Chippendale’s dancers into fighting shape. She’s running the show for almost the entirety of the movie.

One of the first movies to lead the 1980s push towards Hong Kong comedy/action hybrids — inspiring the likes of Stephen Chow and Jackie Chan — My Young Auntie is a film that stands at a crossroads. Not only does it straddle both action and comedy, but it also exists at the intersection of East and West. The conflict on display here, with Hui’s traditional auntie character against the Westernized nephew, would be remixed just 2 years later in Lady is the Boss. In that spiritual sequel, Hui plays a modernized character at odds with traditional values, inverting her role here.

The weird hybrid of East and West gives the film a goofy, unique character that undoubtedly reflects some of the historical Hong Kong search for identity. The characters spout off “chinglish” and make silly Cantonese/English puns that don’t always translate well. In a mid-movie masquerade sequence, the characters display a hysterically patchy knowledge of Western culture, as if cribbed from a Cliffs Notes book on Europe missing half its pages. It’s charming and odd.

The movie’s endearing quirkiness and the sheer indomitable presence of Kara Hui’s titular auntie are what will ultimately make or break this movie for the average viewer. The plotting is thin, the occasional bits of fan service are offputting, and the pacing of the fights at the end is exhausting. Most frustratingly, for the climactic final battle — a barn-burner of a scene that Asian Movie Pulse lists as the #2 Fight Scene of all time — Hui’s auntie is sadly sidelined from any participation whatsoever, despite being at the heart of virtually every fight in the entire movie prior to that.

Regardless, it’s a fun, disarmingly unique movie that influenced some of the best of the genre. Worth a peek. It can be found at www.itunes.com/shawbrothers and at www.hulu.com/companies/shaw-brothers

As a fun aside, the ancestor markers on screen right of my illustration are all references to different Shaw Brothers movies (save one, which is a reference to Rejected Princesses). See if you can figure out which one is which!