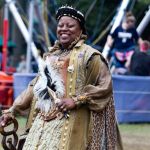 This is Maria Christian, my former cast director at the Michigan Renaissance Festival as her character, Princess Isaade M’boukou. Maria’s been designing and wearing African-Elizabethan fusion garb to MiRF for decades, so she has a few different gowns and headpieces in rotation. In addition to her duties keeping the stage acts organized, as Isaade she acts as an impresario at the feasts, talks about West African traditions and folklore, and is much needed and treasured PoC representation on the cast.

That is one awesome outfit.