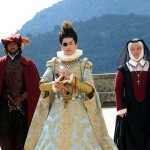 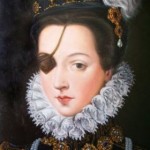 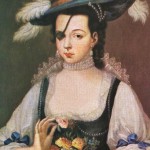 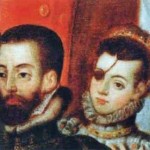 Came across one of these portraits in my research and it stopped me cold. This is Spanish princess Ana de Mendoza y de la Cerda. You may notice that she is missing an eye. Maybe you’re even wondering why! Well, the truth is, nobody knows for sure – most think it was a childhood fencing accident.

The princess herself was a spirited lass, well-liked and considered quite beautiful. She was pretty stylish, and even had different eyepatches to match her outfits.

She had a pretty good life, but it took a turn after her husband’s death. She ended up in a convent for a couple years, where she was known as The Princess Nun. After that, she was caught up in court politics and imprisoned on charges surrounding the loss of state secrets, despite seemingly not being involved much at all. She died in jail 13 years later, at the age of 51. Bummer.

She’s been the subject of a number of movies, one of the most recent of which was the 2008 Spanish film “The Conspiracy” (from which the photo with the nuns was taken).

And yes, she is holding a monkey in that picture. A monkey with a neck ruff. This was apparently a thing. In my research, I have come across no fewer than five European princesses who owned monkeys.

More info (lots of it) here!