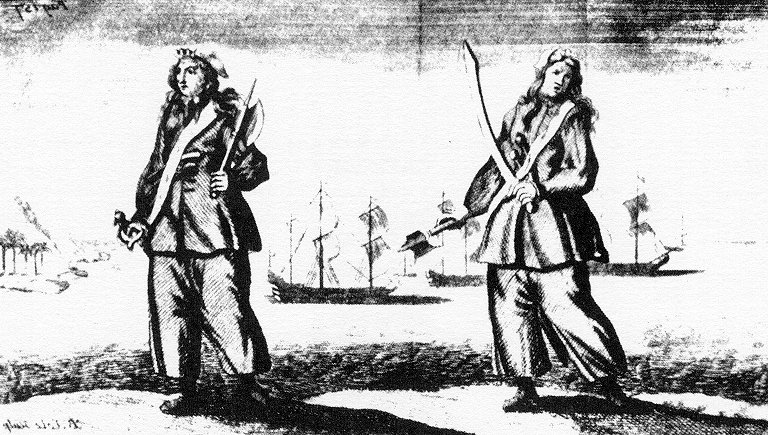 The bolded sections represent quotes from the criticism he received. All the z-snaps are in order.

Your characters are unrealistic stereotpyes of political correctness. Is it really necessary for the sake of popular sensibilities to have in a fantasy what we have in the real world? I read fantasy to get away from politically correct cliches.
God, yes! If there’s one thing fantasy is just crawling with these days it’s widowed black middle-aged pirate moms.

Real sea pirates could not be controlled by women, they were vicous rapits and murderers and I am sorry to say it was a man’s world. It is unrealistic wish fulfilment for you and your readers to have so many female pirates, especially if you want to be politically correct about it!

First, I will pretend that your last sentence makes sense because it will save us all time. Second, now you’re pissing me off.

You know what? Yeah, Zamira Drakasha, middle-aged pirate mother of two, is a wish-fulfillment fantasy. I realized this as she was evolving on the page, and you know what? I fucking embrace it.

Why shouldn’t middle-aged mothers get a wish-fulfillment character, you sad little bigot? Everyone else does. H.L. Mencken once wrote that “Every normal man must be tempted at times to spit on his hands, hoist the black flag, and begin slitting throats.” I can’t think of anyone to whom that applies more than my own mom, and the mothers on my friends list, with the incredible demands on time and spirit they face in their efforts to raise their kids, preserve their families, and save their own identity/sanity into the bargain.

Shit yes, Zamira Drakasha, leaping across the gap between burning ships with twin sabers in hand to kick in some fucking heads and sail off into the sunset with her toddlers in her arms and a hold full of plundered goods, is a wish-fulfillment fantasy from hell. I offer her up on a silver platter with a fucking bow on top; I hope she amuses and delights. In my fictional world, opportunities for butt-kicking do not cease merely because one isn’t a beautiful teenager or a muscle-wrapped font of testosterone. In my fictional universe, the main characters are a fat ugly guy and a skinny forgettable guy, with a supporting cast that includes “SBF, 41, nonsmoker, 2 children, buccaneer of no fixed abode, seeks unescorted merchant for light boarding, heavy plunder.”

You don’t like it? Don’t buy my books. Get your own fictional universe. Your cabbage-water vision of worldbuilding bores me to tears.

As for the “man’s world” thing, religious sentiments and gender prejudices flow differently in this fictional world. Women are regarded as luckier, better sailors than men. It’s regarded as folly for a ship to put to sea without at least one female officer; there are several all-female naval military traditions dating back centuries, and Drakasha comes from one of them. As for claims to “realism,” your complaint is of a kind with those from bigoted hand-wringers who whine that women can’t possibly fly combat aircraft, command naval vessels, serve in infantry actions, work as firefighters, police officers, etc. despite the fact that they do all of those things– and are, for a certainty, doing them all somewhere at this very minute. Tell me that a fit fortyish woman with 25+ years of experience at sea and several decades of live bladefighting practice under her belt isn’t a threat when she runs across the deck toward you, and I’ll tell you something in return– you’re gonna die of stab wounds.

What you’re really complaining about isn’t the fact that my fiction violates some objective “reality,” but rather that it impinges upon your sad, dull little conception of how the world works. I’m not beholden to the confirmation of your prejudices; to be perfectly frank, the prospect of confining the female characters in my story to placid, helpless secondary places in the narrative is so goddamn boring that I would rather not write at all. I’m not writing history, I’m writing speculative fiction. Nobody’s going to force you to buy it. Conversely, you’re cracked if you think you can persuade me not to write about what amuses and excites me in deference to your vision, because your vision fucking sucks.

I do not expect to change your mind but i hope that you will at least consider that I and others will not be buying your work because of these issues. I have been reading science fiction and fantasy for years and i know that I speak for a great many people. I hope you might stop to think about the sales you will lose because you want to bring your political corectness and foul language into fantasy. if we wanted those things we could go to the movies. Think about this!

Thank you for your sentiments. I offer you in exchange this engraved invitation to go piss up a hill, suitable for framing.

Here follows is a non-comprehensive list of historical female pirates and sailors, women of color first:

A post about handicapped badasses spurs a frank discussion about the possible inclusion of transgender men in Rejected Princesses. In the end, the decision is "no" - as it should be.

In which Jason's life is eaten up by the move from hell.