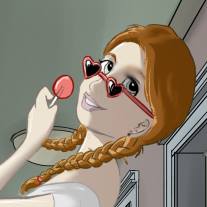 I’m curious about the decision behind using the classic Lolita iconography as the Rejected Princesses icon [on Tumblr]. Was there a specific reasoning there?

I’ve mentioned it in interviews before, but Lolita was the first entry I ever did, back when this was a silly lark spun up out of a lunchtime conversation. Early on, I did little to no research, and half the entries were little more than jokes. Out of the first twelve I did, I liked the art on Lolita the best, and thought it made the best icon, so I kept it – simple as that. After that, I kept the icon mostly so that people wouldn’t get confused by an icon change. People looked at it and thought I was female, and I thought that was great.

Obviously, the project’s changed pretty significantly since then. I certainly wouldn’t do a Lolita entry now – there’s nothing to that entry but dark humor. I’m not taking it down, because it’s important to me to show that people’s attitudes can change (in this case, mine). I didn’t come out of the womb as a feminist historian, I didn’t get shit right for the first year or so – it was a process. Erasing that history doesn’t do anyone any good.

I quietly hope that showing that I’m an imperfect person who’s slowly improving will do something to combat the spread of the Internet’s favorite game, Perfect or Hitler (the game where you’re perfect… or you’re Hitler!). I’m under no illusions that it will, but I live in hope.

All that said, the two year anniversary of RP was yesterday, and I figure at this point an icon change won’t totally confuse everyone, so here you go, the new icon:

A post about handicapped badasses spurs a frank discussion about the possible inclusion of transgender men in Rejected Princesses. In the end, the decision is "no" - as it should be.

Why have "evil" princesses?

Some have questioned why I write about brutal and morally reprehensible people, instead of just focusing on good role models. I have thoughts on the matter.

Your next hint! Plus: talks I'm giving!

RP returns Wednesday! Your hint is contained within.

When some scrubs hit on her, she burnt them alive. When a king slapped her across the face, she obliterated his kingdom. Sigrid the Haughty was not to be messed with.