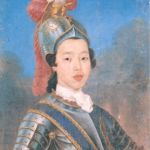 It’s a legend, you ignorant fucks. No one knows whether there is any historical basis whatsoever. And it’s not nearly as glorious a legend as you’d think from looking at that one picture.

Oh, she was a real person. If you read the link (and the links at the link like so-(Mungello p 68, 69), you’ll notice I get into the documentation and how her story has been used and told from diverse perspectives. Just because there are legends about Napoleon Bonaparte or Genghis Khan, doesn’t make them nothing but legends.

I think your response says a lot about the point I’m trying to make here, though. Are we ready as a culture for Abraham Lincoln, Vampire Hunter…but not Xiang Fei?

Sold into sexual slavery to Hernan Cortes, this maligned woman became his interpreter, and it was with her words that…