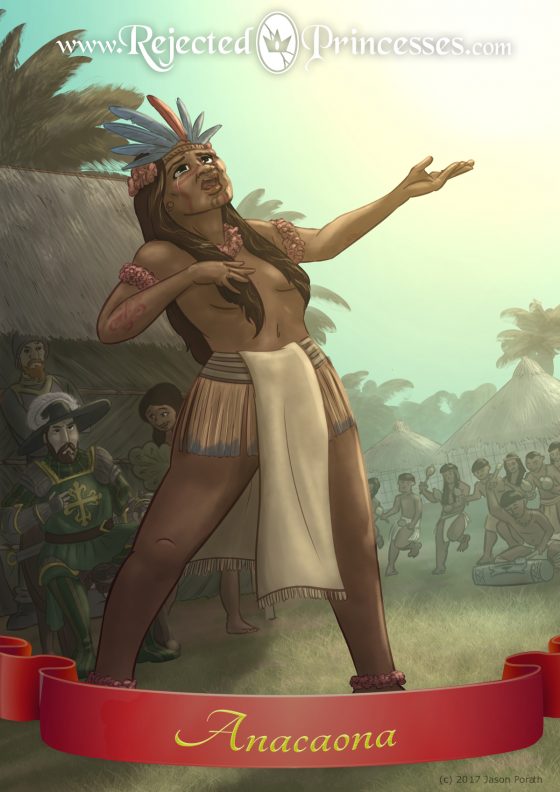 It’s (thankfully) now common knowledge that Christopher Columbus and his geographically-challenged crew were murderous slavers, raping and pillaging their way across the Caribbean. But while learning about their horrific “achievements”may be standard curriculum nowadays, it’s far rarer to learn anything about the people they massacred. Their stories are so little taught that it may surprise you to learn that, when Columbus visited the Taino people in what is today Haiti, he was greeted by a woman. She’d come alongside others to negotiate. Her name was Anacaona1 Which means “golden flower” in the Taino language –“caona”meaning gold. She’d been a negotiator alongside her brother at the 1496 meeting with Columbus’s crew, and was present at the initial meeting in 1492, although it’s uncertain how much negotiation she did then..

Anacaona was about as upper-class as it got for the Taino. Married to one of the five top caciques (Taino chiefs) and sister to another, she was one of the most respected people in the culture. Famous for her poetry, songs, and areitos (traditional dances)2 None of these survive well to current day – about the only one firmly credited to her goes like this:

Its translation is, sadly, unknown., she was not only an artist, but also an oral historian, shaping the narrative passed down to future generations. And as anyone who’s read this blog for any period of time knows: history is power.

When Anacaona’s husband Caonabo was imprisoned for leading armed attacks against the colonialists (something for which he might have been framed3 The offense in question was an attack on a fort at La Navidad. When a Taino man named Guacanagari pointed the finger at Caonabo — whose name’s “caona” is the same as the one in Anacaona‘s name — the colonialists began hunting him down. As legend has it (and this may be apocryphal) a man named Alonso de Hojeda captured him by offering him a bracelets of much-valued bronze. Caonabo accepted the bracelets, only to find out too late that they were handcuffs. Caonabo was then sent to Spain but apparently died en route.), Anacaona took on the mantle of cacique. Although the Europeans had been killing Taino for years, Anacaona realized her people could not compete on a military footing, and established a different policy to that of her husband: one of outward appeasement and integration.

Anacaona’s approach would be familiar to royalty around the world: flattery and intermarriage. Each time a European dignitary (usually Columbus’s brother) came to visit, she adjusted the schedule to stop by her store houses, that she could  shower the Europeans with gifts, and have legions of women dance for them. She insisted on checking out their ships, and gushed over their big, strong cannons. In one pretty suspect telling, Fernandez de Oviedo, a spectacularly repressed European visitor, described her and her women as willing to sleep with any and all Europeans. He compared her unfavorably to Semiramis4 A pseudohistorical Assyrian queen who, in the Greek tellings, conquered much of Asia and invented the chastity belt. In the Armenian tradition, she was a harlot who castrated boys left and right. There’s not much in between. The Madonna/whore complex: going strong for 3000 years..

Her plan to tighten bonds through marriage took root with the approach of young Spaniard Fernand de Guevara. Smitten by Anacaona’s daughter Higuemota, Guevara wanted to marry her. However, his plans were stymied by his superior officer, who was against the marriage for… seemingly no reason at all (one source supposed that he’d been interested in Higuemota first). This, along with other grievances, led many of the men to mutiny. Mutinies and other colonialist in-fighting — some spurred by the Taino, some not — served to divide up the European forces for several years5 This is actually a fair bit more complicated than there’s really time for. The superior officer in question was a jerkass by the name of Francisco Roldan, a local governor left in charge when Columbus made one of his return trips back to Spain. In that time, he rebelled against Columbus’s brother over not being able to use slave labor whenever he wanted, and started a rival colony on western Hispaniola (present-day Haiti). This sort of in-fighting was hardly uncommon: Columbus himself was sent to Spain in chains for gross mismanagement by Roldan’s successor, Francisco de Bobadilla.  Unfortunately, the two lovers never married: Guevara’s superior was ultimately the victor in their struggles, and Guevara was imprisoned and possibly killed.

The situation worsened in 1502, when the Spanish crown appointed a real bag of dicks as governor. His name was Nicolas de Ovando, and he represents one of the lowest points of the deep chasm of colonial amorality. He grew suspicious that Anacaona — who had done nothing but give money, food, and friendship to all Europeans, even after ten years of them consistently murdering her people — was plotting to overthrow him. So in a feat of counter-plotting, he lulled her into a false sense of security by announcing he was going to visit her to sign a peace treaty. He requested she bring together all the other Taino caciques for the event.

Although Anacaona had no reason to trust him, her desire for peace after a decade of slaughter outweighed her suspicions – so she did as requested. Once again, she went to the trouble of arranging a massive welcome, putting together music and dances and gifts. After the Taino displays of festivity, she and the other caciques, all unarmed and largely unclothed, sat back and watched the armored colonialists engage in some friendly jousting.

As you might have surmised, it did not stay friendly for long.

Once Ovando gave the signal6 Either touching the symbol of a cross on his chest, or touching his necklace – depending on which source you trust., the soldiers turned on the Taino. The soldiers ushered the caciques into a nearby building and tied the native leaders’ hands to the building posts. The Europeans then set the building on fire, killing everyone inside. The colonialists proceeded to thunder about the village on horseback, stabbing fleeing villagers in the back. Some of the soldiers, aghast at the massacre, attempted to help the Taino escape on horseback, but the escapees were caught and had their legs cut off. The Taino who did manage to escape to the nearby island of Guanabo were later enslaved.

But Anacaona herself had a different fate. Desiring to make an example of her, Ovando brought her to Santo Domingo and put her on public trial. Having tortured the other caciques into turning on her before killing them, Ovando had all the “evidence” he needed to execute her. Anacaona was hanged in a public square in 1503.

(It’s worth noting here that some versions mention that the colonialists offered her clemency if she became a concubine, an offer which she refused. While that wouldn’t be at all unlikely — there’s no shortage of evidence of colonialists committing similar atrocities — I have been utterly unable to find an originating source for the claim. The earliest I could find was an unsourced Wikipedia edit on March 28, 2013, and a Haitian-American novelist’s brief remark in a magazine article from 1994. More detail in my footnotes7 With one exception, every single source I could find written prior to 2013 makes no mention of this. At the most, some say that hanging was a more honorable death than an unspecified alternative, which could be a euphemism regarding the offer of sexual slavery — but it’s a bit of a stretch. I had thought perhaps Taino oral traditions preserved a different take on matters, but an 1880 Taino poem about her makes no mention of it, and neither does the Taino-run website anacaona.net, which told her story in the early days of the Internet (it went offline sometime in 2004). Notably, the claim is not repeated on Spanish Wikipedia. The closest I found to corroboration was a 1994 history related by Haitian-American novelist Edwidge Danticat, in which Anacaona was raped and killed, with no mention of offers of amnesty or sexual slavery. Danticat’s mention of Anacaona is brief, and comes with no bibliography or additional detail. My impression from the rest of the article was that it was an oral history passed through her family, but I legitimately have no idea..)

Ovando’s betrayal of the Taino led to his downfall. Disgusted by reports of his behavior8 Likely coming from Bartolome de las Casas, one of the most outspoken European defenders of native people in that era. , Queen Isabella demanded Ovando be dismissed from her death bed – which King Ferdinand eventually did, but  it was, ultimately, too late. By 1507, there were only 60,000 Taino alive. At first contact in 1492, their population had been estimated as high as half a million.

In the centuries since, Anacaona has been heralded as one of the Caribbean’s most enduring heroines. Her name graces innumerable poems, songs, roads, schools, and statues — even as holidays and statues commemorating colonialists such as Christopher Columbus are coming down all around the world.

Anacaona is here standing in the light, trying to keep the darkness (in which the colonialists sit) at bay. She is singing a poem, aware her end is at hand, a tear beginning to roll down her cheek. Most sources described the women as wearing very little clothing, and one specifically mentioned that Anacaona wore garlands of pink flowers.

In the background, Ovando sits, about to touch the cross of Alcantara on his chest as a signal. Behind him is a soldier modeled after Bartolome Columbus. To his left, a Taino woman waits on him, as a nod to Anacaona’s outreach efforts. Ovando sits in a duho, one of the ceremonial carved seats that Anacaona is said to have gifted the Europeans.

As this was the first one in a long while (after finishing up the second book), I didn’t do the guessing game. Next time!

I’m scrambling to get an online store up so I can get personalized RP books (and pins, and stickers) to you all for the holidays! Hope to have it in the next couple days. I know, it’s been a long time in coming. After that, I’ll look at the next entry.

Child, Lydia Maria (Francis). The First Settlers of New-England, Or, Conquest of the Pequods, Narragansets and Pokanokets: As Related by a Mother to Her Children

de las Casas, Bartholome. A Brief Account of the Destruction of the Indies.

Irving, Washington. A history of the life and voyages of Christopher Columbus.

Langville, James Hibbert. Popular history of the life of Columbus; a complete, compendious narrative of his voyages, discoveries, and general career.

Saunders, Nicholas J. The Peoples of the Caribbean: AN Encyclopedia of Archaeology and Traditional Culture. ABC-CLIO, 2005.

One of the first women to command a ship in the modern age, she faced down mutineers, took care of a sick husband, and sailed to safety — all while pregnant, before her 20th birthday.