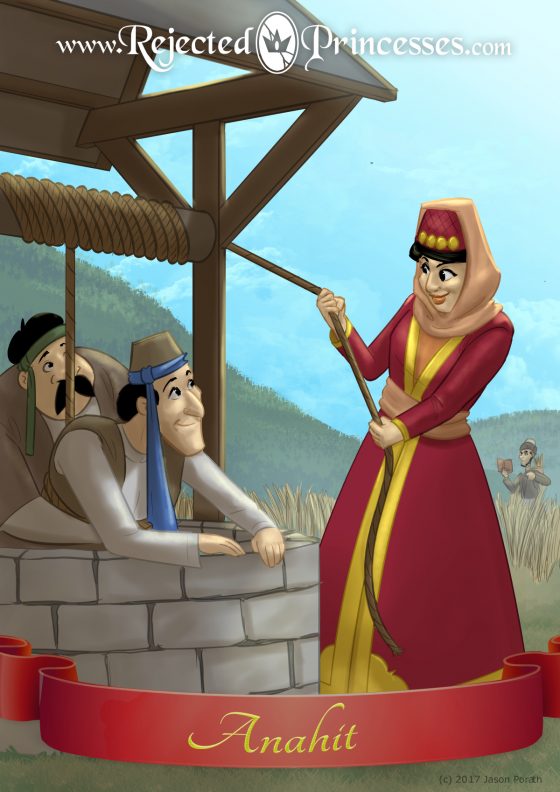 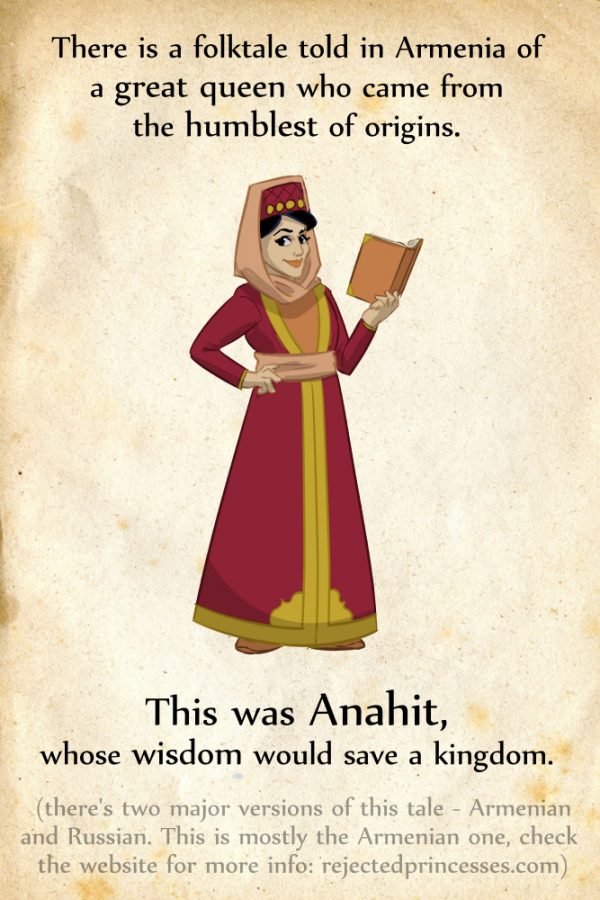 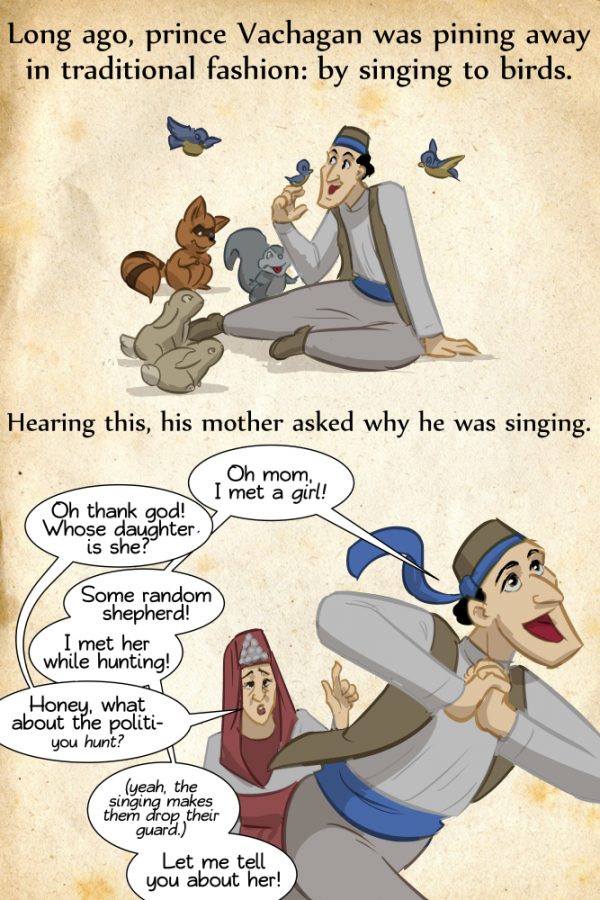 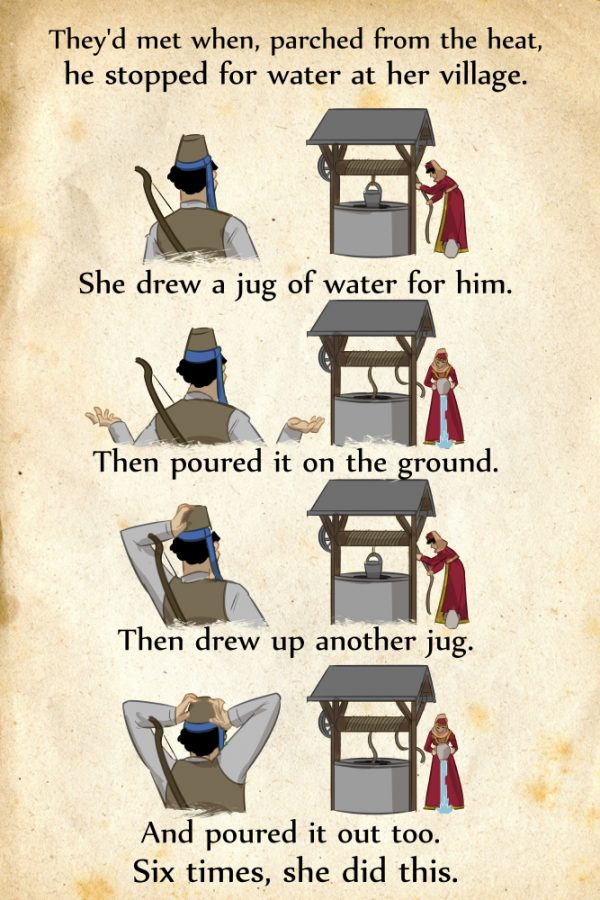 1 Yes, she should be using the crank on the other side of the well to draw up water, but I liked the visual of her letting the rope go. 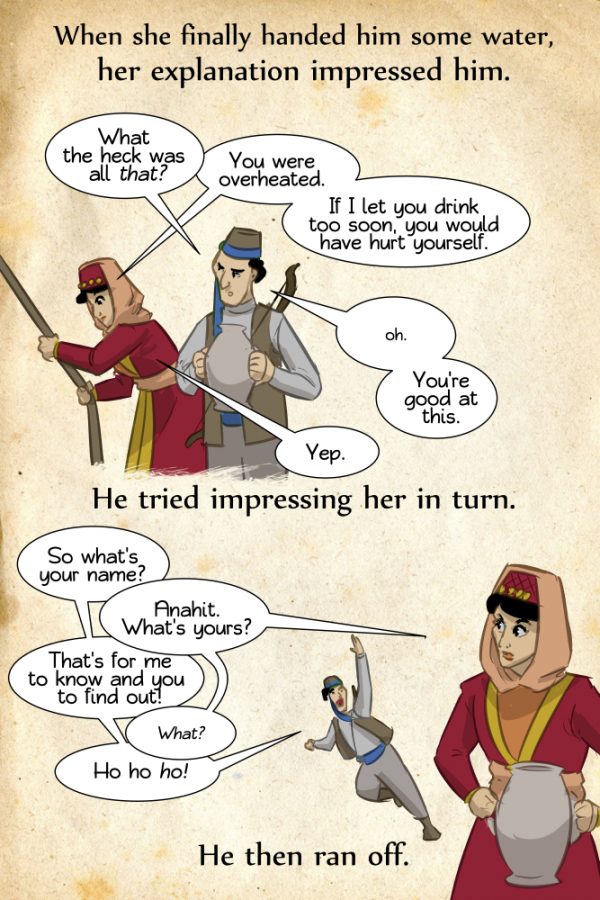 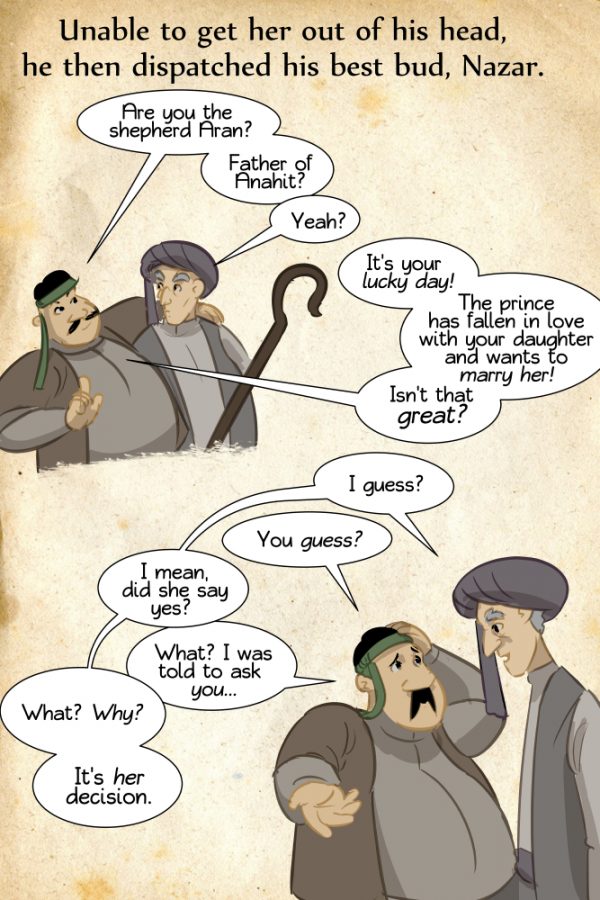 2 This point was part of the Communist Russia version – choosing the suitor is an important part of traditional Armenian culture. Communist Russia was more egalitarian in its attitude towards women, it would seem.3 Nazar is the name given to him in one version  – in the other, it’s Vaginak. That name caused giggling in too many of my friends, so I stuck with Nazar. 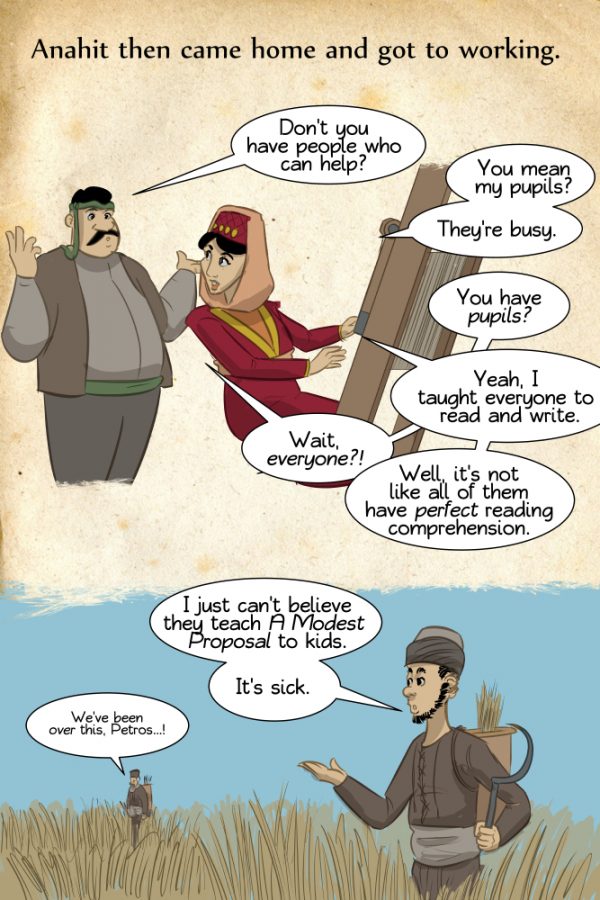 4 This “yay proletariat”-ism also comes from the Russia version.5 The original gag for Petros was him saying, “I don’t get it, why is Tyler Durden the bad guy?” but it seemed too dated a reference (and too many people saw the movie instead of read the book). 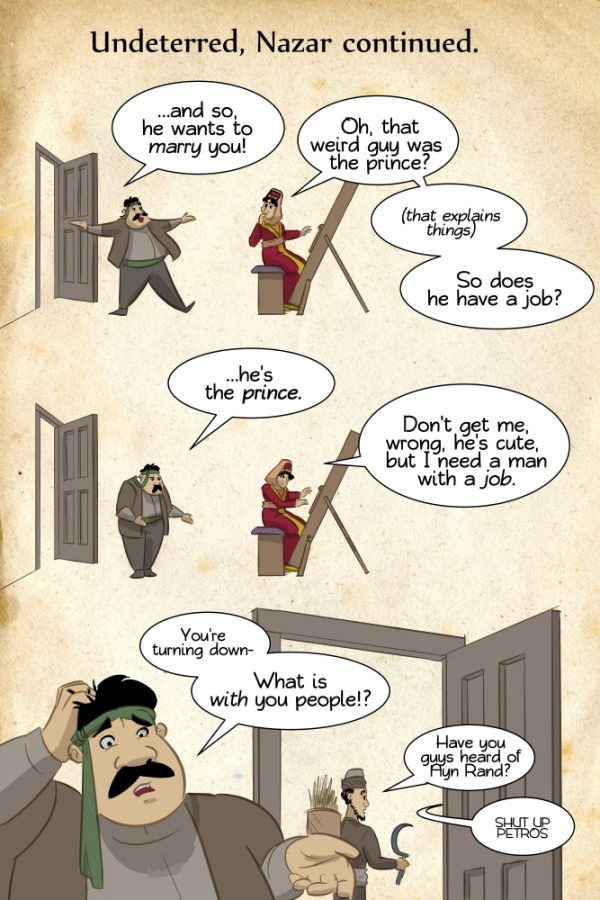 6 Petros is my favorite character in this. 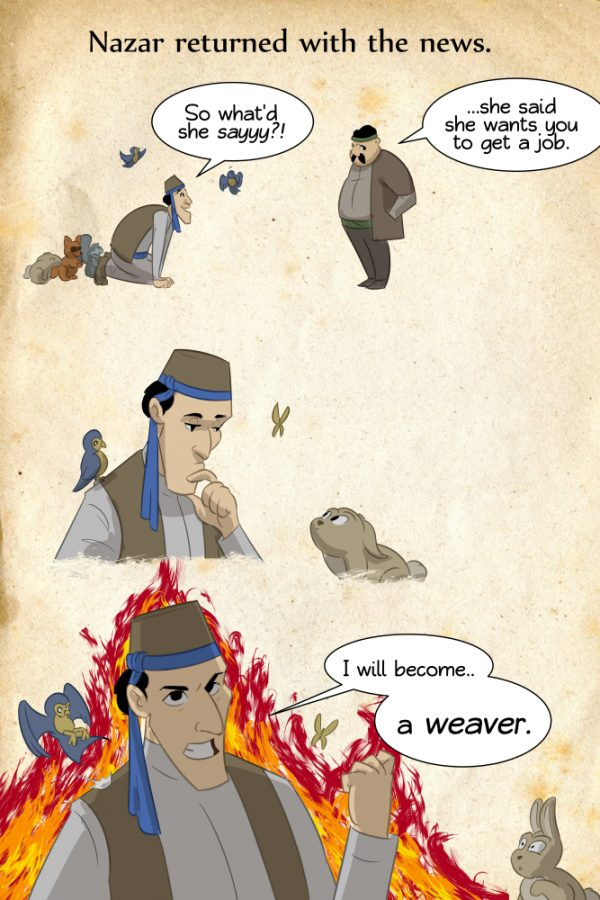 7 Armenians are quite serious about their clothing, and weaving is a big part of that. 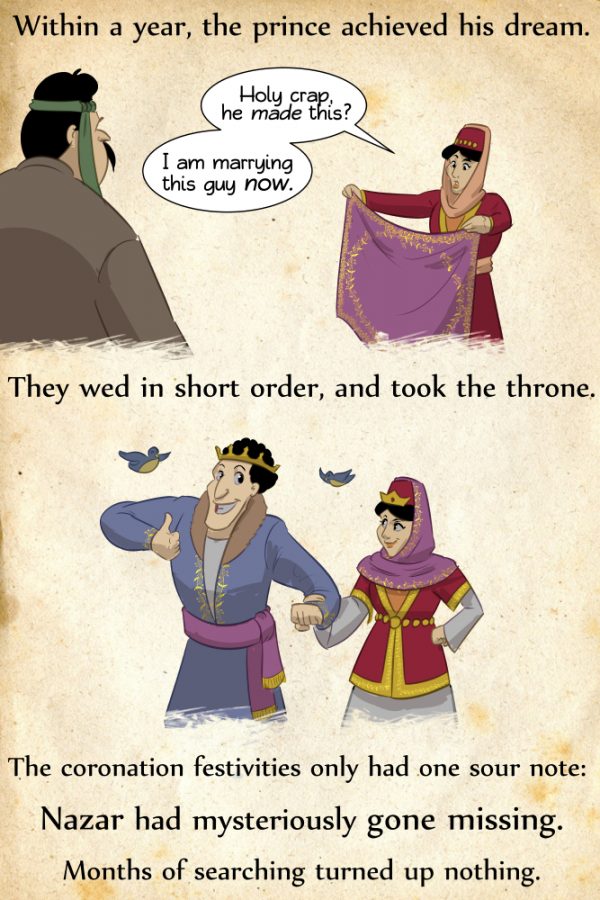 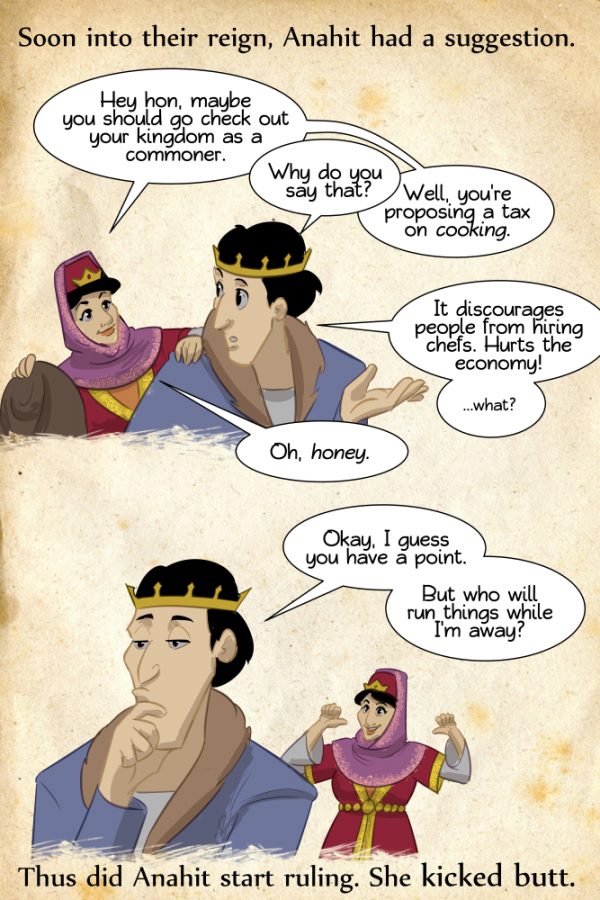 8 No version explained why she encouraged him to go check out the kingdom, apart from him generally seeming disconnected from the common man. 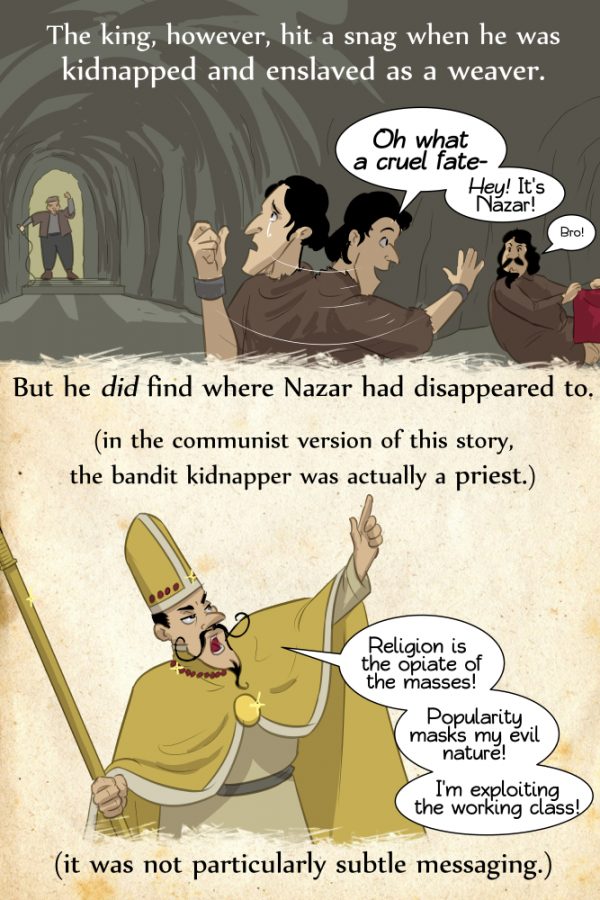 9 The Russian version has a very long scene where he comes to a temple, and the priest is built up as this super cool guy who wouldn’t hurt a flea – people lay out bricks for him to step on so he wouldn’t touch the ground, that sort of thing. He then promises the incognito king a job, and traps him in a dungeon. 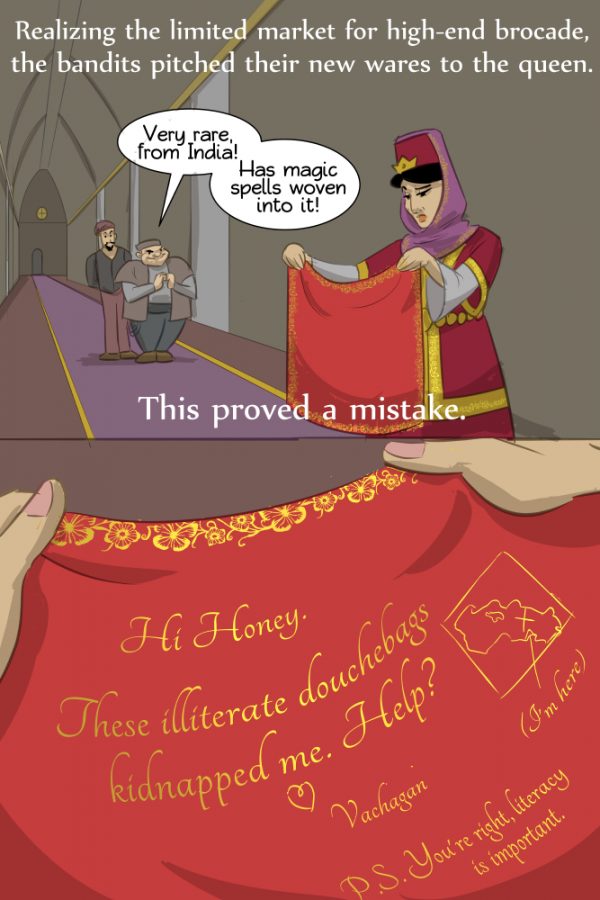 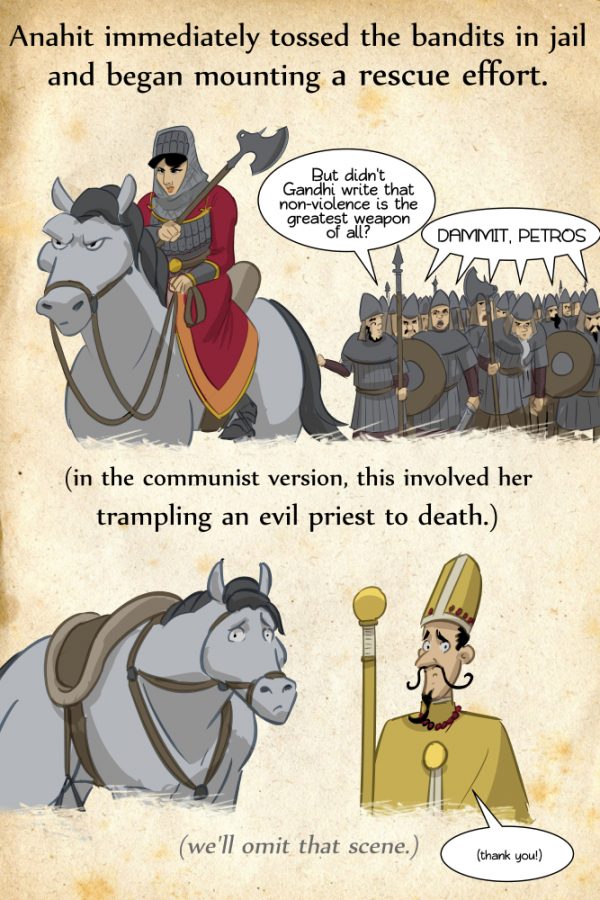 10 In the other version, she and the horse break down a wall hiding the cave dungeon, but I liked the visual of her busting down the door much better. 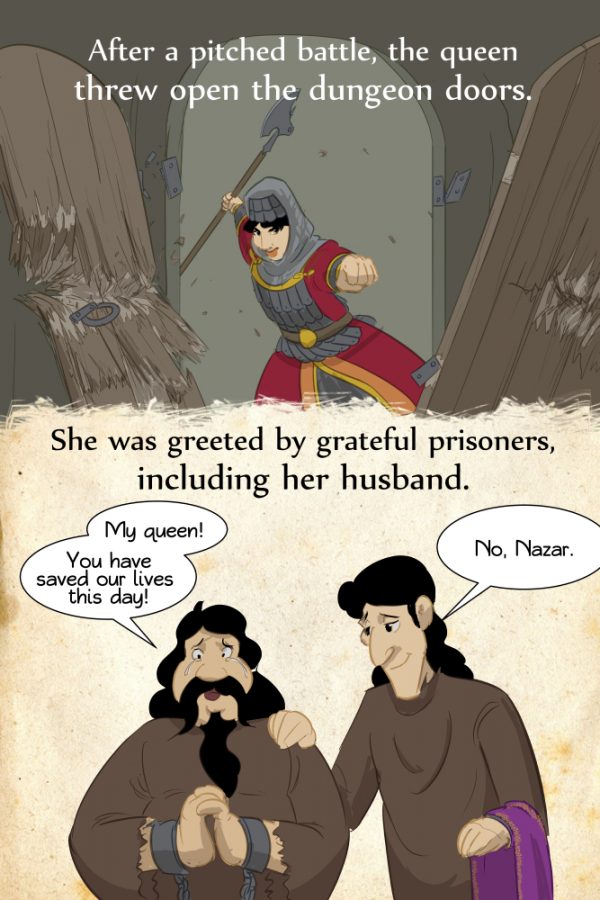 11 That’s legit how the story ends. I think it’s sweet.

I can’t understand it, but seems to take some liberties: Anahit’s uncle is a schemer in league with a shadowy devil creature, her horse gets a flaming mane, there’s a talking dog…?

Thanks go to Morgan Kwok (for doing some visual research for this entry and surprising me with a bunch of images) and Karen Hamilton (for looking over the entry and catching awkward phrasing and suggesting improvements) – thank you!

Second off: this hint was hard on y’all!

Back to folk tales for a bit. Here’s your hint:

If you wanted to marry this Armenian princess, you’d better get a job.

This level-headed naginata expert nevertheless lost her head in what is today Fukushima.