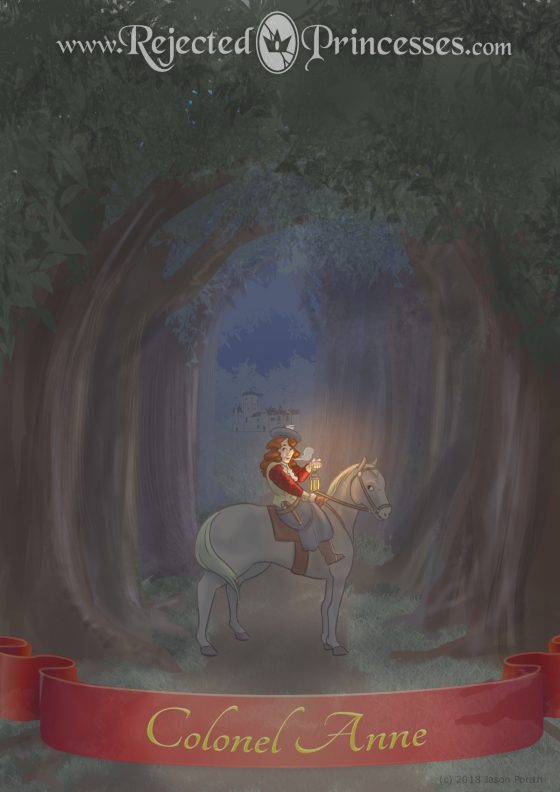 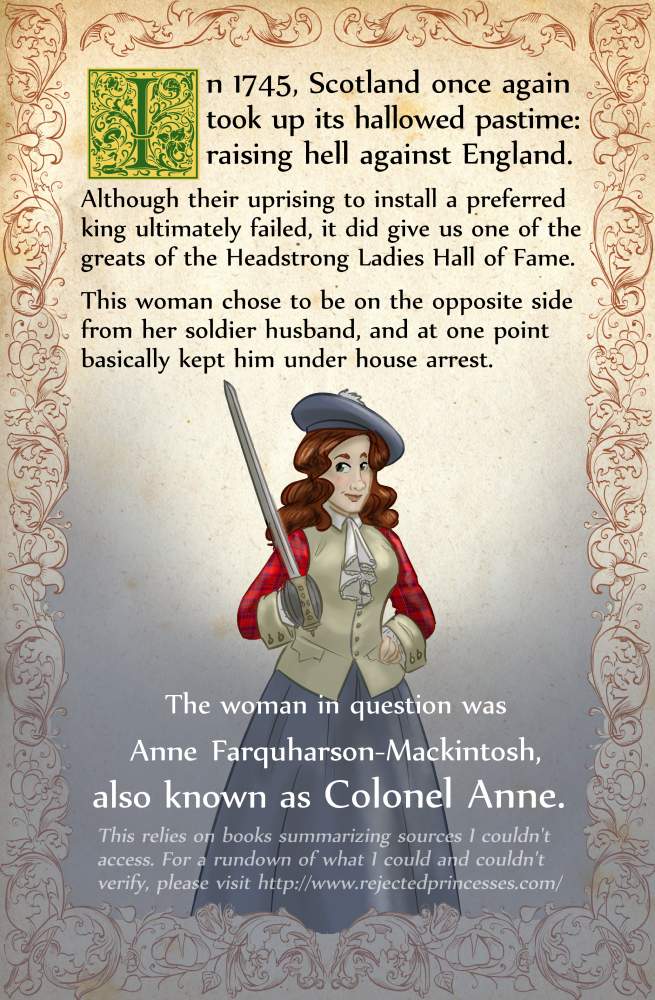 1 So the broad outlines are confirmed in a lot of places – the finer details I had to get from Jean Mackintosh Goldstrom’s Colonel Anne Mackintosh: Scotland’s Beautiful Rebel. That is a self-published book and I’m really wary of using it as a main source, but I didn’t have a lot else to go on. The author is clearly not impartial on the topic, but they cite a lot of works at the end, and various people they contacted, none of which I can personally access. I couldn’t find anything flat-out wrong in it, although there’s some stuff omitted. 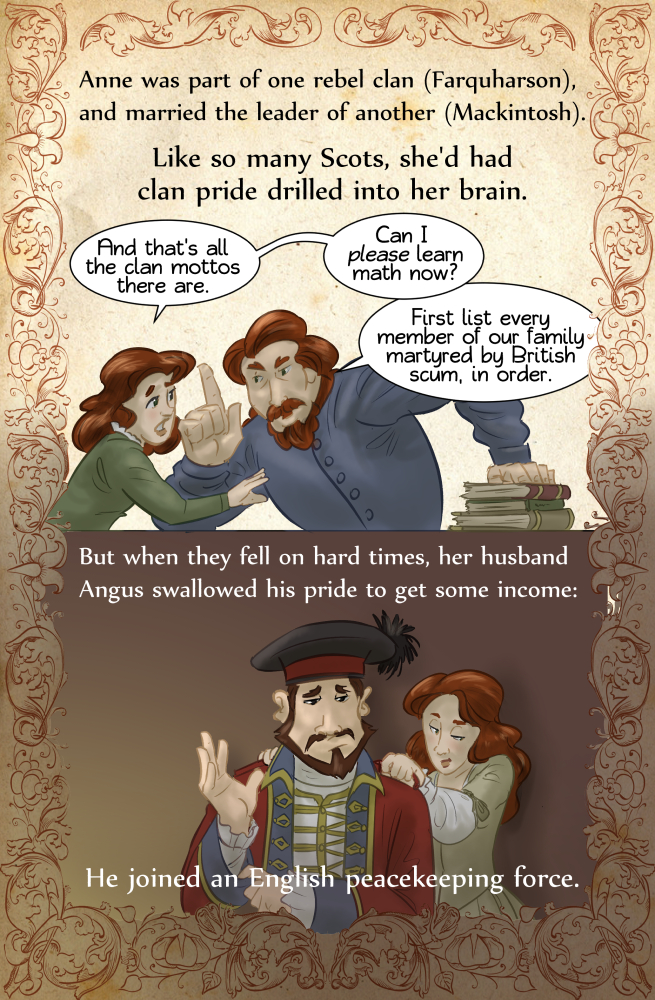 2 Regarding the first panel: I’m kidding, Scottish people (well, mostly). Anne did have an education growing up, which was unusual for European women in general, but not that uncommon for Scottish women.3 Angus joined the Black Watch, an English-run militia of Highlanders, which they employed against the Jacobites (the people who were for Stuart rule).4 The Farquharsons and Mackintoshes were both part of a larger umbrella clan, Clan Chattan (whose symbol is a cat). The Mackintoshes were the main house of Chattan, and Angus was thus head honcho for a lot of stuff. All the Chattan folk had fought in previous Jacobite uprisings, particularly in 1715 (30 years earlier). 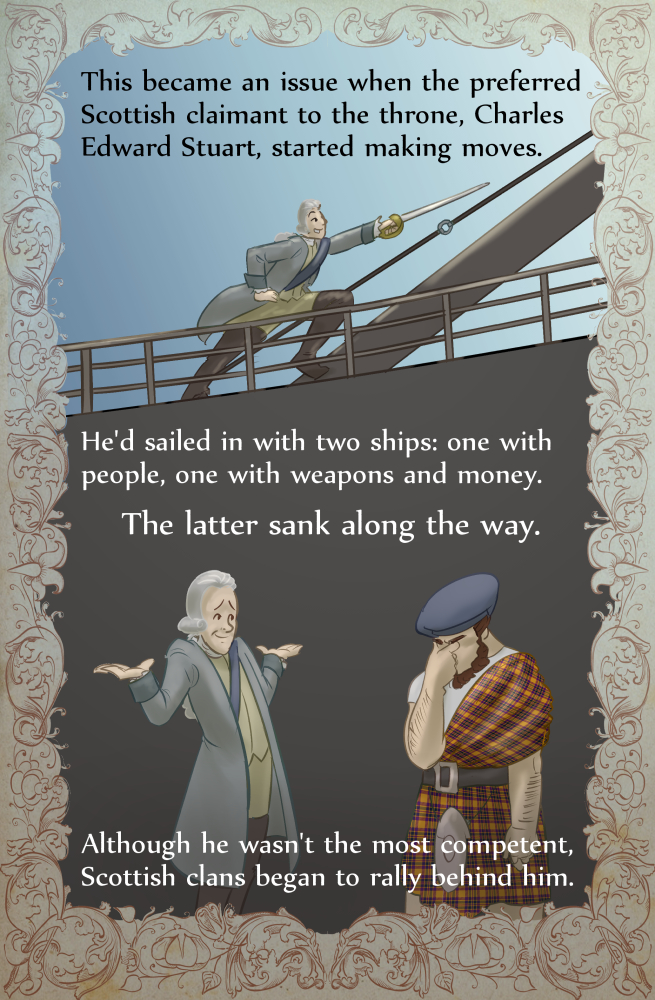 5 Charles was also known as “Bonnie Prince Charlie” or “The Young Pretender.” This was the last of a series of attempts to place the Stuarts on the throne, starting in the late 1600s. I believe there were 5 or 6 armed attempts, and a couple more planned out but never implemented. For more on this fight over succession, look up James II of England (VII of Scotland).6 Charles was a bit of a prat when he first landed – and really, kind of throughout. A couple different clan chiefs came out to meet him but were a little reticent to support him. He told Lochiel of the Cameron Clan that if he didn’t join his forces, “You can stay home and read about it in the newspapers.” It took a month or two for them to decide on it, but a lot of the clans did throw in behind him anyway – despite him being an unproven 23-year-old who’d lived much of his life in Italy.7 I was unable to verify the bits about his boat sinking or his initial meeting with Lochiel and the lot in anything aside from the aforementioned book. 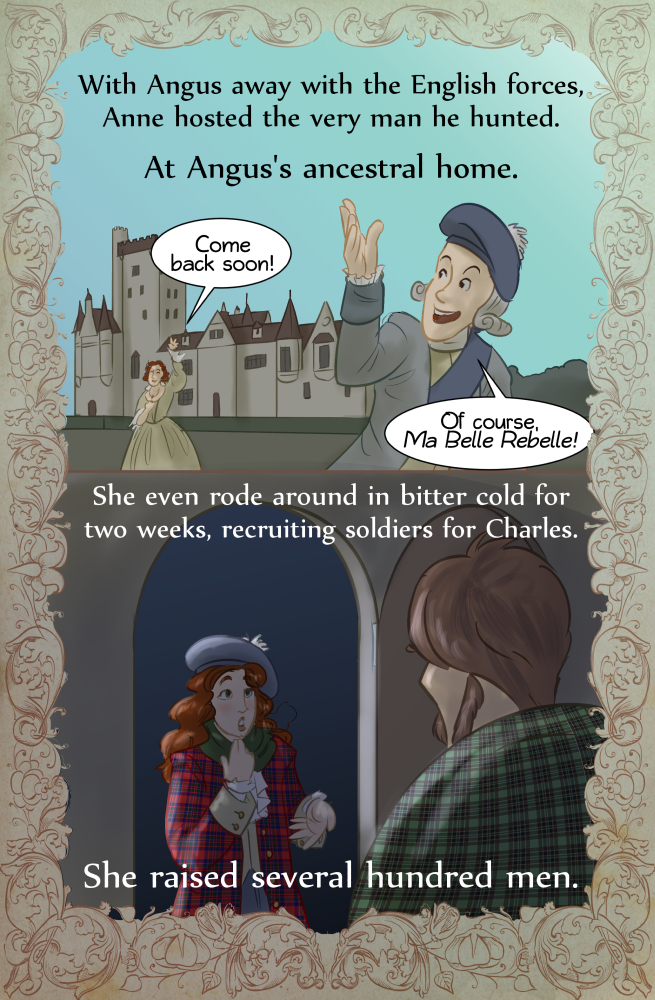 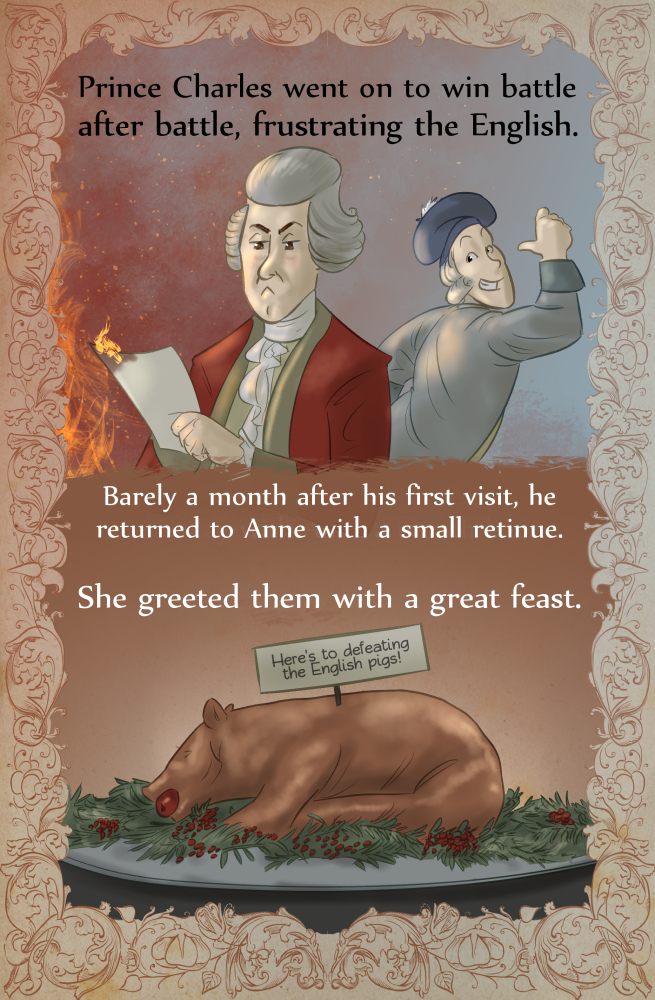 9 Charles won in the Battle of Prestonpans and the Battle of Falkirk, and his army had swollen to upwards of 9000 men at this point. When he came back to Moy Hall, he did so with only about 50 men, though.10 That man depicted up top is the Earl of Loudon, who was overseeing much of the English effort at Inverness. Angus and the Black Watch worked under him.11 I have no idea if she served them pig. I just thought it was a funny visual. 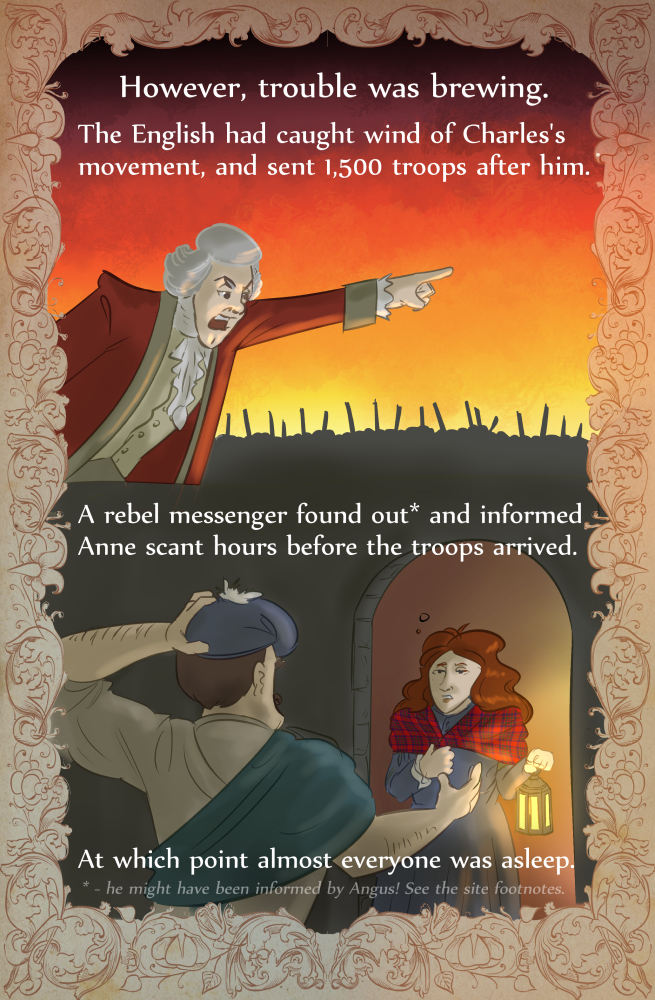 12 So I’m leaving out some details here. Multiple sources relayed that the info came from Angus’s mother, the Dowager Lady Mackintosh, who lived in Inverness. She relayed it to a guy named Lachlan Mackintosh, who snuck past the guards and hightailed it to Anne. How the Dowager came to know about Loudon’s plans is unknown, but Jean Mackintosh Goldstrom theorizes it was from Angus, who would have likely known. It seems like a pretty reasonable conclusion, honestly.13 Sources differ as to whether Anne roused the visiting king and crew, or whether they slept through all this. 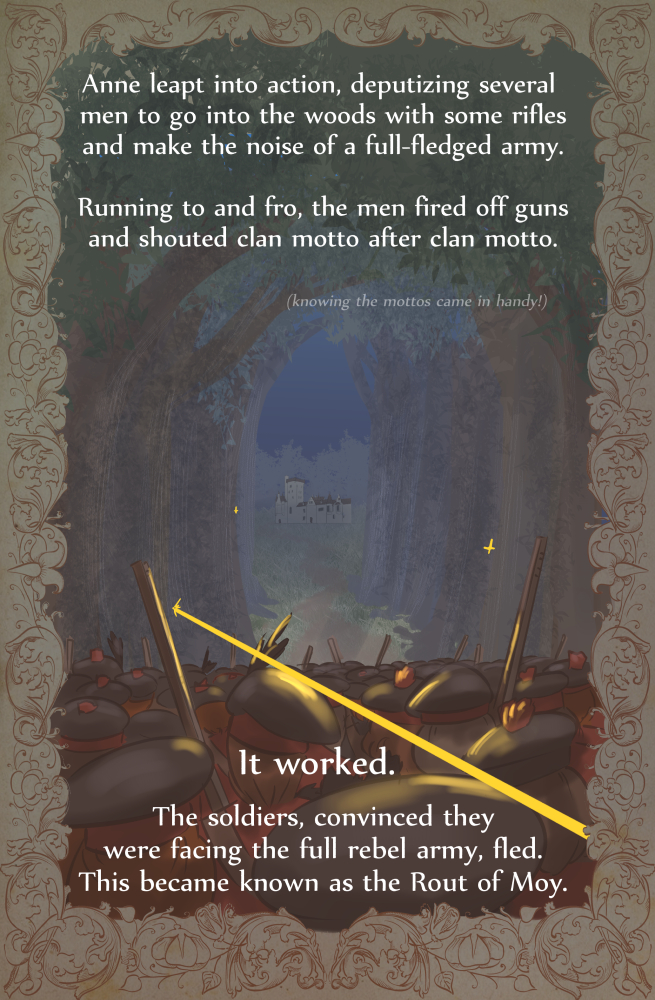 14 Estimates of how many men went range from 5-7. The one who is mentioned in every telling as being there was the blacksmith, Donald Fraser.15 Several sources indicated that the 1500 were mostly from the MacLeod clan, and they lost heart after their bagpiper was shot (the only fatality from this incident, I believe). 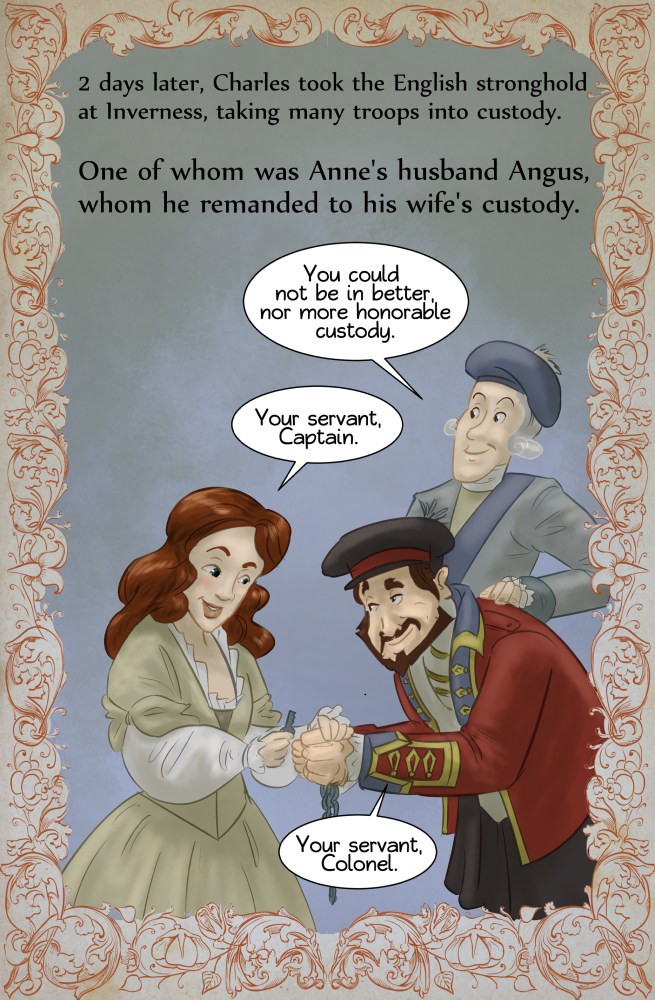 16 When Charles went to Inverness, he stayed with the Dowager Lady Mackintosh, who had a swanky pad.17 The dialogue here is repeated verbatim in multiple tellings. 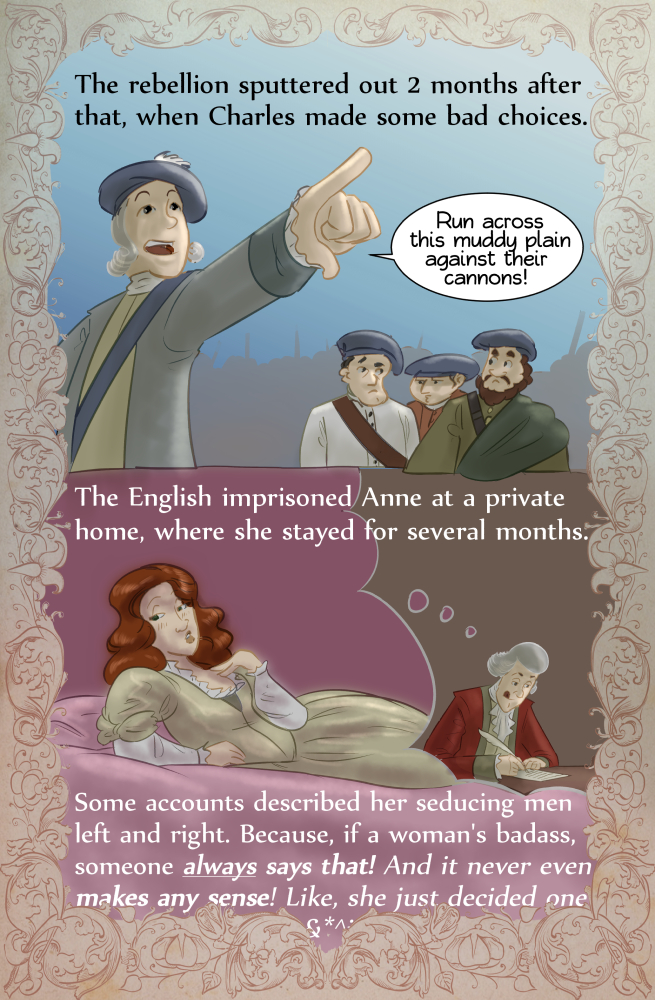 18 The top panel references the Battle of Culloden, where Prince Charles displayed some truly awful tactics that got a huge chunk of his forces killed. He fled to Europe 5 months later.19 The Mackintosh Goldstrom book relays some stories about Anne being hyperbolically poorly treated by the English, which sounded to me like passed-down propaganda, so I’m omitting them. There’s also some stories about her attempting to help some soldiers in hiding – read the Goldstrom book if you’re curious, it’s like a buck on Amazon.20 The “Anne slept with everyone” bit comes from Geoffrey Plank’s Rebellion and Savagery: The Jacobite Rising of 1745 and the British Empire. He cites sources I couldn’t access, indicating that Loudon himself had a crush on Anne and spent a ton of time around her – and that she had a reputation as a temptress. I find this all somewhat unlikely, but if you’ve been reading this site for any period of time at all, you know how my Occam’s Razor is situated. 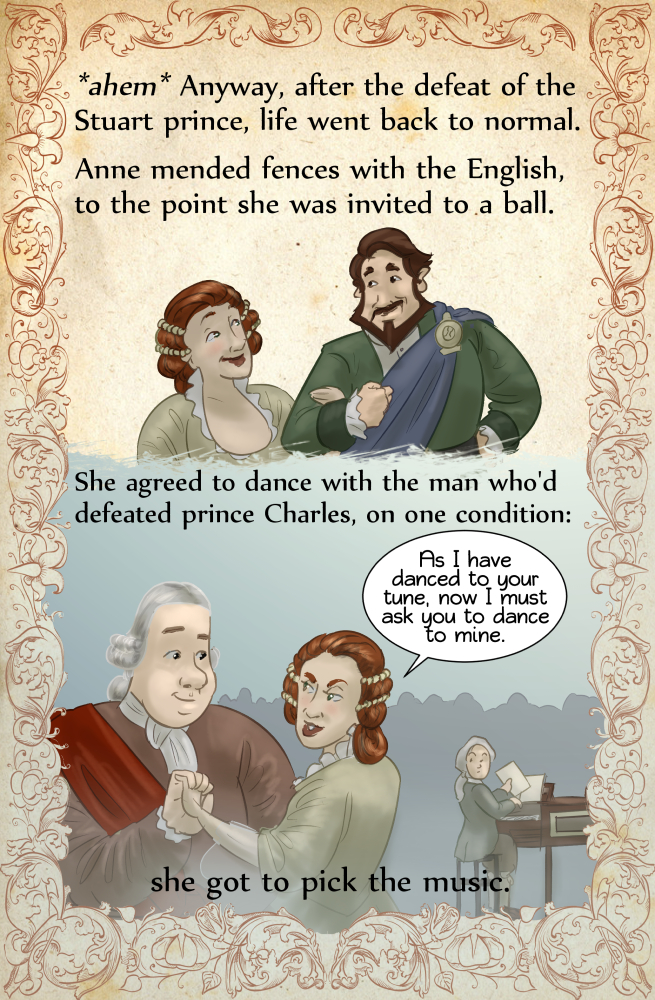 21 This was a ball held in London in 1747 by the Earl of Cumberland — the English king’s second son, who’d defeated Charles at the Battle of Culloden, and reportedly employed some pretty cruel tactics (and people). Anne had been working hard in the meantime to bridge gaps and generally reintegrate the Jacobites into British society. 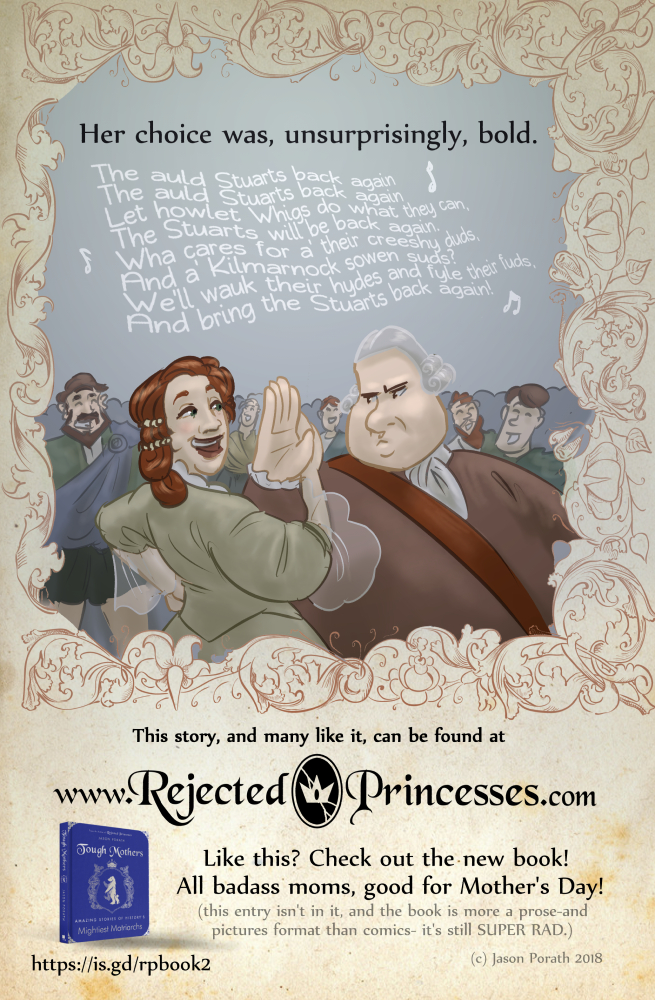 22 This song is “The Auld Stuarts are Back Again,” a song they sang on the front lines fairly regularly.23 Angus died in 1770, and Anne died 17 years after that, in Leith. They only had one child, a daughter, who died in infancy. Wikipedia currently lists her death year as 1784 but I believe that is incorrect.

I don’t understand the song lyrics much more than you do.

I really hate this entry’s poster image. Inspiration didn’t strike, and I ran out of time. If it makes it into a book,  I will absolutely redo it.

I am sure that I got some of the finer points of Scottish dress incorrect. I did try looking this stuff up, but it’s an endless morass of who wore what when and I likely goofed on something or another. I apologize in advance, Scottish people. I have tried to do well by your culture. It is a daunting task to do on a deadline. 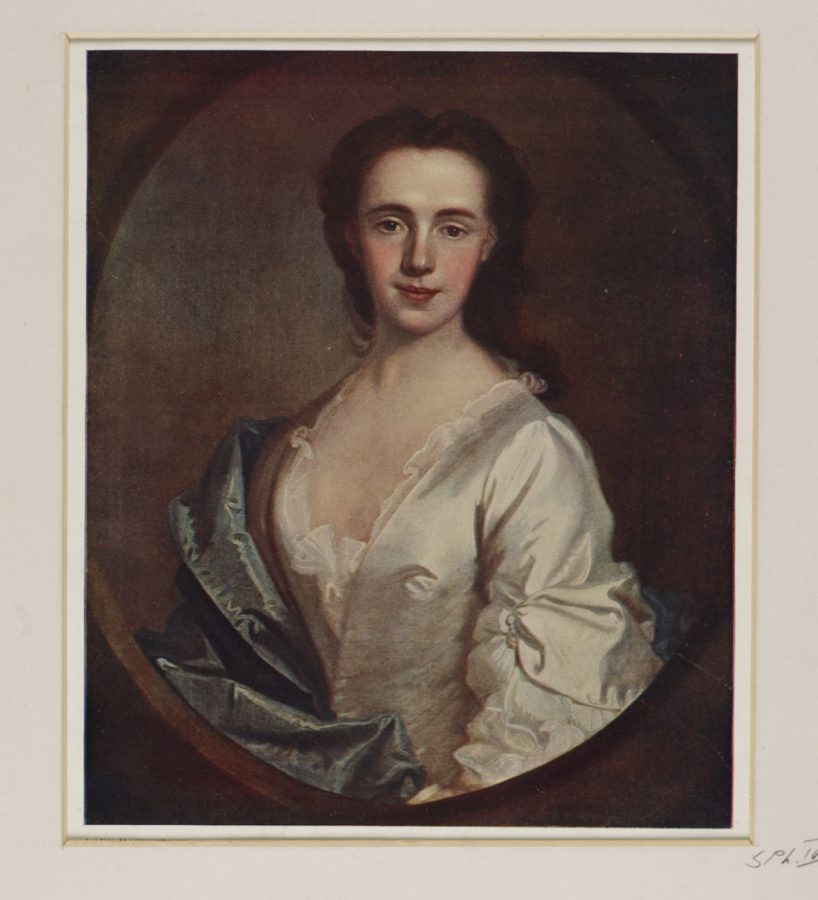 Y’all – I’ve already done entries on Black Agnes and Boudica. Why did so many of you guess them?

When this Scottish woman, against all odds, held off troops with a bit of trickery, they could have called it the Rout of Joy instead.

When this Mongolian woman stood up to her terrifying father, she saved her in-laws’ entire country.