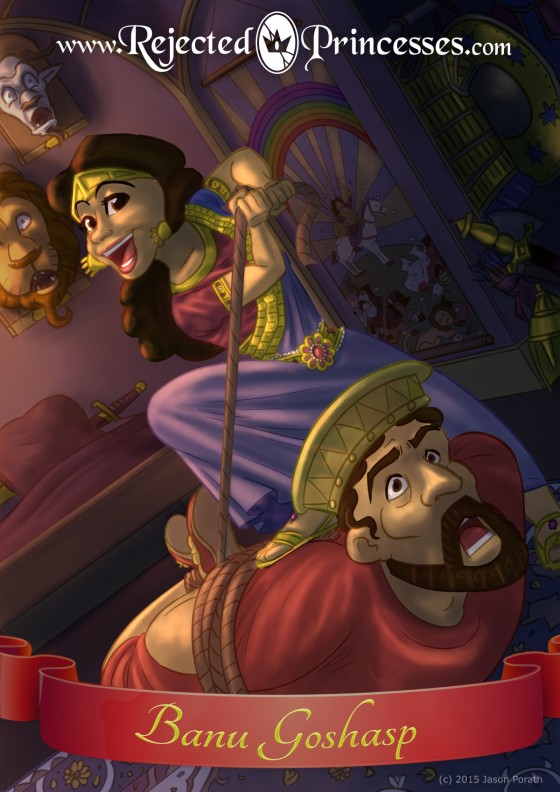 The mythology of ancient Iran comes across, to some extent, like (really) old-school superhero movies. Each of the characters has solo adventures, but when the country is endangered, they all band together to break out the industrial-size cans of whoop ass. A mainstay of these o.g. Iranian Avengers was Banu Goshasp: accomplished butt-kicker and daughter of team leader Rostam.

But unlike most female superheroes, Banu Goshasp got her own movies. Plenty of them.

The cycle of stories which feature Banu Goshasp1 “Banu” is just an honorific title, like “Lady.” Not strictly necessary, but you almost never see her name written without it. are collectively known as the Sistani Cycle, and revolve around the heroes of the Sistan region. The most famous piece of literature featuring them is the Shahnameh2 “The Book of Kings,” which, at 60,000 verses, is the longest epic poem ever written by a single person. It’s the national epic of Iran, and covers far more than just the Sistani heroes. But the Sistani part, which takes up a majority of the whole, is all we’re focusing on., which, in most versions, doesn’t actually feature Banu Goshasp. She does, however, show up in a ton of other texts, primarily her own 900-verse epic poem, the Banugoshaspnameh. Which is pretty great.

Banu Goshasp’s first big adventure was one of rebellion. Although her father Rostam strictly warned her not to go into the neighboring kingdom to hunt, she and her brother Faramarz, being teenagers who knew better than everyone else, went anyway. In response, Rostam: disguised himself as an itinerant wanderer; threatened to beat them up and sell them into slavery; and started wrasslin’ with them.

Rostam had some unorthodox ideas about parenting.

After Rostam narrowly beat each of them one-on-one, Banu Goshasp said “fuck it, I ain’t gonna be a slave,” and started going at her father with a sword. After a couple rounds of stabbing, she realized she was actually cutting up her dad and stopped short of killing him. (he, being the Superman to the Sistani heroes’ Justice League, was fine)

In the second of her adventures, Banu Goshasp was adventuring about when a prince from a neighboring country fell in love with her. Soon thereafter he left, but a Turkish warrior, figuring that she’s probably pretty awesome if a prince fell for her, decided the thing to do was to abduct her.

She then cut him in half. The end.

A Turkish warrior decided to abduct her. She cut him in half. The end.

Adventure three was also one of potential suitors – this time three Indian kings, whom she challenged to a joust. The rules were simple: first one able to knock her out of the saddle, she’d marry. The end tally: 1 dead, 1 injured, 1 runaway, and 1 unmarried woman.

Her longest story revolved around the man she did finally marry. This was an arranged marriage, set up after her dad heard that there was a banquet of drunk guys nearby who all wanted to marry her. Figuring that a frat row’s worth of alcoholics was a fine place for matchmaking, unconventional father Rostam went forth to present them with a challenge. He laid out a big carpet and had all 400 of the fine upstanding young drunks sit on it. He then shook the carpet vigorously, and only one lush was able to stay on: the mighty hero Giv, who was now to be her husband.

Giv, however, was no match for Banu Goshasp – at least if she had anything to say about it. Come their wedding night, she beat him up, bound him with rope, and stuffed him in a closet. When he eventually wriggled free, Giv had to get Rostam to intervene in order to prevent her from stuffing him into the closet again. She relented and they had a pretty decent marriage afterwards, or so the story goes.

On their wedding night, she beat up her husband, bound him in rope, and stuffed him in a closet.

Although those are the biggest of her adventures, she had a number of others:

Sadly, none of her adventures have been directly translated into English, and as of this writing, only summaries exist for her various exploits.

I had a ton of fun making this one! I put a lot of callbacks to her various adventures in her room.

Here’s her embroidery in greater detail:

First off, I want to thank my flatmate Ladan for helping out with some of this. Tracking down concrete info on Banu Goshasp was a process of many months, and involved some translation from Farsi. I’m quite grateful.

Now, as for the guesses: I am pleased that I was able to throw a lot of you. Many assumed I was talking about Scheherezade, but she’s got nothing to do with the Shahnameh! *evil cackle*

Although she never really made it into the Shahnameh, this heroine’s adventures – particularly on her wedding night – are worth hearing.

Faramarz, the Sistani Hero: Texts and Traditions of the Faramarzname and the Persian Epic Cycle by Marjolijn van Zutphen
The Sistani Cycle of Epics, a dissertation by Ameneh (Saghi) Gazerani, Ohio State University

Setting fire to your Viking suitors: fun, but bound to earn you an unflattering nickname.

Next: Sigrid the Haughty
Prev: Riina