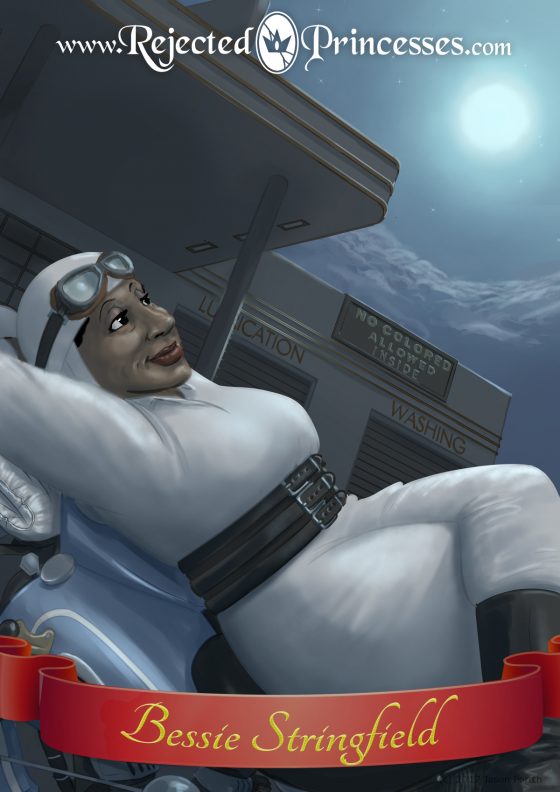 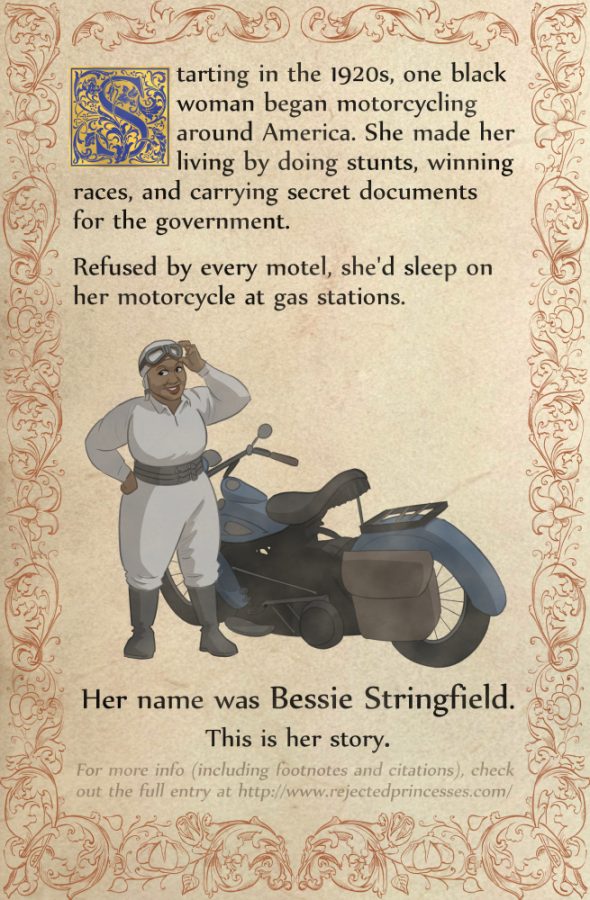 (important update: there’s been a lot more to come out about Bessie Stringfield than when I first wrote this; that’s relayed at the end of this article, but for more info on Bessie, visit biographer Ann Ferrar’s website at http://www.bessiestringfieldbiography.com) 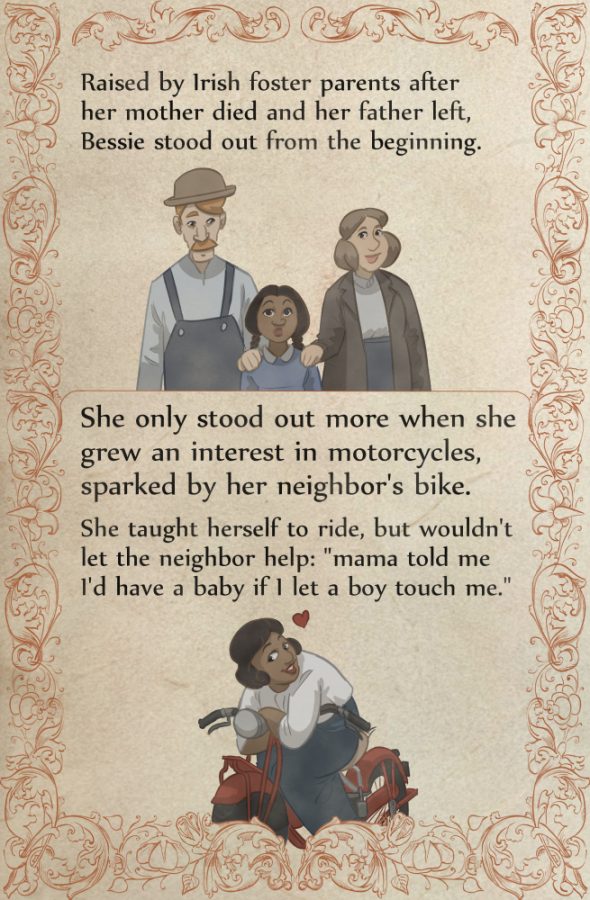 1 Her birth mother, according to most sources, was a Dutch maid who died in childbirth. Her dad was West Indian. Bessie was born as Betsy Ellis in Kingston, Jamaica. They moved to Boston when she was young, and her birth dad gave her up for adoption at age five — however, as noted in a 2018 New York Times obituary on her, this is almost certainly a latter-day invention by Bessie herself. Nobody is trustworthy!2 There are virtually no details on her foster parents, aside from them being Irish. In one interview, Bessie even said that she wasn’t allowed to use her foster mother’s name. Again, this is likely an invention on her part, and this New York Times obituary claims she did not have foster parents, and that her parents were named Maggie Cherry and James White.3 I do not want to put too fine a point on her “standing out” — that is more a convention of the story and her character than the role of her race in her childhood. According to her, she had a pretty decent childhood: “Back in those days in Boston nobody gave it a second thought that a white woman had a colored child. There wasn’t all the racial trouble there then.” And once more: she probably didn’t actually have adoptive parents, as per this New York Times obituary. 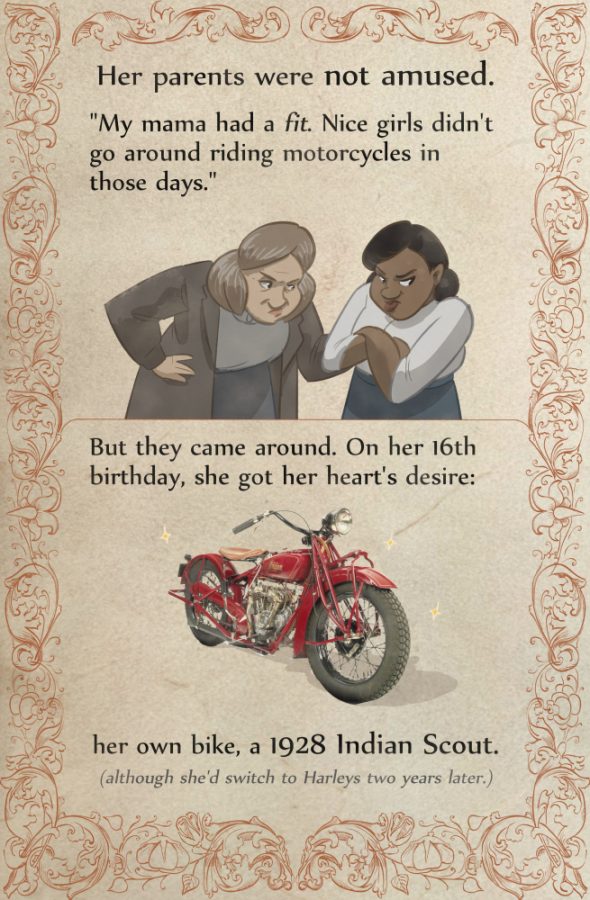 4 A devout Catholic who gave much credit for her ability to “The Man Upstairs,” Bessie claimed that Jesus had actually taught her how to drive in a dream: “One night in my sleep, I saw myself shifting gears and riding around the block. When I got out on the street, that’s just what I did!” 5 She’d replace the Indian Scout with a sixty-one Harley. 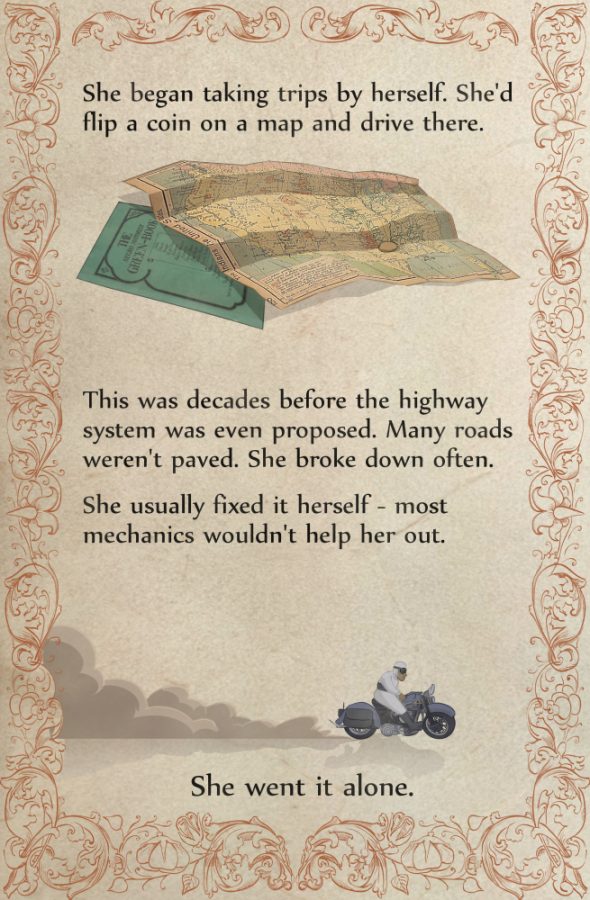 6 This was starting in 1925. The highway system wouldn’t be proposed until 1956. She only started doing longer distance rides around 1930, though. She did eight long distance solo rides between the 1930s and 1940s. In so doing, she became the first black woman to ride a motorcycle in everyone of the 48 contiguous United States, and made trips to Brazil, Haiti, and parts of Europe.7 The green book there is the Negro Motorcyclist Green Book, a guide used by people of color to navigate the treacherous waters of American travel in the era of segregation. It first came out in 1936, and while this page depicts her travels starting in 1930 or so, I assume she probably used it — would not be surprised if she helped contribute to it. 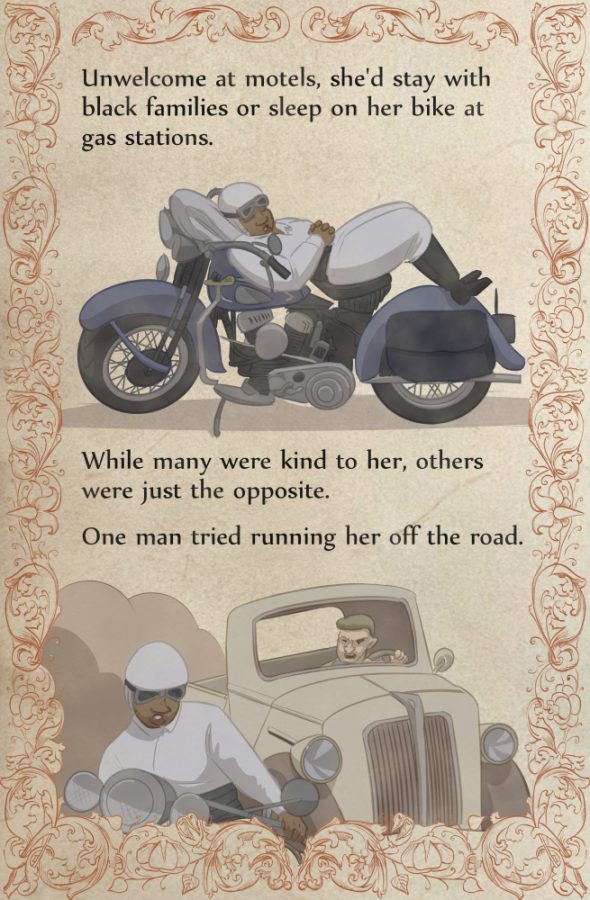 8 One guy even gave her a free tank of gas, he was so impressed by her fortitude. Of the near-death experiences she had, she merely characterized it as “ups and downs.” 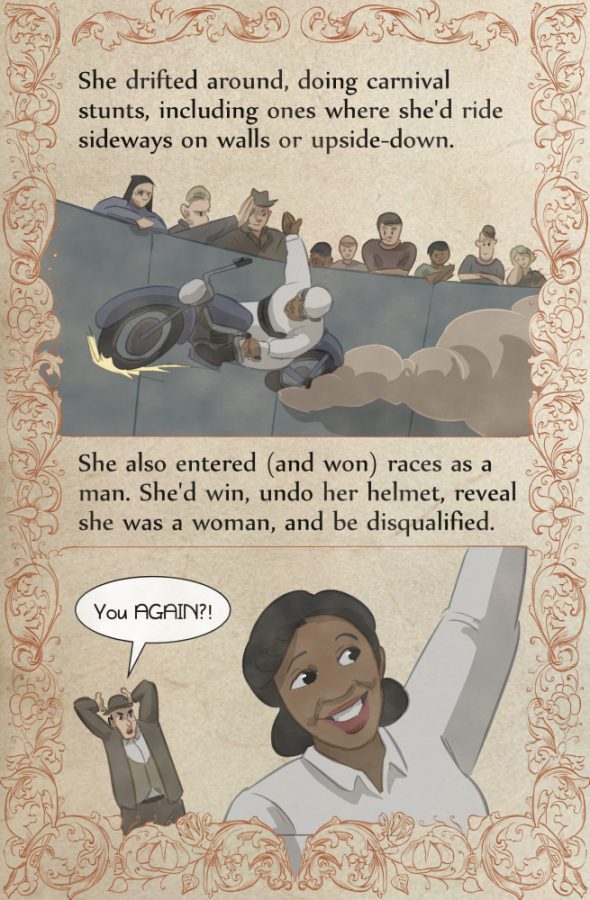 9 The trick portrayed at the top was called the Wall of Death, and was a pretty common thing to see back in those days. 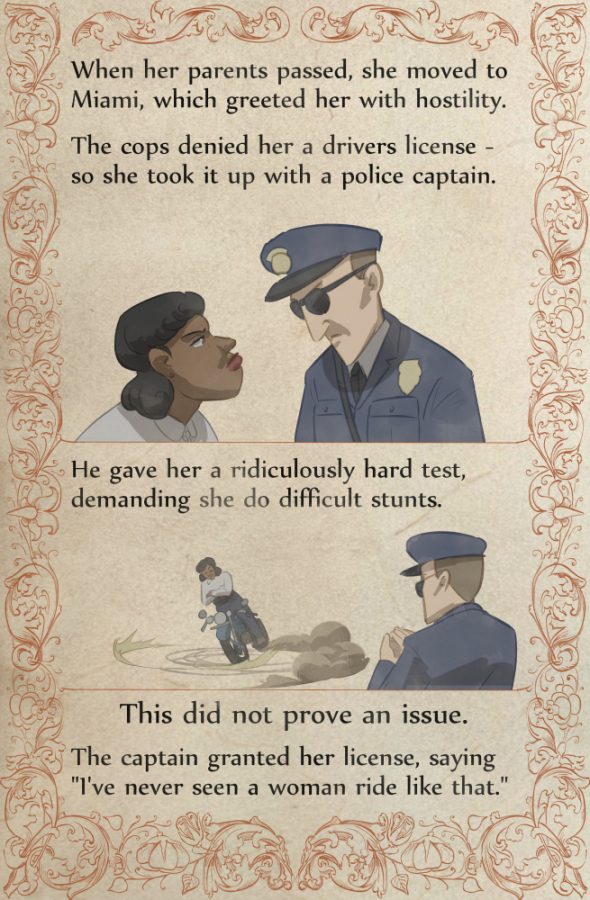 10 The exact quote given in numerous sources was “N****r women are not allowed to ride motorcycles in Miami.” This was in 1932.11 This was Captain Robert Jackson, whom Bessie would take to calling Captain Jack. She gave different accounts of the tricks he asked her to perform – everything from figure eights to hopping off her moving bike, catching it, and remounting it. 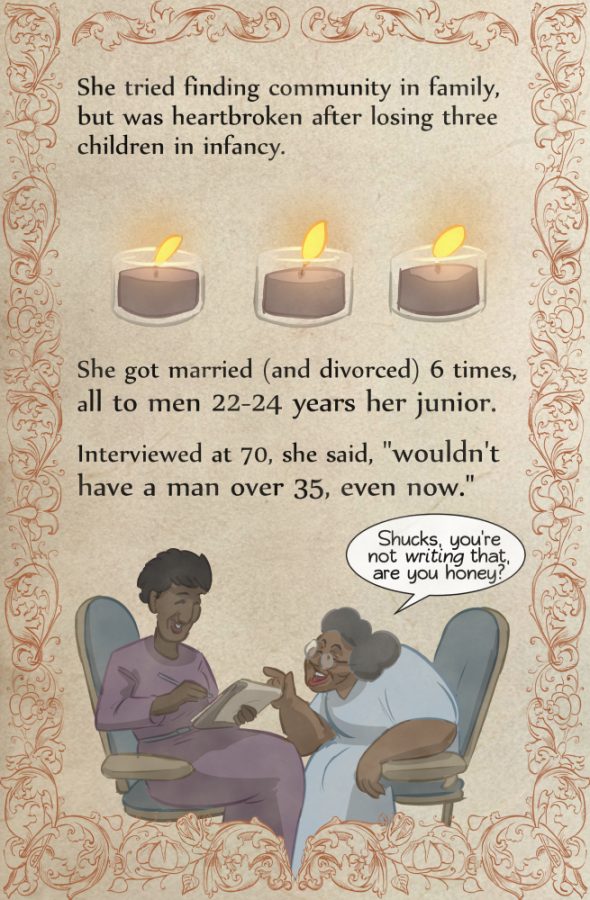 12 Two of her children died in childbirth, and the third died at four years old, causes unknown. They were all with her first husband.13 The identity of her husbands isn’t available in any sources. I know she taught two to ride, and at least one was in the military (she’d ride from base to base to visit him). Her third husband’s surname was Stringfield, and he told her to keep it, as he was sure she’d become famous.14 Some sources quote her as saying only got legitimately married five times — while others say she got married six times. My guess is that one, she counted as less than legitimate. She seemed to brush off the idea that she’d been married a ton, saying of the era, “If you kissed, you got married.”15 The interviewer in question was Miami Herald reporter Bea Hines. Yes, that art is based on her appearance in the 80s – the article ran in 1981. I do as much research as I can. 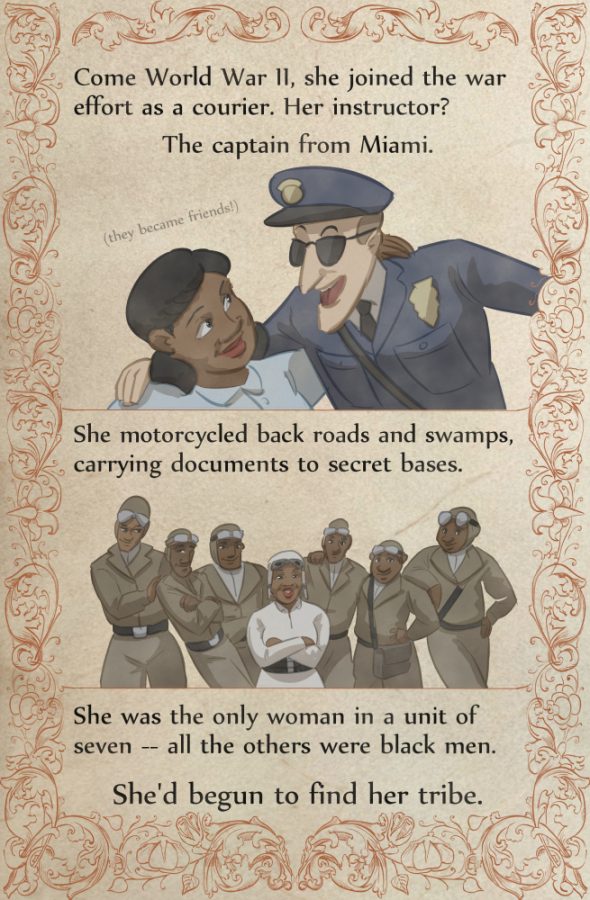 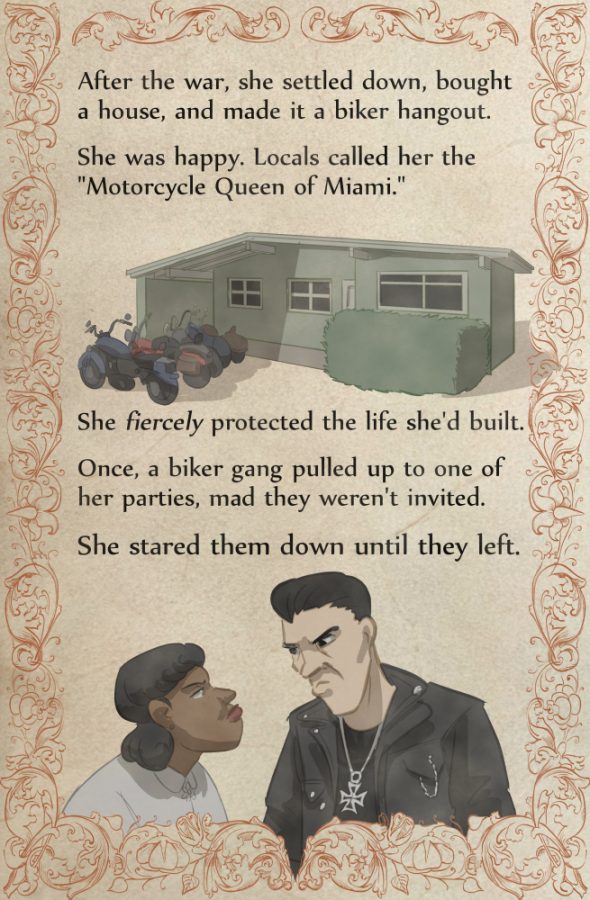 16 This was in the 1950s, after she’d put down stunt riding and become a cook, then a nurse. The gang who gave her trouble was the Outlaws Motorcycle Gang, who rode straight up to her door. When asked why they hadn’t been invited, she said, “Because you don’t belong to the Motorcycle Association of America.” Of their reaction, she said, “It didn’t set too well with them, but they didn’t harm me.” 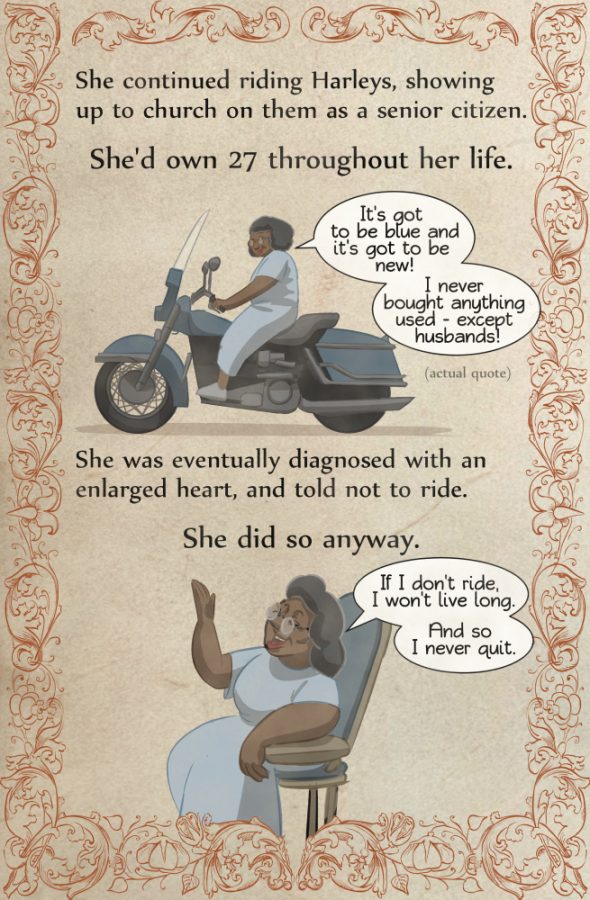 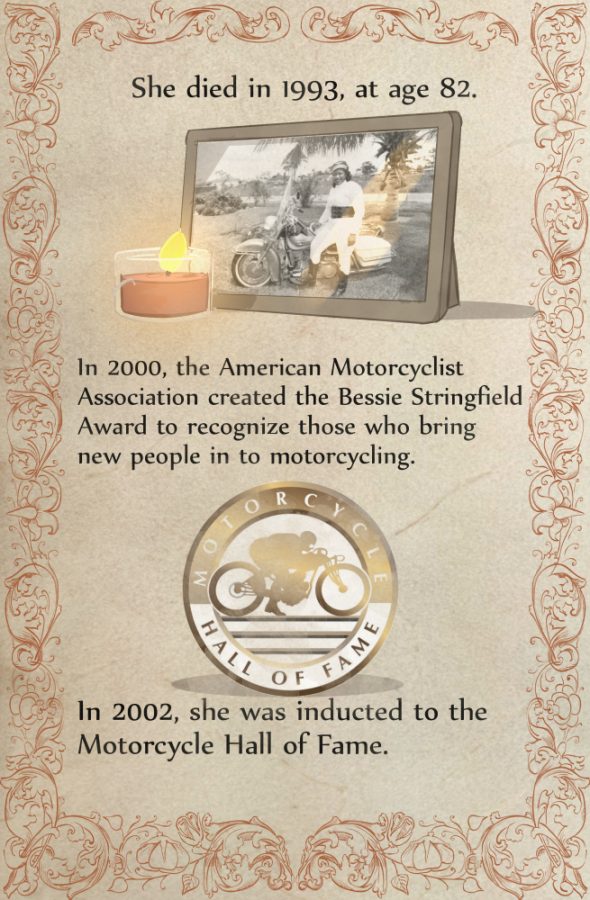 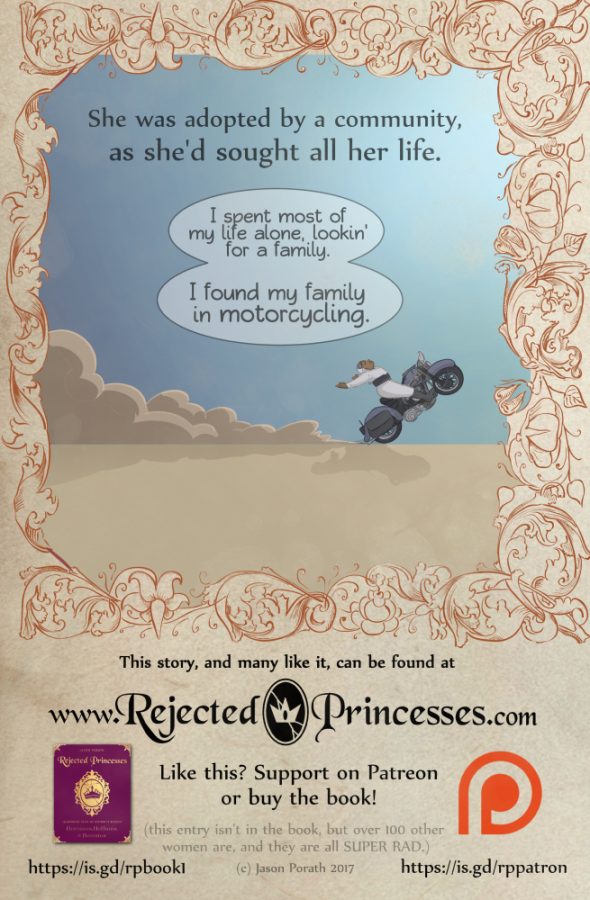 IMPORTANT UPDATE: Since first putting this online, the New York Times did a 2018 obituary on Bessie in which they tracked down some of her surviving relatives, who basically said she was telling tall tales on a number of finer points – nobody is trustworthy, haha! They claimed she was never adopted by white parents, and was not from Jamaica. Many of the stories of Bessie related in this telling (and virtually every other article on her) come courtesy of her official biographer, Ann Ferrar, who knew Bessie in life and wrote a few pages on her in her 1996 book Hear Me Roar: Women, Motorcycles, and the Rapture of the Road (which I cite below, in the citations).  She is working on a longer biography of Bessie — you can find more info here: http://www.bessiestringfieldbiography.com

I’ll excerpt a bit from the New York Times obituary, explaining how these untruths came to dominate the dialog about Bessie:

Ferrar had passed on some of the misinformation of Stringfield’s early life, wanting to keep her legacy alive. Asked recently about these untruths, Ferrar wrote in an email, “Bessie’s running from her early past does not discount or in any way lessen her unusual achievements as an adult, and that is why Bessie continues to inspire new generations, and rightfully so.”

“She asked me to tell her truth as her friend,” Ferrar said in an interview.

Whoof, couple of things to cover here! I guess first up I’ll cover the things I wish I’d been able to fit in but didn’t find room for:

As for the artwork, starting with the poster image:

Of the comic itself:

Good job guessing! My fave guess definitely had to be the typo “Best Stringfield” — she was, wasn’t she?

This Miami queen may have gotten married 5 or 6 times, but her only true love was named Harley.

Thus shall you be, proclaimed this rapist-hunting black knight, before lancing an orange.