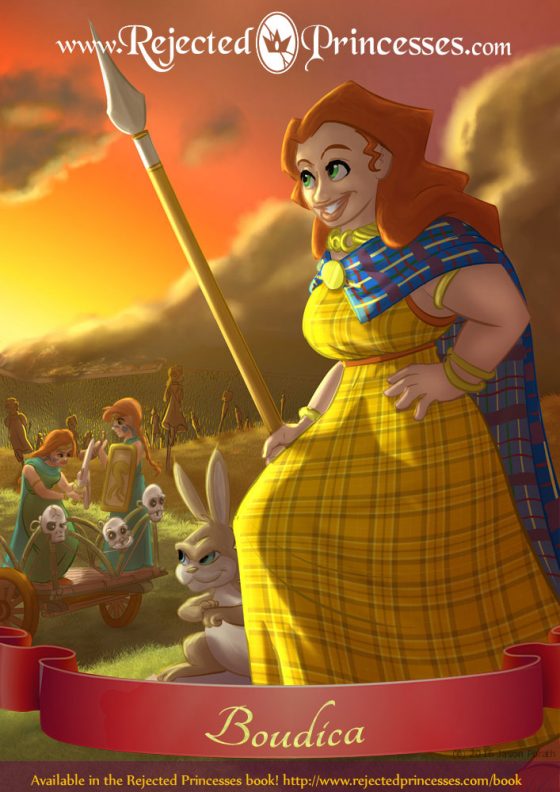 At the height of its power, Rome once seriously considered giving up its British holdings entirely. The reason? Queen Boudica, whose brutal revenge spree made her the Roman bogeyman for generations. She killed 70,000 people, burnt London to the ground, established herself as the most famous headhunter of all time – and to this day, Britain loves her for it.

You can stop emailing me about her now.

The first thing to know about Boudica (aka Boudicca, Boudicea, etc) is how little we know about her. We don’t know when she was born, how she died, where she died, where she came from, or if Boudica was even her name (as opposed to a title). However, what we do know, largely from two Roman historians, is enough to earn her a place in the badass hall of fame.

Boudica ascended to power when her husband, the king of the ancient British tribe of the Iceni, died. At the time, Rome was in control of Britain, and the Iceni had voluntarily allied with them. When the king died, he willed half his belongings to the Roman emperor, and the other half to his family — thinking that would solve any problems of succession.

It didn’t. Instead, the Romans, at the apex of their arrogance, set into action an outrageously poor set of decisions. Try to spot where things go off the rails:

You can probably tell at this point that the rest of this story isn’t going to go well for the Romans.

The amazing thing is, this was totally in line with the (local) Romans’ line of stupid moves! When Boudica subsequently raised a mob and began marching on the nearby town of Camulodunum (essentially a veterans retirement home), several other Roman blunders came to light:

Fun science fact: if you apply a sustained fire to an entire Roman city, you can turn it into a molten pile of sickly red clay.

Fun science fact: if you apply a sustained fire to an entire Roman city, you can turn it into a molten pile of sickly red clay. This fact comes to us courtesy of Boudica, warrior scientist of the first century, and the 6-inch-thick layer of detritus that is current-day Camulodunum.

She repeated her experiment with two other cities, including Londinium, the precursor to London. Along the way, her army, which had at this point become a roaming 230,000-man block party, killed an armed Roman legion, around 70,000 civilians, and became Rome’s worst nightmare. In order to understand how terrifying this was for Rome, one should understand some specifics of Boudica’s uprising:

Unfortunately, Boudica’s success had largely been predicated on surprise, and did not last long. When they went up against entrenched Roman soldiers, the Iceni fell apart. A mere 15,000 Romans were able to rout Boudica’s massive army, killing 80,000 in the process. So sure had the Boudican mob been of their victory that they’d brought their families out to the battlefield in wagons – wagons that later pinned them in from retreating.

Her methods are almost directly equivalent to tribal headhunters and religious extremists, but she’s held up as a vengeful heroine instead of deranged villain.

Boudica’s final fate is unknown. Some suppose she swallowed poison, and others that she was killed in battle. Her story was all but forgotten for centuries, until the rediscovery of documents from Roman historians. After that, she became a national hero of Britain in short order, soon appearing in textbooks, statues, and movies.

All this despite the fact that her methods of revenge – religious decapitation – are almost directly equivalent to the actions of more traditionally-reviled parties, such as tribal headhunters and religious extremists. Boudica’s actions are held up as those of a vengeful heroine, while the aforementioned others’ actions are decried as those of deranged villains. Food for thought.

More of you had trouble guessing this than I’d thought — considering I have gotten at least three emails a day for the past several months suggesting her! But still, a lot of you figured out the clue:

Address Orestes’ restlessness, get wrested and arrested by the rest.