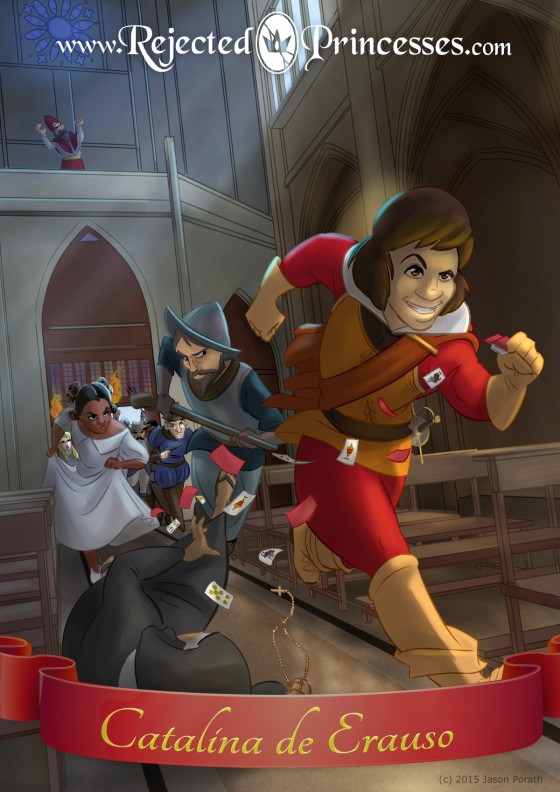 You know you’re in for a bumpy ride when you pick up an autobiography only to find that the author kills someone in a bar fight roughly every 5-6 pages. Such is the life of Catalina de Erauso, whose madcap disguised-as-a-man travels across South America come across like a 17th century episode of Cops. Her cycles of kill/hide/escape/repeat are so frequent that her story jumps rapidly from off-putting, to cartoonish, to… intriguing. For it’s only when one gives Erauso’s story a deeper inspection that her true cleverness reveals itself – after all, it’s not your everyday thug who is able to gin up a meeting with the Pope and get special dispensation to crossdress. More on that later.

Erauso started out her once-upon-a-times with a prison break and a clothing swap. Cooped up in a Spanish convent since from the age of 4, Erauso gradually grew more frustrated with her lack of freedom, not to mention the regular beatings from the nuns. So at age 15 she escaped her holdings, grabbing fabric to spin herself up a new costume, and thus a new identity. She was, however, not interested in Cinderella-ing herself up a pretty dress and a regal life: instead, Erauso made some dudes’ duds and took on the name “Francisco de Loyola.” She then set about chasing her dreams – which were apparently to drink, fight, and womanize.

She had the strength to chase her dreams – which were apparently to drink, fight, and womanize.

It cannot be stressed enough that, by today’s standards, Erauso was gleefully amoral, as was virtually the entire world she traveled in. The invasion of the conquistadors was still within living memory, for crying out loud – she was not a nice person, but neither was anyone else. So with that in mind, on to her adventures:

One of her most recurrent escapades was to kill someone, then seek sanctuary in a church. This started out at age 18 (or 11, depending whose version of birth year you buy) when she went to the theater, and a guy was rude to her, threatening to slice her with his sword. The next day, she used a whetstone to make a sawtoothed blade, hunted him down, and slashed him up. This came to a head months later, when he came back for revenge. She killed him and several of his friends, then ran to a church to seek sanctuary until the heat died down.

Evidently staying in the church until the heat died down suited her quite well, since she did it over and over again. Later she joined the army, getting put under the command of her brother (who didn’t recognize her). After banging his mistress for three years, he found out, they fought, she fled into a church, and… sanctuary! Later, she stabbed an army buddy in the chest over “a small misunderstanding” (gambling was involved). When a judge interceded, she sliced him in the face. Then she ran into a church, sanctuary! A year later, killed another dude over cards, fought the police, church, sanctuary! You get the picture.

An aside – I’ve mentioned her escapades with her brother’s mistress. This was not an isolated incident:

Back to her life in and out of the churches: after the judge-slicing, she stayed in a church for six months, surrounded outside by soldiers waiting to arrest her. She only left at the six-month mark to engage in a nighttime duel as a friend’s second. After killing her opponent, she realized it was her own brother, the army commander. This depressed her for almost a year (she wasn’t a monster). This is, in fact, the closest she gets to true introspection in the entire tersely-worded book.

Her retaliation, which boiled down to “stab him in police headquarters in broad daylight,” didn’t work out very well.

Over the years, her usage of the church grew to be incredibly cunning. Years later, she was sentenced to death for killing a sheriff’s servant. This had not been her brightest hour: the servant had insulted her, yes, but her retaliation, which boiled down to “stabbing him in police headquarters in broad daylight,” hadn’t worked out very well. So, sentenced to death and taking last communion, she spat it out and started yelling, “I CALL ON THE CHURCH” — apparently demanding to give her confession in a church. The pious townsfolk escorted her to the church, where she pleaded sanctuary and refused to leave. A month later, she skipped town.

In fact, it was through her usage of the church as a “get out of jail free” card that her secret came out. After killing several more cops (at this point it’s hard to even keep track of why) and taking sanctuary again, she realized she was in deep trouble this time. So she confessed to the bishop that she was actually a woman, and gave him a somewhat sanitized account of her life. Somewhat skeptical, the bishop called in some old women to, uh, verify her claims. Not only did they do so – but they reported back that she was still a virgin.

This was, evidently, a big deal. Erauso’s intact hymen somehow wiped clean the previous two decades of murder, and the 35-year-old was declared a blessed individual, provided she devote herself to god. She did so, eventually even making her way to Pope Urban VIII, who gave her special leave to pursue her life in mens’ clothing. He did, however, chide her to not harm anyone else, taking special time to remind her of the Do Not Kill commandment.

After this brief international bout of fame, during which time she wrote her autobiography, Erauso ran out the rest of her life in relative quiet – although she did cut one more guy in the face over a game of cards, for good measure. One of the last anecdotes she gives in her autobiography is of her meeting a cardinal, who remarks, “your only fault is that you are a Spaniard.”

“With all due respect,” she replies, “that is my only virtue.”

This one was difficult on you all! I am pleased.

Despite what her biography title might suggest, she did not actually lead a platoon of nuns.

Lieutenant Nun: Memoir of a Basque Transvestite in the New World by Catalina de Erauso (translation by Michele and Gabriel Stepto). This has some great stuff in the foreward that helps set the time and place of the story, as well as some insightful translators’ notes.

Onorata Rodiani
When an unrequited admirer began threatening her, this early fresco painter became one of history's first warrior artists.

This ancient woman (or horse?) was given an iron leg — possibly the first one ever — to keep her going. 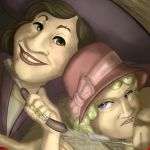 The Queens of the Sydney Underworld