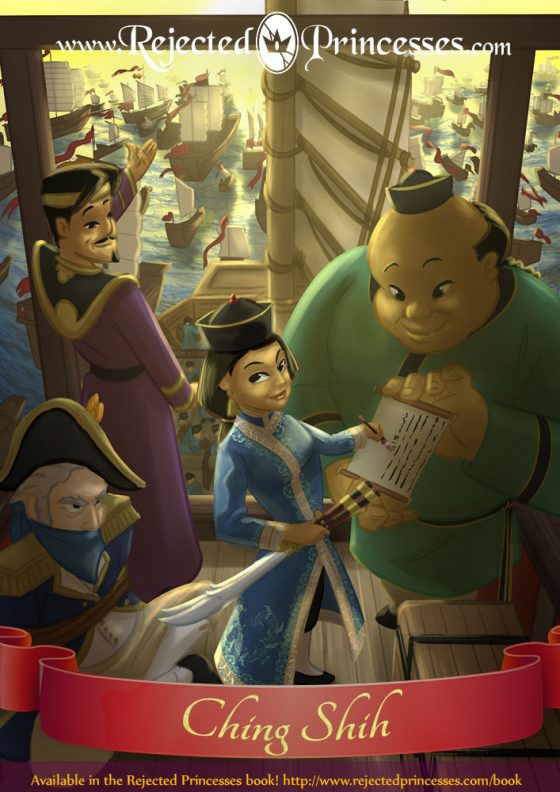 In 1809, the Chinese government sprang a trap. They were gunning for a group who’d taken control of its southern waters, the Red Flag pirate fleet. Blockading them in a bay, the authorities laid siege to the pirates for three straight weeks with an overwhelming amount of firepower. In the end, the Red Flags strode out through a graveyard of government ships, largely unscathed. At the head of the Red Flags stood one of the most fearsome pirates in history — Ching Shih, a former prostitute turned leader of over 70,000 men.

Getting accurate information on Lady Ching is a bit difficult. Nobody knows much of her early life. Even the name Ching Shih isn’t her own — it translates to “widow of Ching”, her late husband and commander of the Red Flags before her. We do know that before her husband died, he (and by extension, his fleet) was so renowned that the Emperor gave him the title “Golden Dragon of the Imperial Staff,” effectively promoting him to the rank of prince — and thus, one could argue, obliquely making her a princess.

“Under the leadership of a man you have all chosen to flee. We shall see how you prove yourselves under the hand of a woman.”

When he died unexpectedly, Ching Shih took on the family business, assuming control of the Red Flag fleet. According to legend, following her husband’s death, she summoned the scattering fleet captains and announced: “Under the leadership of a man you have all chosen to flee. We shall see how you prove yourselves under the hand of a woman.”

She was a leader unlike any they’d had before. Where her husband had been brash and loud, she was quiet and calculating. Soon into her rule, she took a charismatic man named Chang Pao as her husband and installed him as head of the fleet. This proved a savvy move for a number of reasons. Chang Pao had been her husband’s right hand man (and lover… and adopted son… yeah, it’s a bit weird), and was widely respected among all the pirate fleets. Moreover, he was an illiterate fisherman’s son (he’d been taken by the pirates as a child and received little to no schooling), and likely easy to manipulate.

Under Chang Pao’s name (and Ching Shih’s guiding hand), many unruly pirate fleets united under the Red Flag banner, eclipsing the size of all other pirate groups. Every single ship, no matter how small, was given an edict from Ching Shih to display in a common area. This outlined an incredibly hardcore code of conduct:

It is telling that one of the primary sources on Ching Shih’s life was a Westerner she’d imprisoned for three months while setting up his ransom.

It is telling that one of the primary sources on Ching Shih’s life was a Westerner she’d imprisoned for three months while setting up his ransom.

Under the leadership of Ching Shih, the Red Flags were unstoppable. As previously remarked, the government (with the help of the Portuguese) made a concerted effort to isolate and kill her in late 1809. That didn’t happen. When the government sent “suicide boats” — ones loaded up with straw and explosives, set on fire, and launched at the pirates — the Red Flags extinguished the flames, repaired the ships, and incorporated them into the fleet. In the end, the pirates lost 40 people and lost not a single ship. The leader of the government expedition falsified the reports to make himself look better and later committed suicide in shame.

Eventually, the government’s persistent interference became too troublesome for even Ching Shih, and she put up her swords — but here, too, her genius shines through. Instead of merely negotiating amnesty by informing on her shipmates, she spent months bargaining with the government. The end result: she actually retired. The government gave over a big chunk of cash, cancelled all warrants for her, and made Chang Pao lieutenant in the Chinese navy. One of his first acts? Using the government forces to destroy their old pirate rivals.

According to most sources, Ching Shih spent her final years running a brothel and gambling den. She died at age 69, a wealthy and widely-respected woman.

Pingyang
This unlikely heroine created her own Woman's Army of 70,000 soldiers through good manners and political savvy - and then used it to overthrow one of China's greatest douchebags.

What? You SAID you were thirsty, Cyrus.