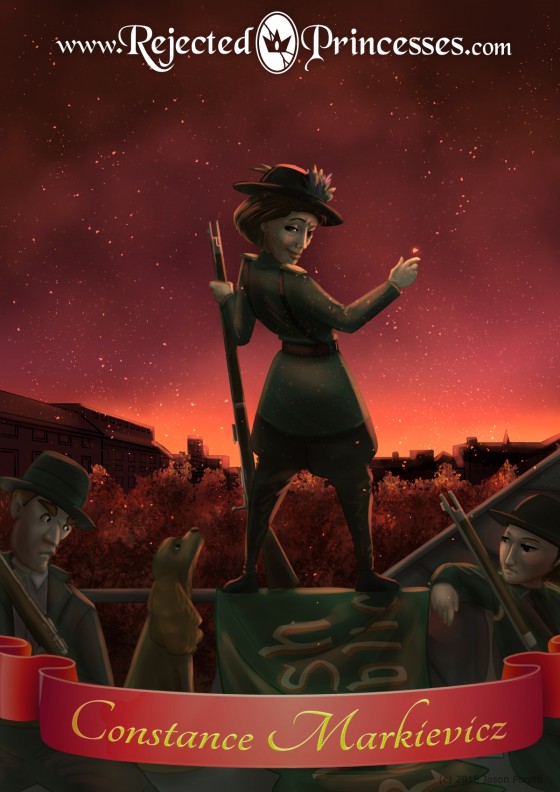 Dublin, 1916. Several British officers were, as was tradition when occupying territories less than friendly with Britain, blithely enjoying lunch without a care in the world. Suddenly, their meal was given a extra bit of local garnish: shards of glass falling into their plates from windows shattered by gunfire. Ducking for cover, the officers pulled out revolvers and began shooting in the direction of their opponents — only for the British gunfire to be returned expertly by a woman who would come to bedevil their every moment.

This was Countess Constance Markievicz, a socialite who’d traded gowns and balls for guerillas and bullets. Weeks later, during her military trial, a young man would describe her assault on British officers to the court — and again, she responded with blistering firepower. Browbeating the witness into tears, she savaged his testimony until he recanted and changed his statement. All the while she dared the officers standing around to shoot her. 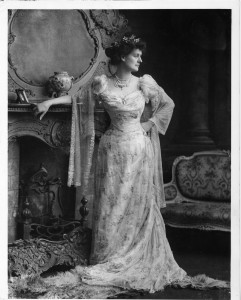 Countess Markievicz In Ball Gown Circa 1900

Born Constance Gore-Booth, Madame Markievicz (a title she preferred to countess) was not exactly predestined for a life in the trenches. The daughter of well-to-do landlords, she dismayed her bourgeois family through stubbornly refusing to marry for many years – until she went to art school and there met the penniless Count Casimir Markievicz. After a peculiar courtship1 He was actually married when he first met Constance, but in a horrific coincidence, his wife and youngest son died in the first week of them knowing one another. No, Constance didn’t have anything to do with it. that saw Casimir duel men who’d insulted her, the two married. During their wedding vows, she rather notably omitted the part about obeying her husband.

However, it was soon clear she wasn’t cut out to be a wife or a mother. Constance’s daughter Maeve, as she grew up, was raised by her grandmother instead of Constance herself – to the point that when the two met as adults, they didn’t recognize each other. Similarly, Constance and Casimir’s relationship cooled significantly in the years after their wedding. The root cause of both areas of neglect was Constance finding her one true love: her country.

Now, Ireland was in rough shape. Centuries of war with and neglect from Britain hadn’t done the nation any favors. Tax and rent money largely went to England, instead of being invested in Ireland – thus resulting in recurrent crises of poverty, plague, and famine. This extended visit from the apocalyptic horseman quartet understandably cheesed off many of the Irish, and they began to form secret groups devoted to self-rule. It’s into these groups that Constance soon fell.

She was not welcomed with open arms. The malcontents of Irish society, largely working-class folk, eyed the smartly-dressed countess with suspicion and outright antipathy. Only through many years of effort did she earn their trust. She stopped standing during God Save the King. She started giving speeches urging outright rebellion. She started a youth training camp that taught boys to shoot the British — and taught the shooting herself.

She soon became an icon of sorts for the women of the rebellion. When asked fashion advice, she told women to “dress suitably in short skirts and strong boots, leave your jewels in the bank, and buy a revolver.” In later parades, she showed up so heavily armed “that the casual onlooker might be readily pardoned for mistaking her for the representative of an enterprising firm of small arms manufacturers.”

“Dress suitably in short skirts and strong boots, leave your jewels in the bank, and buy a revolver.”

During one notable procession of the English king through town, she waved a black flag in protest, amidst a sea of the king’s supporters. One royalist showed his disapproval by hitting her on the back with his Union Jack flag – only for the stick holding the flag to abruptly break in two across her shoulders.

This was to become a metaphor for her life.

Constance’s aforementioned assault on the British officers was part of the Easter Rebellion, an uprising where the Irish forces2 There were many groups involved here, so I’m referring to them vaguely out of a need for brevity. Two of the main entities were the Irish National Volunteers and the Irish Citizen’s Army. The rebels were generally referred to as the Sinn Féin, although at the time that was technically a separate political entity. Over the years, they’d form and reform, and many became the basis of the Irish Republican Army. stormed the center of Dublin and took over much of the city core. This was the culmination of endless years of failed diplomacy, bilateral pigheadedness, and unaddressed colonial brutality that had led the rebels to take up arms. The Easter Rebellion was genuinely shocking: the core of Dublin essentially turned into a battlefield. Overturned cars made for makeshift barricades, British artillery shells rained down on city buildings, and dead soldiers lay unattended in city parks. 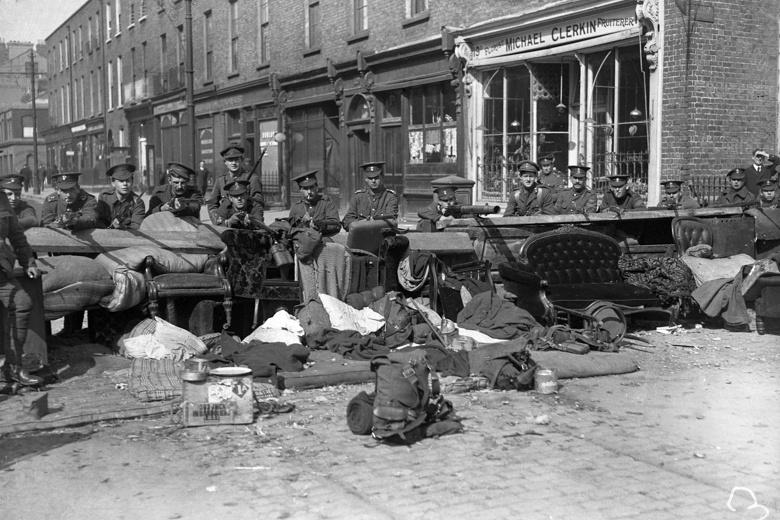 During the early rebellion, Constance was everywhere – nursing, sewing a rebel flag, and delivering messages as one of the highest-ranking members of the rebellion. Soon into the conflict, she settled into her role as a sniper. Holed up at the College of Royal Surgeons, she spent the majority of the Easter Rebellion on the rooftop, shooting at royalists at the nearby Shelbourne Hotel.

The rebellion was ill-fated. The English overwhelmed the isolated (and soon starving) pockets of rebels with superior numbers, training, and equipment. A week in, the rebel leadership spread the order to surrender. Upon receiving word of this, Constance turned herself in with maximum theatricality: gently kissing her gun before handing it over and declaring, “I am ready.”

While many of her cohorts were executed by firing squad, her execution was commuted to life imprisonment. It was an act of mercy she met with fury: “why didn’t they let me die with my friends!?”

The Government in Hiding

She was not to stay in jail long. Although the Easter Rebellion had initially swayed public opinion against the rebels, the British nimbly snatched defeat out of the jaws of victory. In brutally executing swaths of Irish citizens — including pacifists and civilians who had nothing to do with the rebellion — the British turned the tide against them. In the span of several years, opinion had swayed so heavily that Constance and many of her cohorts were released from prison. This was not a universally popular call, though – and she was to be reincarcerated regularly, often with little to no specific cause, throughout the rest of her life.

Each time she exited prison, time (and Irish society) seemed to skip forward rapidly. During one of her stays, she was even elected to parliament, making her at the time one of the only female politicians in office anywhere in the world. In fact, the rebels, under the banner of Sinn Fein, had taken a majority of the parliament seats, and set about establishing an Irish Republic separate from the British.

The brutality of British relations escalated quickly after the elections. Hiring bands of ex-soldiers and mercenaries3 Specifically, the Black and Tans and the Auxiliary Division. They would shoot civilians on sight, and not hesitate to burn down a building if they thought it harbored a militant. This apparently got so bad that entire rural towns took to sleeping in the fields at night to avoid being caught in burning buildings. This barely scratches the surface of the war crimes committed here – it is complex but ultimately tangential to Constance’s story, so I’m breezing over it here. It’s worth a google search, though. to subdue the population, the British actively hunted down the Irish Republican government (the Dáil Éireann). Constance and her government cohorts thus spent much of their time on the run. This period showed much daring on her part:

The years of conflict and the long periods of quiet prison contemplation dulled Constance’s fervor. While still quite militant, she became one of the rebellion’s more sympathetic members, negotiating between the jingoistic arm of the party and those interested in helping out the common man. She reconnected with her sister, husband, and daughter, and strengthened bonds there. She even became somewhat religious.

After several years, the rebellion itself met dark days. After members of the Dáil, upon threat of renewed war from England, agreed to a treaty that kept the nation subservient to the British crown, the rebels split into two camps and began an outright civil war. While the treaty drove many British out from Irish government, their local replacements were regarded by the militant rebels as scarcely different from their forebears. This led to another unsuccessful bloody conflict in which Constance again served as a rooftop sniper — this time against her former comrades. After it, too, failed, Madame Markievicz permanently laid down her arms.

She spent her final years doing what personal good she could. She became an avid motorist and accomplished mechanic — due to how often her car would break down, the public often caught sight of a middle-aged Constance in her underwear, fixing her malfunctioning car. This skill proved useful when, due to a labor strike, coal became scarce in the middle of winter. She began driving to the mountains, hauling back coal and distributing it to senior citizens who couldn’t easily fend for themselves.

She died in 1927 from complications related to appendicitis. Long years of hunger strikes, police brutality, and guerilla warfare had weakened her body significantly. She was 59. 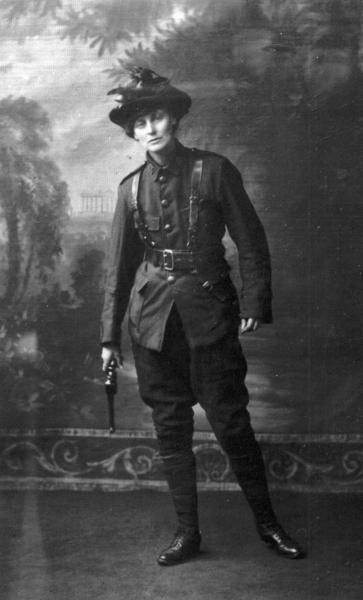 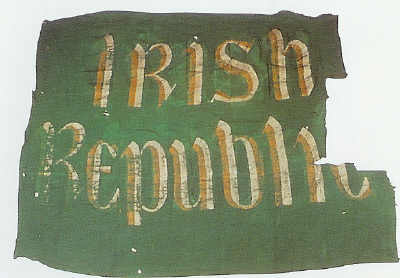 Lot of people guessed Bonnie Parker on this one! Huh!

Get your skirt short, your boots strong, your jewels banked, and your revolver cocked.

Van Voris, Jacqueline. Constance de Markievicz: In the Cause of Ireland.

No father? No husband? No will? No help? No way this hard-as-iron Pennsylvanian was going to give up her family’s business. 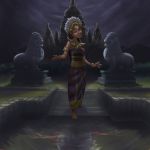 The Widow Queen of Indonesia