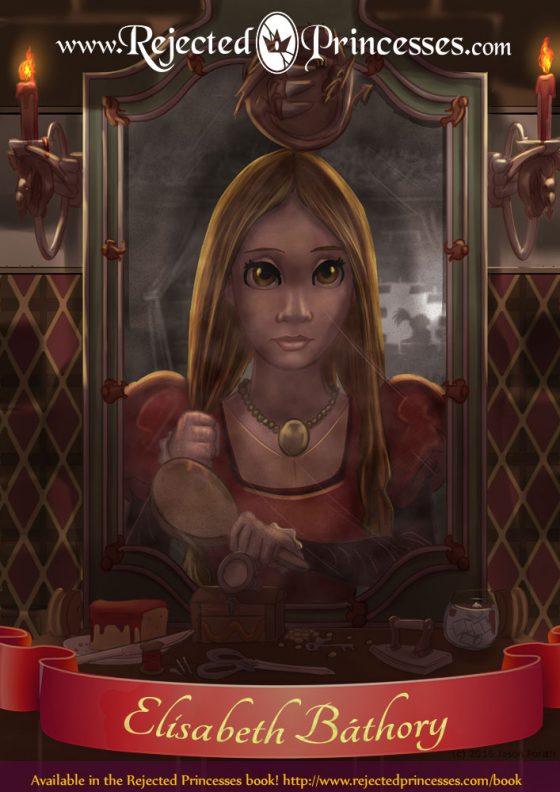 First off: trigger warnings. All of the trigger warnings. No trigger unwarned. (okay, fine, it’s actually just triggers for gore, violence, rape, incest, and murder. I think that’s it. but, um, tread lightly regardless.)

Now then, let’s take a step into the life of one of the most vilified women in history. On December 29, 1610, a garrison of soldiers stormed the Hungarian castle of Cachtice and arrested Elisabeth (Erzsebet) Bathory. They accused her of roughly a hundredSaw movies worth of torture, and took her into custody. As the story goes (and please keep in mind, absolutely NONE of this should be taken at face value), they caught her in the act, finding a freshly-buried corpse and a cowering servant, badly beaten but still alive.

There were literally so many charges levied against her that when I typed them all out, it took up 10 single-spaced pages.

The subsequent questioning of over 300 people into the doings of the Blood Countess (as she’d later become known) has put her in the record books as easily the most prolific female serial killer in history, by an order of magnitude. The low-end estimate for her body count (and this was the number given by her closest associates and allies, mind you) was *just* in the thirties. The high-end estimate was 650, all servant women. The collected testimonials contained a litany of charges against her so vile that they have literally become legend – she would later be used as one of the primary inspirations for Bram Stoker’s Dracula, and her story has been referenced in hundreds of books, movies, songs, you name it. There were literally so many charges levied against her that when I typed them all out, it took up 10 single-spaced pages (I’ve since edited it down).

So let’s make a drinking game of it. The rules are simple: every time you’re grossed out, take a shot. I hope you have a full bottle or a strong stomach. Here we go, then!

According to the surviving testimonials, she and/or her closest servant/confidants:

She was accused of casting a magic spell to summon a cloud filled with ninety cats to torment her enemies.

And that’s just the charges levied against her in her lifetime! After she died, more details were added to the picture:

So after all this went down, the sentences went into effect almost immediately. Her female “accomplices,” all old ladies, first had their fingers torn off with iron tongs, and, once fingerless, were bodily tossed into a large fire. Her one male “accomplice”, being less of a participant to the supposed crimes, was shown a tremendous amount of mercy: he was decapitated *before* they tossed his body into a fire. And Elisabeth Bathory herself was “immured” — which is to say, bricked up into a room in her own castle, where she died four years later.

In conclusion: the aristocrats!

Well, actually, no. That is not the conclusion. Buckle up, for I am about to dump the biggest bucket of cold water on all this malarky as I can possibly muster. Based off of the evidence, there is a case to be made (one which I believe to be true) that Elisabeth Bathory is innocent.

Now, this is not to say she was a nice person. The overwhelming impression one gets from reading all these documents (an act I do not recommend you do in one sitting — learn from my mistakes) is that she was a take-no-crap kind of lady. Her husband was off at war, and she had to manage an INCREDIBLE amount of stuff in his absence, even before he died – thousands of servants, governing the local populace, and handling an amount of property second to none.

And so, Elisabeth Bathory needed everyone around her to know one thing, and one thing only: she was Head Bitch in Charge, and she had no time for your shit.

Her surviving letters illustrate this beautifully with their overwhelming curtness (even to her husband!). My favorite thing she ever wrote was to an encroaching squatter: she ended it by saying “do not think I shall leave you to enjoy it [settling illegally on my land]. You will find a man in me.” — a saying that translates roughly to “I will crush you.”

So no, she was not warm and cuddly. I absolutely believe she made life shitty for misbehaving servants (or, more likely, had her head servants do it for her). It is beyond questioning that she beat the hell out of them, and some undoubtedly died from it – I mean, she had thousands of servants in an age before penicillin. In fact, one scholar claims that the more outlandish tortures (stinging nettles, metal rods, amateur acupuncture) were contemporary folk remedies. Tough, mean lady? Yes. Cartoon supervillain? Hell no.

So what happened? George Thurzo – Palatine of Hungary and dickass extraordinaire – did.

Now, I already said Elisabeth was powerful, but you need to get the magnitude of the target she was: the Bathorys were like the Hungarian Kennedys and had been for centuries. By the time all this went down, Elisabeth’s cousin Gabor (earlier mentioned) was gunning for the throne (literally was starting a war), and Elisabeth was widowed, with more money than god. So Thurzo was like, “oh hell no, I am not letting those two partner up,” and decided to take Elisabeth down.

Now, the details of the plot are a bit murky. Thurzo was a known schemer who’d made a career out of backstabbing people, so a plot wouldn’t be much of a surprise. There’s evidence in correspondence with his wife (who kept forgetting to write in code) that Thurzo was moving against Elisabeth over a year earlier. He’d been in contact with the local church leaders, who were whipping up the general populace against the Bathorys by telling them stories – stories that would, with minor variations, be repeated over and over in the proceedings against Elisabeth, passed off as “I heard this” but with very few saying they’d actually seen it.

And that’s just the cooperating witnesses. In all likelihood – it was standard operating procedure at the time – the members of Elisabeth’s household were tortured before testifying. Their testimonials, which are confused and contradictory, lend credence to that.

The only way to get rid of such an entrenched power as Elisabeth was to catch her committing a horrific act red-handed – which Thurzo said he did, although it took him 24 hours to produce said evidence. Afterwards, they never had a trial (despite the king demanding one for three years straight). Elisabeth never got to speak in her defense and her family records were mostly destroyed. There is very little to go on in determining what sort of a person she actually was.

So, even if she did commit said acts (which is possible, although  nowhere near the scale of the accusations), ask yourself what is more likely: an incredibly outlandish list of violence perpetrated by a cadre of old women over decades; or, an orchestrated persecution against a powerful, harsh, and independent woman – in the age of actual witch hunts, no less!

Oh boy, I spent a lot of time figuring out just how to represent Lady Bathory. I am happy with how it turned out. Here’s the thought processes and callbacks:

Around a hundred people wrote in to suggest Lady Bathory over the past three weeks, but the credit for the original suggestion must go to my friend Astrid Phillips Mayer (genius brand strategist and champion of female empowerment!), who suggested it way back in February, when I first had the idea to do this project.

Giving the people what they want: 90 cats from a cloud.

Primarily, I cited Tony Thorne’s “Countess Dracula: the life and times of the Blood Countess, Elisabeth Bathory.” I looked at some other sites and books to gather a more complete list of the rumors against her, but given Thorne’s extremely extensive work (his book is exhaustively sourced), I felt comfortable relying mostly on him.

Update: As I note at greater length here, a new paper emerged after this entry was written, which argues that the gender politics against her were overstated and that she was not as powerful as Thorne made her out to be. I’ve not gone through it yet (it’s 200 pages long), but you can find it here: http://ir.library.illinoisstate.edu/etd/135/

Sourcing the Elisabeth Bathory entry
I get a ton of people calling me out on relying too much on one source for the entry on Elisabeth Bathory. The truth is, though, there wasn't much worth going on.

Stepping away from violent women for a while, and heading back 7 decades before Rosa Parks.