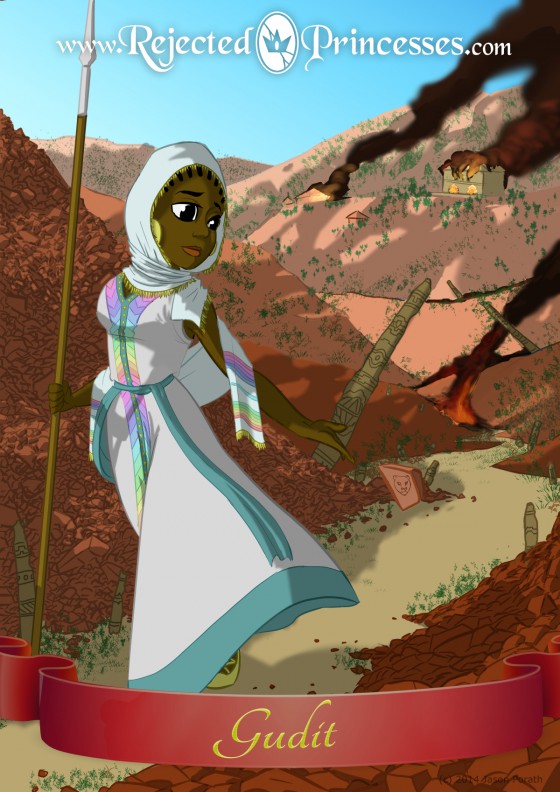 This week we visit one of the most complex figures ever represented here: Gudit, a Jewish Ethiopian queen, hero to some and villain to others, who took over the country and dramatically ended a millennium-old dynasty dating back to King Solomon. Or… she didn’t. This story zigged and zagged in unexpected directions on me during the research — so let’s go tumble down a rabbit hole together, shall we?

I’ll be honest — this entry got WAY more knotty than I’d initially anticipated. I chose Gudit because… warrior queen! Ethiopian Jews! Stuff I didn’t know anything about! But the story of this entry ended up being a lot about how we decipher history, and how the sausage is made. If that ain’t your jam, join me at the bottom (skip until you see the words “TL;DR”).

Down a Rabbit Hole

So – like me, perhaps you were unaware that there is a long (very long!) tradition of Ethiopian Jews. If you’re up on your Old Testament, you may recall a cameo by a certain Queen of Sheba (Miss Sheba if you’re nasty), where she showed up to King Solomon’s court, was like, “I guess this is pretty alright or whatever,” and then took off. Well, according to the Ethiopian Jews (today called Beta Israelis, although traditionally they’re referred to as Falashah – which is sort of an insulting term, so I’m defaulting to Beta Israeli), it didn’t go down like that. There’s a couple variations, but the story I found most was this: while Miss Sheba was crashing at Solomon’s place, Solomon was like, “hey Miss Sheba, you can totally stay here, just don’t steal anything.” Sheba was all like, “uh, okay, whatever. I am a QUEEN, you know that, right?” Except here’s the thing: Solomon fed her super-spicy food for dinner, so she had to get some water during the night. When she went for some, Solomon popped up (apparently he was just creeping outside all night) and was like, “oh no you didn’t just drink my water! That’s straight-up THEFT!” And then somehow this so impressed her that they hooked up and had a kid: Menelik, the first king of Ethiopia.

(to the lady-wooers in the audience: that is not okay. it will impress absolutely fucking nobody. do not do it on a date. that shit will end with you in jail.)

Some time later, some people were converted to Christianity, while others weren’t. The (amazingly well-documented) Christian lineage set up camp at Aksum, and everything was relatively hunky-dory for 600 years or so… until Gudit showed up and wrecked some shit.

So, Gudit. There’s three basic traditions about her, which I’ll summarize, Rashomon-style, before getting into what scholars believe might actually have happened.

Gudit was born to a Beta Israeli king named Gideon, and was a cool gal! But the Aksumites were all, “pay us taxes!” and the Beta Israelis were like, “I don’t wanna.” The Aksumites sent in an army to get their money. In return, Gudit burnt their shit down and set up a new dynasty, which ruled for a couple generations.

2) The Chronicle of Ethiopia

There once was an Ethiopian princess named Gudit (or Yodit, or Esato, or Ga’wa), who had a totally legit princess lineage. But she burnt down a church, overturned funeral markers, and plugged up water sources, turning parts of Ethiopia into a desert – because reasons. During all this, she ordered her soldiers to each leave a single stone in a pile just to show how big her army was. The stone pile made for a straight-up mountain. Also she ordered all the churches closed because she converted to Judaism and was like, “man, screw other religions!” She ruled for 40 years. When she died, everyone brought out the ark of the covenant (which, surprise, they’d been hiding from her) and were like, “yay we’re Christian again!”

In a masterstroke of bizarro-thought, they said, “the boy’s only 20! He was defenseless against her womanly wiles. We aren’t charging him with anything, but we’re cutting off her right breast and exiling her.”

3) The, uh… more salacious Chronicle of Ethiopia (both of these were from the same master source)

Once upon a time there was a prostitute named Gudit! She seduced a 20-year-old kid, and asked him to get her some gold shoes. The kid did so by going to the super-secret Treasure Vault of Zion (where they keep the ark of the covenant) and ripping up a gold curtain there. The townsfolk went on a Cinderella-style witch hunt, trying to find whose feet were the same size as the hole in the gold curtain. Once they found Gudit, in a masterstroke of bizarro-thought, they said, “the boy’s only 20! He was defenseless against her womanly wiles. We aren’t charging him with anything, but we’re cutting off her right breast and exiling her.” She then went to Syria, married the king, raised an army, and invaded Ethiopia.

So it’s kind of he-said, she-said, right? At points like these, it’s useful to turn to outside sources, and stuff we can prove. Here’s what’s known for sure:

Here’s where it goes from confusing to mind-boggling. A list of possible dopplegangers includes:

I’ll spare you all the malarky involved in deconstructing all this messed-up info and putting it on a single timeline, but the main idea put forth from all this research, best I can tell, was this:

And that, kids, is how the sausage is made.

In the late 900s, a Christian Ethiopian (Aksumite) king died while out partying with his army in the desert. His two sons started bickering over succession. An Aksumite (not Beta Israeli!) girl, whom we’re calling Gudit, stepped up to the throne and ruled for around 40 years. She established good relations with other countries, and started a new dynasty, which cheesed off other surviving Aksumites. Some time later, other Aksumites (probably some of the descendants of the aforementioned bickering sons) took back over and promptly started delegitimizing everything she’d ever done by talking shit about her. Years later, when Beta Israelis (notably Gideon and Judith) actually started wreaking havoc on the ruling class, she was retroactively identified with them — until Gudit’s story became “she killed everyone! Why? Because she was a Jew!”

And that, kids, is how the sausage is made.

Mother of god, a lot of you guessed correctly this week. Thankfully the new guessing submission system makes it a lot easier for me to keep track of that (thanks everyone for utilizing it!). The smart folk who got it right (and I’m taking off some of you sneaky devils who voted twice!) are:

(you can probably see why I’ve started using a form)

The next entry is probably going to fling you into an area of history you didn’t know existed (I certainly didn’t). So here’s the hint: What comes before Gamma Israel and after Aksum’s king?