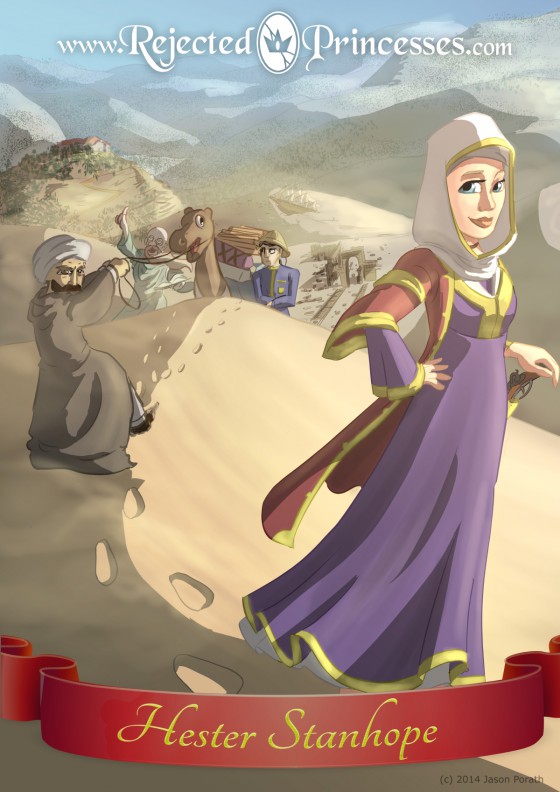 100 years before Lawrence of Arabia, Lady Hester Stanhope abandoned her aristocratic British life to travel around the Middle East by herself, adopting local customs and making it her home. She survived shipwrecks, plagues, Bedouin attacks, and developed a reputation so great that the Sultan himself couldn’t say no to her. And she did so while giving zero fucks.

From the start, Hester’s zero-fucks policy didn’t endear her to British high society. A typical example comes from a costume soiree she attended, where one of the guests brought a live donkey. This apparently being an 18th century frat party, everyone loved the ass (and the donkey he rode in on) – save Hester. After listening to the donkey bray for a bit, she turned to its owner and cheerfully informed him that the donkey was smarter than he was.

As if being a 6-foot-tall sarcastic spitfire wasn’t bad enough for her social life, she also had a mad scientist for a father. In between making her raise turkeys (to better her virtue) and randomly holding knives to her throat, he’d conduct “experiments.” Such as the time he invented a new fireproofing material and tested it by inviting the mayor over for ice cream and then setting the house on fire. Thankfully, the mayor was fine — ice cream didn’t even melt.

As she approached middle age as an old maid, Hester said “fuck it” to Britain and decided to go exploring by herself. One of the first things she did in her trip around the Mediterranean was show that she was far from an old maid, by taking on a lover 12 years her junior, whom she kept around for the better part of a decade. One of the second things she did was survive a shipwreck.

The shipwreck, which everyone survived by rowing to a nearby island, served as a turning point for her. Stranded in a rat-infested windmill with plastered sailors for days, she started feeling, not without reason, that if she could survive that, she could survive anything. So instead of returning home, she pressed on into the Middle East — where she was greeted as a princess.

She strictly adhered to the old Ghostbusterian adage: “if someone asks you if you’re a god, you say yes.”

Her reputation as royalty was due to two things. First, almost nobody in that part of the world had ever seen a European woman before. Second, she strictly adhered to the old Ghostbusterian adage: “if someone asks you if you’re a god, you say yes.” This worked out pretty well for her. Holy sites in Jerusalem were cleared out for her arrival. Vendors at bazaars would stand at attention when she entered. She rolled with a posse a hundred men deep.

Her reputation, however, went from “anomaly” to “legend” when she decided to go to Palmyra. A Syrian city once ruled by the legendary queen Zenobia, Palmyra was then all but inaccessible. The only path was through 60 miles of unmarked desert, occupied entirely by Bedouin brigands – whose main source of income was the ransom of wealthy people. The last time a sheik had set out to Palmyra, he was next seen wandering out of the desert, naked. Literally everyone, especially the locals, tried to prevent her from going.

She went anyway. To do so, she quietly ditched her traveling companions and took up with a pack of (friendlier) Bedouins. The journey wasn’t smooth – the Bedouins got the idea to scare her into giving her more protection money by pretending to abandon her in the middle of the night. In response, she stood in the middle of the camp with a gun in each hand, and assumed her best “come at me bro” stance until they came back. They came back, tails between legs, and shortly thereafter she was the first European woman to ever set foot in Palmyra.

For years after that, her life was one achievement unlocked after another. She was the first woman to enter the strictly anti-female monastery of St Anthony (she forced her way in and served them dinner). She organized an assassin to take bloody revenge for her murdered friend. She deciphered an Italian treasure map and unearthed part of a buried city — making for the first modern archaeology excavation in the Holy Land.

As part of that trip, she dug up a 7-foot-tall statue, which she promptly broke into bits and threw into the ocean. While that sounds, well, horrible, it was a smart move on her part. Her reputation had grown to the point where locals literally thought she could turn the statue into gold, and that she was going to steal from them to give to the British. By breaking it, weirdly enough, she earned their trust and respect.

In her latter years, though, her life began to unravel. Much like her father, she developed a form of megalomania and started to believe her own press, thinking herself Queen of the Jews (as a fortuneteller had told her years before). She gave away her wealth to help nearby refugees, while simultaneously pushing away and mistreating her longtime friends. She constructed an elaborate complex for herself in Lebanon, with winding mazelike hallways, spy holes, and even a prison. She began to hate her native England, writing the newly-installed Queen Victoria with vitriolic instructions on how to govern. She isolated herself more and more with each passing day.

Her last recorded act was to order the construction of a final wall sealing her into her own home. She died several days later, impoverished and alone. Her reputation had become such a point of contention that even her eulogist was unsure how to best describe her, ending his description with the summation that “she was wholly and magnificently unique.”

Sorry for the last-minute change of hint on you all — book stuff got in the way. Nevertheless, WAY more of you got this clue right than for the other person. Nevertheless, it was not Gertrude Bell, you silly Googlers! She was neither 100 years before Lawrence of Arabia, nor was she ever shipwrecked! :D

Lawrence of Arabia followed in the century-old footsteps of this shipwrecked “Desert Queen” – who herself was following the much older ones of fabled Queen Zenobia.

Mostly I relied on the Travels of Hester Stanhope in Araby, by John Watney, which was synthesized primarily from her diaries and Meryon’s writings. The author clearly has a soft spot for poor beleaguered Meryon, which I tried to get across in the illustration.

This South American Lady of the Lake kept the sword for herself.

Next: Iara
Prev: Ranavalona I