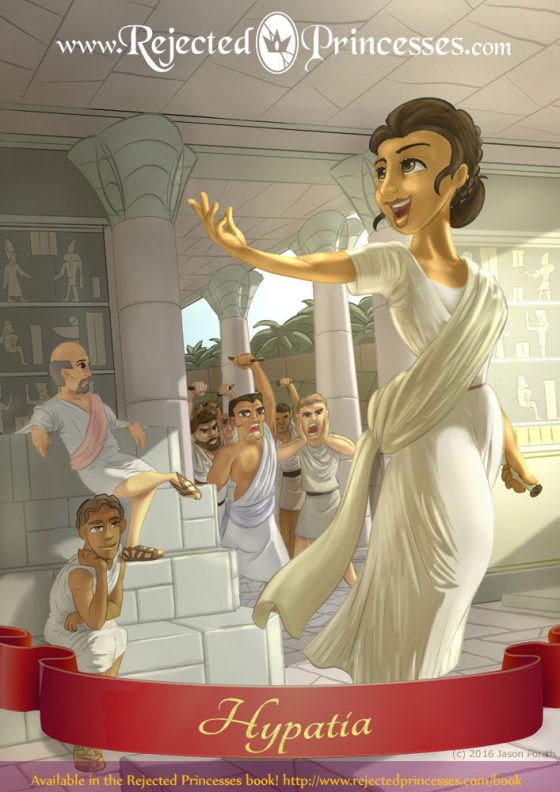 There are few women whose legacies have been more of a political football than Hypatia of Alexandria. She was not only possibly the last scientist with access to the books of the Library of Alexandria, but the first female mathematician in recorded history. She also was an expert astronomer, philosopher, physicist, and overachiever. Unfortunately, Hypatia was killed by a mob of Christian zealots in particularly grisly fashion, turning her life story into a point of contention for centuries to come.

We don’t know a ton about Hypatia for sure, but we do know that, unlike a lot of women at the time, she was firmly in charge of her own life. By most accounts, she never married (although she turned down many proposals), instead becoming headmaster at the contemporary equivalent of Yale. She regularly met with the town magistrates, who all agreed that she knew what she was talking about. According to one account, she would regularly walk into the middle of town and engage random pedestrians in discussions about Plato and Aristotle, like the world’s most hyper-educated sidewalk busker.

The problem was, Alexandria at the time was politically unstable, resulting in a lot of people wilding out on the regular. A months-long series of incidents (originally stemming from Jews dancing too much – seriously) had ended up with two sects at each others’ throats. On one side, you had the town prefect, Orestes, who was basically trying to keep the peace. On the other side, you had the bishop of the town church, Cyril, who was trying to look after his own. Cyril had recently undermined Orestes’ power by expelling all the Jews from the city (they’d killed a bunch of Christians, and maybe burnt down a church? it’s complicated). In any event, Orestes was all, “respect my authoritah,” Cyril was like, “whatever,” the two started butting heads, and thus: wilding out.

Evidently these guys could give up meat for six weeks, but not murder.

Hypatia got dragged into the middle of this when Orestes started seeking out her advice – because she was, as has been established, a capital-s Smart Lady. The mob under Cyril latched on a rumor that she was prolonging the conflict by giving Orestes bad advice, so they did what mobs do: went to her house (in some accounts, her classroom), stripped her naked, and killed her. The translation here is subject to debate, but the instrument of her death was either roof tiles or sharpened oyster shells. Many of the “oyster shell” camp interpret the story as the mob using it to flay off her skin (ugh), apparently to prevent her soul from reaching the afterlife. Afterwards, her remains were burnt and scattered around the city.

And this happened during Lent. Evidently these guys could give up meat for six weeks, but not murder.

After Hypatia’s death, her story gets seized upon almost immediately, with many warping her into whatever figure suited their agenda:

1) 500s: Byzantine historian Damascius – “She was the last Hellenic intellectual!”

This guy claimed that Alexandria fell into an anti-intellectual slump almost right after she died. In reality, the intellectual climate there continued for a number of years, although Hypatia’s life did mark its last peak. From his writings, I get the impression that Damascius was falling into the “back in the day everything was better, kids these days are terrible” fallacy. He also provides a really bizarre anecdote of Hypatia warding off a student who had a crush on her by waving her menstrual rag in front of him and saying, “I’m not so beautiful all the time.” He holds this up as a symbol of chaste virtue, which is… well, different.

John of Nikiu corroborates the main facts about Hypatia’s story, but adds in a lot of flavor text about her “Satanic wiles,” her devotion to “magic, astrolabes, and instruments of music,” and adds that she had “beguiled [Orestes] through her magic.” He characterized the mob lynching as the glorious eradication of the last remains of idolatry in the city.

In Gibbons’ telling, Cyril was jealous that everyone liked Hypatia, and, it’s implied, had a total crush on her and thus spread the rumor that incited a mob to kill her. Because that’s what you do when you like someone.

Kingsley wrote a novel about Hypatia’s life, in which he sexes her up, makes her a helpless heathen-to-be-saved, and uses her story to rail against the Catholic church. The book carries the distinction of being described by The Oxford Companion to English Literature as “ferociously racist.”

Here’s where the modern resurgence of Hypatia’s fame largely stems from. What Sagan says about Hypatia in Cosmos (both book and TV series) is factually accurate, if a bit inflammatory. Where he gets a little outside the realm of straight fact is where he characterizes the conflict as one of pagan intellectualism versus Christian mob mentality. It overlooks a couple things:

6) 2009: Amenabar: “One woman stands between civilization and chaos!”

There was a wildly exaggerated movie called Agora about her life, the trailer for which claims she, uh, tried to unite all of mankind. It didn’t do very well. But hey. Rachel Weisz!

Basically, what you should take away from it is this: she was a victim of politics by being the wrong person, at the wrong place, at the wrong time. It is entirely probable that she might not have been killed were she not an intellectual, or not a pagan, or not a woman — but that’s all speculation and we may never know for sure.

What’s sad is that, likely because of the vilification prior to her death, none of her works survive to present day. While many of her students went on to make important contributions to mathematics and other scientific fields, we’ll never know what she herself contributed. Based off of the available evidence, we can infer that she was helping to discover and hammer out the sort of math that one learns about toward the end of high school nowadays — which may flip her from hero to villain in your mind, depending on how you did in linear algebra.

In case you missed it, there’s going to be a Rejected Princesses book! I’m very excited. Maybe you will be too! Or maybe you won’t. Truly, we live in a world of infinite possibilities.

The hint for this week was murderously difficult due to some rat-bastard misdirection on my part. But a bunch of you got it anyway, you sneaky rapscallions! So, in no particular order, we got:

EMAIL: Anna Meyer, saradgaines, Kristin Impellizzeri, Victor Guerra, Alisa Cohen, and Clair (who, like Madonna, apparently only has one name)

Address Orestes’ restlessness, get wrested and arrested by the rest.

I used Socrates and Damascius’ write-ups on her story as the primary sources. And no, it wasn’t that Socrates, it was a different one.
Additionally, there’s a ton of scholarly write-ups about Hypatia that I found useful to decipher her legacy as a political football: find a couple here, here, and here.

Women in Science: 50 Fearless Pioneers Who Changed the World
Rachel Ignotofsky, illustrator and author of a book featuring fifty women scientists throughout history, had an interview with mental_floss.

The next entry is probably going to fling you into an area of history you didn’t know existed (I certainly didn’t). So here’s the hint: What comes before Gamma Israel and after Aksum’s king? 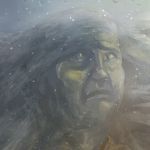