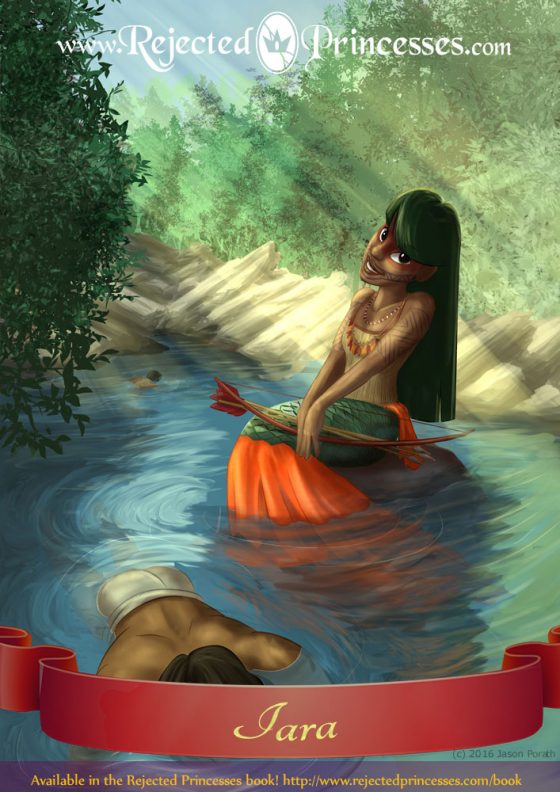 Maybe you’re familiar with mermaids as lovesick sea dwellers who just can’t get enough of hunky air-breathers. Maybe you have even read the unsanitized versions of said stories that, say, feature the besotted protagonist essentially stabbing herself repeatedly so the handsome prince will like her. (spoiler: does not work, do not emulate)

Well, the story of the Brazilian mermaid Iara is nothing like that.

Iara was the pride of her Amazon-dwelling tribe. The daughter of the group’s spiritual leader, Iara grew to be the best warrior of them all — courageous, kind, strong, and (as I’m finding every single story ever written about women feels inclined to mention) beautiful. In short: she was hot shit, and everyone liked her.

Her brothers knew they couldn’t take her, even two-on-one.

Everyone, that is, save her two brothers, whom she overshadowed by virtue of being far more awesome. Upset by this, they decided to solve their problem with mankind’s traditional go-to solution: murder. The only catch was, they knew they couldn’t take her, even two-on-one. So they waited until she was asleep, reasoning that two alert soldiers would be stronger than one unconscious one.

They were incorrect. As soon as they got near her, she jolted awake and killed them both in self defense. Hell, she might have still been half-asleep.

Afterwards, her father, unaware that his sons had tried to kill her first, and apparently deaf to her cries of “they started it,” led the rest of the tribe on a hunt for her. Although she eluded them for quite some time, eventually they caught up to her and tossed her into a nearby river, where she drowned. Bummer.

But even underwater (and dead), she was still making friends! The fish there thought she was pretty cool, so they transformed her into a half-fish, half-human person — the first of an entire branch of river-dwelling mermaids called Iara. When men chanced upon Iara, usually in the afternoon, they would be so overcome by her beauty (or singing voice) that even if they somehow managed to escape, they would literally go insane. What happens if they didn’t escape changes from telling to telling. In some versions, the Iara would drown, and even eat them. In others, they would join her little aquatic harem, and she’d treat them pretty well! Life could suck more.

The legends are unclear about what happens if a woman chances upon Iara. Presumably, a curt head nod.

The myth of Iara is, in all likelihood, an intermingling of European myth, local monster stories, and river goddess worship. The European myths are probably obvious to most everyone reading this. The monster in this case can be tracked back to the Ipupiara, a crazy-looking fifteen-foot-tall sea monster that ostensibly terrorized 1500s Brazil. The river god worship is a bit harder to track down, but as far away as Venezuela, you’ll find the story of Iara conflated with that of Maria Lionza, a tapir-riding, vulva-wielding beast queen.

(I’d like to think I’m the first person to ever write “tapir-riding, vulva-wielding beast queen,” but I’m probably not)

First off: many thanks go to @justafakeme for the suggestion. Due to language barriers, finding source material for South American entries has been difficult — most of the good ones I’ve found, I’ve had to save for the book. But I wanted to put something out there! Been too long already.

As for the guessers:

This South American Lady of the Lake kept the sword for herself.

Unfortunately, I forgot to write down citations when I first wrote up this entry, and I have since forgotten which library book I’d used as a primary source. But here are the bookmarks I had for her entry:

Running the shogunate from a convent. 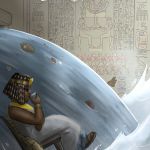