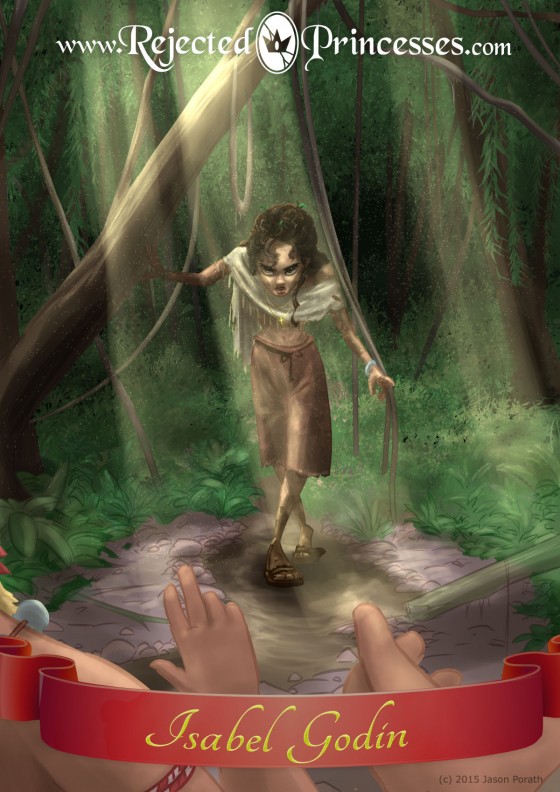 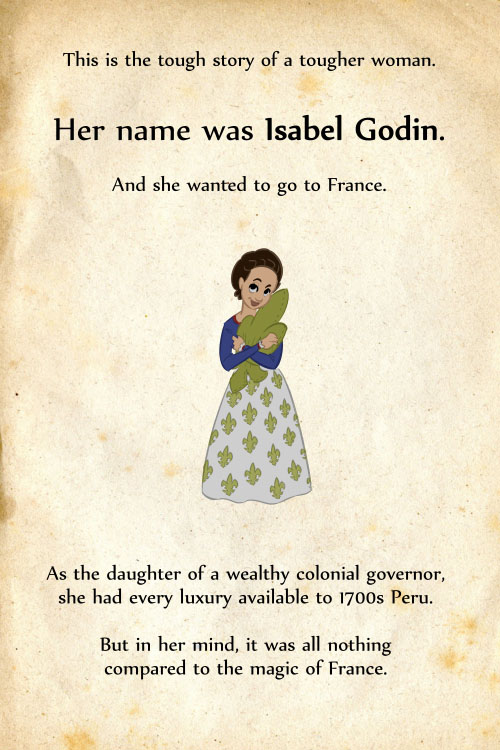 1 To be precise, she was located in Ecuador – which at the time was part of the Viceroyalty of Peru. She lived in Riobamba, for the most part. 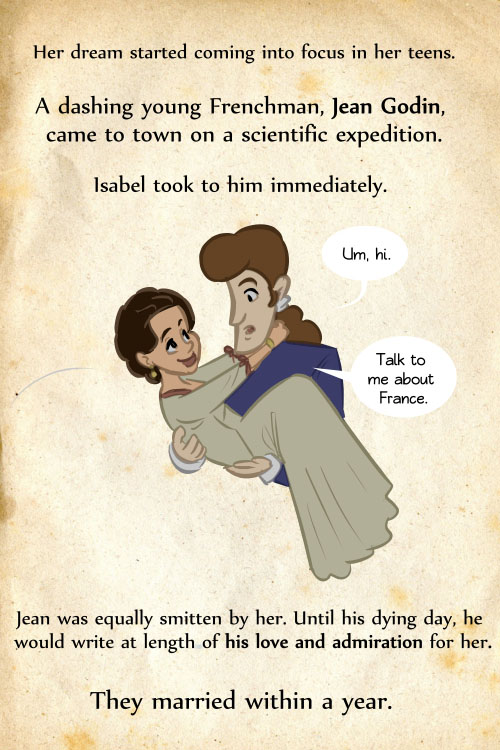 2 When they married, he was 28. She was 13. …it was a different time. There’s very little of Isabel’s writing that survives to modern day, but much of Jean’s does. He expresses regularly his admiration for her kindness and intelligence. When he died, he left everything he could to her under the law, without reservation – and remarked that his only regret was that he could not give her more. He truly cared for her, and from all that survives from the period, it seems she felt similarly for her. 3 The details of Godin’s expedition are actually super interesting, although tangential. There was a huge scientific debate raging over the earth’s shape, and the expedition was trying to answer it by making measurements near the equator. This resulted in them nearly dying a lot. To add insult to (often lethal) injury, they were beaten to the punch by others in France. When the first members returned to France, Voltaire wrote: “In dull, distant places, you suffered to prove what Newton knew without having to move.” (Voltaire could be a bit of a jerk.) 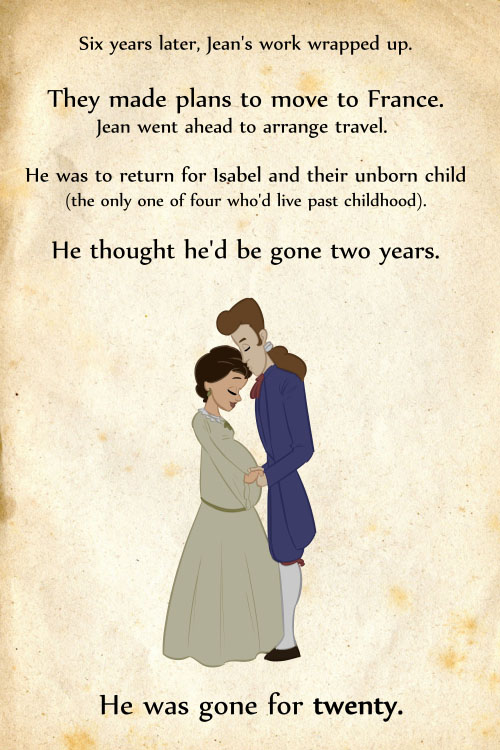 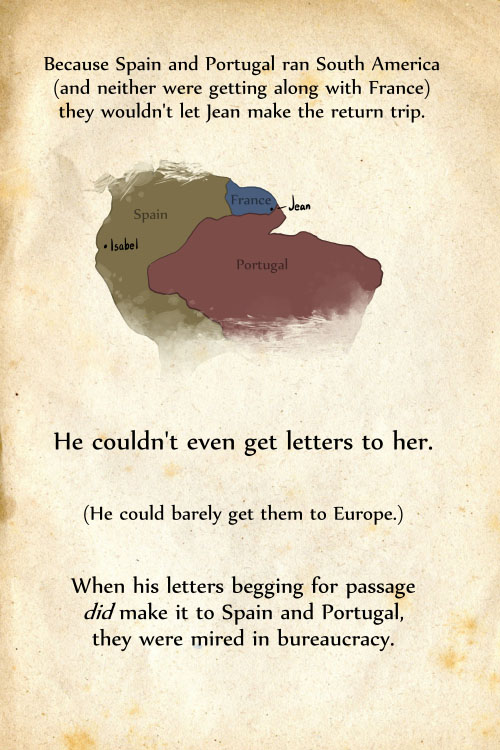 4 The mail routes in those days were insanely circuitous. The easiest way to get something to Isabel would have been for him to ship it to France, then get it on a Spanish ship sailing to Peru. He apparently tried that multiple times – but it often failed, and he didn’t know. On top of everything, there were new wars breaking out constantly in the area. Many of his letters were lost due to a seven-year-long war between France and Britain, which ended with France surrendering its North American territories to Britain. During this period, his letters were often destroyed along with the ships they sailed on. While it would be easy to paint Jean as a lazy spendthrift during this period (and certainly he wasn’t a business genius), he did try everything he could think of to reunite with Isabel. He actually became so desperate to get back to her that he tried starting a war between France and Portugal. Thankfully it didn’t go anywhere. It’s a credit to the man that he stayed. Many other Europeans in similar positions did not. 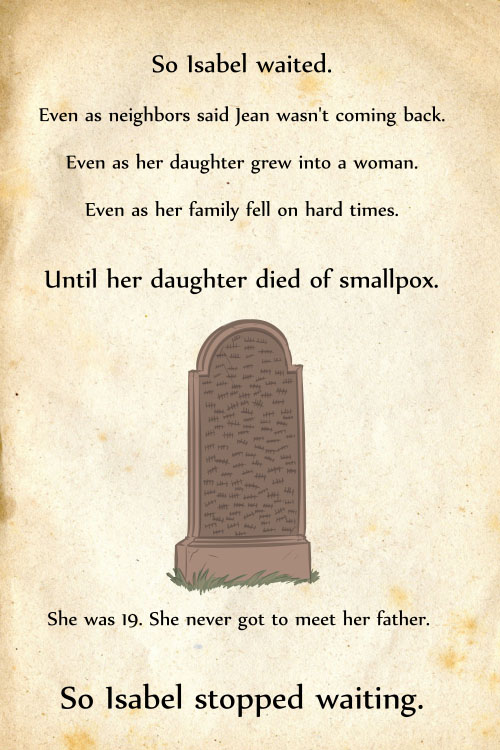 5 Around this time, Jean finally received his passport. He then managed to send word back to Isabel that a boat was waiting for her – although he didn’t go himself. He’d been secretly fomenting war with Portugal so long that he was convinced the boat captain — a Portuguese man — was going to kill him. 20 years in bureaucratic hell had done a number on Jean. 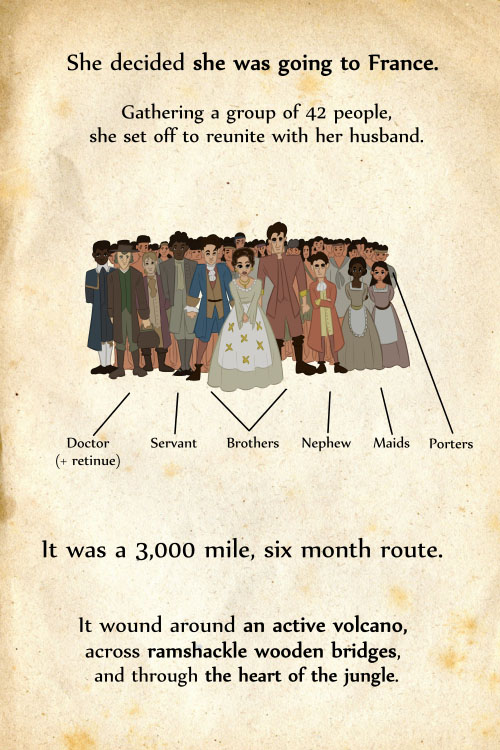 6 Now, this may sound utterly suicidal, but several people had done it before — including Jean — without incident. The group was so sure that they would be fine that at the start, Isabel was being carried around on a chair instead of walking. She packed trunks full of dresses, shoes, and fine china. The journey was supposed to go smoothly. Her brothers and nephew joined for a variety of reasons. Partly they wanted to look after her, but they had their own reasons for going to France. Her brother wanted the nephew to have a European education. The family had fallen on hard times after her mother’s death and they were hoping to make a new start. Moreover, there was general unrest stirring up around Quito and Riobamba. Being fairly visible upper-crust types with dwindling resources, they felt vulnerable, and thought it prudent to leave before the situation deteriorated. The doctor who joined them seemed to just want to get to the east coast. I don’t know much of his motivations. Her servant Joaquim seemingly went willingly, as he was going to be freed after they finished the journey (more on that later). The other servants, I can’t speak to – little record of them survives. 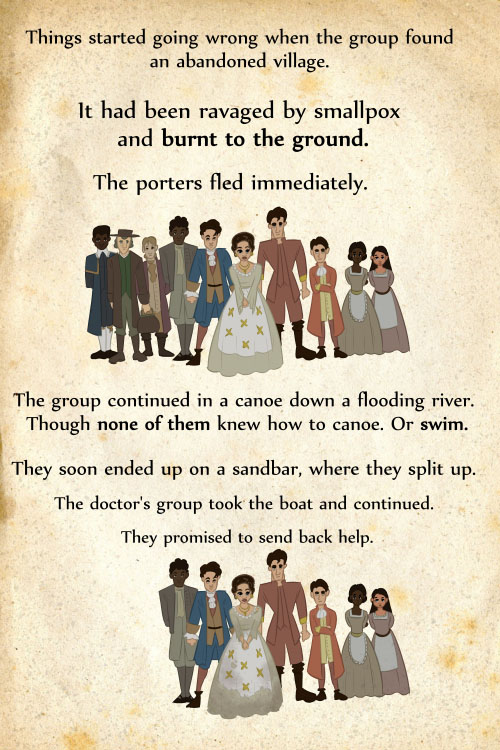 7 Their misfortunes were actually even greater than this. They eventually found some survivors from the smallpox-afflicted village, who crafted the canoe and took them down river a bit – and then abandoned the group in the middle of the night three days later. After that, they found a native man who was dying of smallpox, and took him on board to navigate the boat. When the doctor’s hat fell in the water, the man reached over to grab it — then fell overboard and drowned. After that, the boat capsized regularly, nearly drowning Isabel. By the time they hit the sandbar, the river was flooding — the water level could change by 10 feet in a day. Isabel and company were too spooked to get back on the boat. 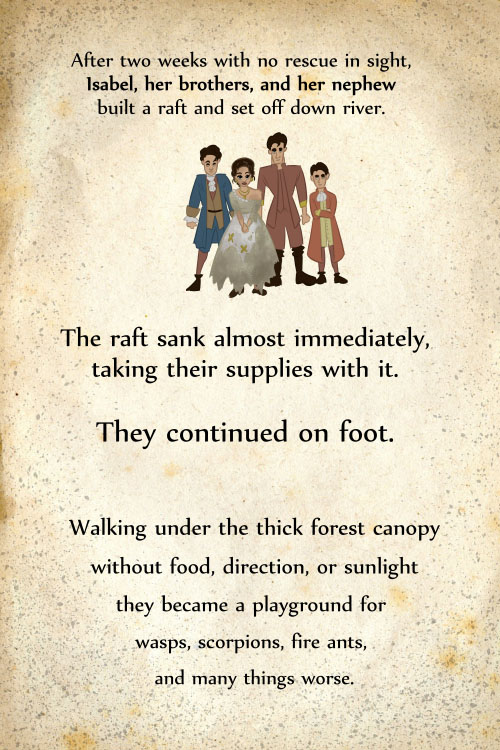 8 The group who’d gone ahead — the doctor, his companion, and Isabel’s servant Joaquim — did eventually return to the sandbar. However, they only found corpses. From this, the doctor assumed Isabel had died, and spread the word around town. He also sold her belongings that she’d sent with him. What exactly became of the three left behind at the sandbar is unknown. 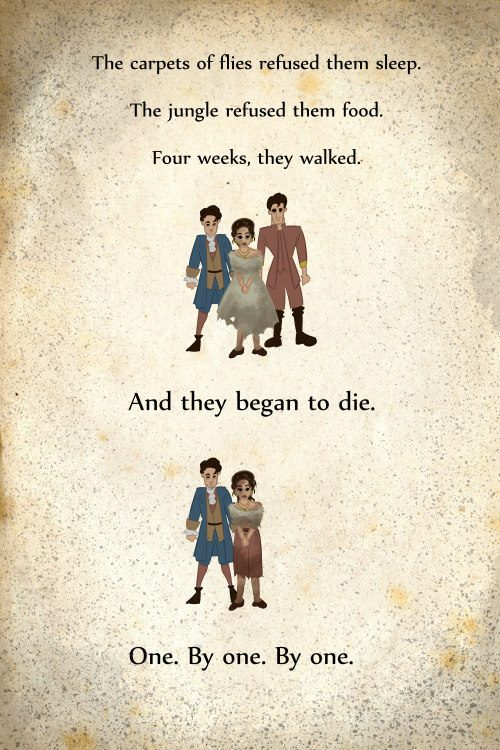 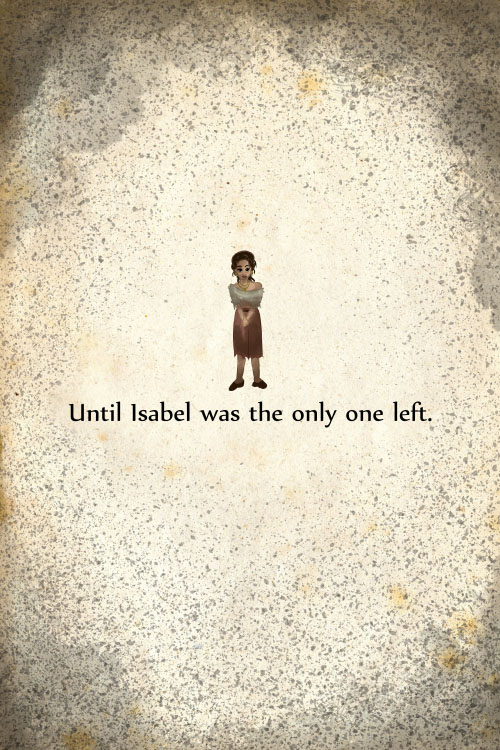 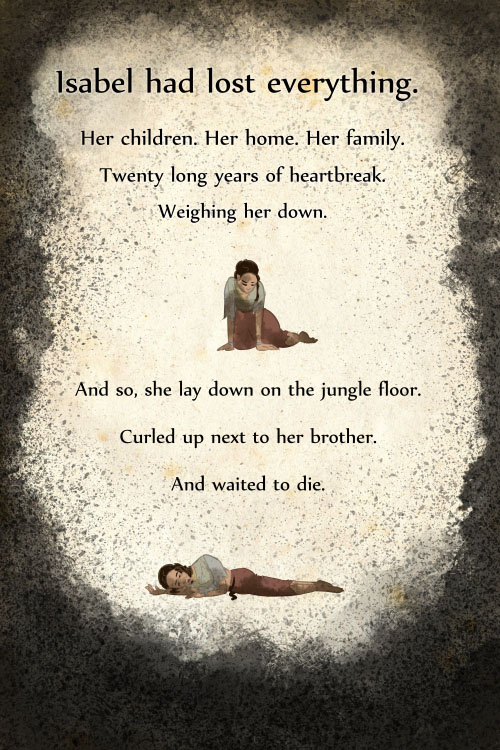 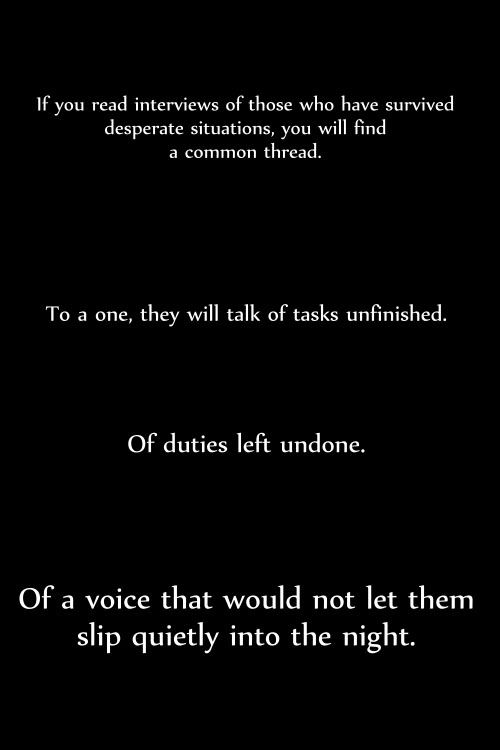 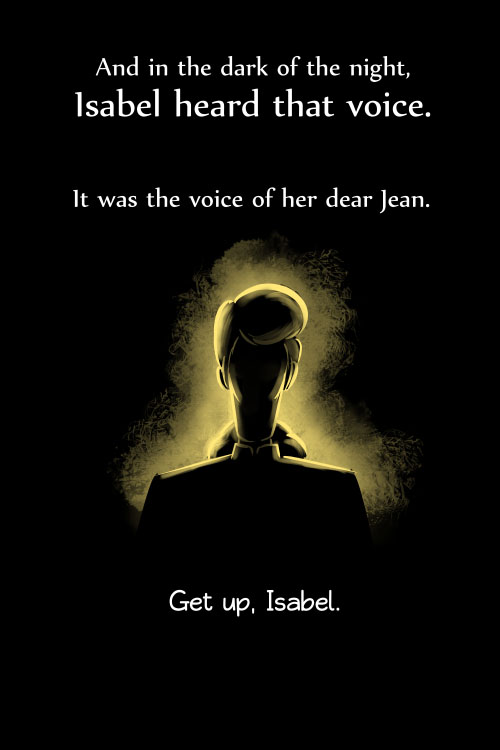 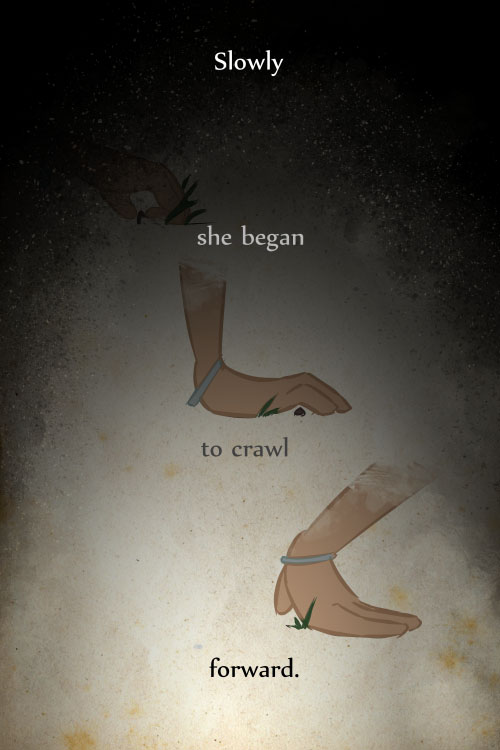 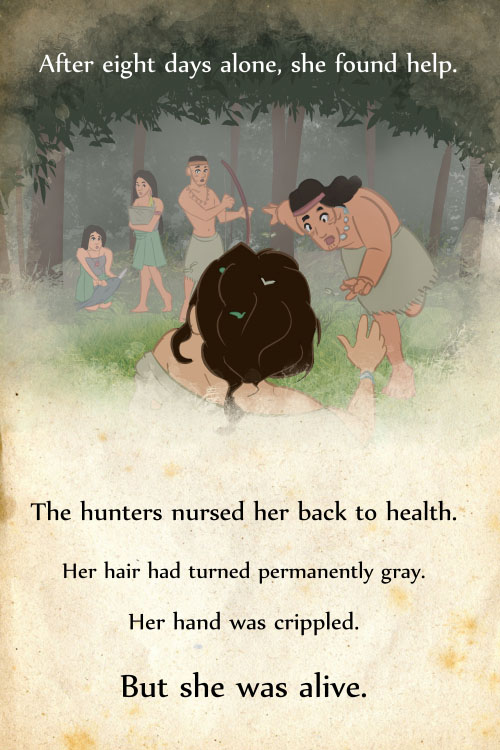 9 She had actually been in such rough shape that she initially thought they were going to kill her. She thought better of it, and revealed herself to them. She was in convalescence for around a month, during which time they had to rid her of a huge number of parasites, particularly botflies. To her saviors she bequeathed her two gold necklaces, some of the only adornment to survive her journey. This was an incredible act of generosity, enough to provide for them for possibly years to come. Unfortunately, the priests who were running the mission where she was staying promptly confiscated the gold necklaces and gave her saviors 3-4 yards of cotton instead. She, being a devout woman, felt she could not talk back to the clergy, even though they had just proved themselves colossal douchebags.10 About the only surviving piece of writing from Isabel herself concerns her enslaved servant Joaquim. Before she’d sent him off with the doctor, she’d promised to free him at the end of the journey. When Joaquim showed up in town without her, he was thrown in jail upon suspicion of having murdered her. When she resurfaced alive, she wrote a strongly-worded letter demanding his freedom. Her only piece of surviving writing is demanding the freedom of her formerly-enslaved servant. 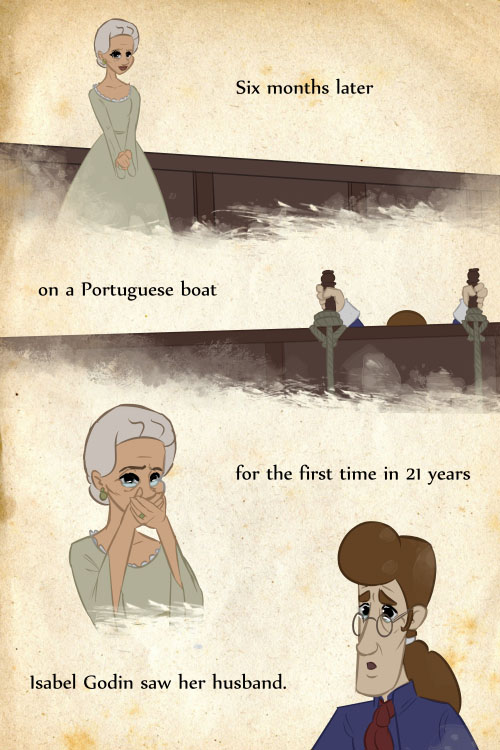 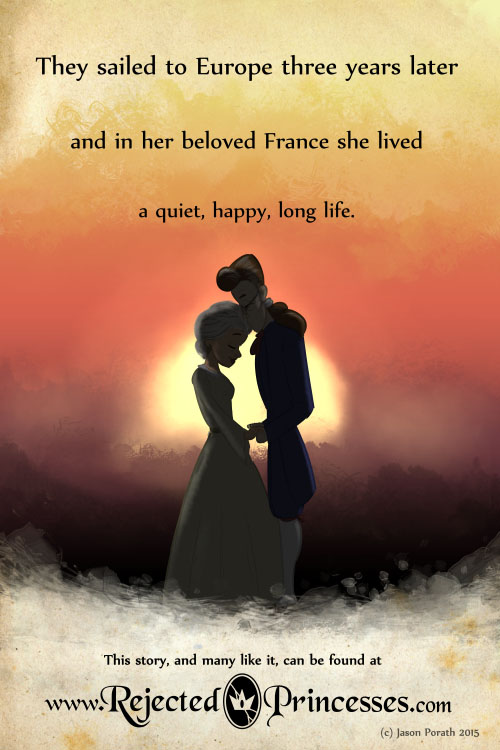 11 They lived in the French countryside, and had a relatively uneventful life. Jean was promoted up in the science world, and Isabel lived to the age of sixty-five. She seemingly had some pretty severe PTSD, and never talked of the experience much. Jean’s relatives would relate that in her later years, she would sometimes take out sandals and a cotton dress out from an ebony box and look at them.

Man, a bunch of you guessed twice this go around…!

To reunite with her husband, this intrepid Peruvian undertook one of the most harrowing journeys in history — and proved its only survivor.

Whitaker, Robert. The Mapmaker’s Wife: A True Tale of Love, Murder, and Survival in the Amazon.

Four bullet wounds heralded the end of this New Orleans woman’s marriage, and the beginning of her new life. 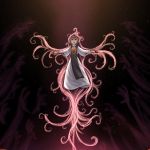 The Phoenix of Mexico 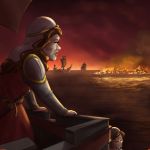 The Lioness of Brittany