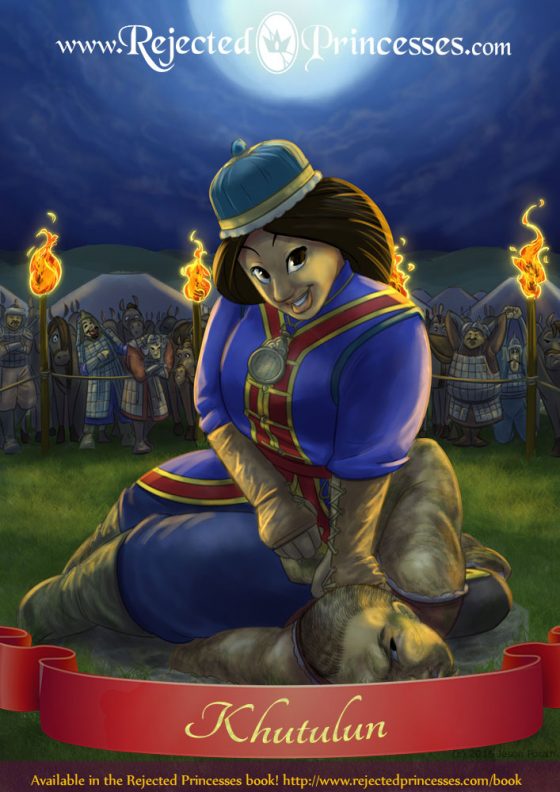 Staring at you from the opposite side of the page is none other than Khutulun, princess of 10,000 horses, the pride and glory of the Mongol Horde.

A bit of background on the Khans’ Mongol Empire – it was, for the time, as big a deal as deals got. At its height, it was the largest contiguous empire in human history, stretching from China to Europe and the Middle East. The whole thing was started by Genghis Khan (maybe you’ve heard of him), who unified a number of nomadic tribes under a single banner. While he did bring many advances to the regions he conquered (religious tolerance, increased trade, meritocracy — all good things), you probably know him more for his reputation for brutality. Certainly he was known for it back in the day, too.

And it was not undeserved. Here’s an example: buddy once conquered a nation called the Khwarezmid Empire. Right after taking control, he decided to erase it from existence, burning towns to the ground and killing everyone in its government. He went so far as to divert a river through the deposed emperor’s birthplace, wiping it off the map. This sort of thing was what he was known for, and it was those warlike traits that he passed down to his descendants.

Khutulun was his great-great-granddaughter.

She was Genghis Khan’s great-great-granddaughter.

By 1260, the year Khutulun was born, the Mongol Empire was starting to fray at the seams, and civil war was imminent. Basically, some of the Khans — Khutulun’s father Kaidu among them — favored the old ways of riding, shooting, and other trappings of the nomadic lifestyle, while Kublai Khan — Kaidu’s uncle — was more into politics, governing well, and other things that no doubt bored the average Mongol to tears. Eventually Kaidu and Kublai began outright warring against each other, in a conflict that would last thirty years. Throughout this, Kaidu relied on one person above all others when it came to military expertise, and, spoiler alert, it was not any of his 14 sons — it was Khutulun.

So, Khutulun: as you could imagine, growing up with 14 brothers in an old-school nomadic Mongolian household, she had no shortage of testosterone around her at any given time. She grew up to be incredibly skilled with riding horses and shooting bows — Marco Polo, history’s greatest tourist, described her thusly:

“Sometimes she would quit her father’s side, and make a dash at the host of the enemy, and seize some man thereout, as deftly as a hawk pounces on a bird, and carry him to her father; and this she did many a time.”

I mean, picture that. You’re up against a horde of Mongolian warriors riding into battle. You’re tracking the movements of this huge chunk of stolid soldiers, trying to read which way they’re going. Suddenly, one of them — a woman, no less — darts out from the group, picks off a random person in your group, and runs back, before you even know what’s happened. That’s intimidating as fuck.

But all of this paled in comparison next to her skill with wrestling.

The Mongols of Kaidu Khan’s clan valued physical ability above all things. They bet on matches constantly, and if you won, people thought you were literally gifted by the gods. Now, these weren’t your modern day matches, separated out by things like weight class and gender — anyone could and did wrestle anyone else, and they’d keep going until one of them hit the floor. This was the environment in which Khutulun competed. Against men. Of all shapes and sizes.

Now, okay, back up. How can we be sure of that? Well, according to Marco Polo (and this is corroborated by other historians of the time, including Rashid al-Din), papa Kaidu desperately wanted to see his daughter Khutulun married, but she refused to do so unless her potential suitor was able to beat her in wrestling. So she set up a standing offer, available to all comers: beat her and she’d marry you. Lose, and you give her 100 horses.

Now, in these sorts of texts, 10,000 is like saying “a million.” It’s shorthand for “so many I can’t count them all” — you may also remember that Mai Bhago also fought 10,000 Mughals at Khidrana. While 10,000 may have been hyperbolic, suffice to say, it was a truly ludicrous amount of horses, supposedly rivaling the size of the emperor’s herds.

She remained this stubborn about marriage even as she got older and pressure mounted on her to marry. Marco Polo tells of a time where a cockier-than-average suitor challenged her. This dude was so confident that he bet 1,000 horses instead of the usual hundred. Apparently he was a decent fella, too, because Kaidu and his wife really dug him. Khutulun’s parents approached her privately and begged her to just throw the match. Just lose intentionally, they said, so you can marry this totally decent guy.

She walked away from that match 1,000 horses richer.

Unfortunately, due to her stubborn refusal to take a husband, people began to talk. Rumors began to spread around the empire that she was having an incestuous affair with her father (these sorts of slanderous rumors, you may begin to note, are a recurrent problem for historical Rejected Princesses). Realizing the problems her refusal to marry was causing for her family, she did finally apparently settle down with someone — although who, exactly, is subject to some debate. Whoever it was never beat her at wrestling, though.

Khutulun could be considered one of the last great nomadic warrior princesses.

Near the end of his life, Kaidu attempted to install Khutulun as the next Khan leader, only to meet stiff resistance from others — particularly Khutulun’s many brothers. Instead, a rival named Duwa was appointed to be Great Khan, and Khutulun’s story here begins to slide into obscurity. Five years after Kaidu’s  death, Khutulun died under unknown circumstances, at the age of forty-six. Afterwards, the Mongol Empire, particularly the more nomadic factions, began to crumble. Khutulun could be considered one of the last great nomadic warrior princesses.

After her death, she was forgotten for centuries. She only began her comeback to historical prominence starting in 1710 when a Frenchman named Francois Petis de La Croix, while putting together his biography of Genghis Khan, wrote a story based on Khutulun. This story was called Turandot (“Turkish Daughter”), but it was greatly changed from the facts of her life. In it, Turandot challenged her suitors with riddles instead of wrestling matches, and if they failed her challenge, they were killed.

Centuries later, in the early 1900s, the story of Turandot was turned into an Italian opera — except, getting even farther from Khutulun’s actual history, the opera became about a take-no-nonsense woman finally giving in to love. Ugh.

But while the West may have totally rewritten history with its recasting of Khutulun into Turandot, Mongolia continues to honor Khutulun’s actual story to this day. The traditional outfit worn by Mongolian wrestlers is conspicuously open-chest — the reason being to show that the wrestler is not a woman, in deference to the undefeated Khutulun.

A handful of people wrote in to suggest her, but the first was my brother, so credit goes to him. He wants to remain anonymous, and I have seven brothers in all (a lot, but nowhere near Khutulun levels), so hopefully that should be a decent smokescreen.

Toregene Khatun
Although her tribe was destroyed and she was forced into an unwanted marriage, this indomitable woman came to run the world's largest empire - with a woman as her companion.

Mongolia’s female archers
Naadam is an annual festival in Mongolia featuring competitions of the "three manly sports": wrestling, horse racing, and archery. Traditionally women would do all these things, but currently they can only compete in archery (and young girls in racing).

Nog Prize #2
In which I am corrected as to Mongolian wrestling!