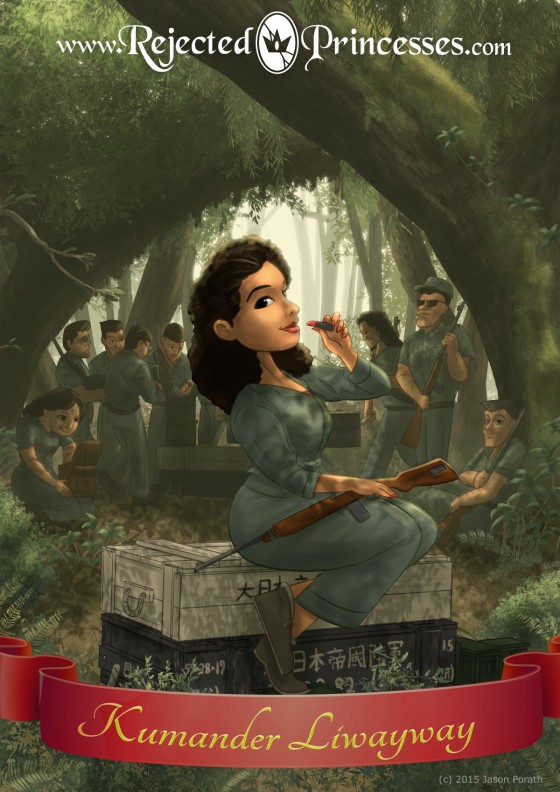 This week brings a very different kind of royalty to Rejected Princesses – for Remedios Gomez-Paraiso, aka Kumander Liwayway, aka “The Joan of Arc of the Philippines,” was a beauty queen. At least, until she became a military commander.

Alongside her repeated beauty queen accolades, Gomez-Paraiso could have easily been voted “least likely to start murdering foreign invaders.” She was your average high school student: the daughter of a provincial mayor, a hard-working teenager who made dresses and liked perfume.

However, when the Japanese invaded, her life story changed from John Hughes movie to Tarantino flick. Her father tried organizing a resistance, and so they tortured and executed him, publicly displaying his corpse in the town square.

When the Japanese invaded, her life story changed from John Hughes movie to Tarantino flick.

Soon afterwards, she left town to join a school for communist guerillas (jokingly referred to as Stalin University), taking the name Kumander Liwayway – “Commander Dawn”. Although she started service as a nurse, within months she was commanding an entire squadron. While mostly she was tasked with provisioning food and supplies (which often they did by stealing from Japanese troops), they saw no shortage of combat.

She was a terror on the battlefield. At the Battle of Kamansi, the rebel forces were so outnumbered that the ranking officer ordered a retreat. Liwayway refused to go, keeping her 100+ troops in place – and turned the tide. By the time reinforcements arrived, Liwayway’s squadron had nearly won the battle by themselves.

Moreover, she looked fabulous doing it! Before each battle, she would don lipstick, get her hair did, and manicure her nails. While one might see this as a, well, curious set of priorities, it served two purposes. On the one hand, her appearance inspired the troops, letting them know that she was calm and fearless. On the other hand, in her words, “I am fighting for the right to be myself.”

“I am fighting for the right to be myself.”

This was no mean feat. This conflict1 Generally termed the “Huk Rebellion,” it started with driving the Japanese out during WW2, but transitioned to civil strife afterwards. The post-WW2 government, with heavy US involvement, was almost as cruel to the lower classes as the Japanese occupation government. Thus, many of the guerillas who fought the Japanese, including Liwayway, soon thereafter turned their guns on their new government. It’s more complicated than that (isn’t everything), but that’s the gist. saw women integrated into Philippines military units for the first time, and it was not an easy transition. Although according to a high-ranking official’s estimate, upwards of 10% of the troops were women, many of the military leaders wrote them off as mere “forest wives.” These women could not get a break – while the very army they worked for was ambivalent about providing for them, the mainstream press vacillated wildly between labeling them unfit mothers and prostitutes, and celebrating their peculiar “Amazonian” status.

Liwayway herself took no such shit. When a comrade disrespected her with sexual innuendos, she challenged him to a duel2 I could not find any information on how the duel ended, if it took place at all. The story comes from her brother’s 2009 biography of her, which does not seem to exist in any library in America. The comrade’s name was Katapatan, that’s all I can say.. She was all business, inspiring the supreme leader of the guerillas to remark, “She did not talk of dresses, dancing, or perfumes; she talked of the work to be done, our organizational tasks, of the obstacles to be overcome.”

She was captured twice, both times due to betrayals by double agents. The first time, she was caught on the way to be treated for a bout of malaria so bad that she could not walk. Charged with rebellion, sedition, and insurrection, she proved herself a media darling by talking smack to the president’s face3 When the president, Manuel Roxas, accused the Huks of being terrorists, she replied: “No, Mr. President, you are wrong… we are only fighting for a decent livelihood and are only for the democratic treatment in our plight. Who are the Huks, Mr. President? Ninety-five percent are families of peasants, so I cannot see any reason why the Huks will terrorize their own families or why the parents will be afraid of their own children. We, the Huks, champion the rights of the peasants.”, and was released shortly thereafter. The second time was more dire: her husband4 She married Bani Paraiso, chairman of a political party. Their comrades had long wanted to set the two of them up, but they waited for 2 years into their courtship before marrying. They had one son. She never remarried. was killed, and she was thrown into solitary confinement. Although soon thereafter she was acquitted5 Smartly, she claimed she was just supporting her husband, and that “being a wife is not a crime.” While the claim was patently ridiculous, it was virtually her only option: her association as a rebel with the communist party was damning enough to warrant execution. By recasting herself as a dutiful wife and mother, she actually managed to secure her own freedom. Clever woman, Liwayway., she, being a newly-single mother, didn’t rejoin the warfare6 Decisions like this, of putting family over continued warfare, was one of the leading causes of the Huk Rebellion disintegrating. Combined with the facts that the government began clamping down harder than ever and morale was sinking faster than a lead scuba diver, it is little wonder that many soldiers decided to leave the guerillas..

Which isn’t to say she stopped fighting. From then on to the end of her life, she advocated hard for her comrades. As one of the few women on the Huks Veteran Organization, she personally helped people fill out paperwork and lobby for pensions for over twenty years. Despite never having graduated high school. 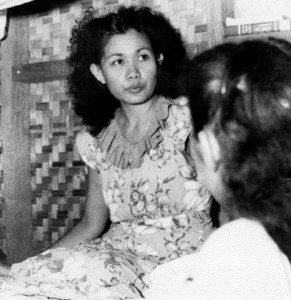 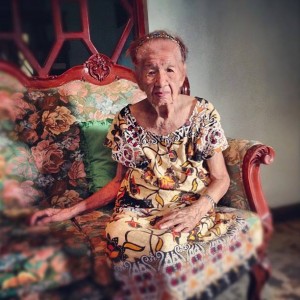 So, first off: this entry is the first to break a big rule of mine, as Liwayway was alive in the past fifty years. No way around it other than to say I goofed. When I chose her for an entry, I thought she had died in the 40s. It was not until I got deeper into the research that I found out she died in 2014. It is my deep and heartfelt hope that this entry represents her well, and that it is not disrespectful to any of her living family.

On to the art notes:

Most people did not see the hint this go-around, and on top of that, I inadvertently broke one of my own rules in the entry. Still, one of you got it: Ladyzfactor! Well done, you.

When fighting off invaders from her island home, this commander of the dawn made sure to look her best.

Badass female protestor in Macedonia uses riot shield to apply lipstick
A photographer for Reuters covering protests in Macedonia captured a moment to make you smile.
Backstory on the Huk Rebellion
A reader asks for more information about the war in which Kumander Liwayway fought - so they got it!

When flying cannibal ghosts proved unstoppable, their captives cried out, “is there no man to save us from these monsters?”