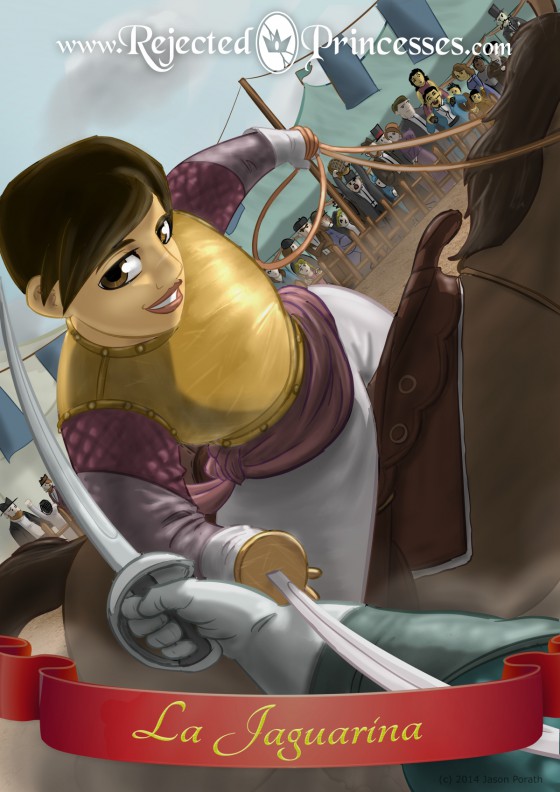 In April 1896, hardened military veteran US Sergeant Charles Walsh, in front of a crowd of 4,000 onlookers, turned tail and ran. Mere minutes earlier, during a round of equestrian fencing, he’d been hit so hard he’d been nearly knocked off his horse – so hard that his opponent’s sword was permanently bent backwards in a U shape. In response, Walsh did the honorable thing: jumped from his horse, claimed that the judge was cheating, and fled the scene, to the jeers of the massive crowd.

His opponent? A woman known as La Jaguarina, Queen of the Sword – an undefeated sword master who later retired only because she ran out of people to fight. Had she born 25 years later, according to the US Fencing Fall of Fame, she might be recognized as “the world’s first great woman fencer.” This week we tell the tale of this largely-forgotten heroine.

In the days before television or radio, mass entertainment involved actually leaving your house to go see something cool. Few attractions got more people out of their houses and on their feet than La Jaguarina. Debuting in 1884, she began her career in earnest in true ladylike fashion: by publicly calling the #1 broadsword master in the United States a wimp and challenging him to a duel. In a response that was a harbinger of things to come, he said he didn’t want to lower himself to fight a woman, that he was very busy with things that you totally couldn’t understand anyway, and then promptly left town. Permanently.

As a half-Spanish woman, it was her (terrifying) cultural heritage to be proficient in a wide variety of bladed weaponry.

La Jaguarina had been inspiring such reactions since she was a child. As a half-Spanish woman, she cheerfully informed interviewers it was her (terrifying) cultural heritage to be proficient in a wide variety of bladed weaponry. Although she was an unrivaled master of foil, epee, saber, and knife fighting, it was the short-lived sport of equestrian fencing where she truly excelled. At the time, the US was caught up in the stories of old-school jousting, and some thought to reinvent it for the modern era by combining two great tastes that go great together: one-handed horseback riding and live bladed weaponry.

If that sounds somewhat dangerous: yes, yes it was. In one fight, her horse went mad with fright, ran wildly around the field, and repeatedly flung her in the path of her opponent’s sharpened broadsword. Later in the same fight, the horse almost ran her headlong into a stand full of petrified society women. In another fight, her opponent, a man described by newspapers as a giant, hit her so hard it caved in her face mask and left a scar across her nose.

It should be noted: she won both those matches regardless.

Five years later, after La Jaguarina had beaten every swordsman she could find (multiple times, mounted and on foot), she ran out of opponents. She took out newspaper ads offering up to $5,000 (an amount north of $150,000 today) to anyone who could defeat her. In the end, nobody took her up on it.

From there, her story gets difficult to follow. She opened a finishing school, where she taught women to fence. She began acting, and performed as comedic foil in a number of plays. She sang. She modeled for a number of real-life re-enactments of famous paintings. She also married at one point, although it ended in divorce after several years.

But even in retirement, she was a firebrand. When a rather ardent young suitor (read: drunk catcalling buffoon) got in her face, she- well, the Washington DC Evening Star describes it so poetically:

“In telegraph time she had him by the collar and was shaking him with all the enthusiasm of a terrier over a newly captured rat. His hat went one way and his cane went the other, and his teeth played a castenet obligato to the solo of good advice that was rapidly breathed into his vibrating ears.”

When asked why she let the thief go, she replied she “didn’t want to be prosecuted for manslaughter.”

Afterwards, she let him go. When asked why, she replied she “didn’t want to be prosecuted for manslaughter.”

As with many entertainers, the truth of her personal story is murky. It was only in latter years, as she segued to an acting role, that the public learned her real name was Ella Hattan. Over her career, she relayed a huge number of conflicting backstories in interviews: that she’d learned knife fighting from her mother, from Roma people, from the military; that she grew up in Europe, in Mexico, anywhere but Ohio (where she was actually born). One scholar even believes that many of her fights were fixed – which, while not impossible, would involve a great number of co-conspirators, including promoters, fighters, referees, and judges. To say nothing of her opponents’ willingness to repeatedly lose face in public by getting their asses handed to them by a woman.

Perhaps the quintessential image of La Jaguarina comes from a post-retirement newspaper article that describes her fight with a bull. Time and time again, she recklessly teased the animal, while expertly dodging it and ignoring the pleas of her manager to use her sword and kill it. When, at the end, she gracefully bounded out of the ring, leaving the bull alive, both her manager and the newspaper reporter were bloodless with fright. As she dusted off and headed to her dressing room, the reporter asked her if she had been afraid. Laughing, she cheerily replied, “never was frightened in my life.” Many thanks to Ivan O’Neill, Gabriel Sinkin, and Mike Yurka for answering some fencing questions to help me get the illustration down.

Many of you guessed La Jaguarina! I need to make this harder, clearly. Just collecting these names for shout-outs takes me like 45 minutes…! Here’s the list (and I hope I didn’t miss any):

Had this “Queen of the Sword” been born ever so slightly later, her horseback antics might have made her famous to present day. 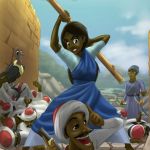 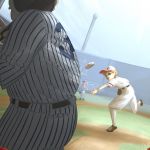 The Teen Who Struck Out Babe Ruth and Lou Gehrig