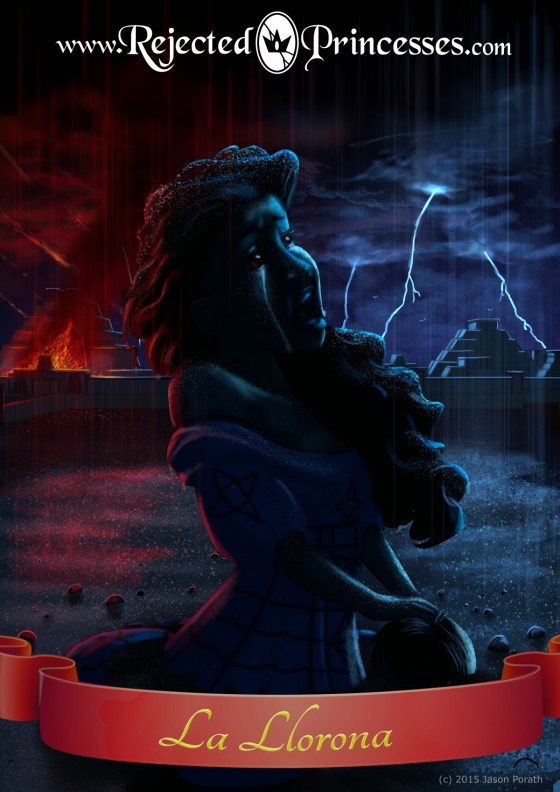 La Llorona’s story is one I refuse to take seriously on its face.

It goes like this: long ago, a beautiful Mexican1 There’s a hundred different variations of this legend all across Latin America – this entry mainly deals with the Mexican variant, as it’s pretty much the most influential. wife discovered, in the grand tradition of faithful women, that her husband had secretly been preparing his application to the Douchebag Club, chiefly listing as proof the fact he was cheating on her with a younger woman. Driven mad with grief at being abandoned and hellbent on revenging herself on her now-ex-husband, the wife drowned the children they’d had together. Once finished with the now-ex-children, she came to her senses, went yet madder with grief, and promptly drowned herself. The gatekeepers to the afterlife, unimpressed by her ignominious end, refused to seat her until her entire party was present — that is, until she found her children. To this day, she wanders the earth, weeping for her lost offspring. Her daily routine involves waiting til night, kidnapping wandering children, realizing they are not her kids (hey, it’s hard to see at night), and then drowning the hapless abducted youngsters.

So where does the tale originate? As a centuries-old legend echoed in many cultures, it’s a bit hard to pin down, but we do know where the first written example comes from: an ancient Aztec prophecy about the end of the world. Located in the Florentine Codex, one of the oldest Mesoamerican historical texts, the prophecy describes eight portents — one of which was a woman weeping for her children3 Which was evidently taken, at the time, to be a manifestation of Cihuacoatl, goddess of fertility.. True enough, shortly after Moctezuma II witnessed all eight portents, the end of the Aztec world arrived, in the shape of one of history’s greatest shitheels: the Spanish conquistador Hernan Cortes.

The end of the world arrived in the shape of one of history’s greatest shitheels: Hernan Cortes.

And here’s where we get a second wrinkle to the story. One of the people in Cortes’s retinue, the one who translated for him, and the one whose name the Aztecs used in place of Cortes’s, was a native woman: Malinche4 aka Malintzin, Malinalli, dona Marina, and, unflatteringly, Chingada — see footnote 6.. Royalty from a neighboring people to the Aztecs5 This is an assertion that’s a bit hard to prove, as the details on Malinche are frustratingly scarce. However, given that she was able to speak the same high language that Moctezuma II used, it’s reasonable to conclude she was royalty., Malinche was sold into slavery early in her life, and after being traded several times, ended up as Cortes’s interpreter — and mistress. Even though she was just surviving in a world that was doing its level best to kill her, Malinche was regarded as a vile traitor by many in later generations (her story became the basis for one of Mexico’s harshest swear words6 “Chingada,” which refers to a native woman who had children with a conquistador.). Some, however, tried to rehabilitate her image down the road, claiming that Malinche drowned the children she’d had with Cortes after the conquistador left her and went back to Spain — thus tying her to the La Llorona story.

(She didn’t actually kill their kids. What did happen is a story for another time: she’s covered in a full entry in the RP book.)

There are other precolonial folktales that feed into the legend, of women who died in childbirth, who died of drowning, who wandered the earth searching for their children. However, in post-colonial times, the stories shifted alongside cultural views of women — and the portrayals began going down the “bitches be crazy” road.

In the end, what’s at the core of the La Llorona story? A woman who weeps for her children, the ones left after the end of the Aztec world. Children who’ve lost their connection to their ancestry. And a story that changes and morphs into a simplistic “ladies, amirite?” boogeyman tale along with the culture. The “Gone Girl” of its time. 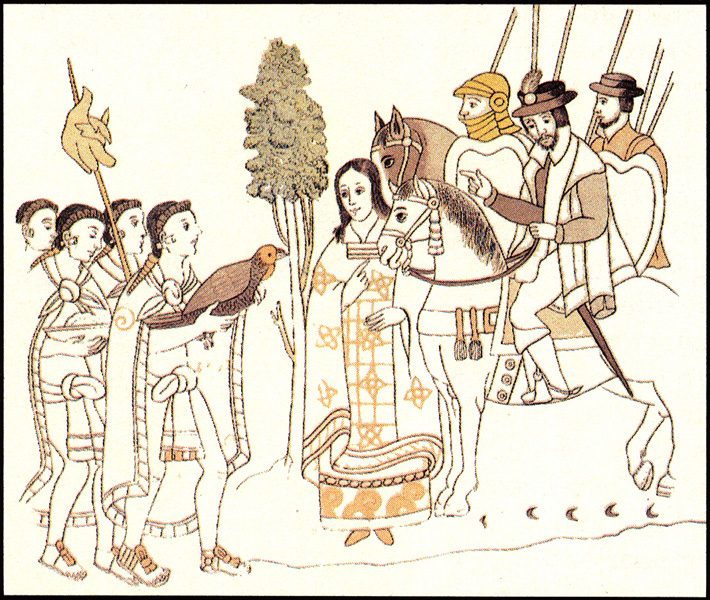 And the awards for “easiest hint ever” go to… ;)

A spooky Halloween folktale for you next week!

This lady of the lake cries for what she’s lost.

Next week I’m taking a break to have a creative recharge, see my parents, and mix up the format slightly for the next entry. I’ll be back in two weeks. Your hint is:

While the ghost of this woman may or may not have haunted Lady Stanhope, there’s no way she’s leaving ISIS alone, after what they’ve done. 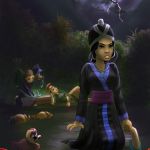