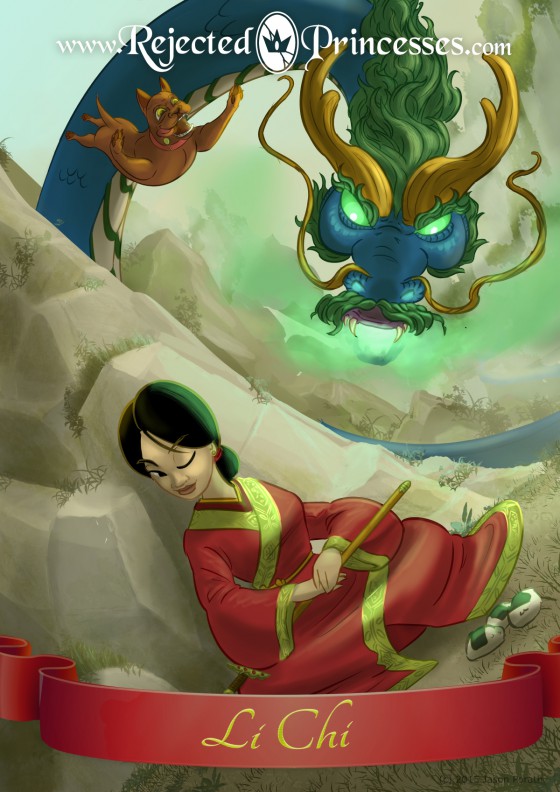 Li Chi’s story starts out in the same way as many myths. A monstrous beast — in this case a serpent — moves to the outskirts of town and starts wilding out. After killing a ton of magistrates, officers, and other bureaucratic middle-men (possibly to the cheers of the nearby townsfolk), the serpent issued forth its demands:

A 13-year-old girl, every year. To eat. Not terribly original, serpent, but this is a myth from around 5th century BCE, so I’ll let it slide. At least its method of issuing demands — entering peoples’ dreams and barking orders at them — was pretty rad. I suppose the standard “I’m naked in front of everyone” dream could only get more awkward if you had a 90-foot-long serpent bust in and start shrieking demands for teenage girls.

Anyways! Enter Li Chi, a young girl from a country family. After nine years of the kingdom offering up the daughters of slaves and thieves to the serpent (lame, guys!), the magistrates were having trouble finding a new sacrifice. It is at this point that Li Chi volunteered herself.

Now, in the story, Li Chi goes on at some length about how, since her parents had six daughters and no sons, that losing her would be no loss at all. “It is as if you were childless,” she says, “Since I’m no use to you alive, why shouldn’t I give up my life a little sooner?” It’d be easy to take this at face value, but the reading is quite probably meant to be sarcastic. She compares herself to another great heroine, Ti Ying, essentially saying, complete with eye rolls in place, “oh, I’m since I’m a girl, I must be so worthless, just like that totally worthless Ti Ying that everyone loves. I guess I’ll just go kill myself, guys.”

It should be reiterated that Li Chi was a teenager.

Except her sacrifice was anything but — for Li Chi, unlike your standard princess-in-peril, was not about to go out like a punk. She arrived at the serpent’s cave with a sword, a hunting dog, and a bunch of sugar-seasoned rice balls. She put them on the ground in front of the serpent’s cave and hid.

Sure enough, the serpent decided to get down on that tasty floor-rice (begging the question, why didn’t they just feed it rice instead of humans?), and Li Chi sprung her trap. The dog began biting furiously at the serpent, and while it was distracted, she jumped on its back and plunged her sword into its back. Bam, dead serpent.

Li Chi, ladies and gentlemen: passive-aggressive teenager with a sword.

Li Chi was not, however, exactly gracious in victory. Producing the skulls of the previous nine girls from the serpent’s cave, she openly mocked them, saying “For your timidity you were devoured. How pitiful!” Li Chi, ladies and gentlemen: passive-aggressive teenager with a sword.

After her return, she was promptly crowned queen for her achievement. Her family was showered with riches, and they all lived happily ever after. Just like the story of Cinderella, if Cinderella had saved Prince Charming from a dragon.

Heroes and Heroines: Critical Survey of Mythology and Folklore by Salem Press

You can also read the entire thing online here.

Li Chi’s historiography: totally wack.
How could Li Chi possibly compare herself to a Chinese heroine who was born a century after Li Chi herself? The answer gets complicated.

Switching up gears a bit, since we’ve had a lot of warrior women lately. Here’s your hint:

The only calling she heard was to record the stars. 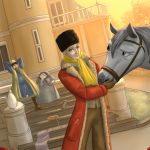 The Gender-Nonconforming Heroine Who Kept the Tsar Guessing