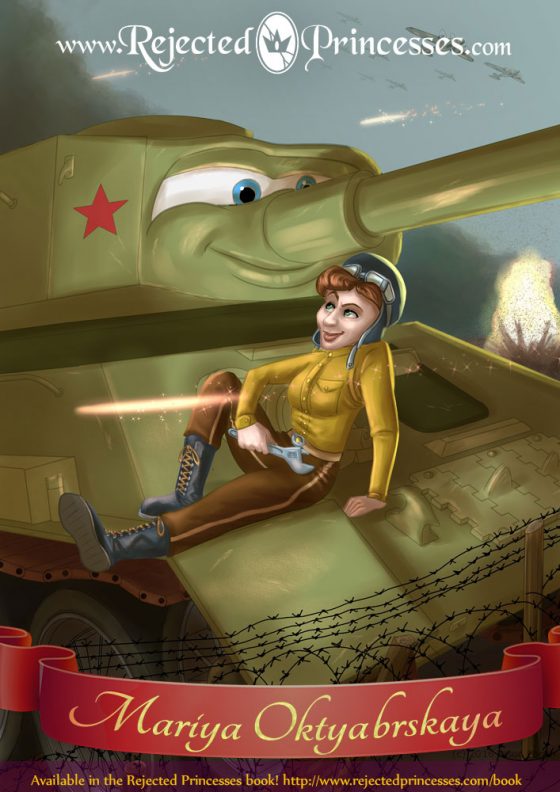 When the stars are all burned out and human beings are but fairy tales told by robots, somewhere there will be a list of the toughest women who ever lived. And near the top will be Sergeant Mariya Oktyabrskaya, the first women to win the Hero of the Soviet Union Award, and her tank, Fighting Girlfriend.

During World War II, her army officer husband Ilya was killed in action. In response, Mariya sold literally all of their belongings in order to buy a tank. She then wrote Stalin the following letter:

“My husband was killed in action defending the motherland. I want revenge on the fascist dogs for his death and for the death of Soviet people tortured by the fascist barbarians. For this purpose I’ve deposited all my personal savings – 50,000 rubles – to the National Bank in order to build a tank. I kindly ask to name the tank ‘Fighting Girlfriend’ and to send me to the frontline as a driver of said tank.”

“I kindly ask to name the tank ‘Fighting Girlfriend’ and to send me to the frontline as a driver of said tank.”

Initially, the army was skeptical of her ability to handle a tank. However, she quickly proved in training that she could drive, shoot, and throw grenades with the best of them — skills she’d picked up from her late husband, with whom she’d presumably had some interesting dates.

On her first outing in the tank, she outmaneuvered the German soldiers, killing around thirty of them and taking out an anti-tank gun. When they shelled her tank, immobilizing Fighting Girlfriend, she got out — in the middle of a firefight — and repaired the damn thing. She then got back in and proceeded to kill more Germans.

During all this, she wrote a letter to her sister describing her time in the war. She told her “I’ve had my baptism by fire. I beat the bastards. Sometimes I’m so angry I can’t even breathe.”

In the end, she was taken out by a mortar round when she got out of her tank in the middle of yet another firefight to fix Fighting Girlfriend. She was awarded the highest honor in the Soviet Military and is buried in one of the nation’s most sacred cemeteries.

Lyudmila Pavlichenko
When her beloved college of history was bombed by the Germans, this woman began a dark path that would see her become history's deadliest female sniper -- and one of Eleanor Roosevelt's best friends.

Alexandra Boiko
Along with her husband, Alexandra Boiko joined Mariya Oktyabrskaya in the "get permission from Stalin to buy her own tank and fight Nazis" club, which was apparently less exclusive than you'd think.

The Night Witches
This all-female civilian volunteer unit of the WW2 Soviet military overcame a lack of training, equipment, and faith to pull off one of the greatest underdog feats in human history and in so doing become Germany's worst nightmare.