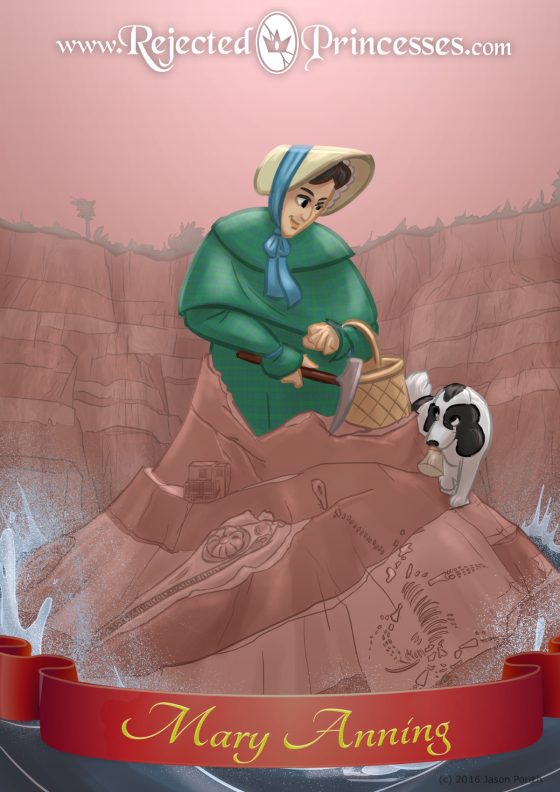 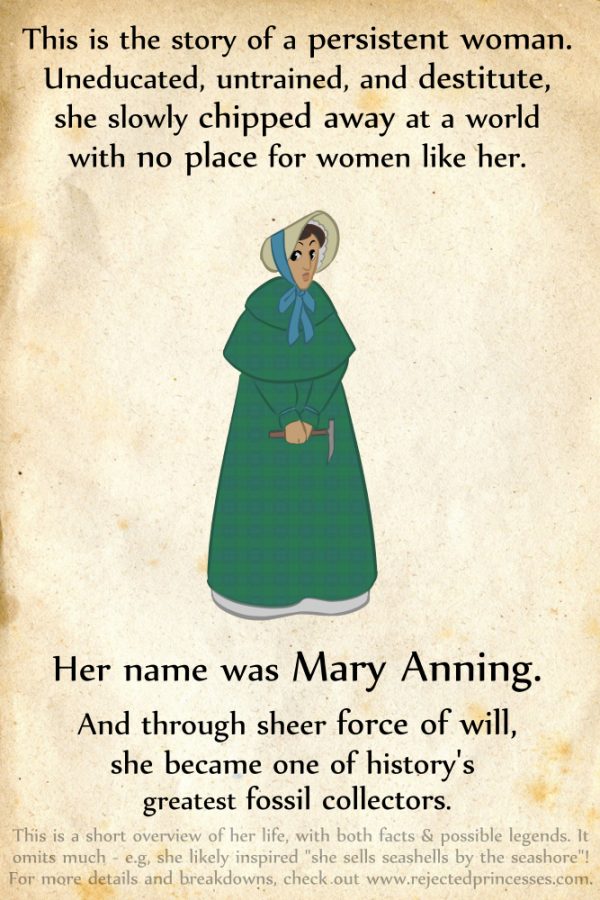 1 As the story itself gets at, she was a well-known character in early 1800s England, and as such, did a fair bit of self-mythologizing. 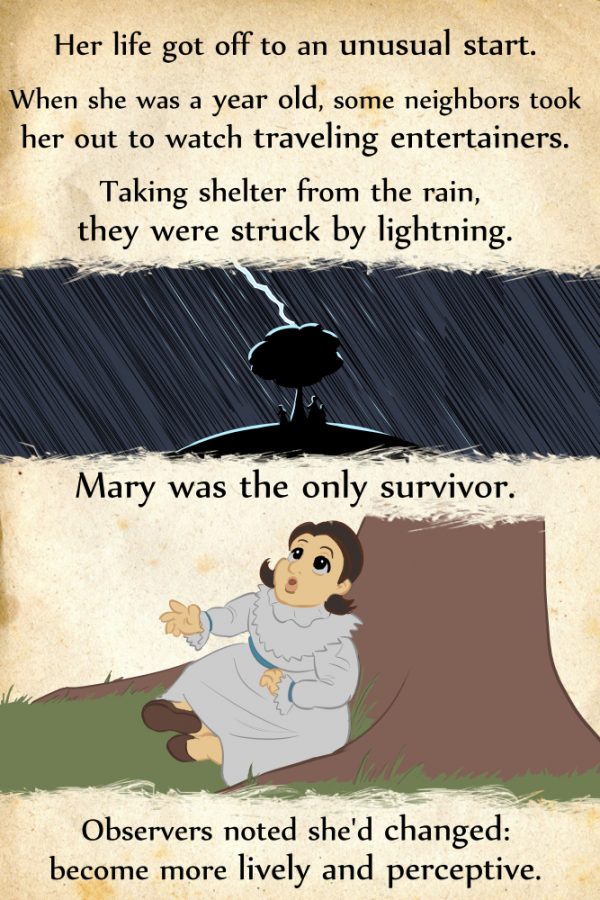 2 This is one of the more likely pieces of apocrypha. According to the telling, she was watching a troop of traveling horsemen putting on a performance in the Rack Field above her home in Lyme Regis, England. Four took shelter under an elm tree – one grown woman, two children, and Mary. After her electrocution, she was given a bath, and, according to a gazette edited (and possibly written) by Charles Dickens, “she who had been a very dull girl before, now grew up lively and intelligent.” 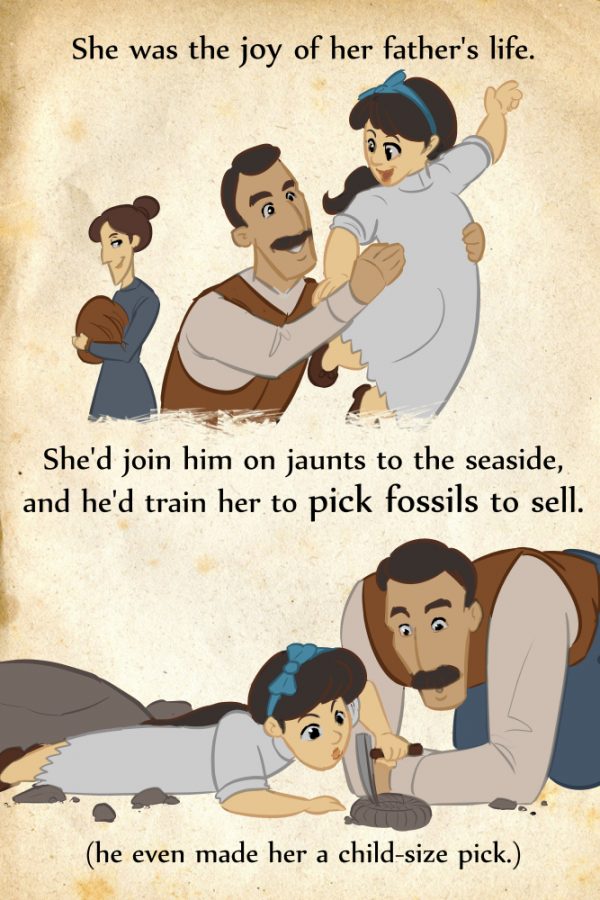 3 Her father was generally described as a bit of a childish goof who liked picking fossils more than doing his actual job (carpentry) or going to church. There’s not explicit mention of especial affection there, but I feel it’s reasonable artistic license to read a close bond into his dealings with Mary – he made her a pick, brought her along to play hooky… 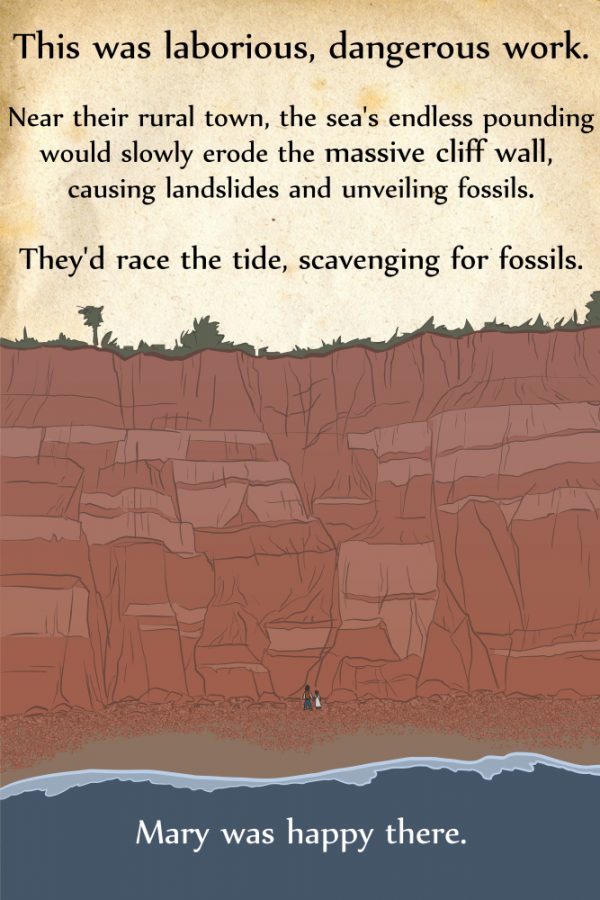 4 The sea was a terrible nuisance in Lyme Regis. According to the stories, more than once it would overflow and flood their house – on one occasion, they had to escape upstairs and ride it out in the attic. 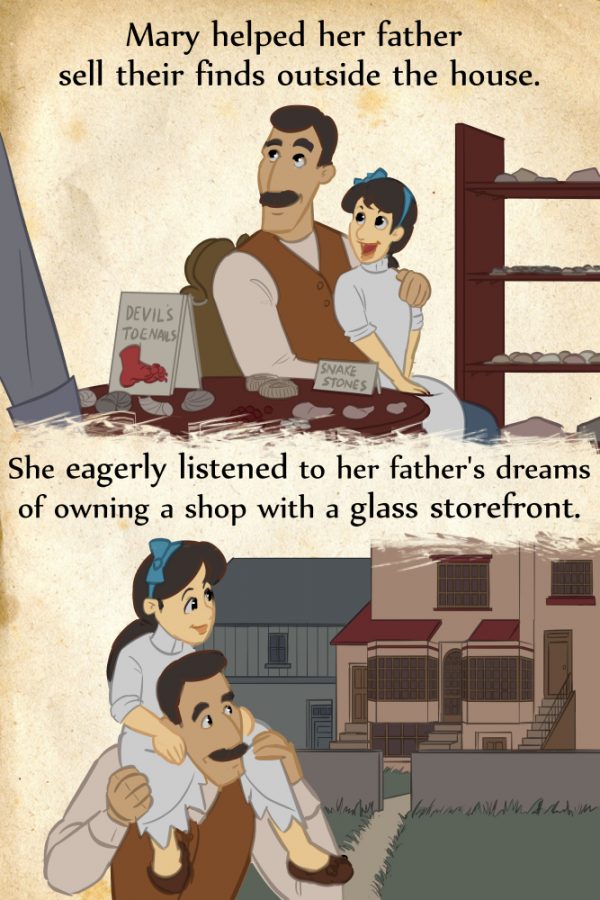 5 Paleontology was in its infancy and not well respected, so fossils were generally just sold as curios at this point in time. They had all sorts of fanciful names, like Devil’s Toenails, Snake Stones, Cupid Wings, and Ladies’ Fingers. 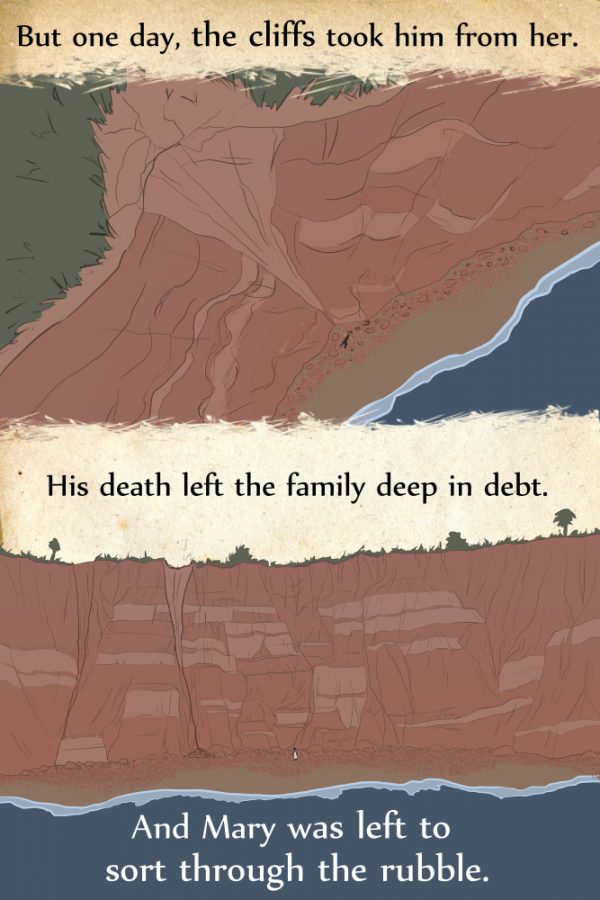 6 This is a bit of artistic shorthand. He did fall off a cliff – one a bit far afield of Lyme Regies, I believe – but he survived. However, sufficiently weakened by the fall, he later succumbed to consumption (tuberculosis).[6. He left them with 120 pounds of debt. This was a very serious amount of money. For reference’s sake, 25 pounds was enough to pay for everything for the three remaining Anning family members – Mary, her mother, and her brother – for six months. This was also the era of poorhouses, which were essentially debtor’s prisons. If you didn’t pay your debts, you could be imprisoned. Compounding matters were the fact that the Napoleonic Wars were ravaging the English economy.] 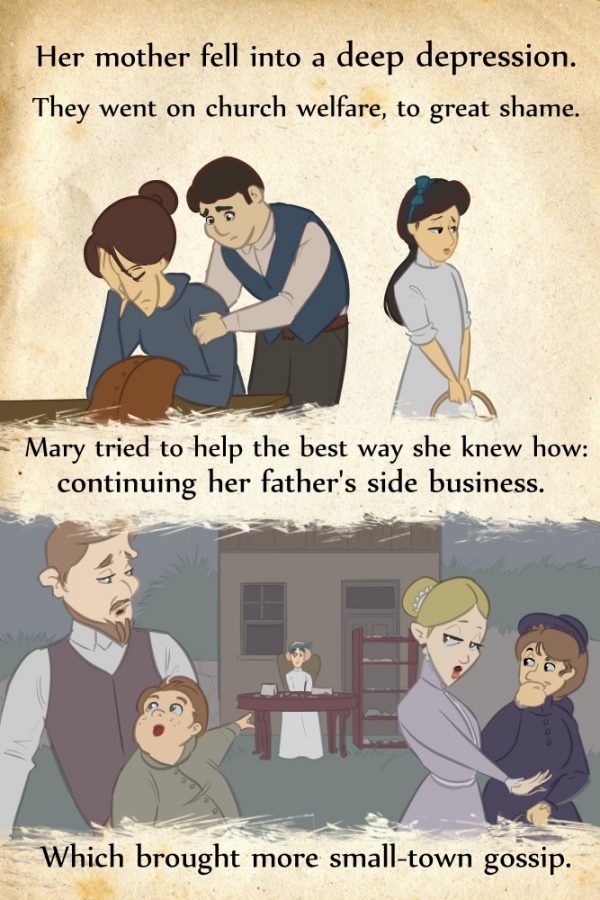 7 I don’t go into it much here, but she did have one brother, Joseph, who lived to adulthood, and around eight other siblings who didn’t make it. In a rather ghastly turn of events, Mary was actually named after her older sister, also Mary, who’d, at age four, died in a small house fire shortly before Mary was born. Joseph and Mary both worked at the fossil business, although Joseph apprenticed with an upholstery maker and didn’t spend a ton of time with it as he got older. Mary’s mother helped run the shop and sell the goods, although there’s no evidence that she helped hunt for fossils.[7. Part of the reason for the Annings’ status as social pariahs was that they were Dissenters – i.e. not part of the Church of England. Moreover, Mary’s father had been eyed suspiciously even within the Dissenters, due to his habit of skipping church to go pick fossils.][7. According to legend, the first time Mary went to the beach after her father’s death, a visiting noblewoman bought one of her fossils for a whole half-crown (which was a lot of money). This seems more apocryphal than the other details.] 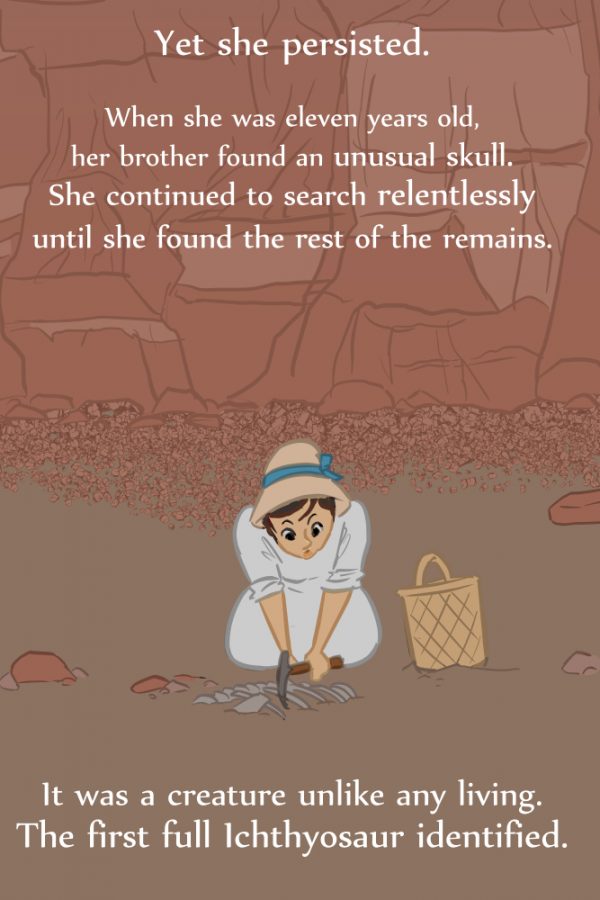 8 Timelines are confused as to when this happened, but most indicate that she found the remainder of the skeleton a year and a half after Joseph found the skull. They thought it was a weird crocodile at first. Other specimens had been found in Bath, Warwickshire, and Germany, but hers was the first complete specimen, and the one to receive the most attention. It took ten years to really settle what it was. It confused the hell out of the establishment – at various points, expets thought it was a bird, a fish, a crocodile, a lizard, and on. Accordingly, “ichthyosaurus” means “fish lizard.” 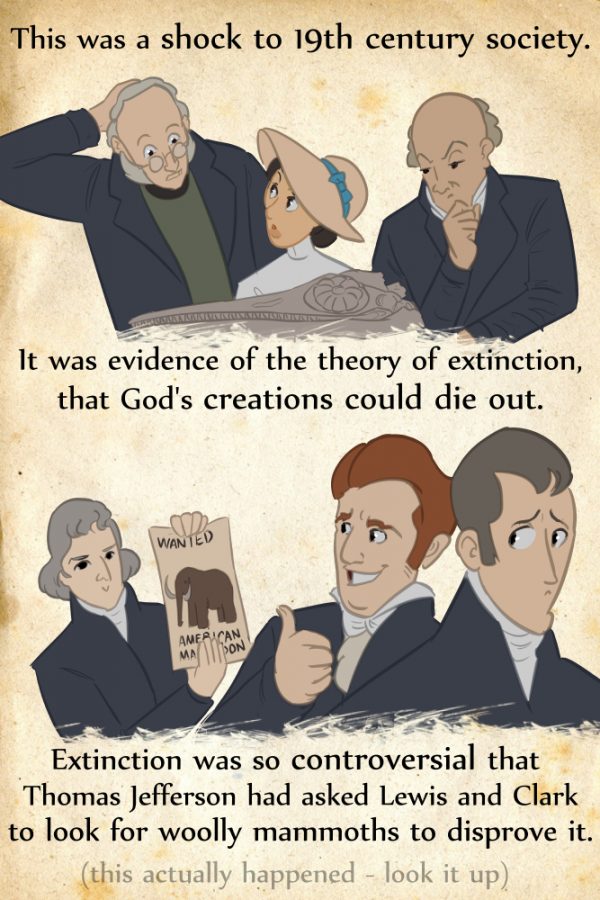 9 Jefferson had a thing for mammoths. Unsure what Lewis and Clark thought of being tasked with keeping an eye out for the things in their travels, but I love that drawing of them. 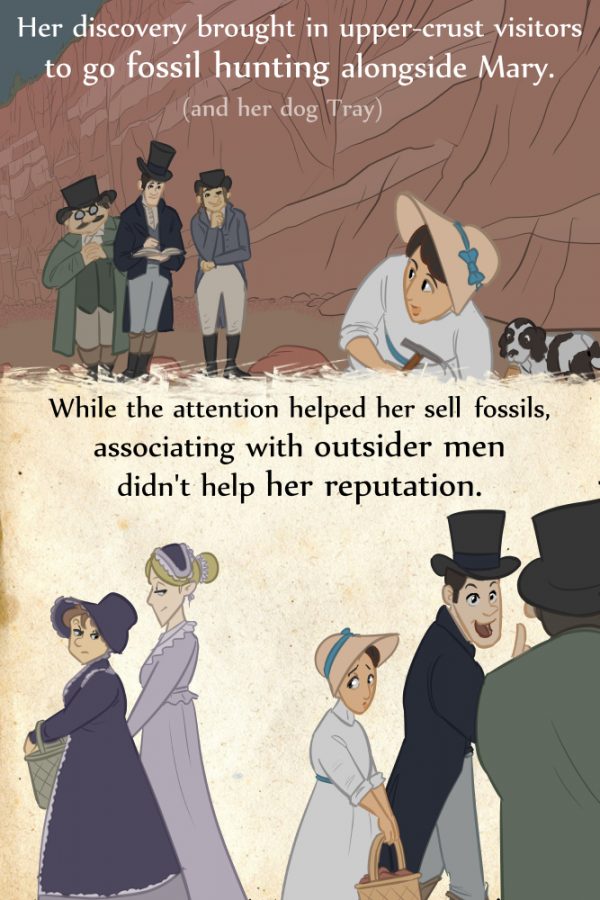 10 It’s unclear when Mary got Tray, but I introduce him here to give the audience more time with him. It’s unlikely she got him this young. She started having visitors as early as age 12, and Tray died when she was 34.[10. She had contact with a number of fellow fossil enthusiasts – notably among them William Buckland of Oxford (a quirky intellectual), Henry de la Beche (an independently wealthy young man on whom some historians think she had a crush), Thomas Birch (a lieutenant colonel who helped the Annings raise a tremendous sum of money from an auction of the fossils they’d sold to him), and Elizabeth Philpot (a fellow local hunter, with whom she became close friends). As many of these men were bachelors, her small-town neighbors would gossip about her.] 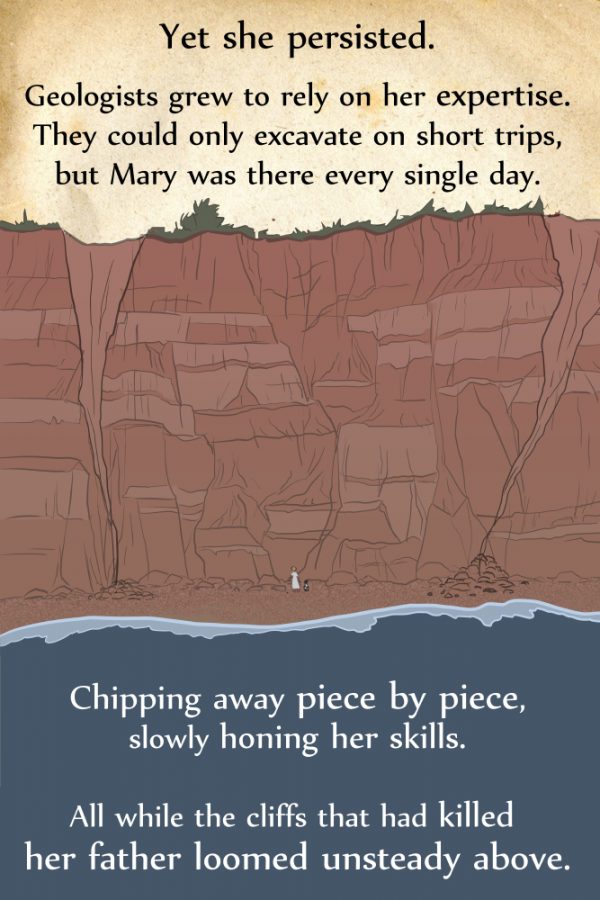 11 I don’t go into her methods, but she was far from just a hunter-gatherer. Upon finding a fossil, she would carefully excavate it. If they were small enough, she’d bring them back a piece or two at a time, and chip away at them on the kitchen table. If they were large, she’d hire people to help. From there, she would fix the bones on a frame and carefully draw it, then have the drawings engraved. She was respected for much more than just her ability to detect fossils – which was, in itself, uncanny. She could do the processing work afterwards as well as almost anyone, but she lacked the academic background for much further analysis.[11. To be fair, she did educated herself as much as she could on the subject. She carefully read all the subject matter available, copying out illustrations with shocking accuracy. She would dissect  squid and cuttlefish on the dinner table. She was way into learning.] 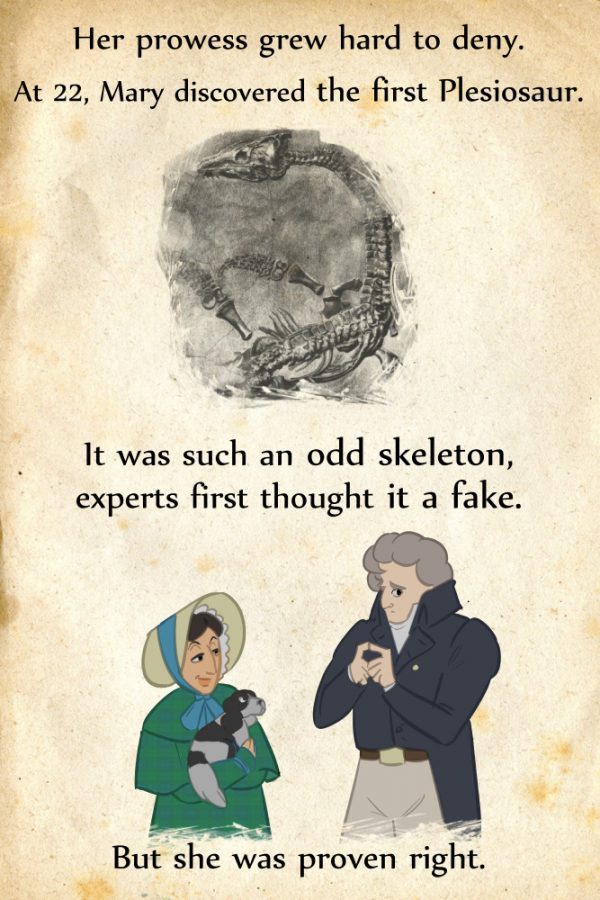 12 The guy doubting her here is Georges Cuvier, who proved the idea of extinction. He later withdrew his initial suspicions as overly hasty.[12. Other plesiosaurs had been found before, but they weren’t well understood, and were sometimes misclassified as Ichthyosauruses. Mary’s find was the first full skeleton.] 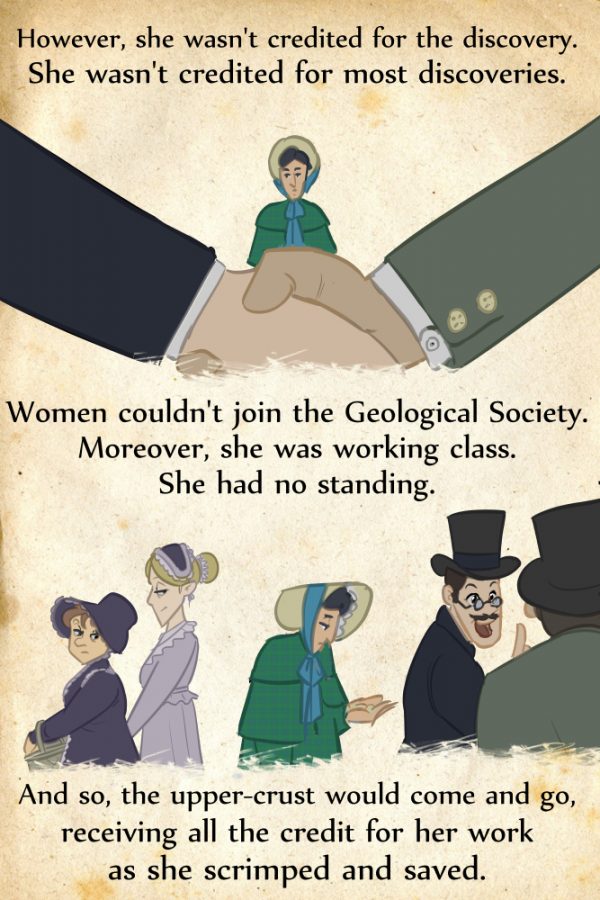 13 The aforementioned allies to Mary – Buckland, Birch, de la Berche – were generally very supportive, but even they didn’t always credit her. Museums only kept records of who donated it – generally someone to whom Mary had sold her find. As such, it’s hard to even know nowadays which specimens were found by Mary. 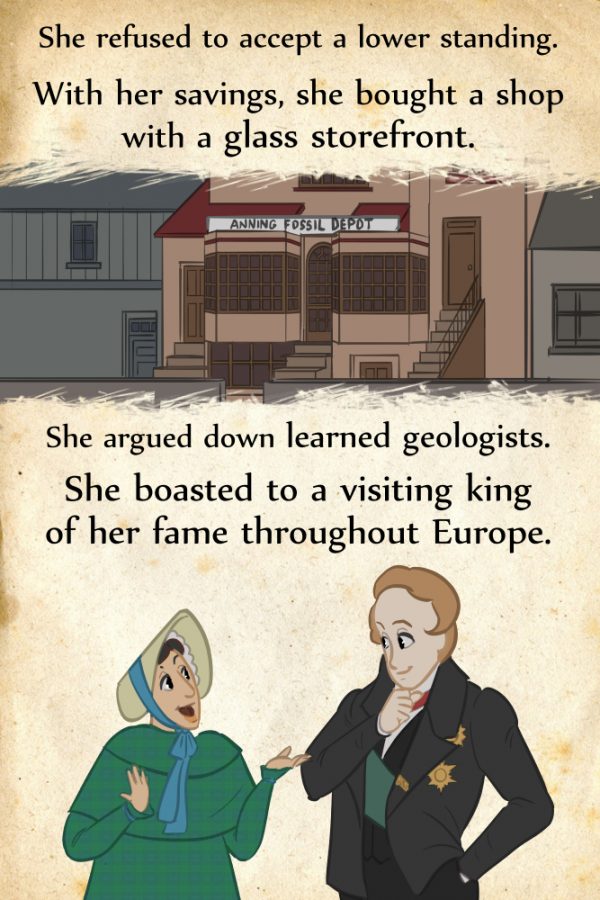 14 Here I reference her arguing with the previously-mentioned Buckland, “whose anatomical science she holds in great contempt,” and one of her only pieces of surviving writing, where she wrote to the Museum of Natural History with a correction. These happened at different times (Buckland in 1824, magazine letter around 1839).[14. The king in question was Freidrich August II of Saxony. While it doesn’t seem she met with him one-on-one, she did meet with his physician, to whom she gave an autograph, saying “my name is known throughout Europe” – which was technically true. This took place in 1844, near the end of her life. Time compression for art’s sake!] 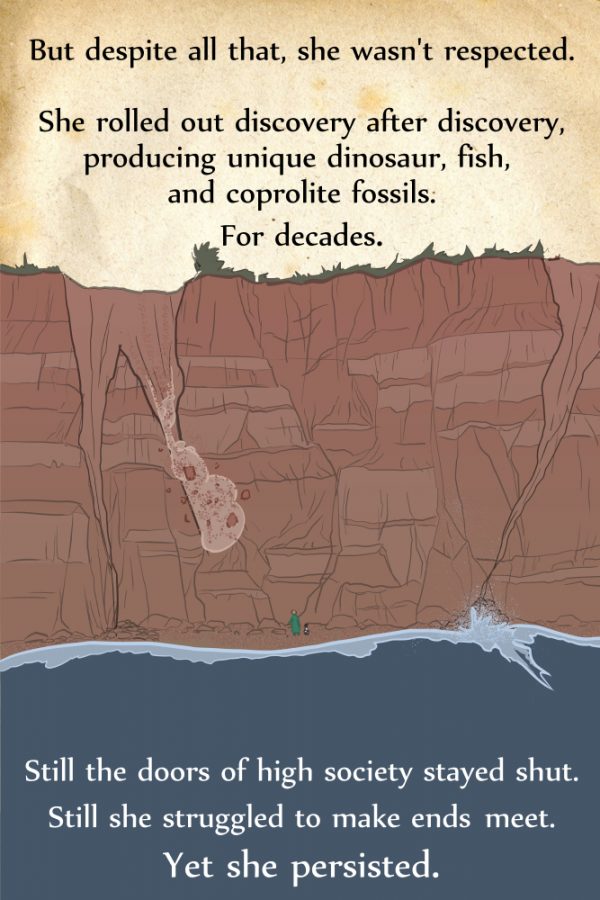 15 Among her other great discoveries: the first English Pteranodon (well, Dimorphodon) remains, a second complete Plesiosaurus, and a fish that was an evolutionary transition between sharks and rays. She also helped establish that coprolites were fossilized poop. She had five major discoveries – any one of which would be enough for a paleontologist to make their career – and got a decent chunk of money for each, but not enough to live off of in perpetuity. She had to keep achieving the impossible on a regular basis, just to survive. 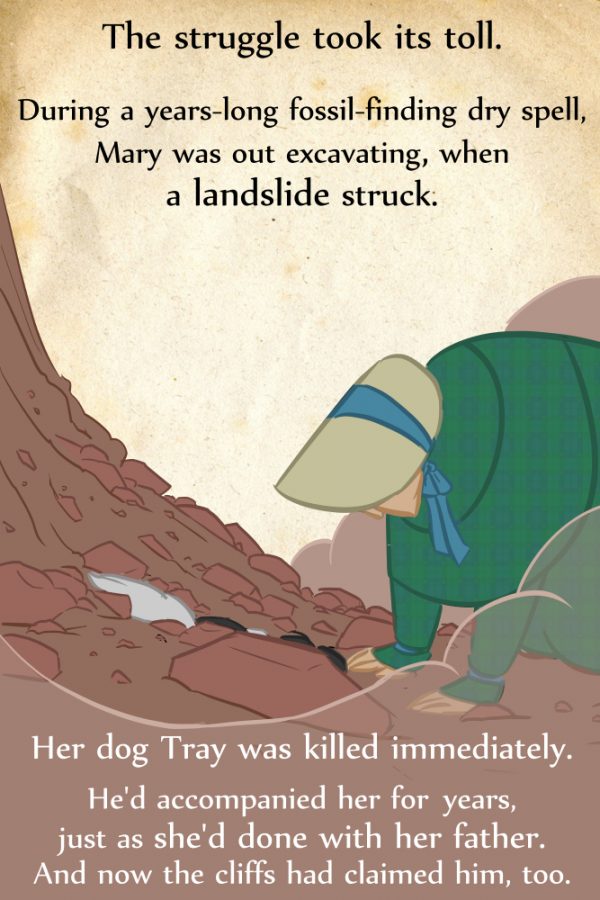 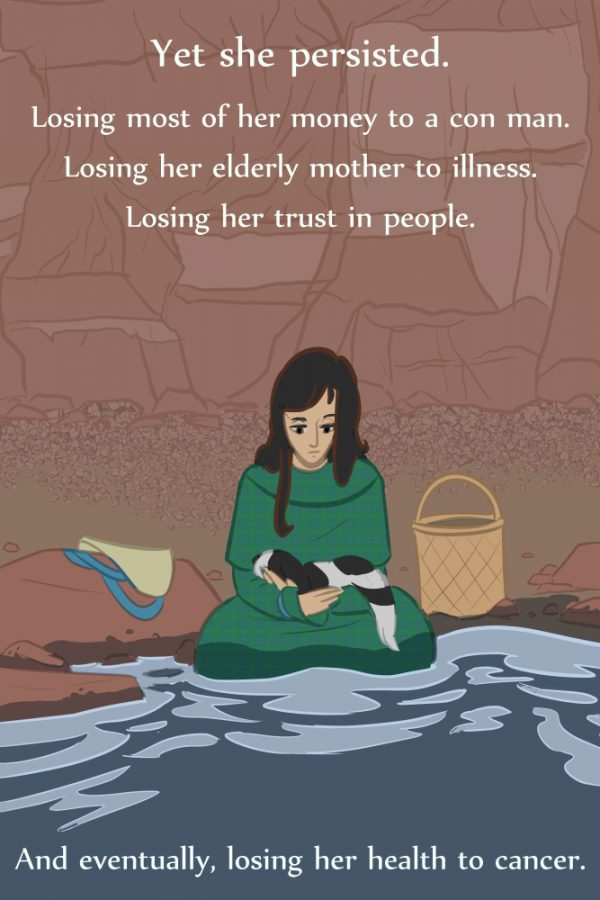 16 It’s actually unsure if she lost her money in an investment or to a con man. Regardless, it was almost all her life savings.[16. She was acutely aware that she was getting the raw end of the deal in much of her dealings. Writing to a friend in London, she said, “I beg your pardon for distrusting your friendship. The world has used me so unkindly. I fear it has made me suspicious to every one.”] 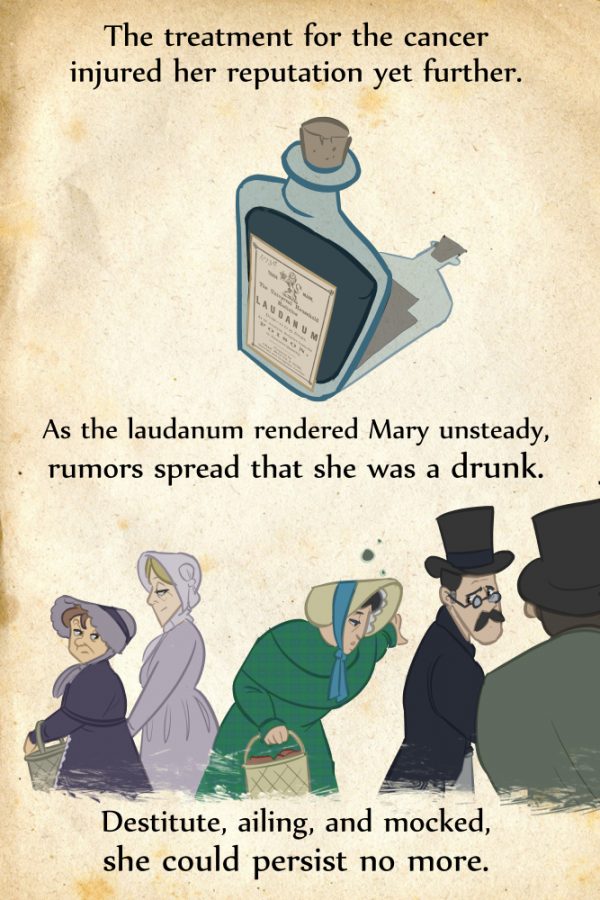 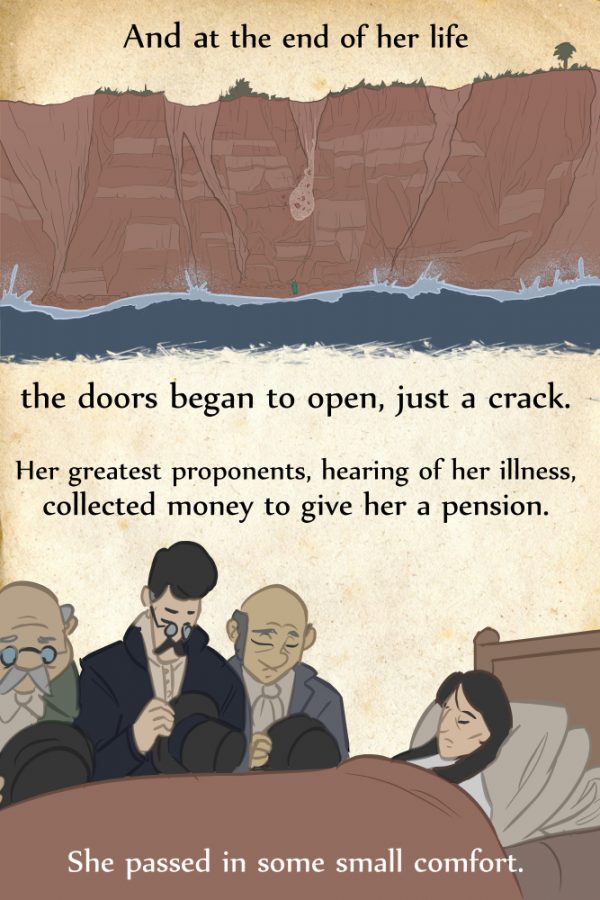 17 Her friends arranged a 40 pounds/year pension for her, and Honorary Membership of the new Dorset County Museum. While she was not admitted to the Geological Society until decades after her death, many of its members tried to do well by her in the end. I don’t know whether they were actually at her deathbed – honestly kind of doubt it. 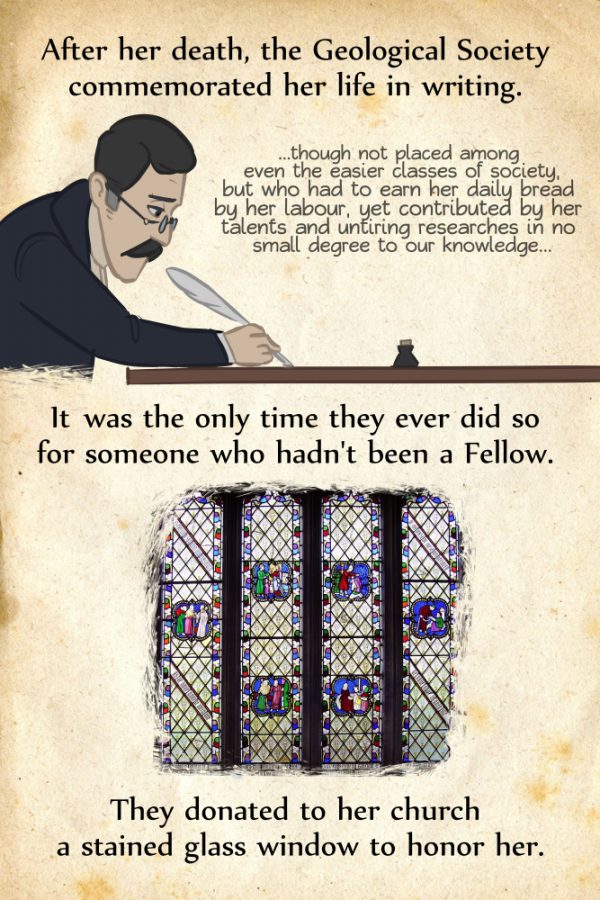 18 The window commemorates the important six Christian acts of mercy. Additionally, a species of fish was named after her, novels were written about her, and, in 1903, the “she sells seashells by the seashore” tongue twister was ostensibly written about her. The beach she plumbed for fossils, Jurassic Beach, became Britain’s first UNESCO site in 2001. 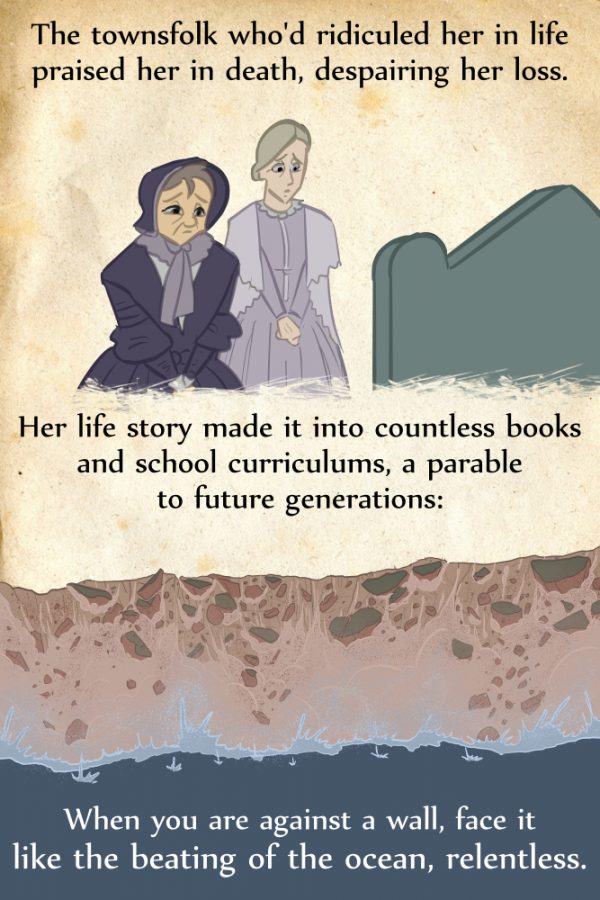 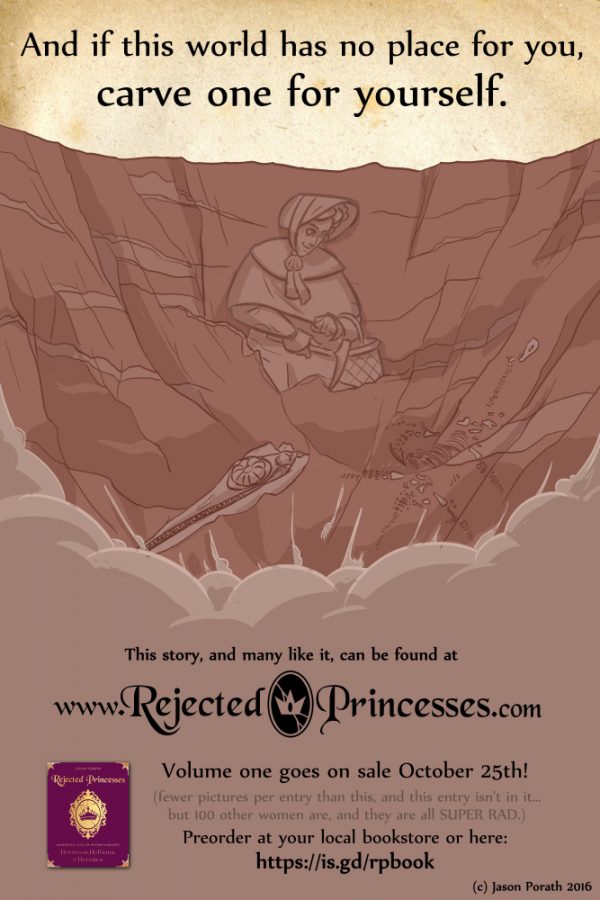 The central visual metaphor of the whole piece is “woman vs wall” – the massive, dangerous, impenetrable cliff also being a stand-in for the wall she faced trying to enter the ranks of geologists.

Remember, you have two weeks left to enter the Rejected Princesses Table of Contents guessing contest! Nobody has gotten all of them right yet!

My god, there were a ton of you this go-around.

Enough doom and gloom for a while. Let’s go for something lighter. Here’s your hint:

She sells seashells by the seashore.

Emling, Shelley. The fossil hunter : dinosaurs, evolution, and the woman whose discoveries changed the world.

Torrens, Hugh. Mary Anning (1799-1847) of Lyme; the greatest fossilist the world ever knew

There’s a She-Wolf in Paris
Let her out, she stomps the Brits

Next: Isabella of France
Prev: Gouyen 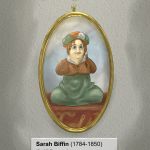 The Artist Who Painted With Her Mouth 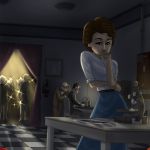 The Overlooked Discoverer of DNA