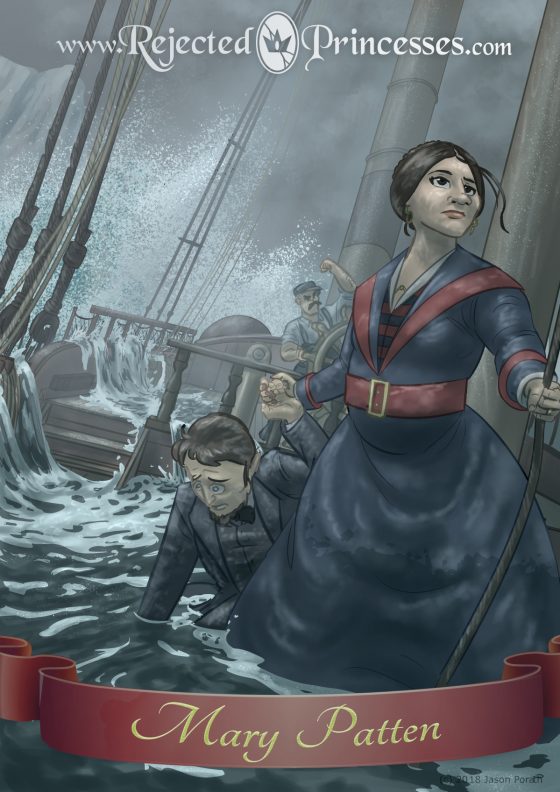 The first American woman to command a ship1 So this is a little bit of a murky claim. It’s certain that she’s the first woman who pilot a commercial ship, but I’m only mostly sure she was the first female American boat commander, period. The only other women I could find to rival this claim were river pirate Sadie the Goat — who would have been a decade or so later, and is possibly fictional — and Rachel Wall, who was a pirate alongside her husband, but did not, I believe, ever command a ship herself. Harriet Tubman helped lead a boat-based raid on plantations in 1859, three years after Mary’s voyage. It’s possible there were women in disguise as naval commanders, but I’m unaware of any who predate Mary Patten. was a pregnant teenager. She did it while fighting off a mutiny, nursing an incapacitated husband, and braving gale-force winds.

Mary Ann Patten (nee Brown) was the type who would’ve volunteered for the distinction, had that been an option. She came from a family of mariners, and, at 16, married into one too. A year into her marriage, she insisted on joining her captain husband Joshua on his first time captaining the Neptune’s Car. Together, the two went from New York to San Francisco, China, and London, before returning to New York.

Although Western women crewing a ship was rare and generally seen as improper  — ah, the Victorian era! —  Mary determined to make herself useful. She spent her time plowing through the ship’s small library, teaching herself medicine and how to navigate using sextants, compasses, and charts.

This would come in handy. 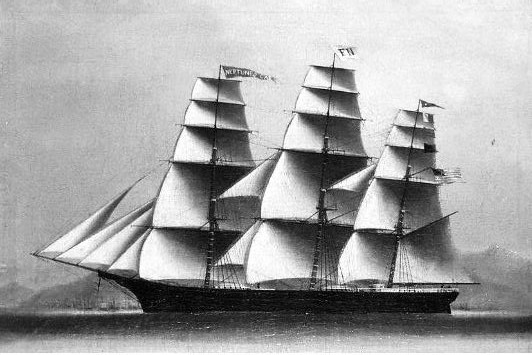 The Neptune’s Car, you see, was cursed as hell. It had only made one voyage before Joshua Patten coming on board. Why the quick turnover in captains, you may ask? Well, on its maiden voyage, 23 crew members were worked so hard they mutinied. The commander, one Captain Forbes,  then threatened to kill all of them, saying “they’ll either work or face being shot”. Upon returning to port, everyone lawyered up and began suing each other. So there was an opening for a captain.

But that maiden voyage doesn’t even scratch the surface of how screwed this ship was. The voyages after Joshua’s tenure on board would feature such highlights as:

And all of that still is NOTHING compared to Joshua and Mary’s second voyage on it.

Much of the reason for the hurry is that the financiers had money riding on this, beyond just delivering cargo. The Neptune’s Car was still a relatively new ship, and they wanted to prove it could make good time. They laid down money against four other ships running the same route — New York to San Francisco, via the southern tip of South America —  that Neptune’s Car would beat them to port. In the grand tradition of rich douchebags everywhere, they were gambling the lives of their employees to one-up other rich douchebags. 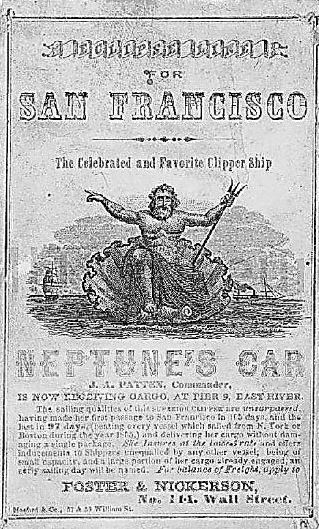 It was not to be smooth sailing.

Keeler proved an incompetent shitheel in record time. His list of infractions are staggering: he’d sleep through half his shifts; he set course through reef beds; he had to be ordered to do simple tasks; and finally, he just outright refused to do some tasks, like putting out sails. About a month in, Joshua put him in chains and confined him to his cabin.

While he didn’t have many other options, this choice proved deadly for Joshua.  He’d relied on Keeler to keep the course while Joshua slept. But with Keeler gone, the ship facing constant gales of snow and sleet, and no other crew members able to handle navigation — the second mate was illiterate, the third an idiot — Joshua had to stay up all day and night.

Increasingly, he relied on Mary to help confirm the position, course, and speed. He recognized she was a better mathematician than he was, even when he wasn’t out of his mind from staying up all day and night.

But by the eighth day of staying up, it became clear Joshua was out of his mind from more than that. After navigating to the Le Maire Strait, he collapsed. He’d developed pneumonia, which only exacerbated the undiagnosed ailment he’d started the voyage with: Tuberculosis meningitis.

Mary took control and, with the second mate’s help, parked the ship south of the deadly storms that had been rocking their boat. There she began looking after her husband. His situation was dire: the infection had reached his brain, and on top of being delirious, he’d become blind and partially deaf. 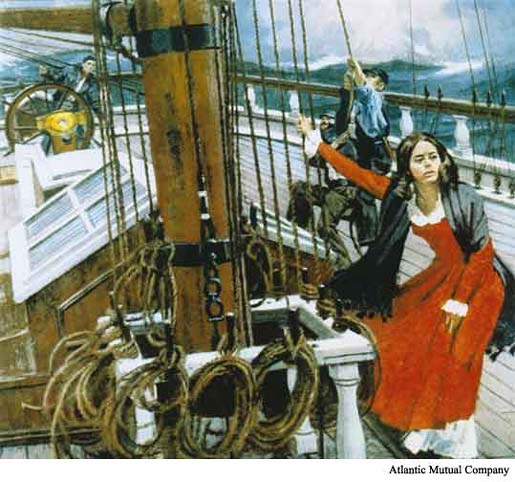 Compounding matters, Keeler began acting up. Hearing word of the captain’s failing health, he wrote Mary a letter, reminding her how perilous the coast was, and what great responsibility she shouldered. He graciously offered to rid her of the burden, and take control himself. She responded by informing him that since he’d had such trouble being first mate, she couldn’t possibly burden him with an even higher command.

When he heard this, Keeler tried striking up a mutiny to oust Mary from her command. It’s a testament to her ability and to the crew’s general good sense that they stood by her.

With Josh still out of commission, Mary steered the ship through the perilous waters south of the Cape, dodging inclement weather, collapsing glaciers, and mountains of ice. Finally, as they neared the Chilean city of Valparaiso, Joshua’s fever broke and he once again became lucid. However, he was evidently still suffering from brain ailments, as he soon made the executive decision to give command to Keeler.

This is what we in the business call a “boneheaded move.” 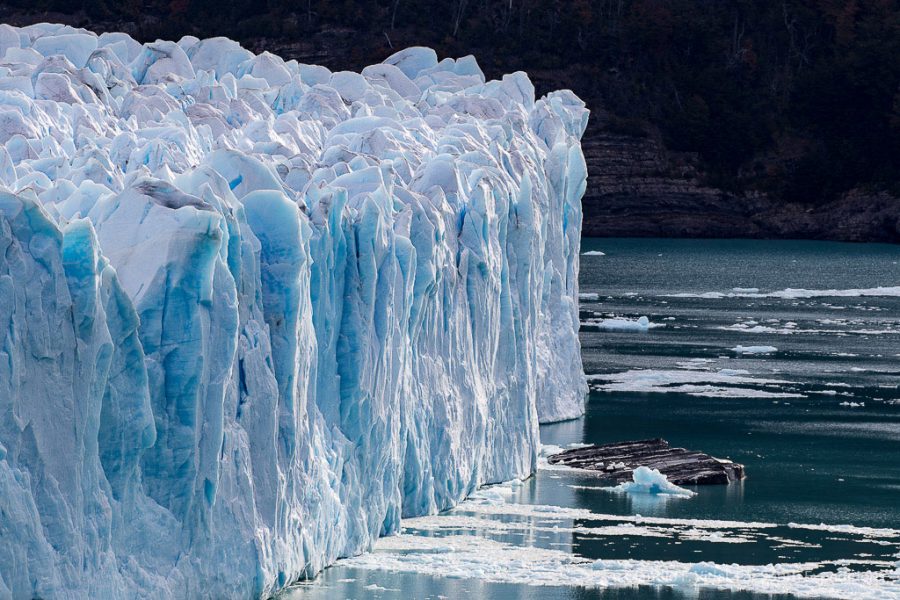 If anyone doubted Keeler was mutinous scum, he wasted no time in setting them straight. Refusing to let Mary on deck to take navigation  measurements, Keeler began secretly steering the boat to port at Valparaiso, despite explicit orders to head straight to San Francisco. However, Keeler did not reckon on Mary’s overabundance of competence — despite being largely confined to quarters, she still realized they were going off course. And to prove it? She Macguyvered up her own compass in the captain’s room. Nobody messes with Mary Patten.

And that was it for Keeler. Joshua had him demoted once and for all. He was clapped in chains and kept below deck.

Unfortunately, soon after that, Joshua relapsed, and he suffered 25 days of total blindness and deafness. Mary, by this point six months pregnant, was not about to waste any more time on modesty. She took full control of the ship and steered it straight to San Francisco, without further incident.

On November 15, 1856 — 137 days after they’d set sail — the Neptune’s Car pulled into port in San Francisco. The 19-year-old Mary had captained the boat for 56 of those days, through some of the most severe weather the region had seen. She had not changed clothes in nearly two months prior to arrival.

And she still beat three out of four boats to port.

As for Keeler? He cozied up to one of the ship’s mates, who helped free him once they pulled into the bay. He then jumped overboard at the earliest opportunity, escaping arrest. I am unsure what happened to his treasonous ass afterwards. 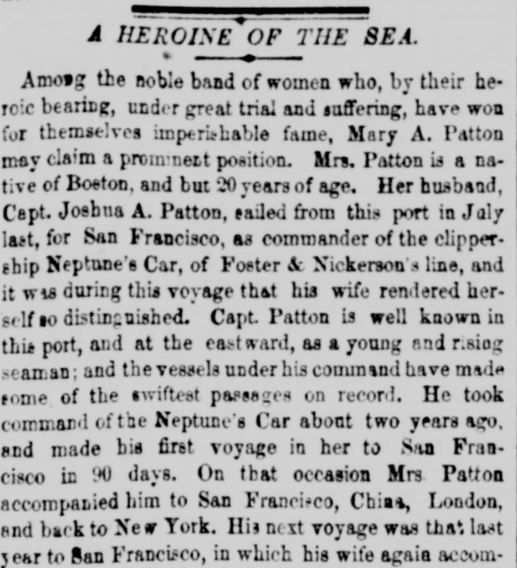 Upon arrival in San Francisco, Mary became a national sensation, with newspaper after newspaper interviewing her (and usually getting a fair number of basic facts wrong). But despite the media attention, she struggled to pay for Joshua’s care — Foster & Nickerson refused to pay out his wages (in the end, they never would). It was only after public outcry for the insurance company to award Mary $5,000 that the Atlantic Mutual Insurance Company showed their magnanimity by sending Mary $1,000. The cargo she’d saved was worth $350,000.

Unfortunately, the Patten’s situation never improved. By February 1857, Mary and Joshua made it back to their home in Boston — but Joshua’s condition had only worsened. Shortly after giving birth to their son, Joshua Jr., Mary had Joshua committed to an asylum. By July, her husband was dead. Shortly thereafter, Mary’s father, a sailor himself, was lost at sea. By 1860, Mary herself had contracted tuberculosis, and on March 17 of the following year, she died, just shy of her 24th birthday. She was buried next to Joshua, with nary a mention of her groundbreaking work on her headstone.

However, her deeds are not forgotten. A century after her fateful voyage, the U.S. Merchant Marine Academy in Kings Point, NY opened a hospital. They named it Patten Hospital, in memory of the “Florence Nightingale of the Ocean,” the woman whose courage and grace they would always seek to emulate. 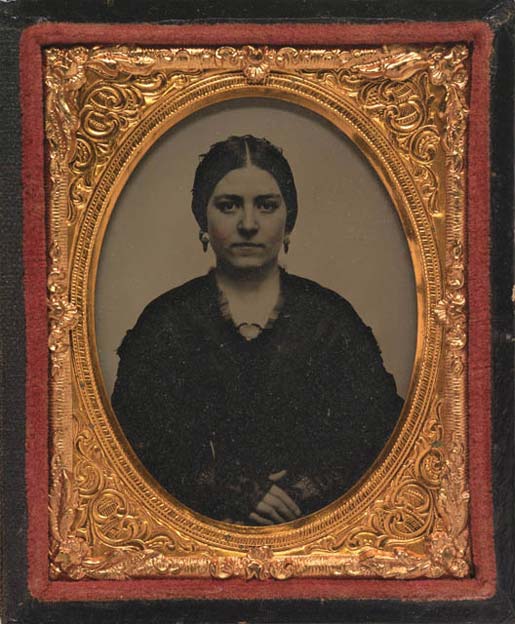 Mary is here standing on the deck of Neptune’s Car, holding Joshua’s hand as he struggles with his ailments. This wouldn’t be quite accurate – Joshua was in his cabin most of the second half of the journey – but I wanted to visually represent how she helped him, and the adversity she faced in doing so. In the first version of this, I had her holding a sextant in her right hand, but it didn’t really get to the drama of the situation.

In the background, the first mate swears at her, as they’re ravaged by storms. In the far background lurk the glaciers they encountered around Cape Horn.

I had a lot of fun drawing the water flowing in. Reminded me of doing liquid simulation work on animated movies. Ah, memories…!

One of the first women to command a ship in the modern age, she faced down mutineers, took care of a sick husband, and sailed to safety — all while pregnant, before her 20th birthday.

Caldwell, Bill. Rivers of Fortune. (I can’t recommend this title – it has a number of outlandish claims that are less than substantiated.)

Northrop, Everett Hollister. “Florence Nightingale of the Ocean : Patten Hospital at Kings Point is named in honor of Mary A. Patten, this is the reason” Kings Point, NY : U.S. Merchant Marine Academy, 1959

“‘Whither You Go I Shall Go’: Merchant and Whaling Wives.” Mariners Museum. http://www.marinersmuseum.org/sites/micro/women/goingtosea/whither.htm

This WW2 woman could not run as fast as her divine Greek code-namesake, but what she lacked in speed, she made up for with a trusty sidekick of sorts. 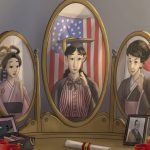