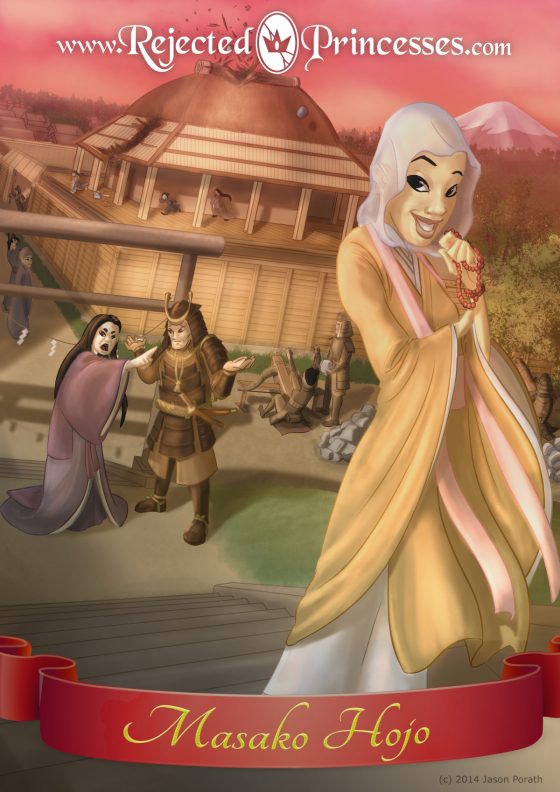 Pop quiz – you find your significant other has, during their “hunting trips,” been cheating on you with another woman. Do you: a) Leave them quietly? b) Toss them to the curb? c) Try to work it out? d) Hire an army to reduce the other woman’s house to a pile of smoking rubble?

If you answered D, you have something in common with Masako Hojo, unofficial seventh shogun of Japan.

Surprisingly, he actually did, and he did so well. Over the first several years of the marriage, Yoritomo crushed western Japan and became the fourth shogun in history. Simulataneously, though, he continued his horndog antics: while Masako was pregnant, he started cheating on her with several women, including one Lady Kame. It is at this point that Masako (with the aid of her family) got a small army to flatten Lady Kame’s house. She survived, somehow.

It should be noted: this was actually not that uncommon! Old wives would get revenge on new wives so often in olden Japan that there’s even a word for it: uwanari-uchi (literally “strike of the after-wife”, which sounds like the world’s most acrimonious ninja move). Traditionally, the wife’s family would be the one handing over a dowry in the marriage, so they had a lot riding on it. It was entirely sensible for families to band together in deterring husbands from straying, and thus them from losing power. So while, yes, it was an asshole move, it was also called playing the game. And Masako Hojo played to win.

And this was hardly the last time Masako openly defied her husband (you know, the most powerful man in Japan). When Yoritomo impregnated another lover, Masako ordered the woman dismissed and then run out of town. Later, Yoritomo started crushing on a court dancer named Shizuka Gozen, who didn’t want anything to do with him – and let it be known by publicly insulting him in poem form. This delighted Masako, and she took Shizuka under her wing, even trying to help her get out of town.

Some years after that, Yoritomo died in fairly klutzy fashion, by being thrown from a horse. This resulted in such a loss of face that rumors immediately started springing up that he’d actually been assassinated, or that a jealous Masako had somehow detached her spirit from her body and haunted him to death. That particular rumor got popular 500 years after his death, which shows just how long-lived Masako’s reputation was. The truth of the matter is that she probably loved him (possibly overly) intensely to the end of her days, but that doesn’t make for as good a story.

Masako stood in front of the house, assumed her best “come at me bro” stance, and said, “if you’re gonna kill him, you gotta go through me first.”

Immediately after Yoritomo’s untimely demise, Masako became a Buddhist nun, but she kept getting pulled back into politics. Her son Yoriie assumed power and started being a total dickbiscuit, killing people he didn’t like, seizing property, and playing sports (which, to read the accounts, was apparently a more grievous offense than the first two). When he made plans to murder a governor named Morinaga, Masako left her temple, stood in front of Morinaga’s house, assumed her best “come at me bro” stance, and said, “if you’re gonna kill him, you gotta go through me first.”

The straw that broke the camel’s back was when a bunch of dudes tried to kill both Masako and Yoriie. Seeing how utterly incompetent her son was at dispatching these weak-tea assassins, she stepped in to show him how it’s done. So she took control of the shogunate, obliterated the assailants, and made her son give up the claim to the throne. From there on, she ruled pretty much directly — despite the fact that she was, on paper, just a common nun.

She was a very successful leader. With the aid of her brother, she immediately quashed other claimants to the throne. When her brother died, she wiped out his remaining family as well (to be fair, they were kind of jerks). She established the Hojo dynasty, which survived for 100 years, an enormous length of time for the era. The Hojos only went down after a decade of simultaneous assaults from other samurai families, an invasion fleet sailed in from Korea, and the fucking Mongol Horde landed in Japan all at the same time.

I’ll leave you with an anecdote from late in her life: at one point, she was given an enormously high-profile award, made all the more impressive that she was only the second layperson to ever get it. When the emperor of the time set up an imperial audience to give it to her, she didn’t even show up. Instead she remarked that an old country nun had no use for such things, turned to go home, and presumably dropped the mic in the process.

(enjoy the art? you can get it as a poster, shirt or phone case!)

The image here is a bit of a mishmash of her life as opposed to any specific moment. Lot of little details, so you may want to click to embiggen the image.

I have got to find a way to automate this.

Running the shogunate from a convent.

Of Corpses and Kimonos
Masako Hojo was not a walking corpse. Not that you'd know it, from the way I drew her clothes.

Even if you’re strong enough to lift a kayak over your head, you still couldn’t beat one of her lice in arm-wrestling.