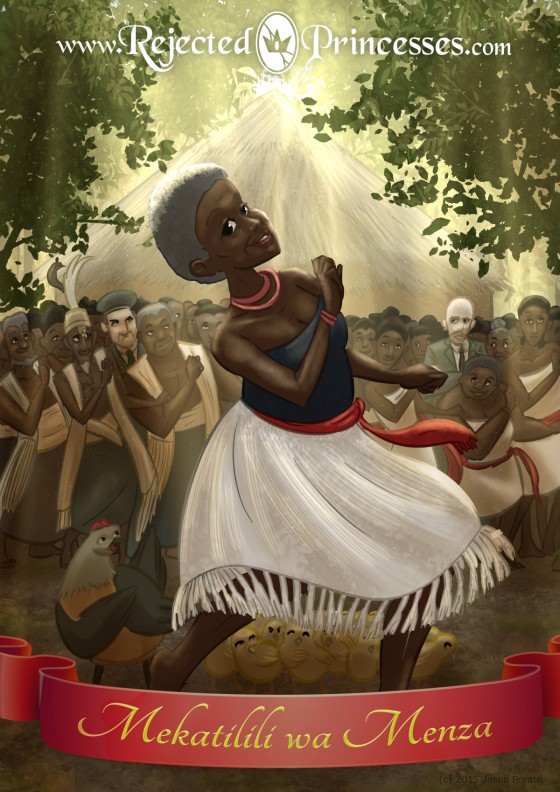 The year is 1913. The place is Kenya. The British are behaving badly.

What did they do now, you ask? Whip out your “colonial hooliganism” bingo cards:

Now, these tried-and-true methods had already resulted in many conflicts around the world with various colonial powers (some examples I’ve covered: the War of the Golden Stool, the Igbo Women’s War, Maori conflicts, and the Dahomey wars). And like their rebellious forebears, the Giriama, an east Kenyan tribe, was about to start a ruckus over it.

If you’re a regular reader of this blog, it should come as no surprise that the rouser of said ruckus was a woman.

Mekatilili wa Menza had little business (or precedent) doing this. Aghast at the notion of Giriama fighting Europeans for Europeans, she began complaining long and loud to anyone who would listen. This was doubly unusual: not only did Giriama women rarely (if ever) have this level of political involvement, but she was effectively a commoner. Her only claim to higher social standing was the fact that she was a widow, which culturally afforded her some room to speak. She milked that for all it was worth, agitating for an end to free labor, overtaxation, and the British-installed stooges. And she did so in dance form.

The dancing that Mekatilili engaged in is called kifudu. It’s a type of ecstatic dance usually reserved for funeral ceremonies, which meant the sight of an elderly woman excitedly jittering from town to town was… somewhat unusual. Her kifudu attracted a crowd of onlookers wherever she went, and soon the onlookers became devoted followers. Within weeks, the Giriama colonial system had all but shut down due to her efforts. All of which earned her the attention of the British colonial supervisor, Arthur Champion.

There is a legend of the two meeting — likely apocryphal. In it, Mekatilili approached Champion and let loose a mother hen and a number of chicks in his house. She laid out a dare to him: try to pick out a single chick and see what the mother hen does. He did as instructed and, in a turn of events shocking nobody, the mother hen pecked the living hell out of him. See, said Mekatilili? This is what will happen if you take Giriama men for your war.

In response, Champion took out a gun and shot the mother hen.

This was not a particularly subtle piece of metaphor.

Mekatilili ramped up efforts after that. With the aid of medicine men, particularly a fella named Wanje wa Madorika, she arranged a widely-attended meeting at a kaya, one of the traditional Giriama forest temples that the British had pooh-poohed. There, the elders administered sacred oaths so that nobody would cooperate with the British, and the Giriama left that meeting with a renewed sense of rebellion.

The British responded by also ramping up their own efforts. In short order, they confiscated 1/5th of the Giriama lands, ordered the Giriama to move, killed around 150 of them, burnt 5000 homes to the ground, destroyed a number of kayas with dynamite, and arrested several key members of the rebellion — including Mekatilili and Wanje.

Prison did not hold Mekatilili and Wanje for long. The larger problem they faced after escaping was getting back home. Shipped off to the far reaches of western Kenya, Mekatilili and Wanje were nearly 600 miles of dangerous wild land away from home. So they began to walk. This was a borderline incomprehensible feat to the British – the route wound through areas infested with wild animals which no European would dare traverse. And yet, the duo made it. Moreover, by the time they got home, they’d fallen in love and were man and wife. There’s frustratingly little information on this journey, so substitute whatever middle-of-the-movie half hour romcom antics your heart desires.

In the years following, when he found that Mekatilili had returned and that the Giriama were again sliding towards open revolt, Champion realized that he was fighting a losing battle. With the British resources stretched thin due to World War I, and a disproportionate amount of effort being spent in the hinterlands of Kenya compared to the benefits available to the crown, Champion threw in the towel. The kayas and tribal councils were reinstated. At the head of the new council was Wanje. And at the head of the newly-established women’s council was Mekatilili.

But, truth be told, the story does not have a happy ending after that. For whatever reason, the new kayas never received much support, and their newly-entrenched isolationism did not serve the Giriama well. As Kenyan business developed, the Giriama continued on their path of being small-scale producers, almost completely disconnected from the larger economy. In present day, they’re one of the poorest and least developed regions of the country, and regularly suffer from bad access to clean water and poor sanitation.

According to legend, Mekatilili herself died while pounding grain in the field, sinking straight into the earth where she fell. This legend ties her closely with Mepoho, a Giriama prophet who’d ostensibly predicted Mekatilili’s deeds decades earlier and had met a similarly subterranean end. Mekatilili’s provincial story was largely forgotten until several years ago, when the Malindi District Cultural Association began to herald and reinvent her as a local hero. Gradually, the oral history was codified and word spread – similar to how the world learned of other African heroines, like Yaa Asantewaa.

All of which indicates that there are untold scores of local heroines like this all around the world — we just do not know about them. Yet. 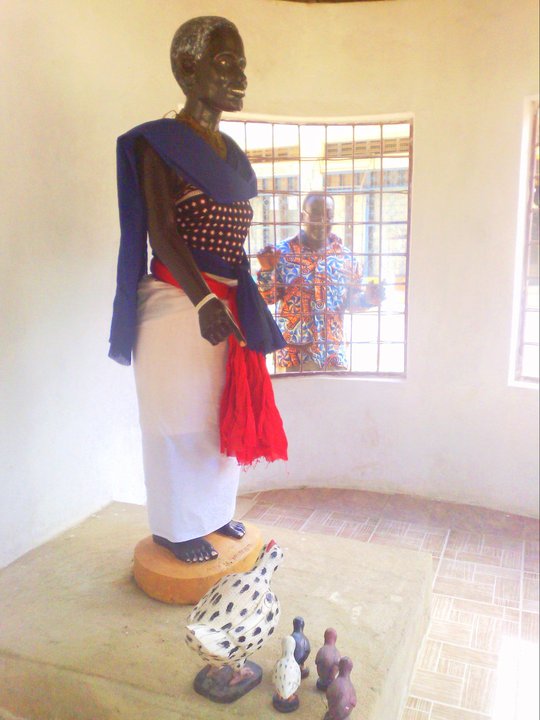 Almost a clean sweep this time!

This Kenyan heroine rallied support against the British the best way she knew how: dancing everywhere she went.

Nyamweru, Celia and Neil Carrier. “The (re)creation of a heroine: the case of Mekatilili wa Menza.”

Maina, Ephalina A., Wycliffe A. Oboka, and Julia Makong’o. History and Government 3.

A hungry hippo is bad, and a hungry firebreathing hippo is worse, but you know who’s even badder than that? This magical girl.