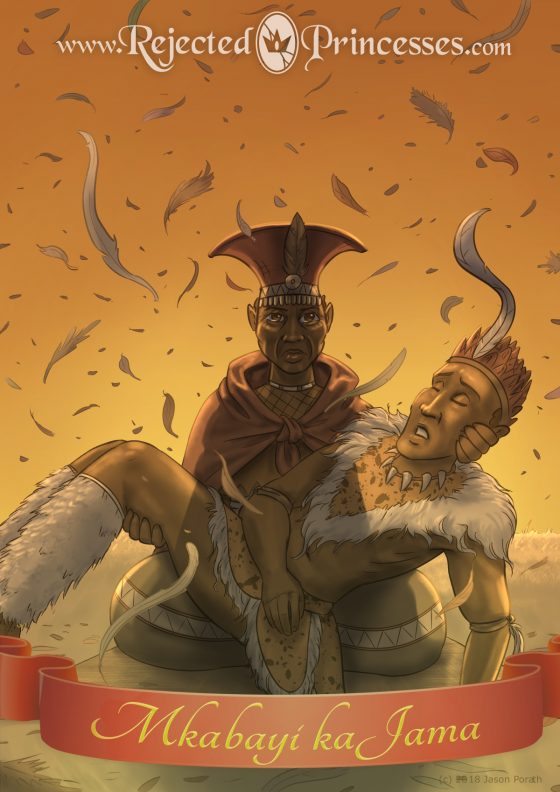 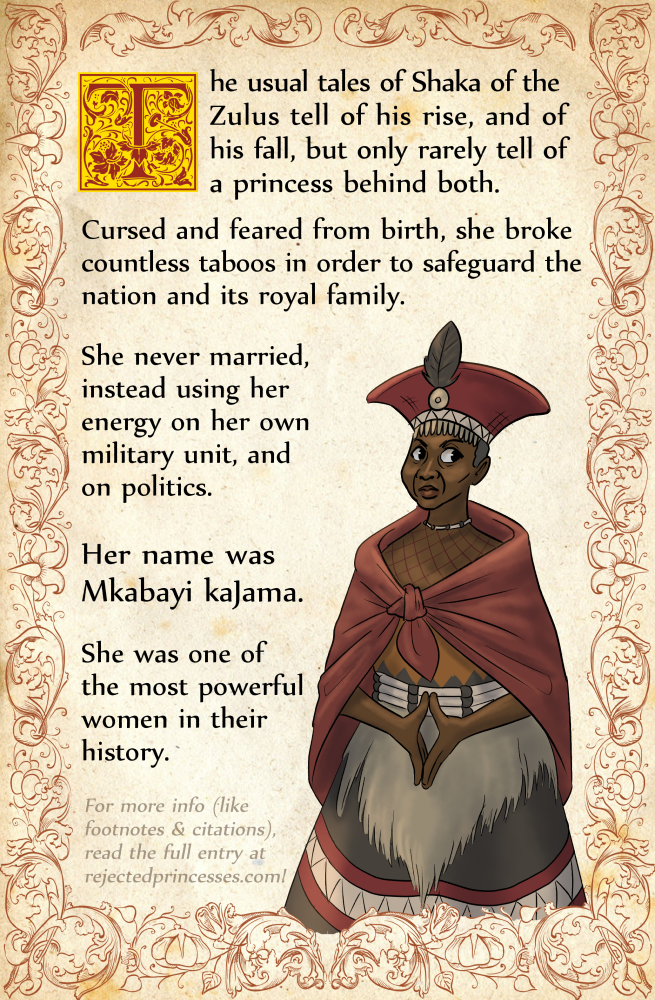 1 Mkabayi is sometimes also spelled Mnkabayi. kaJama just means “of Jama” — Jama being her father. Shaka’s name, for example, was Shaka kaSenzangakhona, and not Shaka Zulu. Actually, technically his name wasn’t even Shaka. More on that in a later footnote.2 The military unit referenced here is the izigodlo, described by Maxwell Shamase as a “military harem.” Hers were the ebaQulusini, which translates to “where they pushed out buttocks.” I do not have more information on that name. 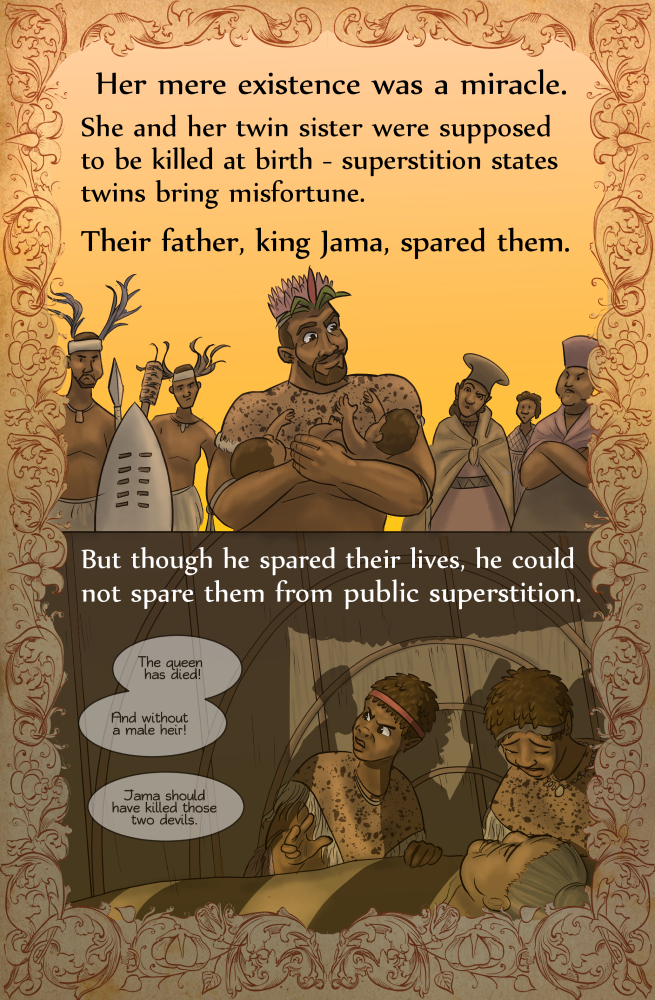 3 I could not find the name of Mkabayi’s mother. She had, I believe, one other sister, Mawa. Mawa may be a half-sister. The three of them were often described as acting as a political unit, but Mkabayi was always in the lead. 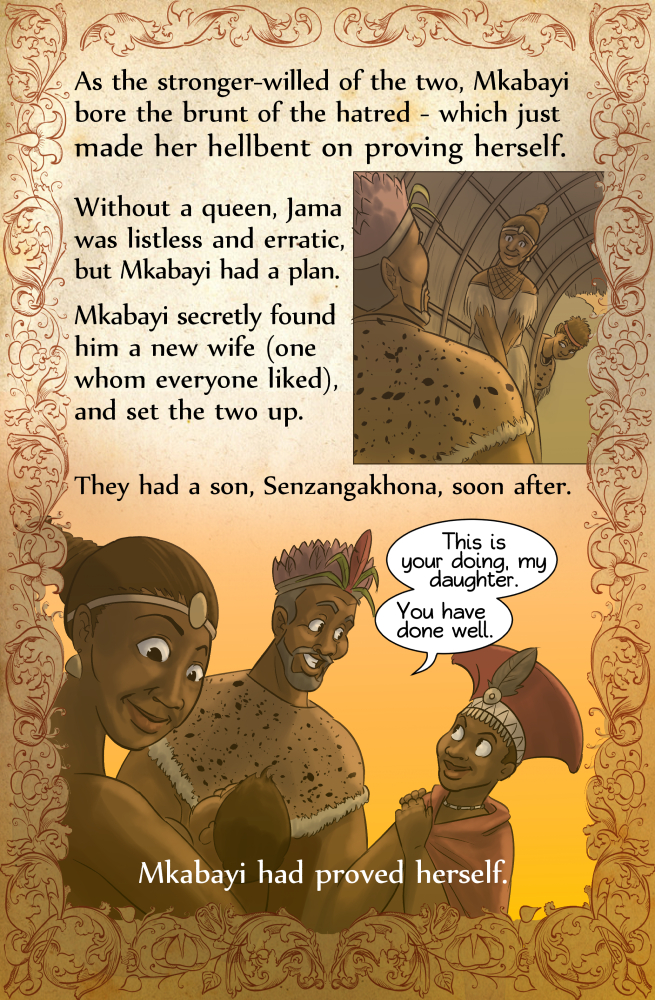 4 Jama’s erratic behavior included marrying a pregnant woman, who gave birth to a son, Sojiyisa, who was totally unrelated by blood to Jama. This muddied the lines of succession and was not a popular move.5 Jama’s new wife was named Mthaniya. Some books listed her as Mkabayi’s mother, which… is impossible.6 So when Mkabayi presented Mthaniya to Jama, he said Nenzengakhona, usually translated as “you have done accordingly,” which I interpret as something closer to “you have done well.” Senzangakhona’s name means “we have done accordingly.” 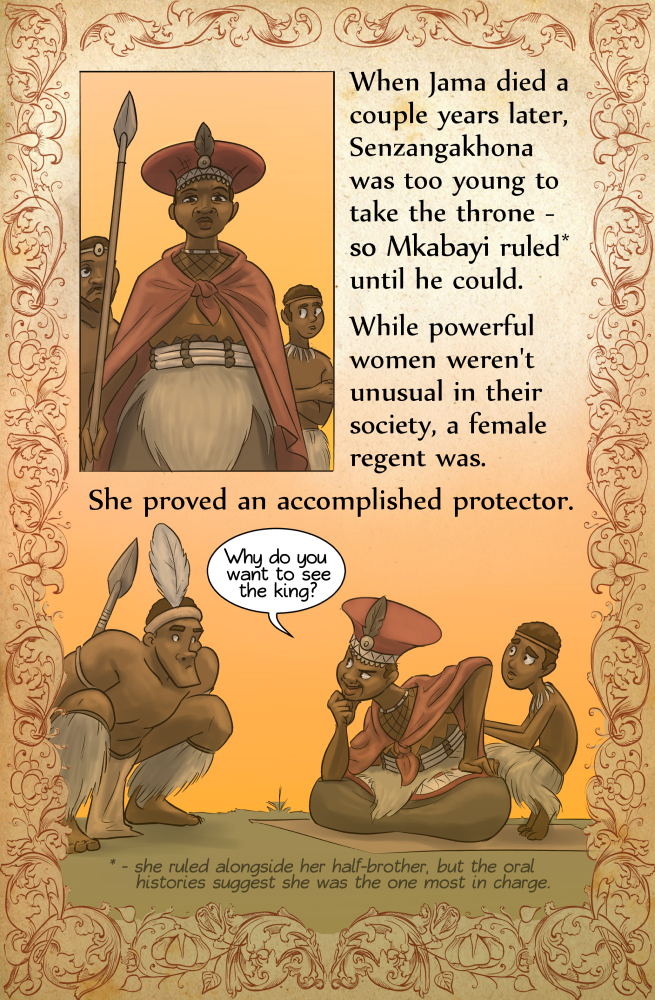 7 Mkabayi’s half-brother with whom she ruled was named Mudhli. As half-brother to Mkabayi, he was ineligible to take the throne himself. Shaka killed Mudhli pretty early on in his reign.8 Her praise poem (mentioned later) indicated she was an effective and fair-minded gatekeeper, controlling access to the king — likely meaning both Senzangakhona, and, later, Shaka. 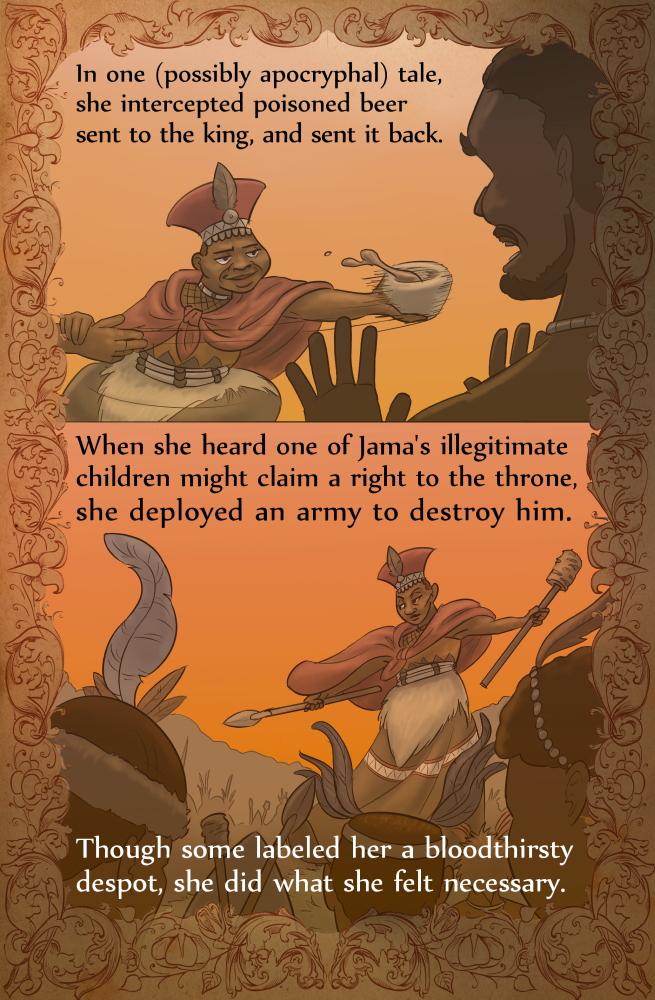 9 The poison beer plot is a little confusing. Mthaniya, the woman Mkabayi had set up with Jama, married Jama’s brother Vubkulwayo, and had a kid. Vubkulwayo wanted his son to be king, and sent poisoned beer to kill Senzangakhona. Mkabayi intercepted it and sent it back. In one (likely apocryphal) version, Vubkulwayo’s mother dies from drinking the poison beer. In another story, though, she shows up later on, so this whole story is a little suspect.10 The illegitimate child in question was the previously-mentioned Sojiyisa, who was of no blood relation to Jama (Jama had married Sojiyisa’s pregnant mother, but wasn’t the father). One source said Sojiyisa was killed because of tribal differences more than a succession claim. 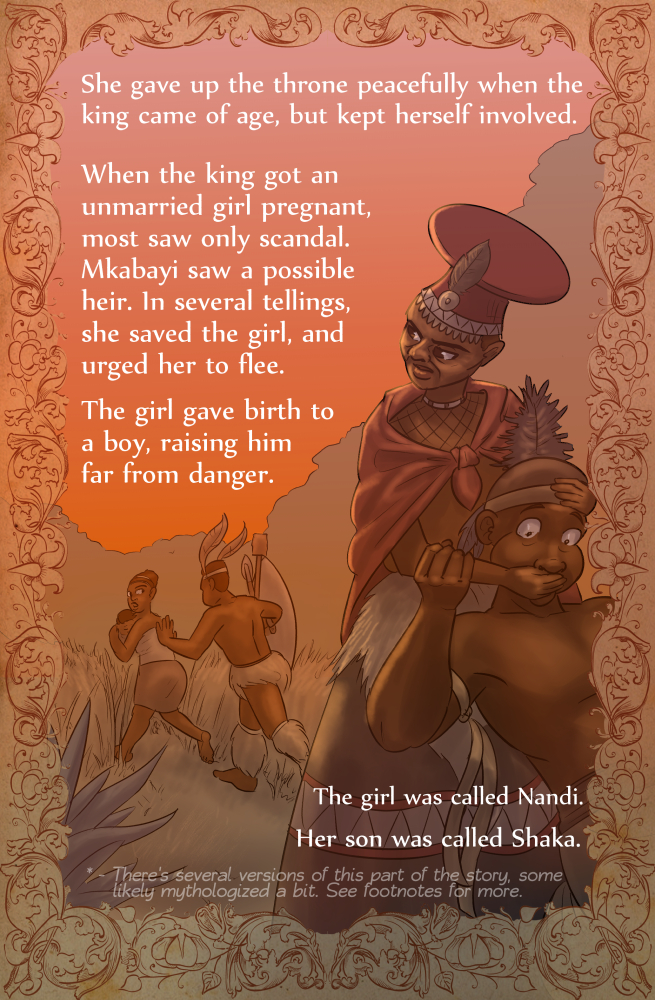 11 This part of the story is one of the most unclear, due to multiple versions. What’s known is that Nandi got pregnant when she was thought unable to do so, and it was a scandal. Most versions indicate she was in danger should Senzangakhona find out about it. She fled, and in several versions, Mkabayi enabled this, through warning her and/or killing a man who was going to tell the king about it. In another version, Mkabayi told Senzangakhona that she’d killed the newborn, though she hadn’t. Some of this may be later reinventions. Regardless: because Shaka was illegitimate, he and Nandi were heretics for most of his childhood.12 Shaka isn’t actually his given name. It is a reference to a type of parasite that was supposed to have prevented Nandi’s pregnancy, and a reference to his illegitimacy. According to this speech by a Zulu chief, his given name was Sgidi. 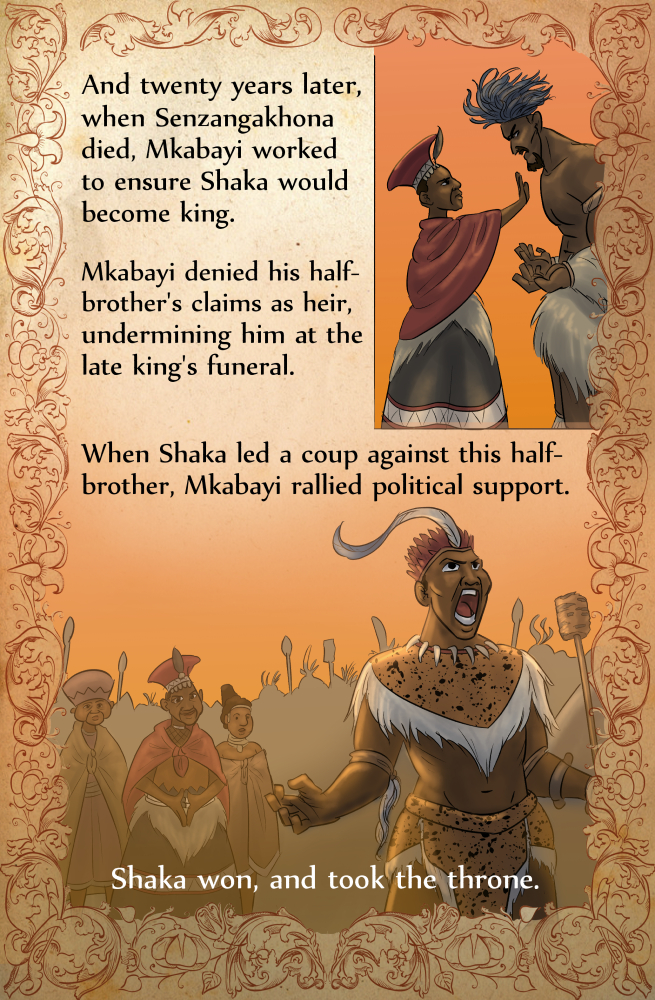 13 This half-brother was named Sigujana. Although he would briefly take the throne before Shaka wrested it from him, Mkabayi denied Sigujana the ceremonial honor of participating in the royal funeral as the symbolic heir. She and her sisters arranged political backing for Shaka. 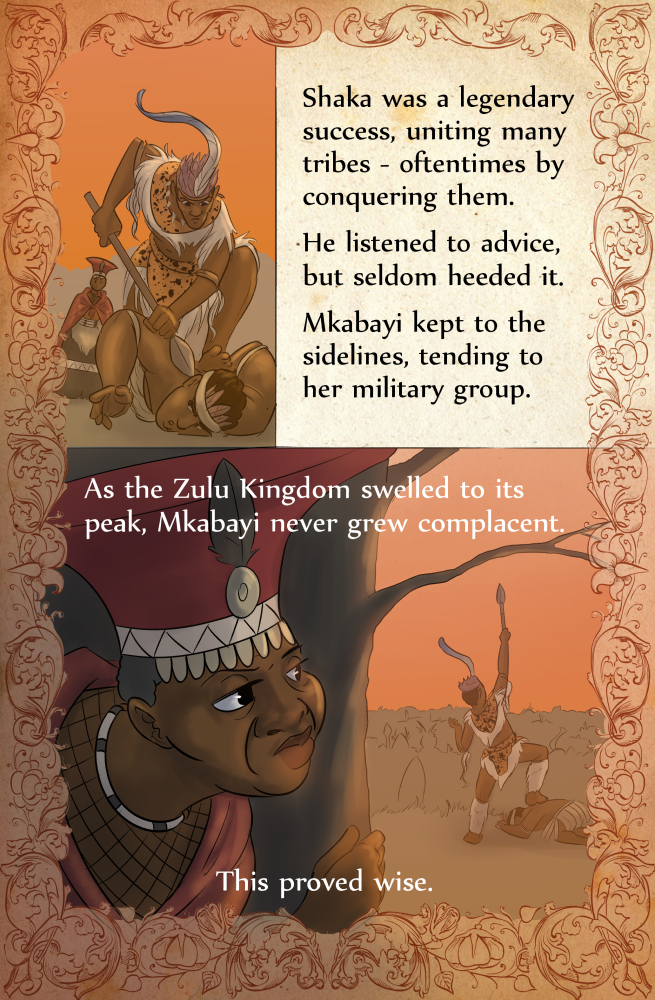 14 Here’s where you can dive into any of a hundred different history pieces about the life of Shaka. Summary: he was brutal, he was effective, he was quite warlike. This story isn’t about him, so, skipping it. 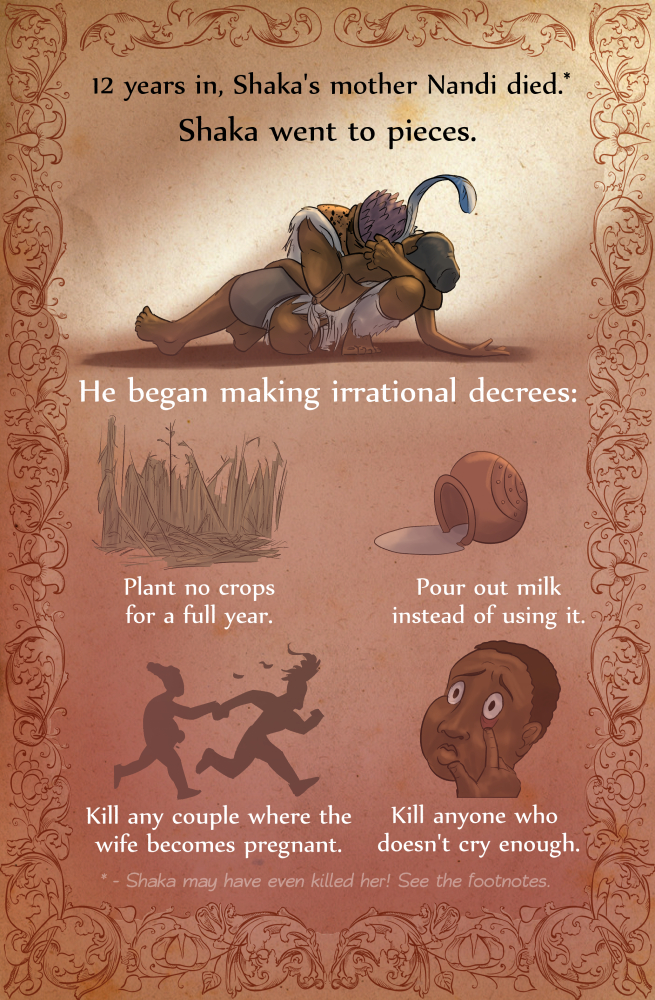 15 Shaka’s matricide is the conclusion of historian Caellagh Morrissey. The reason being that he suspected her of having another child who might be to the throne. Others say she died of dysentery. The story may be a smear campaign concocted later on by Shaka’s enemies, but it’s pretty widespread.16 The scale of the mourning is a bit hard to pin down, but sources cite between 1,500 and 7,500 people killed during this period. What of this is true and what is rumor is a bit difficult to determine, but it’s agreed there was famine and suffering. 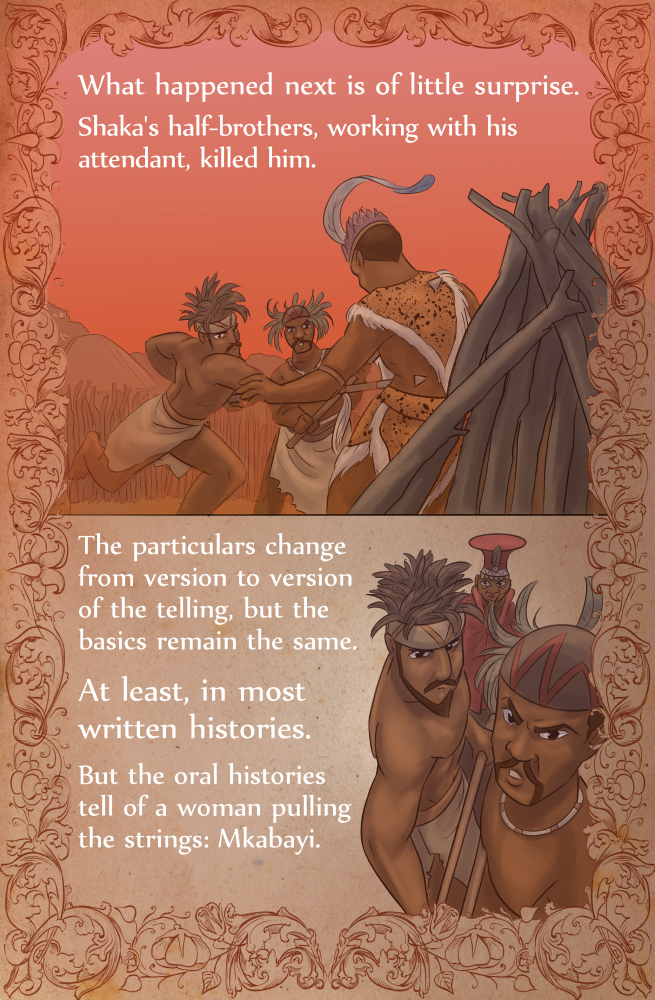 17 The conspirators with Mkabayi were his half-brothers Dingane and Mhlangana, and his servant Mbopha. In the most detailed telling, Mbopha struck him first with an assegai (spear) in the cattle kraal. 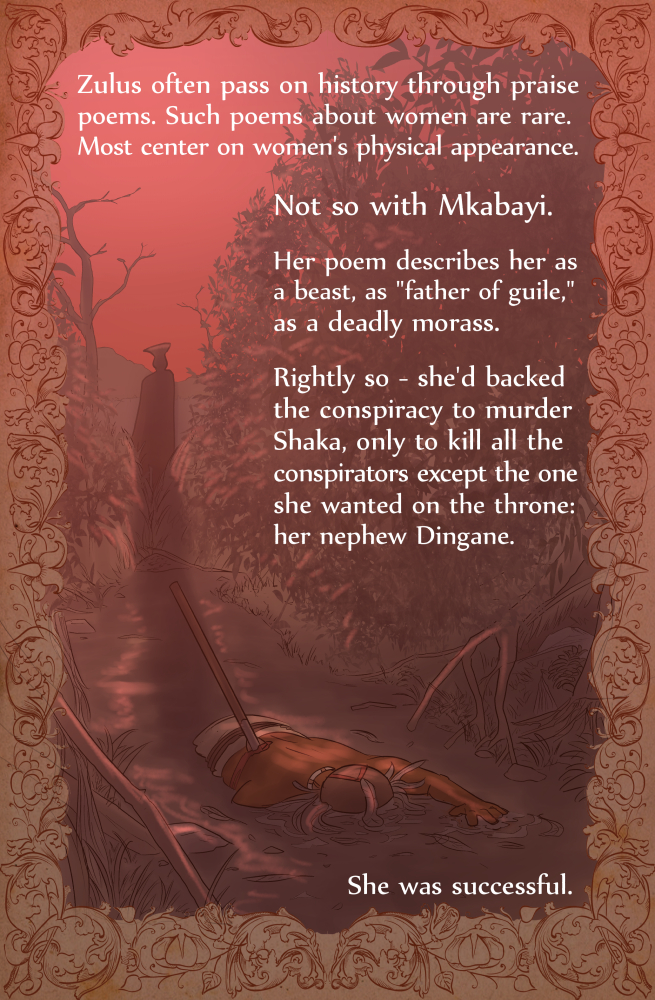 18 Yeah, her praise poem refers to her with male pronouns. Zulu oral tradition meant it as an honor.19 Poems about Shaka’s mother Nandi, by comparison, describe her uncharitably as loud-mouthed, flirty, long-limbed, and ungainly. Phrases used include “father of laziness” and “she whose legs are never closed, except at the view of her husband.” 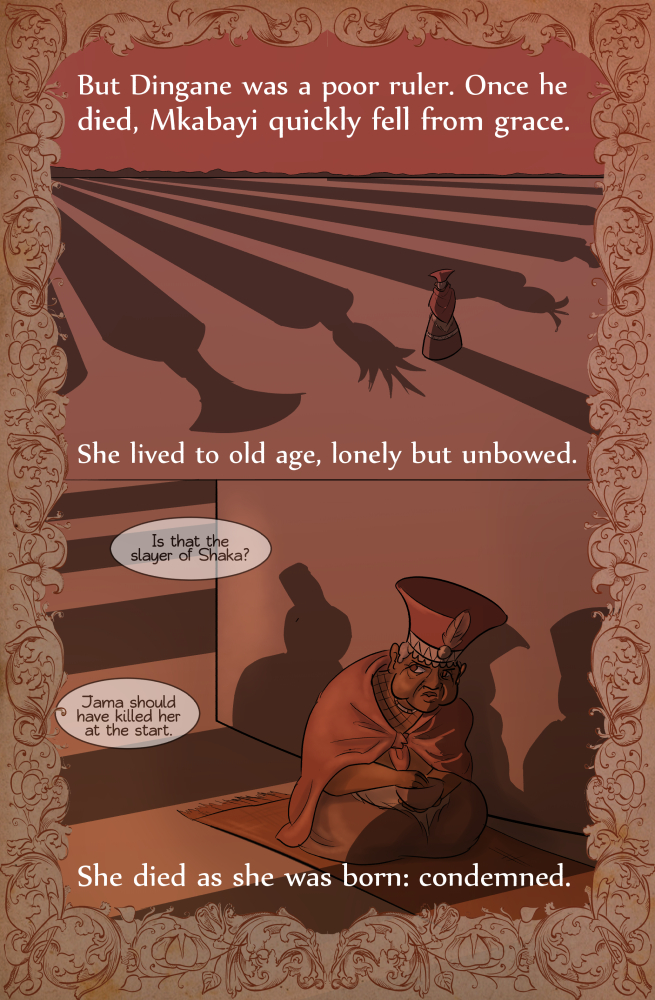 20 Dingane was not well-respected, and was deposed by his brother Mpande (who was backed by the Boers) 12 years after Shaka’s death, in 1840. Mkabayi died in either 1840 or 1843, depending on the source. 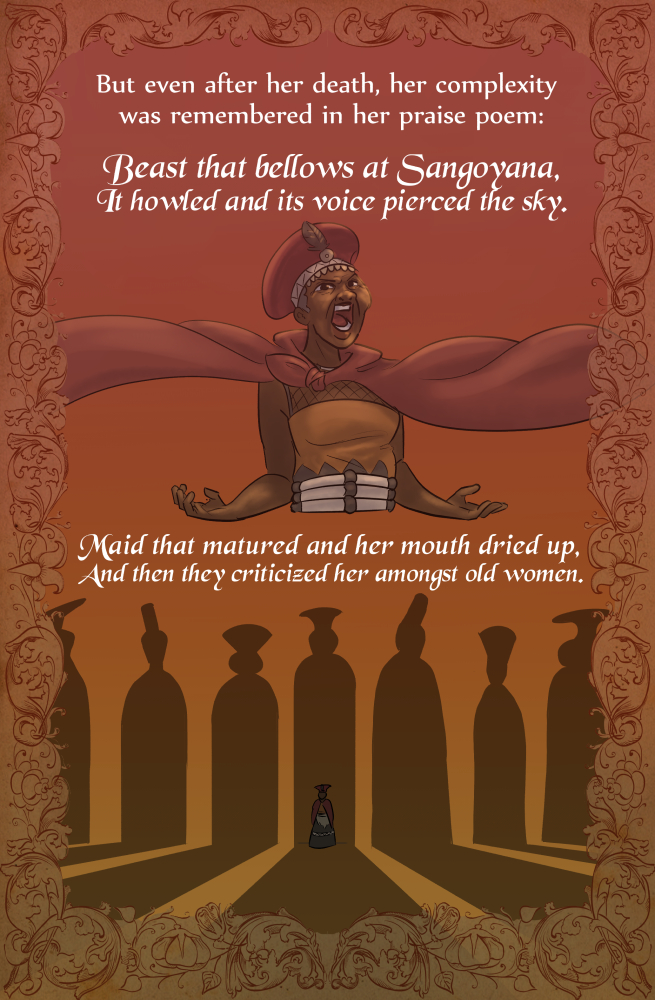 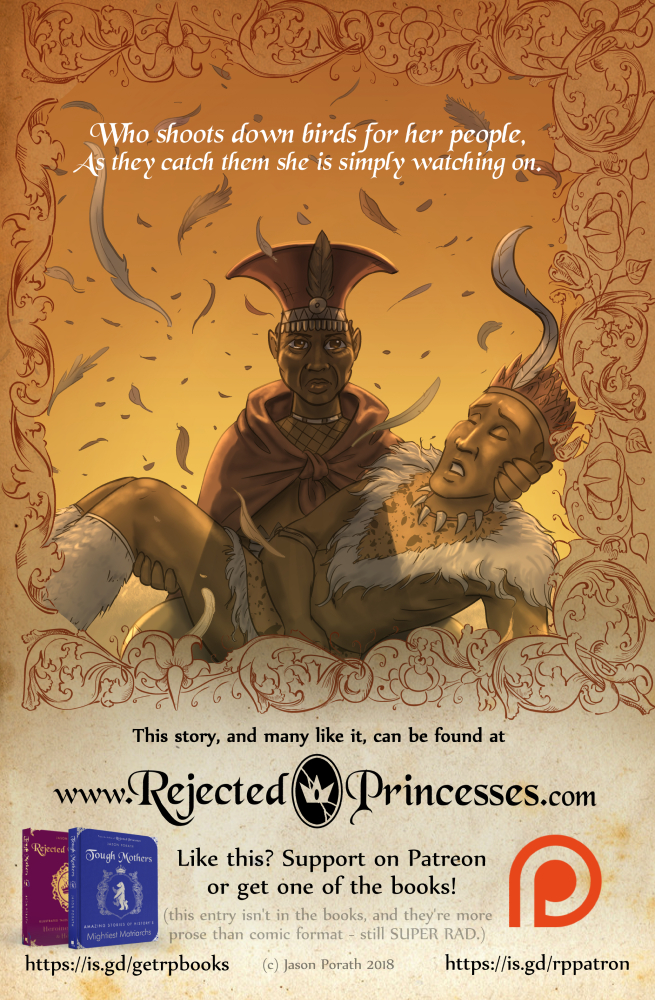 Father of guile!
Cunning one of the Hoshoza people,
Who devours a person tempting him with a story;
She killed Bhedu amongst the medicine men,
And destroyed Mkhongoyiyana amongst the Ngadini,
And killed Bheje amongst the diviners.
Morass of Menzi,
That caught people and finished them off;
I saw by Nohela son of Mlilo,
The fire-that-burns-on-every-hill,
For it caught him and he disappeared.
Beast that bellows at Sangoyana,
It bellowed and its voice pierced the sky,
It went and it was heard by Gwabalanda
Son of Ndaba of Khumalo clan.
Maid that matured and her mouth dried up,
And then they criticized her amongst old women.
Who shoots down birds for her people,
As they catch them she is simply watching on.
The opener of all main gates so that all people may enter,
The owners of the home enter by the narrow side-gates.
Sipper of others of the venom of the cobra,
The Mhlathuze River will flood at midday.
Little mouse that started the runs at Malandela’s,
And thought it was the people of Malandela
Who would thereby walk along all the paths.

This translation comes from James Stuart and Trevor Cope’s 1968 book Izibongo: Zulu praise-poems. Oxford, Clarendon Press. It was reprinted in the Maxwell Shamase paper listed in the “citations” section.

The idea here was of someone who grew up in the cast shadows of others, and would return to that in her death. The color yellow indicates times when things were going well, but the more crimson the scenes get, the more blood is being spilled.

Additionally, I wanted the whole thing to wrap up with some lines from her (pretty badass) praise poem. I saw her as someone who was willing to do for her people what others wouldn’t, and the “shoots down birds” line got to that better than anything else. Since the Zulu people adorn their clothing, especially their headgear, with feathers, I started planting feathers everywhere I could, so that the final image would have as much impact as it could.

Man, this was a tough one on you all! Only five got it right, and one of those forgot to leave their name!

This strong-willed twin took the reins of her country, despite having been blamed for virtually every misfortune to befall it since her birth. She did what she had to – including killing one of Africa’s greatest leaders.

Elidridge, Elizabeth. The Creation of the Zulu Kingdom, 1815:1828: War, Shaka and the Consolidation of Power. Cambridge, 2014.
Gumede, Henry. The Portrayal of Female Characters in Selected Zulu Texts.
Kubeka-Ngobese, Gloria Thandekile. Ukuziphatha nokuphathwa kwabesifazane : endulo namanje.
Masuku, Norma. The depiction of Mkabayi: A review of her praise poem.
Morrissey, Caellagh D. Fugitive Queens: Amakhosikazi and the Continuous Evolution of Gender and Power in KwaZulu-Natal (1816-1889).
Shamase, Maxwell Z. The royal women of the Zulu monarchy — through the keyhole or oral history: Princess Mkabayi Kajama (c.1750-c.1843).

Believe it or not, this Puerto Rican activist was sent to jail for the high crime of wearing pants. 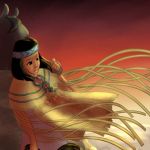 Wise Woman of the Apache