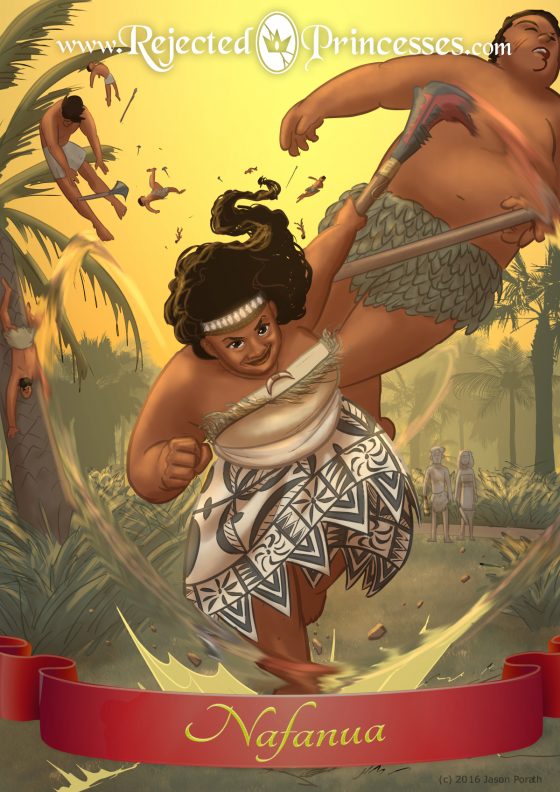 Chief Ta’i’i was in pain.

As leader of Falealupo, the westernmost village in Samoa, Ta’i’i had long fought to keep his village free. But after a seemingly-endless series of fights with warriors from the east led by the ruthless Liloma’iava1 These warriors were called Lea’ea-Sasa’e, while Ta’i’i’s were the Lea-‘ea-Sisifo. The two groups fought over the island of Savai’i, the largest in Samoa. However, I read in one source that the enemy forces may have actually been a combination of two tribes – it’s a little unclear to me, but most tellings simplify it to the Sasa’e, under Liloma’iava., Falealupo fell – and the retribution had been cruel. Ta’i’i’s people had been forced into slavery – and as if that wasn’t enough, they were subject to the cruel-and-unusual-in-equal-measure punishment of having to climb coconut trees upside down. Let us not say that Liloma’iava was not creative.

In response to his forced inverted climb, Ta’i’i let out a tremendous sigh – so tremendous that it reached all the islands of Samoa, and even made its way to Pulotu, the Samoan underworld. There, it found a sympathetic audience in the form of Ta’i’i’s brother, the lord of the underworld2 His name was Saveasi’uleo, and he was a human from the waist up, conger eel from the waist down. I am unsure how he had kids, but I suspect he looked super rad..

Protip: don’t pick a fight with the brother of a god.

Enraged, Ta’i’i’s brother dispatched his daughter, Nafanua3 Whose name translates to something like “hidden in the ground.” This is a reference to her birth, as she came out prematurely as a blood clot, and was buried in the ground, before emerging as a full-grown woman. From various readings, I gather this is meant to invoke the idea of stillbirth, miscarriage, or abortion. Which is a pretty powerful idea, and one to which I cannot think of a parallel in other mythology., to dispense justice. He instructed her to cut down the toa tree and fashion from it four weapons, each of which had specific functions (one was for fighting, one was for lending, one was only used in victory, and one was an oar that she used to drive her boat, so… not much of a weapon?)4 Lots more info on these weapons, along with translations and photographs (!), available from the National Parks of American Samoa website right here!.

Nafanua rowed to the shores of Falealupo, where, exhausted, she fell asleep on the beach. She was found by a couple, both of whom were named Matuna (so, you know, they were meant to be). Upon waking her and learning she was here to deliver them from slavery, the Matunas took her in as their adoptive daughter. They were a bit dismayed, however, that she was all alone. “There’s no more able-bodied men around to fight,” they said. “How are we going to do this?”

“Don’t you worry. I have magic weapons. Made ’em myself. I’ll loan one to you. We’ll do okay.”

“Just one thing, though.”

“When we’re fighting, you keep to your side of the road. Don’t chase folk over to my side. I have things handled. Got it?”

So they got to fighting5 In one version of the story, the Matunas tried rounding up people to help and were laughed out. In another, Nafanua summoned an army of dragonflies and cicadas to fight., and, true to form, Nafanua was mowing people down left and right – but politely. Literally: her weapon, Ta Fesilafa’i, translates to “to strike with courtesy.” However, the Matunas, overenthused at the prospect of finally kicking out the guys who’d mandated the upside-down tree boogie, chased one fleeing enemy across the road, violating Nafanua’s one and only rule. They were instantly killed by a swing of Nafanua ‘s weapon, and turned to stone. Bummer.

Nafanua chased the bad guys as far as a neighboring village, where she abruptly stopped when a gust of wind blew her shirt up, revealing she was a woman. This resulted in several immediate effects:

And thus the war ended. The oppressors surrendered, Nafanua was enshrined as one of Samoa’s most important guardians, and her name lives on to modern day, honoring a volcano, some churches, a Samoan police boat, and much more.

Getting the visual reference on this was tricky. As this article lays out better than I could ever do, much of the historical photo reference for areas like Samoa was purposely exoticized, with photos of bare-chested women in fetishized clothing were the norm. This was such a prevalent trend that the photo reference can’t really be trusted — so I tried to find historical depictions that matched with modern ones in a way that I could theorize a lineage of the clothing styles, and work from there. It may not be perfect, but I did my best with limited resources.

Her club is taken verbatim from the photo on the National Parks of American Samoa website.

The colorful plants and road are taken from a picture of the main road of Falealupo in modern day.

I will say that the idea for this entry came from being asked regularly in recent days about the upcoming Disney film Moana- which looks great, and I consider a gutsy move on Disney’s part, as it’s far from a guaranteed financial success. When one student asked in a Q&A about my feelings about Moana, I replied about a couple different templates for Polynesian and Micronesian femininity (including Riina), and that Disney had understandably chosen a more traditional, conservative route. But I figured, hey, if they’re literally inserting a demigod (Maui) into a kids’ movie, why not cover another goddess, for symmetry?

N/A – this was a stopgap entry, since I couldn’t find time enough to do the other one.

Finally got the right books – so we’re back to the old hint! If you already guessed this the first time I tried doing an entry, your guess still counts. :)

Two bitter rivals for the title of worst woman in Sydney, these gang leaders’ deeds were far from Devine.

Kwan, Jordan. “The Legend of Warrior Princess Nafanua.” Just Like Any Other Blog.

Lastly, I looked at this draft of the history of Nafanua by Caroline Sinavaiana, but as she explicitly states it’s a draft entry only, I did not rely on it, instead only presenting its finding as alternate versions in footnote form.

There is plenty more that I could write about the later impact of Nafanua and a number of other things, but I have to get on the road to get to the next book tour stop, so it’ll have to be saved for later.