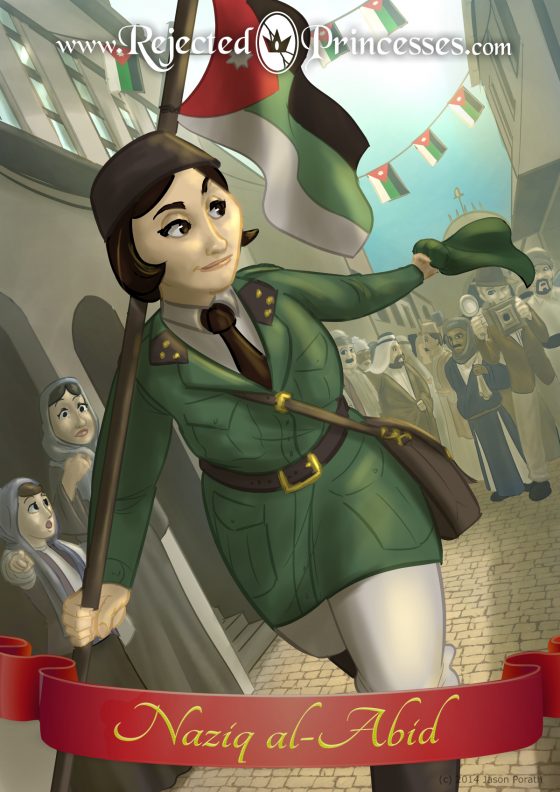 Naziq al-Abid had one of the best resumes ever: spoke five languages, started the Syrian Red Crescent (and half a dozen other organizations), first female general in Syrian history, and possibly held the world record for greatest number of times sent into exile. For what, you ask? Well, you’ll just have to read on to find out.

The first thing to know about Naziq is that she was fair-minded. The second is how much it got her in trouble. Exhibit A: she’s a young student in Mosul. She sees the Turkish teachers discriminate against Arab students (she’s Kurdish, so apparently didn’t get that herself). Her response? Organizing a mass protest to get the teachers fired. This resulted in her getting kicked out — of the school, of Mosul, of the entire country — and sent her back to Damascus.

For those counting, that’s exile number one.

Having now been kicked out of one country for agitation, she decided to try for a second by starting a womens’ rights club (the first in Syria) as soon as she got back. The club advocated for the right to vote… as well as Syrian independence from the Ottoman Empire. Cue the unamused powers-that-be kicking her (and her family) out of Syria. That’s two.

Well, the Ottoman Empire fell and she headed back to a Syria with a lot of questions on its mind. Newly-free after 400 years of being others’ subjects, Syrians wondered what issues to tackle first. Naziq, now 16, had an answer: give women the right to vote. Now. Right fucking now. Did you hear me? Now.

Again: unpopular opinion. How unpopular? I’ll let Ahmad Qudmani, high-ranking government official from the time, answer: “God created her with half a mind, how can we give her the right of political decision-making?”

…yeah. At least he didn’t pelt her with rocks (others did).

Nevertheless, she continued on her crusade, giving speeches and eventually meeting the US ambassador (without a veil!) to pressure the US for help (the ambassador, from his description, had a total crush on her). Soon suffrage got put to debate – had it passed, Syria might have given women the vote before the United States. Unfortunately, it didn’t, due to the French destroying the government.

The French, somewhat incensed at the idea of Syrians governing themselves, decided they owned the place. The Syrian king, realizing that his country was all of 4 months old and had no real army, surrendered to avoid mass bloodshed. His minister of defense, however, was all, “I ain’t going out like that!” Independent of the king, he scraped together a handful of decrepit weaponry and volunteers for a suicide mission, with the idea to go out with both middle fingers blazing. France had 9,000 well-armed troops. Syria had 1,500 untrained conscripts. One of them was a woman: Naziq.

“Most people supported me. I was off to battle, not to a cabaret!”

The image of her in military attire, sans veil, rifle slung over her shoulder, was in every newspaper. The articles called her “The Sword of Damascus” and “The Syrian Joan of Arc.” The reaction, in her words: “some were very critical, accusing me of blasphemy, but most people supported me. I was off to battle, not to a cabaret!”

The resistance predictably fell to the French (by some accounts, she, as a medic, was the only survivor) and you can guess what happened next: exile number three.

Two years later she was back, on the condition she give up politics. Technically, she did. Instead, she enabled other people to do her kind of work. She opened up her womens’ rights organization (Noor al-Fayyha, or “Light of Damascus”), co-administered a school for orphans, and started the Red Crescent (Syria’s version of the Red Cross). At some point, she pissed off yet another politician and was exiled to Jordan (that’s four).

She came back to Syria again, this time spending her time smuggling food and munitions to anti-French rebels, and caring for the wounded. During this time she also founded yet another womens’ society, because presumably the life of an outlaw was not actually keeping her busy enough. Eventually the French had enough, issued an arrest warrant, and she fled to Lebanon (that’s five – okay, technically she was fleeing arrest, but that’s still kind of an exile).

It’s in Lebanon that she met her future husband. She didn’t marry him until her forties, though, as she was too busy getting shit done.

By the time she died, she was back home, Syria was a free nation, women were joining the workforce, going out in public alone, and unveiling with abandon. A decade later, women began being elected to parliament. Regardless of what came later for Syria, for a period it made great strides towards equality, due in no small part to Naziq al-Abid: a woman born into every conceivable luxury, who traded it all to fight injustice.

I had a hell of a time researching this, as a lot of the material on her is in Arabic. Luckily my splendid friend Dina Abou-Karam was kind enough to help translate some of it.

Soraya Tarzi
1920s Afghanistan was a progressive and rapidly-modernizing country in large part to the most powerful, empathic, and maligned queen it had ever seen.

After her Cruel reign, I can see why Alex, the penguins, and the rest of the gang wanted to leave so badly.

Next: Ranavalona I
Prev: Gudit