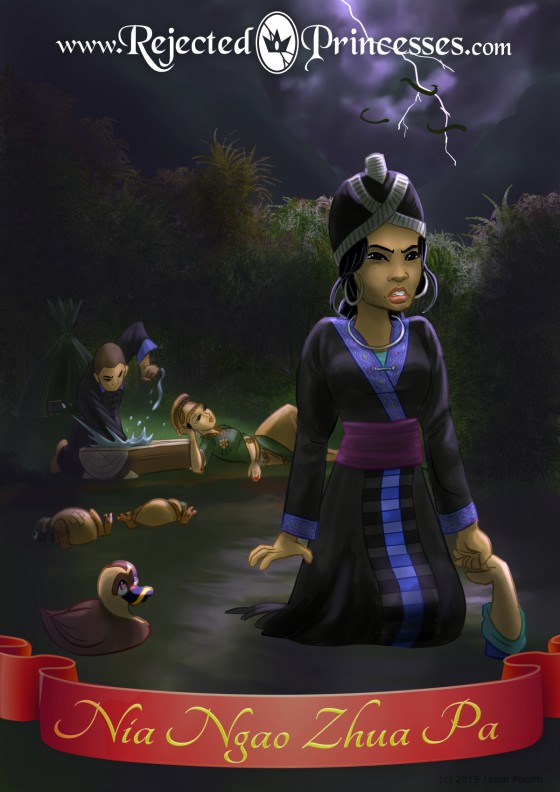 The legend of Nia Ngao Zhua Pa is supposed to serve as a code of conduct for Hmong girls, providing a story of a “good girl” versus a “bad girl.”

The end result, at least to non-Hmong ears, is a lot stranger than that.

The core story across all variations of the NNZP story (and there are many – the book I found spent 100 pages on just NNZP stories) is one of those “I’ve made a huge mistake” stories. In all versions, it starts with the male lead, Orphan Boy (who is not the world’s worst Mega Man villain, but instead the anonymous protagonist of many Hmong stories) meeting and romancing the titular Nia Ngao Zhua Pa. In each version, she demonstrates that she’s awesome in a way befitting traditional Hmong femininity:

You may notice that one of these things is not like the other. That’s Version 3. Version 3 is special.

She teaches the Orphan how to transform into a 12-horned buffalo in order to wrestle with her father.

Inevitably, after showing that she’s awesome, she settles down with the Orphan – who, by this point, has only shown his character by either helping an old lady, startling NNZP’s horse, or burning down a village (hello, Version 3!). They live a pretty nice and comfortable life, until a fly in the ointment appears. This is Nia Ngao Kou Kaw (NNKK).

NNKK is the classic pretty girl. She’s thin, wears fancy clothes, and has soft skin, while NNZP’s somewhat more muscular and has rougher hands from all her hard work. NNKK, seeing the Orphan’s now-baller house, worms her way in by telling the Orphan that NNZP secretly drinks sheep blood. Like, a lot of it. Nine bowls, in fact. In some versions, NNKK even smears her own menstrual blood on NNZP’s sleeping face in order to frame her. Eugh.

The Orphan – who, it must be mentioned, is never mentioned to be a smart man – immediately kicks out the otherwise angelic NNZP. This is not a quick process. You know how fairy tales like to repeat things three times? Cue NNZP telling the Orphan, at length, in triplicate, that he’s a god damned idiot and will regret his actions. Good ol’ Orphan Boy replies, “get out of here, I’m banging a new chick now!” three times, until she’s gone, like an inverse Beetlejuice.

Oh, and in about half the stories, she has a baby at this point. Nice going, Orphan.

NNKK, of course, turns out to be terrible. She’s lazy, burns rice, and lies around like an opium addict (a fact which the narrator harps on a *lot*). In Version 3, she is so lazy that, while chopping a tree, she actually climbs inside of the part she’s chopped up, so she can take a nap – and lays there so long that the tree grows around her and swallows her whole. This woman is Garfield’s god.

By this point, the Orphan has realized he done goofed, and sets out to win back NNZP. Except by this point, NNZP is in the clutches of a dragon, at the bottom of a lake, in a baller house. In most versions, she met and married the dragon after being dismissed by the Orphan. And because she is better off by virtually every conceivable metric, the Orphan sets out to liberate her from her life of peace and tranquility.

The Orphan, being unable to breathe underwater, enlists the help of some nearby frogs to drain the lake. They promise to do so if he doesn’t laugh at them as they swell up to gargantuan sizes from swallowing water. The Orphan laughs anyways, because he is kind of a jerk, and causes the frogs’ bellies to burst open repeatedly. Eventually they get it done, but the Orphan is not very helpful in this regard. Or almost any other.

After he meets NNZP on bent knee and begs for her to take him back, she tasks him with a secret mission. He’s to make 9 tubs of water, whose reflection he can use to see her flying around in the sky at night with her dragon beau. If it’s meant to be, she says, he can reach up and grab her from her flying horse, and she’ll be his forever.

The Orphan is so stupid he cannot grasp the concept of reflections.

So what does the Orphan do? Makes the tubs, sees her flying, and starts grabbing at the god damned water. Yes – this is a person so stupid that he cannot grasp the concept of reflections, and instead of looking up, just keeps confusedly hitting the water with his fists. In several versions, NNZP says “peace out,” drops their baby’s cap, and that’s the end of the story.

Version 3 is a bit more awesome, though. In that one, the Orphan, after far longer than necessary, realizes his stupidity, and manages to grab onto the tails of NNZP’s apron. This leads to the dragon-folk chasing them through the sky as the Orphan hangs on helplessly. NNZP fixes this scenario by using her weaving shuttle to shoot lightning at the dragons. This has led to some Hmong to say, upon seeing lightning, that “Nia Ngao Zhua Pa is weaving.”

My roommates can attest that this one was more difficult for me to draw than most. Given the huge number of things going on in this story, paring it down and making a single image – and figuring out how to portray NNZP – proved really difficult. I created a ton of different concepts and none really spoke to me. But I had a deadline, and several folk kept asking for a Hmong princess, so here you go.

Dab Neeg Hmoob: Myths, Legends, and Folk Tales from the Hmong of Laos by Charles Johnson and Se Yang (thanks to my brother for getting for me – it was hard to find!)

When fighting off invaders from her island home, this commander of the dawn made sure to look her best.