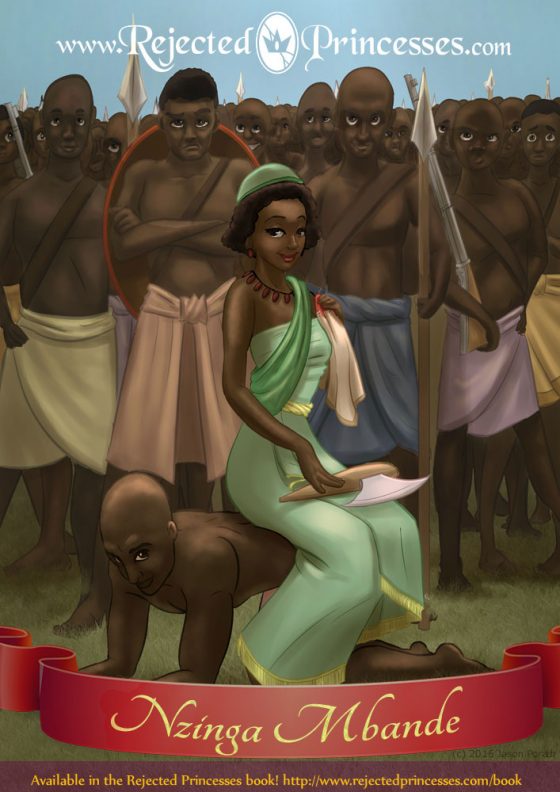 Nzinga Mbande began her political life as her nation of Ndongo (present-day Angola) was fighting off a Portuguese invasion. Her brother, a by-all-accounts wimp, seemingly could not bend over backwards far enough for the Portuguese, and once he ascended to the throne, the Portuguese just tossed him in jail and took over. Nzinga approached the Portuguese and demanded her brother’s return and that they leave Ndongo. At their meeting, in a sign of disrespect, the Portuguese offered her no chair to sit in, instead providing merely a floor mat fit for servants.

In response, Nzinga ordered one of her servants to get on all fours, sitting on her as she would a chair. After the negotiations concluded, according to some accounts (more on that later), she slit her throat in full view of everyone, and informed them that the Queen of Ndongo does not use the same chair twice. Shortly thereafter, the Portuguese agreed to let her brother go.

The Queen of Ndongo does not use the same chair twice.

With her brother now safely back home, she is said (again, more on that later) to have murdered him in his sleep, killed her brother’s son, and assumed the throne herself – because if you’re going to do something right, you better do it yourself. From there, she moved south, started a new country, conquered the infamous ruthless cannibal tribe known as the Jaga, began offering sanctuary to runaway slaves and defector soldiers, and waged war on the Portuguese for THIRTY FIVE YEARS.

Now, you may have noticed that I have repeatedly used words like “supposedly” and “according to some accounts.” As with many powerful historical women (as you’ll come to see as you read more of these entries), her story is a mixture of fact and fiction, with the two difficult to separate. That she met with the Portuguese and that she sat on her servant’s back is generally agreed by historians to be accurate. Furthermore, there is no doubt that she was a thorn in the side of the Portuguese, that she founded a new nation, or that she was a great leader.

Where it begins to fall to suspicion is in the more salacious rumors. While some report that she murdered her brother, others report that her brother committed suicide. Her slitting the servant girl’s neck and proclaiming her need for one-use chairs is likely hyperbole. Other outlandish rumors, to be taken with a brick of salt, include:

Fact, fiction, self-promotion, or smear tactics, it is hard to tell.

After Nzinga pushed down the Portuguese for decades (both militarily and economically, cutting off their trade routes), they eventually threw their hands up and negotiated a peace treaty. She died several years afterwards, at the ripe old age of eighty-one. There are statues of her all over Angola to this day.

Many people have (rightfully) been clamoring for citations on some of the more outlandish rumors here. I’ve wanted to hold off until I got to the actual origin of some of them, but I’ll release now what I have.

Nzingha Prescod
Nzingha is only 23 years old and already competing in her second Olympics. 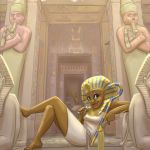