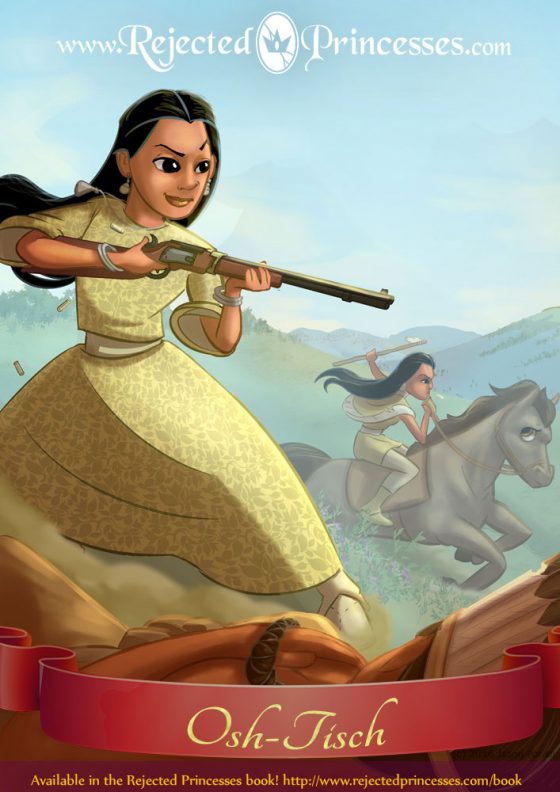 Meet Osh-Tisch, whose name translates to “Finds Them and Kills Them” in Crow. Osh-Tisch was an assigned-male-at-birth woman and was one of the last of the Crow Nation baté (Two Spirit spiritual leaders [what’s a Two Spirit?])—oh, and you can be sure, she earned her name.

She is also far from the only awesome lady in this story.

As a baté, Osh-Tisch lived apart from the main area of the camp and had duties ranging from artist to medicine woman to shaman. She was not just any baté—she was the baté leader. Head baté in charge. Contemporary accounts described her as quietly dignified, almost regal.

But during the incident that earned Osh-Tisch her name, she was not acting in her traditional roles at all. Instead, she had taken up arms with her male brethren and gone to war against the Lakota. This act, while not unique in the history of Two Spirits according to Native American historians, was so incredibly rare that this author has yet to find a similar story elsewhere.

Osh-Tisch’s bravery would have been largely forgotten were it not for a Crow woman named Pretty Shield who spoke of it many years later. While recounting details of the Battle of the Rosebud (a battle in which the Crow fought in a coalition led by the US Army against the Lakota and Cheyenne tribes), Pretty Shield leaned forward and asked:

“Did the men ever tell you anything about a woman who fought . . . on the Rosebud?”

Surprised, the reporter replied, “No.” Pretty Shield chuckled, remarking that the men “do not like to tell of it.” She went on to tell a story of not just one but two take-charge women on the battlefield.

During the battle, a Crow warrior was wounded and fell from his horse. Sensing an opportunity, the Lakota charged forward to collect his scalp. In response, Osh-Tisch jumped off her horse, stood over him, and started shooting at the approaching Lakota “as rapidly as she could load her gun.”

Meanwhile, a second woman named The Other Magpie started to scream to create a distraction. Unlike Osh-Tisch, The Other Magpie (described as pretty, brave, wild, and unmarried) had no firearm. Instead, she had a stick. Not even a particularly good stick either: this was a coup stick.

What’s a coup stick, you ask? Well, the supremely brave (and possibly crazy) among certain Native American tribes would use decorative sticks in battle instead of weapons. These were coup sticks. For each hit scored, they’d rack up points and prestige in the world’s most extreme game of tag. Hit enough people and your coup stick got to be pretty dang fancy. The Other Magpie’s was not fancy. It was a stick with a single feather tied to it.

The Other Magpie, furious because her brother had recently been killed by the Lakota, rode into war with a simple coup stick at her side. Riding straight at the Lakota, she alternated between waving her stick wildly, spitting at them, and yelling, “My spit is my arrows.” Yeah.

With the Lakota distracted by this utterly bizarre sight, The Other Magpie hit one of them with her coup stick. A second later, the same guy was dead from Osh-Tisch’s bullet, as if The Other Magpie was some sort of supernatural harbinger of death. This act earned Osh-Tisch her “Finds Them and Kills Them” moniker. As the surviving Lakota gave up their scalping mission and scattered, The Other Magpie dismounted and scalped the newly dead Lakota in return. In the end, it was one of only 10 scalps collected by the Crow during the battle. The Other Magpie cut it into many pieces, so that more people could join in the post-battle ceremonial dancing back at camp.

In the years following the Battle of the Rosebud, the Crow were confined to reservations, and it is here that the story starts to get sad. The various missionaries and government agents who visited the reservations were not okay with Two Spirits or anything they considered deviant—which is to say, everything save missionary position with your wife with the lights off. In the late 1890s, this attitude reared its head when an agent named Briskow imprisoned Osh-Tisch and the other batés. He cut their hair and made them wear men’s clothing. Various Crow described this as “crazy” and “a tragedy.”

The Crow Nation, however, rallied around Osh-Tisch. The tribal leaders did not hold much sway at this point in time with the US government, but they threw their full weight behind her and demanded that Briskow be fired. In short order, he was gone. To the Crow of the time, Osh-Tisch’s nature was not only completely accepted but even celebrated.

Unfortunately, harsh treatment from whites was not at all uncommon during this time, and a great many Two Spirits from other tribes ended up committing suicide after being forced into binary gender roles. A Lakota man described the treatment thusly: “I heard sad stories of winktes [Lakota Two Spirits] committing suicide, hanging themselves rather than change . . . after that, those who remained would put on man’s clothing.”

The handful of recorded interactions with Osh-Tisch support that. In every case, her white contemporaries (who usually referred to her as “him”) would ask her questions like why she wore women’s clothes. She’d reply that she was “inclined to be a woman, never a man.” When they asked what work she did, she said, “All woman’s work,” and, with no small amount of pride, produced an ornate dress she’d made. Her entire life she tried to explain and normalize what and who she was. Under her leadership, a quiet intertribe outreach effort began to emerge, linking all the different tribes’ Two Spirits in secret communication in an attempt to facilitate understanding.

Sadly, her efforts were for naught. She is one of the only Two Spirits whose name and story survives to the present day.

After Osh-Tisch died in 1929, the restrictive moral code of Western missionaries took hold in the Crow Nation and became internalized. With no others to take up the role of baté, the institution died out, and its ancient knowledge with it. This happened across almost all Native American tribes. Even though there has been a modern movement to reinstitute the idea of Two Spirits among the tribes, it has been met with great resistance. Modern-day Two Spirits suffer persecution and hate crimes even by members of their own tribe. While everyone agrees that Two Spirits existed, the tradition, wisdom, and acceptance of these roles has been lost to history. It is important to remember and to honor them.

So here’s to Osh-Tisch: a bridge between genders, between worlds, between tribes.

A Note on The Term “Two Spirit”

Two Spirit is a term likely to trip up a lot of people. Virtually all Native American tribes subscribe to the idea of more than two genders, encompassing identities such as women born as men and vice versa, as well as homosexual, pansexual, and asexual people and the like. “Two Spirit” is most closely analogous to “transgender,” but it’s not a direct synonym and should not be used in this case, as many Two Spirits take exception to being lumped under, or appropriated by, the term “transgender.” So that word’s out.

Back in the day, Two Spirits were referred to as berdache. This is a term that absolutely nobody should ever, ever use, as its origins are somewhere between the French word for “male prostitute” and the Persian word for “slave.” You’ll find it a lot in old literature on the subject, but that word’s definitely out.

Earlier online drafts of this entry used the terms “male-bodied” and “female-bodied,” which some find troublesome, so those are out too. Subsequent drafts used “biologically male-sexed,” which some still didn’t like. The preferred term as of this writing is “assigned male/female at birth”—which, unfortunately, may not be accurate in this case. Not all native tribes assign gender at birth (some wait as late as four years old), and there’s no evidence that Osh-Tisch was ever assigned male by her tribe. However, given that most native children were assigned gender at birth, it seems reasonable to use that language.

Lastly, since each tribe has totally different numbers, kinds, social roles, and even words for said genders, many take exception to even being lumped under the umbrella of Two Spirit. So that word would arguably be out, except there’s really no other word to use for the phenomenon.

And lastly, as regards my use of the pronoun “she” to describe Osh-Tisch: that is, as best I can tell, how Pretty Shield referred to her, so I am deferring to that.

Clarifying the language on Two Sprits: round two!
Ever been curious as to the upbringing of Two Spirits in Native American cultures? You should probably read this.

Two Spirits in the Venezuelan Jungle

One of the greatest ransoms in history.