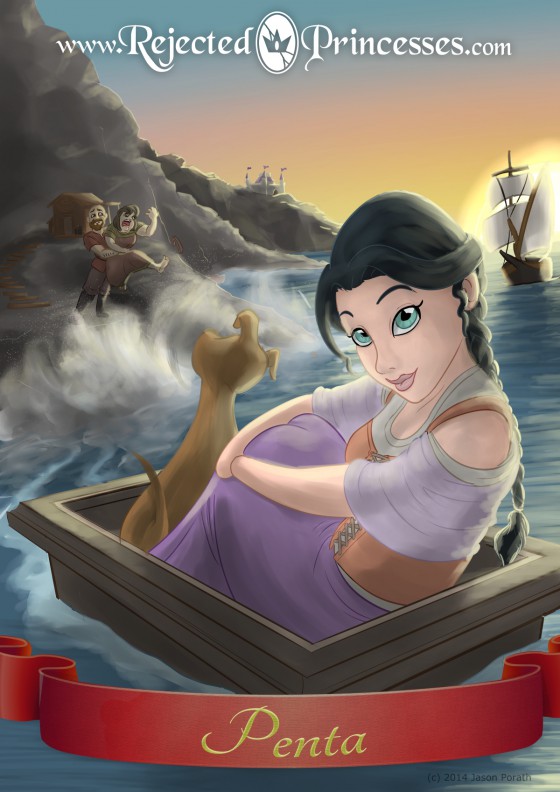 Most everyone knows that the commonly-reproduced versions of fairy tales are a far cry from their horrific origins. Cinderella’s stepsisters cut off their heels to fit in their shoes, Rumplestiltzkin tore himself in half when he was found out, the little mermaid commits suicide. But some are just too messed up to even approach re-telling, and such is the case of the first fairytale Rejected Princess: Penta of the Chopped-off Hands.

Penta grew up as royalty, sister to the king. When the king’s wife died, he spent some time looking for a new wife, but could not find anyone equally beautiful — except for Penta. So he decided, you know what, screw it, I’m the king, and I’m gonna marry my own sister.

“I’m the king, and I’m gonna marry my own sister!”

Penta set about trying to dissuade the king from this course of action. She asked what attracted him to her so much, and he answered, “your hands.” So she ordered her servant to chop off her hands and bring them to her brother, the king, on a platter.

The king was not amused. In return, he stuffed her in a trunk and tossed it in the ocean.

She floated around for a while, somehow not dying of blood loss, until she was found by a kindly fisherman. But the fisherman’s wife, Nuccia, was having none of it, and promptly tossed Penta back in the ocean.

This time, Penta washed up on the shore of the Green Earth king’s lands, where she quickly became the queen’s servant — somehow expertly tending the queen’s hair with her feet. The queen died soon thereafter (seemingly unrelated to Penta foot-wielding scissors near her face), and said, “hey Green Earth King, you should marry Penta, she’s pretty cool.” So he did, thus fulfilling Penta’s bizarrely recurrent destiny as a backup wife.

Soon thereafter, the Green Earth King went sailing, and while he was out, Penta had a kid, presumably his. His servants sent word to him on a boat, but somehow it was intercepted by the fisherman’s wife, Nuccia. For reasons unknown, she changed the note to say that Penta had given birth to a dog. The king was apparently cool with this, and wrote a letter back saying, “hey, shit happens. Tell her it’s cool.” And again, Nuccia changed the letter, this time to say, “a dog?! Jesus! You know what, you should just kill Penta. Kill her! I ain’t havin’ no dog-baby!”

The Green Earth King’s counselors were more than a bit suspicious of the letter, but, wanting to obey, banished Penta (and child) instead of straight-out killing her. She wandered off, and ended up hanging out with a sorceror, who was impressed by how shitty her life story was. The sorceror decided to have a pity party competition, and invited people all the world around to come to his castle and tell stories about who has the crappiest life.

Well, Penta’s brother, still on his woe-is-me kick, shows up and tells his story. The Green Earth King shows up and tells about how he lost his one true love due to some interfering shrew of a fisherman’s wife (whom, it should be mentioned, the king had by this time ordered to be covered in wax and set on fire).

The sorceror realized who the two were, and reunited them with Penta. The story ends with the sorceror magically regrowing her hands, and leaves off the part where she no doubt started strangling her brother in full view of everyone.

“Handless princess” stories are so common I could do an entire calendar of amputee fairytale girls.

Now, surprisingly, this sort of fairytale — women with chopped-off hands — is so common that it actually has its own classification (Aarne-Thompson type 706B). Other variants include:

– Her father trying to marry her instead of her brother (gross)

– Her brother chopping off the girl’s hands because he thought she’d murdered his baby (when in reality the brother’s insanely jealous wife had done so – after breaking all their furniture, killing his horse, and blaming it all on the now-handless sister)

– Her stepmother chopping off her hands and gouging out her eyes (also in this one, she was born alongside a talking snake)

…it goes on. I could seriously do an entire calendar of amputee fairytale girls.