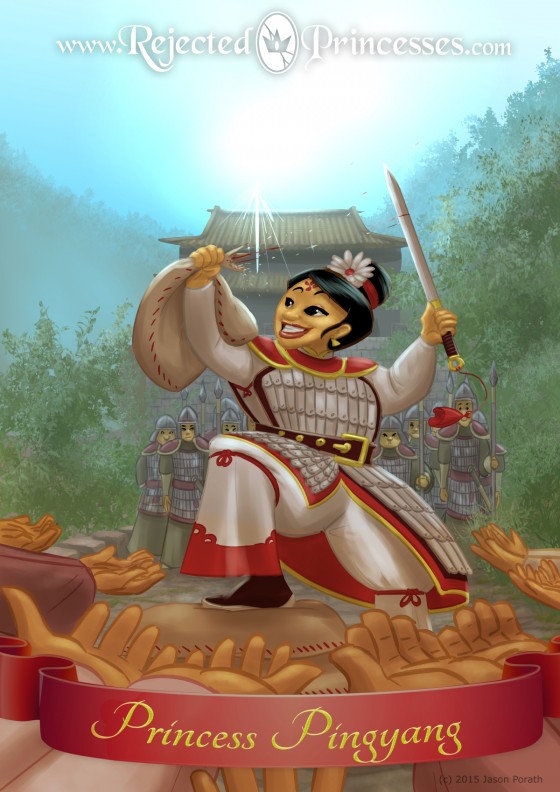 Back in the 600s, China was under the rule of a real dickbiscuit named Yangdi. This guy made so many jackhole moves it’s downright impressive:

Yangdi’s reckless violation of OSHA standards, accompanied with his policies of overtaxation and wide-ranging conscription, achieved an impressive feat: again uniting the fractured country under one banner. This time, though, said banner was hatred towards Yangdi. By the end of his reign, the Sui dynasty would be toppled, after only two rulers.

And one of the people doing the toppling? Our girl Pingyang, leading 70,000 soldiers she’d gathered herself.

“I have ways of taking care of myself.”

Pingyang was daughter of a military commander named Li Yuan. In her early life, she was, by all accounts, a dutiful daughter and loving wife. She was only set on her path to unrepentant asskicker by, you guessed it, yet another one of Yangdi’s boneheaded moves.

In 617, fearing Li Yuan’s general competence, Yangdi ordered Li Yuan to be imprisoned on trumped-up charges. Yangdi then immediately rescinded this order when it became evident that he needed Li Yuan to guard him from some other people who were trying to overthrow the government. This implementation of Schrodinger’s Jail Sentence did not prove the stroke of managerial genius that Yangdi had wished, and soon Li Yuan, too, was plotting to kill Yangdi.

This move left Pingyang in immediate danger. As the wife of the head of the palace guards, she was a very visible figure to the paranoid Yangdi, and could easily be taken hostage. This danger only intensified when her husband left to join Li Yuan. Fearing it would be too dangerous for them if they both left the palace at once, she volunteered to stay behind a while. “As a woman,” she told her husband, “it is easy for me to hide when the time comes. I have ways of taking care of myself.”

“As a woman, it is easy for me to hide when the time comes. I have ways of taking care of myself.”

Soon thereafter, she snuck herself out of the palace and made her way to her family’s lands by her lonesome. There she found the common people were suffering from a drought, and had been largely forsaken by the government. Sensing an opportunity, she threw open her family’s storehouses and gave out food. The locals were so grateful that many pledged fealty to her. This was the start of what would come to be known as the Woman’s Army1 Although it seems that she was possibly the only woman in it. No others are reported in the history books – but this is the country that birthed the legend of Hua Mulan, so take from that what you will..

Over the next several months, as her father and husband warred openly against Yangdi, Pingyang quietly made political alliances to grow her own army. Her ranks eventually swelled up to 70,000 people, all under the banner of a woman. She instituted a strict code of conduct, not unlike that of previous-covered pirate Ching Shih: no looting, no raping, no pillaging. Anything soldiers took, they had to pay for. After victories, the army distributed food among the locals. It’s little wonder that wherever they went, they were greeted as liberators rather than conquerors.

After less than a year of fighting, in which Pingyang’s army routed and contained Yangdi’s forces, the Sui dynasty fell and Yangdi fled2 Yangdi was strangled in a bathhouse a year later. Before fleeing his opulent palace, he’s reported to have gazed at himself in a mirror and said, “Such a fine head. Who will be the one to hack it off?” It is the position of this author that any film adaptations of Yangdi should make him look like a Final Fantasy villain.. Li Yuan took the throne, ushering in one of China’s golden eras with the establishment of the Tang dynasty. Not only did this make Pingyang an official princess, but also conferred on her a number of honors. She was appointed marshall, which brought with it military aides and a staff, and she was given the title of zhou (wise).

The Tang would be a long-lived dynasty, with one minor hiccup to come from a woman born the year after Pingyang’s death. That woman would be become concubine to Pingyang’s brother and eventually work her way up to declaring herself emperor: she was the infamous (and previously-covered) Wu Zetian.

Pingyang herself unfortunately lived a short life thereafter. She died at age 23 of unknown causes (maybe childbirth), and was mourned far and wide. Niangziguan pass in Pingding country was dubbed “Young Lady’s Pass,” to honor her defense of it. Her father ordered that military music be played at her funeral, which provoked some controversy. One advisor remarked, “in antiquity, martial music was never played at the funerals of women.”

Her father replied, “the princess carried battle drums and assisted me in my quest for the throne. Was there ever such a one as she in antiquity?3 The answer is, of course, yes. Aside from the legend of Mulan, which had already become somewhat popular by that point, there was Fu Hao from roughly 1800 years prior, warrior Sun Shangxiang in the 3rd century, city defender Li Xiu in the 4th, and that’s before we get into heroines of neighboring countries. China does not want for badass heroines.”

Many of you guessed Wu Zetian on this one… silly goose, I’ve already done an entry on her! :D You were probably thrown off by me publicly discussing an update on her entry a while back, but still — she didn’t quite fit the clue (although she was a close guess)!

Some women are princesses by birth. Some marry into it. This one took a less appetizing, frankly tangy path to her tiara: toppling a dynasty to start a new one.

I also used the Wikipedia entry on Yangdi just to corroborate some of the claims made by my other sources – so that part is a bit more thinly sourced than the rest.

Get your skirt short, your boots strong, your jewels banked, and your revolver cocked.