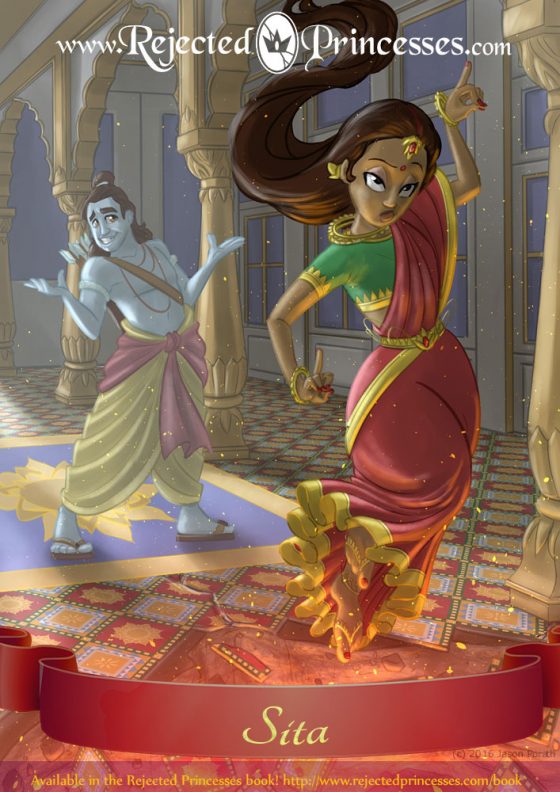 You are beholding the pinnacle of Indian femininity: Sita, from the Ramayana.

For those unfamiliar with the Ramayana, it’s an incredible (and incredibly long) work of Indian mythology — so here’s a condensed version. For 90 percentof the book, it’s basically Mario/Princess/Bowser by way of Tarantino. Bad guy (Ravana) kidnaps princess (Sita), good guy (Rama) goes on bloody rampage for years in order to get her back. Kills Ravana, gets back the princess, yay for everyone.

About 5 pages after they get back, cut to Rama talking to his advisors.

“Advisors,” he says, “what are the people saying about me?”

“Oh man, Rama, they totally love you. Way to rock it with killing that demon guy.”

“Wait, EVERYONE loves me? No way. There’s gotta be SOMEONE who’s not on board.”

“Well, I mean, there’s some knucklehead…”

“He’s saying that Sita totally hooked up with the bad guy, but, I mean, he’s a knucklehead.”

“Wait, what? People are saying that? Oh crap. Hey Sita! Baby, I’m sorry, I can’t be seen with you. Some guy is saying you hooked up with Ravana. Now, I know you’ve passed like, my hundred other purity tests, but still. You should go live in the forest for the rest of your life.”

She then goes into exile – pregnant with their kids.

Cut to many years later, Rama’s having a festival, and some awesome guys show up. They wow everyone, and Rama’s like, “oh hey, who are YOU guys? You’re awesome!” They’re like, “SURPRISE! We’re your kids! Also, Sita’s alive and in the forest.”

Rama: “Oh snap! Yeah, that whole thing with Sita was totally my bad. Hey, can we get her in here? I got some smoothing over to do.”

Sita shows up, and is like, “no, guys, it’s cool! Hey, I’ll settle this once and for all. Everyone listening? Okay, so if I did NOT hook up with the demon guy, may the earth swallow me whole.”

If I did NOT hook up with the demon guy, may the earth swallow me whole.”

Now, that’s the overview, but if you go in depth, there’s more at play here:

Even taking all of that into account, this author still holds that the reading of “I’d rather jump into a pit of lava than be with you” is a valid one. Your mileage may vary.

Ravana’s kidnapping plot all began when Ravana’s sister, a demon named Shurpankha, unsuccessfully hit on Rama’s brother — who promptly cut off her nose when he refused her and things escalated. Shurpankha then tells Ravana, who first swears revenge. She goes on to tell him about Sita and how attractive she is, and Ravana gets ideas. Gross ideas.

…and it goes on. The standard version of the Ramayana is around 600 pages long, and there’s a lot worth reading in there. Characters turn night to day by piercing the sky with arrows, one of the bad guys has a chariot pulled by snakes, and a monkey leaps across the Indian subcontinent while carrying a mountain on its back.

If you’d like to see an animated version of Sita’s life, you’re in luck — there is an independent short movie called Sita Sings the Blues that is available to watch for FREE online. You should go check it out, it’s pretty great. [thanks to the 10,000 people who emailed to remind me of this.

Thanks to Varun Rana, Shubha Ashok, and Annesha Das for holding my feet to the flame and insisting I don’t gloss over the details!