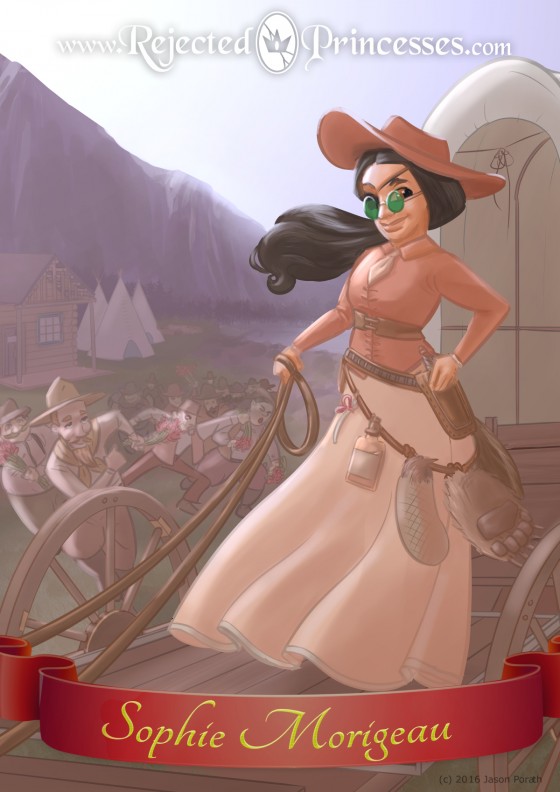 It’s easy to forget how much Sophie Morigeau had working against her. For when you look at her successful businesses, her hard-earned wealth and property, and her long succession of husbands, you could think she just skated through life. But when you see her one eye, her self-amputated rib, and realize she was a Métis1 A term referring to people who are part First Nations, part French settler, and live in what is today Canada. woman in the super-racist days of the frontier, you start to see how hard she fought to live her wild life.

Sophie’s irregular childhood taught her early on to present whatever identity would be most advantageous to her audience. Raised in a mixed community of fur traders — some white, some native, some mixed, some blood relations, some not — Sophie saw how her community would change who it chose to represent itself, depending on who they were trading with. In the same way, Sophie would come to claim multiple fathers throughout her life. To white people, she was the daughter of a quarter-Cree woman and Frenchman Francois Baptiste Morigeau. To the native people, her father was Patrick Finley, a man of Chippewa, Scottish, and either Salish or Spokane descent.

(the truth is probably that Finley was her dad and Morigeau her stepdad, but even that’s guesswork on the part of historians.)

While many women of her era would have their life’s adventures curtailed early on by marriage, Sophie was different. Although married off at 16 years old, Sophie apparently just up and left the marriage a couple years in2 There’s frustratingly little information on this. Initial reports describe her as happy with her handsome white husband — Jean Baptiste Chabotte, 24 at the time of the marriage. Government census forms list them married and cohabitating in 1860. But at some point thereafter, they just stopped being together, and she started using her maiden name again. to start running a trade route to local gold miners. Splitting from her husband would prove just the start of a long lifetime of calling the shots, business-wise and romantically.

Emboldened by her work with the miners, she bolstered her business empire by claiming land in her own name — making her one of the first women in Canada to do so. By her early 30s, she had a small trading outpost with a log-and-mud cabin she apparently built in large part by herself. She employed numerous Kutenai in making supplies, looking after horses, and even prospecting for gold nearby.

Throughout this period, she had a ludicrous number of adventures, almost all of which we only know about second-hand. She lost one eye when hit by a branch while riding a horse, and so wore an eyepatch and/or green spectacles most of the rest of her life. After an accident with a runaway horse and buggy, she amputated her own protruding rib — and proceeded to hang it up in her cabin with a little pink bow.

“She seldom lacked for masculine company if she so desired and had numerous men partners over the year; some outsmarted her and some merely tried, winding up extinct.”

But her life was nowhere more wild than in matters of the heart. One historian described her thusly: “She seldom lacked for masculine company if she so desired and had numerous men partners over the year; some outsmarted her and some merely tried, winding up extinct.” The surviving stories corroborate this. One described her long string of white suitors as men who “occupied the position of husband,” and noted that “whatever husband she has on is not allowed to interfere with anything, only to do what she tells him.”

Misbehaving suitors would often find themselves worse for wear. One oral history began by saying Sophie had “just given her 13th husband notice to quit… her last having refused to do so, got shot for his pains.” The shooter in this instance — Sophie, or a new beau? (as was often the case) — is not identified. Gunfire was not the only fate that awaited them, however. A later paramour named Tom Clark proved mean and controlling, lashing out at those around him and trying to isolate her from the community. He was later found to have mysteriously drowned.

Her attitudes towards race prove difficult to decipher from a modern standpoint. In the company of other Métis, she would refer to herself as one of the “only white women on the Plains.” She kept a separate washing-up place for Native Americans, and made sure they used it. At the same time, she looked after local tribes, employing and feeding large numbers of them — she had standing teepees on her land, and Kutenai children were always coming by. Moreover, upon witnessing one of her neighbors discarding candy offered by the Kutenai (on the grounds that it was too dirty), she became furiously angry with the neighbor, which led to a years-long rift between the two3 In some oral histories, Sophie herself was the one to give the candy, although this seems to be the less-accepted version..

“Hers was a colorful, zestful life, which if written in full, would outsell any modern novel.”

Late in life, Sophie took some severe financial hits when a rough winter killed off much of her livestock. She was further struck when several paramours and business partners robbed her of money. In her twilight years, she put her affairs in order, hired live-in caretakers, and died peacefully at eighty years old. Of her, one obituary wrote, “Hers was a colorful, zestful life, which if written in full, would outsell any modern novel.”

Almost a clean sweep this week!

The only use this Canadian badass had for pretty pink bows was to adorn her own rib — which, after amputating it from her own body due to an accident, she used to decorate her cabin.

Breaking one of my rules here by doing a more modern figure, but she’s just too cool. Here’s your hint:

Look out, Babe and Lou, she’s dropping you fast.